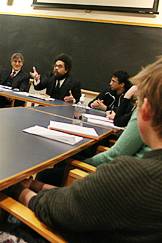 Cornel West discusses the work of 16th-century Protestant reformer Martin Luther with his co-instructor Robert George and students in the freshman seminar "Great Books: Ideas and Arguments." West and George, two of Princeton's best-known public intellectuals, devised the course to draw students into their debates on the ideas of classical, medieval and modern thinkers.

At left: From left, freshman Fatu Conteh engages in discussion with George and West during a class session. Conteh said the professors' "conversations with us have always been enlightening and thought-provoking."

The Princeton Weekly Bulletin featured stories on two freshman seminars, both focusing on the intersection between art and science, in its Nov. 20, 2006, issue. The April 9, 2007, issue includes stories on four more seminars -- these a little more wide-ranging in their subject matter. Freshmen this semester are discovering the excitement and challenge of working in a small-group setting with faculty and fellow students on topics such as great books, the chemistry of chocolate, black music and the DNA/iPod connection. These are just a sampling of the 70 courses offered during the fall and spring semesters through Princeton's freshman seminar program. This year, some 950 freshmen -- nearly 80 percent of the class -- have enrolled. Almost universally, students say that their freshman seminar was one of their best academic experiences at Princeton and that they form their most enduring intellectual friendships with fellow students in the seminar.

As two of Princeton's most prominent public intellectuals on opposite sides of the political spectrum, Robert George and Cornel West might seem to be an unlikely team to lead a freshman seminar.

That notion, however, is quickly dissolved by watching George and West engage their students and each other in "Great Books: Ideas and Arguments," a seminar that grapples with virtue, truth and justice through the works of thinkers ranging from Sophocles and Plato to W.E.B. DuBois and Aleksandr Solzhenitsyn.

George, the McCormick Professor of Jurisprudence and director of the James Madison Program in American Ideals and Institutions, is a vocal political and social conservative and a bioethics adviser to President Bush. West, the Class of 1943 University Professor of Religion, is a forceful Bush critic and a ubiquitous commentator on race and class issues in America. But for both men, the "Great Books" seminar illustrates their own intellectual friendship and the value of "paideia," the Greek tradition of community-building through open and vigorous dialogue.

"It's our calling as teachers," West said. "One of the things we do share is a profound commitment to paideia for ourselves as well as students. It's very important for us, very important for the course, and it's a joy to be able to enact that."

Fatu Conteh, one of 15 freshmen in the seminar, said, "Professor West and Professor George's conversations with us have always been enlightening and thought-provoking. I especially like the way they encourage us to question and challenge these authors and their ideas. In addition, it is always a delight to see both Professor West and Professor George engage in such interesting exchanges. … I have learned a lot about humanity, in terms of our beliefs and values, and myself."

During a recent session, George and West led a discussion of Martin Luther's 1520 treatise "Babylonian Captivity of the Church," a central document of the Protestant Reformation. They operated smoothly as a team, drawing out questions and comments from the students as they examined Luther's discontent with the Catholic Church while touching on issues of free will, individualism, atheism, democracy and dialogue.

"So many of the issues that we've seen in the past few weeks, which really come to a head with Luther, are about how to pull together tendencies in opposed directions," George noted to the class. "The challenge -- and in every case it seems so difficult -- is to hold them both, not with a kind of pragmatic compromise but with a principled, rationally defensible way of having both: understanding God as both transcendent and immanent; understanding humans as free but with limited options; understanding the need for democratic participation in decision-making but also … for structures that have authority. It seems so difficult for us frail human beings to avoid going to one extreme or the other."

West added, "Democracy is the practice of giving and answering reasons -- it's dialogical. I'm not going to listen to you and accept what you have to say because of where you were born or what color you are or what your class origins are or who your mother and father are. I want to know the quality of your argument."

That sentiment also reflects how the professors developed their relationship and the seminar after West interviewed George in 2004 for the student-run Green Light magazine.

"We spent a couple of hours kicking back and forth, arguing," George recalled. "Then the tape ran out and we spent two more hours still going at it. Then we argued our way down to my car. Then we stood by my car for a half-hour and argued. Finally, we had to go get some dinner -- we were exhausted."

They began to meet regularly and decided to take their debates into the classroom for a seminar that examines "books that had been meaningful and important in our own intellectual odysseys," George said.

"These writings are not pieces in a museum called the History of Ideas," he said. "We want to engage the authors -- Plato, Aristotle, Marx, Luther, Sophocles, Augustine -- and to consider the contemporary relevance of their works. We want to argue with them, to wrestle with them and to learn from them."