A Princeton University research team has demonstrated that all sweeteners are not equal when it comes to weight gain: Rats with access to high-fructose corn syrup gained significantly more weight than those with access to table sugar, even when their overall caloric intake was the same.

In addition to causing significant weight gain in lab animals, long-term consumption of high-fructose corn syrup also led to abnormal increases in body fat, especially in the abdomen, and a rise in circulating blood fats called triglycerides. The researchers say the work sheds light on the factors contributing to obesity trends in the United States.

"Some people have claimed that high-fructose corn syrup is no different than other sweeteners when it comes to weight gain and obesity, but our results make it clear that this just isn't true, at least under the conditions of our tests," said psychology professor Bart Hoebel, who specializes in the neuroscience of appetite, weight and sugar addiction. "When rats are drinking high-fructose corn syrup at levels well below those in soda pop, they're becoming obese -- every single one, across the board. Even when rats are fed a high-fat diet, you don't see this; they don't all gain extra weight." 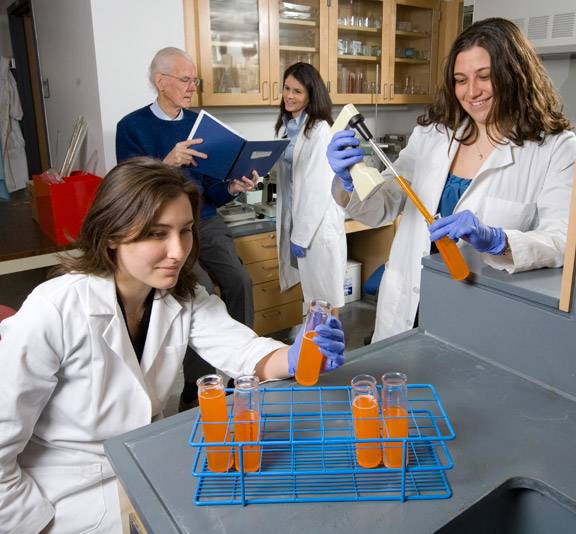 A Princeton University research team, including (from left) undergraduate Elyse Powell, psychology professor Bart Hoebel, visiting research associate Nicole Avena and graduate student Miriam Bocarsly, has demonstrated that rats with access to high-fructose corn syrup -- a sweetener found in many popular sodas -- gain significantly more weight than those with access to water sweetened with table sugar, even when they consume the same number of calories. The work may have important implications for understanding obesity trends in the United States. (Photo: Denise Applewhite)Photos for news media

In results published online Feb. 26 by the journal Pharmacology, Biochemistry and Behavior, the researchers from the Department of Psychology and the Princeton Neuroscience Institute reported on two experiments investigating the link between the consumption of high-fructose corn syrup and obesity.

The first study showed that male rats given water sweetened with high-fructose corn syrup in addition to a standard diet of rat chow gained much more weight than male rats that received water sweetened with table sugar, or sucrose, in conjunction with the standard diet. The concentration of sugar in the sucrose solution was the same as is found in some commercial soft drinks, while the high-fructose corn syrup solution was half as concentrated as most sodas.

"These rats aren't just getting fat; they're demonstrating characteristics of obesity, including substantial increases in abdominal fat and circulating triglycerides," said Princeton graduate student Miriam Bocarsly. "In humans, these same characteristics are known risk factors for high blood pressure, coronary artery disease, cancer and diabetes." In addition to Hoebel and Bocarsly, the research team included Princeton undergraduate Elyse Powell and visiting research associate Nicole Avena, who was affiliated with Rockefeller University during the study and is now on the faculty at the University of Florida. The Princeton researchers note that they do not know yet why high-fructose corn syrup fed to rats in their study generated more triglycerides, and more body fat that resulted in obesity. 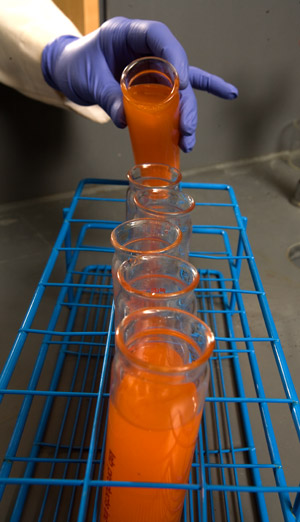 When male rats were given water sweetened with high-fructose corn syrup in addition to a standard diet of rat chow, the animals gained much more weight than male rats that received water sweetened with table sugar, or sucrose, along with the standard diet. The concentration of sugar in the sucrose solution was the same as is found in some commercial soft drinks, while the high-fructose corn syrup solution was half as concentrated as most sodas, including the orange soft drink shown here. (Photo: Denise Applewhite)

High-fructose corn syrup and sucrose are both compounds that contain the simple sugars fructose and glucose, but there at least two clear differences between them. First, sucrose is composed of equal amounts of the two simple sugars -- it is 50 percent fructose and 50 percent glucose -- but the typical high-fructose corn syrup used in this study features a slightly imbalanced ratio, containing 55 percent fructose and 42 percent glucose. Larger sugar molecules called higher saccharides make up the remaining 3 percent of the sweetener. Second, as a result of the manufacturing process for high-fructose corn syrup, the fructose molecules in the sweetener are free and unbound, ready for absorption and utilization. In contrast, every fructose molecule in sucrose that comes from cane sugar or beet sugar is bound to a corresponding glucose molecule and must go through an extra metabolic step before it can be utilized.

This creates a fascinating puzzle. The rats in the Princeton study became obese by drinking high-fructose corn syrup, but not by drinking sucrose. The critical differences in appetite, metabolism and gene expression that underlie this phenomenon are yet to be discovered, but may relate to the fact that excess fructose is being metabolized to produce fat, while glucose is largely being processed for energy or stored as a carbohydrate, called glycogen, in the liver and muscles.

In the 40 years since the introduction of high-fructose corn syrup as a cost-effective sweetener in the American diet, rates of obesity in the U.S. have skyrocketed, according to the Centers for Disease Control and Prevention. In 1970, around 15 percent of the U.S. population met the definition for obesity; today, roughly one-third of the American adults are considered obese, the CDC reported. High-fructose corn syrup is found in a wide range of foods and beverages, including fruit juice, soda, cereal, bread, yogurt, ketchup and mayonnaise. On average, Americans consume 60 pounds of the sweetener per person every year.

"Our findings lend support to the theory that the excessive consumption of high-fructose corn syrup found in many beverages may be an important factor in the obesity epidemic," Avena said.

The new research complements previous work led by Hoebel and Avena demonstrating that sucrose can be addictive, having effects on the brain similar to some drugs of abuse.

In the future, the team intends to explore how the animals respond to the consumption of high-fructose corn syrup in conjunction with a high-fat diet -- the equivalent of a typical fast-food meal containing a hamburger, fries and soda -- and whether excessive high-fructose corn syrup consumption contributes to the diseases associated with obesity. Another step will be to study how fructose affects brain function in the control of appetite.

The research was supported by the U.S. Public Health Service.