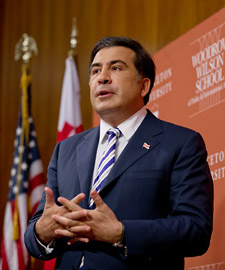 Georgian President Mikheil Saakashvili addressed his nation's transformation during a speech Thursday, May 17, in Dodds Auditorium in Robertson Hall. (Photos by Sameer Khan)

Georgian President Mikheil Saakashvili presented his nation's transformation as a test case for democracy in the post-Soviet era during an address Thursday, May 17, at Princeton University.

"We want to create a modern society," Saakashvili said to a full audience in Dodds Auditorium in Robertson Hall. "We want to be successful. We want to learn from the others and to be a model for the region and the rest of the world. That's what's going on in Georgia."

Saakashvili outlined the nation's path since the 2003 "Rose Revolution" that helped lead to his election as president and addressed the animosity between Georgia and Russia that continues following the 2008 armed conflict between the neighbors. He also said Georgia must continue to push for closer integration with Europe, despite the European Union's economic woes.

Saakashvili's speech, co-sponsored by the Woodrow Wilson School of Public and International Affairs and the Liechtenstein Institute on Self-Determination, came during a trip to the United States that will take the Georgian leader to Chicago for the May 20-21 NATO summit.

Saakashvili was elected to Georgia's parliament in 1995 and was appointed minister of justice in 2000. In 2003, he urged Georgians to reject election results denounced by observers as rigged and called on the public to protest, leading to the Rose Revolution. When Saakashvili was elected president in 2004, he was 37 years old, making him the youngest president in Europe.

Then, he said, "A new generation came to power after the Rose Revolution and the list of reforms is absolutely amazing."

Saakashvili said the new government tackled corruption by replacing the entire police force, customs office and tax service and reduced the number of government agencies. The result, Saakashvili said, is a nation with little corruption, a low crime rate and an efficient bureaucracy. He was re-elected to a five-year term in 2008.

"Saakashvili successfully used policy and values to effectively root out corruption, especially in the law enforcement services, and to foster democracy and to actively encourage foreign investment and economic development," said Wolfgang Danspeckgruber, director of the Liechtenstein Institute on Self-Determination and a lecturer in public and international affairs, who introduced Saakashvili.

Many challenges remain for Georgia, Saakashvili noted. The nation is still at odds with Russia following the 2008 conflict. While growth has rebounded since the fighting, unemployment remains high.

Saakashvili emphasized infrastructure projects under way across the country, as well as new government buildings designed to project — and encourage — openness and the nation's transformation.

"Despite all the shortcomings and mistakes we have made, we have created a new alternative model for governments in the post-Soviet space," Saakashvili said.

Saakashvili said Georgia must continue to move toward integration with Europe, despite the European Union's economic woes.

Asked by a member of the audience what it will take to normalize relations with Russia, Saakashvili said: "I think it's very simple and very difficult — it's for Russia to change."

Still, he noted, many Russians visit Georgia as tourists and there is some Russian investment in the nation.

He also argued that Georgia is forging a new path in international relations that focuses on Europe and the United States. He said Georgia cannot back away from efforts to move closer to other European nations despite the EU's economic problems.

"We want to integrate," he said. "We are too small and in too risky an environment not to want to. Also, we need to be closer to Europe to move closer to the U.S."

Closer ties to NATO would be a significant step in that direction, and Saakashvili said he thinks NATO officials will acknowledge Georgia's strides during the meeting in Chicago.

"We want them to say we are on our way, that we are progressing. I think they will say that," he said. "I think NATO is going to say that we have made significant progress and have become closer to the alliance."

Alex Balistreri, a graduate student in Near Eastern studies, noted that Saakashvili placed strong emphasis on infrastructure improvements as a key to moving Georgia forward.

Willem Boning, a graduate student in architecture who has studied and visited Georgia, said the image of emerging prosperity projected by Saakashvili's government downplays the "still unbelievable poverty in the country."

An archived webcast of the lecture will be available on the Wilson School's website.