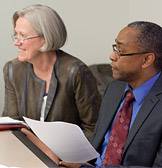 In the class "Modern Genetics and Public Policy," Shirley M. Tilghman, president of Princeton University, and Keith Wailoo, the Townsend Martin Professor of history and public affairs, encourage students to examine how science and public policy intersect. A recent class focused on the crossroads of modern genetics and criminal justice, fueling a far-reaching discussion over the three-hour session.

That unexpected combination of words led to the "question of the day" that lit up on a screen in front of 26 Princeton undergraduates: "What changes in policy and society, if any, are needed to ensure that genetic evidence produces true justice?"

Seated together at one end of a classroom in Robertson Hall on a recent fall evening were the initiators of the question: Shirley M. Tilghman, president of Princeton University, and Keith Wailoo, the Townsend Martin Professor of history and public affairs. Together, they possess a wealth of knowledge to explore the topic. Tilghman, a professor of molecular biology, is one of the world's foremost authorities on genetics; Wailoo draws upon insights gained from his work on several award-winning books on genetics and society, and many years teaching across the disciplines of health, race and public policy.

But it is the students who are being challenged to answer the day's question in the course "Modern Genetics and Public Policy," which Tilghman and Wailoo are co-teaching for the first time this semester. The course is offered through the Woodrow Wilson School of Public and International Affairs. 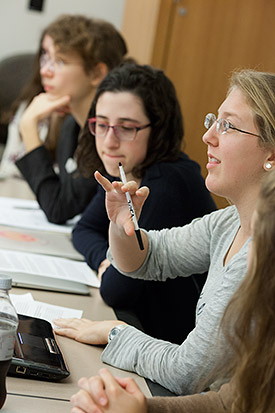 Senior Rebecca Dresner (foreground) joins the class discussion about the use of genetic information in criminal cases, while junior Danielle Kutasov looks on.

The idea for the course emerged after Wailoo heard Tilghman give the annual James Baldwin Lecture at Princeton in 2010 on the intersection of race and genetics, and an ensuing conversation illuminated their shared interests.

The course, which meets for three hours weekly, explores the intersections between modern genetics and public policy, focusing on health, law, consumer products and criminal justice. Every session emphasizes extensive discussion, a key ingredient to develop new thinking on a complex subject.

"For many of the issues we raise in the course, there is no right or wrong answer," Tilghman said. "Compared to genetics, the field of public policy is much murkier, and the room for disparate opinions is great. It is educational for students to hear how differently their fellow students think about issues."

Wailoo said that many of the topics "are still being debated and decided in the courts and among policymakers" — such as "whether people arrested for felonies can be required to give gene samples, or whether direct-to-consumer genetic testing is a good idea whose time has come or a public health problem." He noted that is important to "think clearly and critically about the ethical, legal and social issues because they will eventually affect all of us."

Senior Rebecca Thorsness, a major in the Wilson School, said the course encourages her to make connections between different academic fields. "I really love learning about public policy through the scientific angle, and the course has absolutely given me insights into both arenas and how they intersect and coexist," she said.

To prompt ideas, the course includes a variety of readings spanning scientific studies, newspaper reports, policy documents, business reports and scholarly analyses. Such an array is needed, according to the syllabus, because "turning genetic science into public policy is a messy process — shaped by new discoveries, by business and economic interests, by social values, by political concerns, and by fears and hopes." 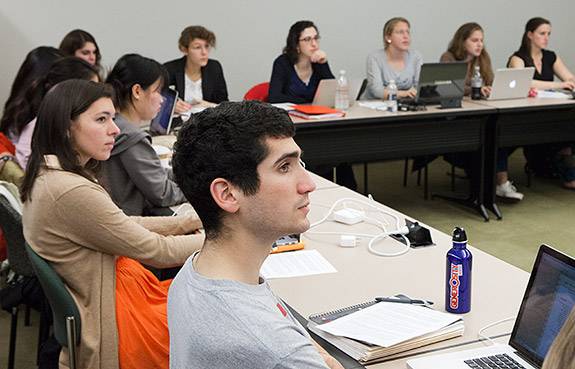 The discussion-oriented course includes students from a variety of majors who explore readings on issues related to "the messy process" of "turning genetic science into public policy."

During the class session on genetics and justice, students quickly became engrossed in fundamental concerns. They examined the controversy surrounding the XYY gene — the so-called "criminal chromosome" — link to criminal behavior, fueled by findings such as the discovery in 1965 by cytogeneticist Patricia Jacobs of an extra Y chromosome among male inmates of a correctional facility in Edinburgh, Scotland.

The students identified flaws in Jacobs' research, which did not include genetic data from the general population, as well as biases about the connection between genetics and crime promulgated by other researchers. The focus then turned to the media and popular culture, which fanned the flames about the possibility of being "born bad."

"Although we no longer debate the criminal tendencies of people with XYY chromosomes, these issues haven't fully disappeared," Wailoo said, but he observed that "new questions about the use and misuse of biology in the courtroom are constantly popping up, creating policy and social debate."

With that the curtain parted on one of the most controversial criminal cases in recent history: the 1995 murder trial of former football star and actor O.J. Simpson, who was arrested for — and then acquitted of — the murders of his ex-wife Nicole Brown Simpson and her friend Ronald Goldman. The trial relied heavily on DNA evidence and engulfed the media.

It was a vivid example to explore for students who, as one informed Tilghman and Wailoo when asked if they had watched the trial on TV, were "about 3 at the time."

"To convict what do you need?" Tilghman asked.

"Beyond a reasonable doubt," said a student.

"There has to be enough genetic information to be able to say 'beyond a reasonable doubt,'" Tilghman agreed.

"Does the genetic information speak for itself or does it have to be argued?" asked Wailoo.

To answer the question, students reviewed details of the Simpson case, supplemented by an explanation by Tilghman of some of the science behind DNA forensics.

"Genetics is not the easy, simple, magical solution that solves the case," said one student. "DNA is only one part of a larger network of evidence."

"It shows that there is a need for infrastructure to be built in the criminal justice system," suggested another. 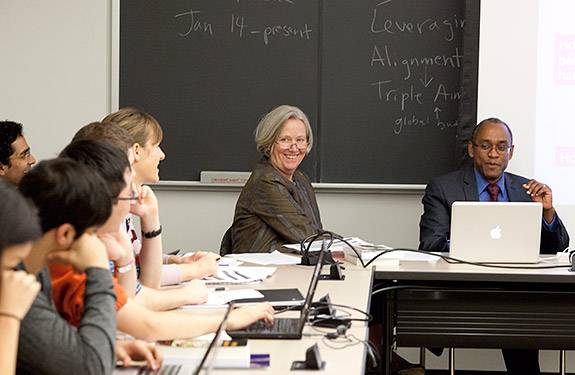 In co-teaching "Modern Genetics and Public Policy," Tilghman and Wailoo bring a wealth of knowledge to the topic, while seeking fresh ideas along with the students. "For many of the issues we raise in the course, there is no right or wrong answer," Tilghman said.

Splitting into two groups, the undergraduates continued the conversation, led by assigned student leaders. In the group attended by Tilghman, senior Emily Trask-Young, an anthropology major, invited her classmates to respond to questions about privacy and genetic testing.

"What do you think about DNA evidence and its collection?" Trask-Young asked.

"What about privacy expectations if you drink from a glass and leave it behind and it is confiscated by the police?" asked Tilghman.

"I don't think the government should be collecting DNA from whomever they want," said senior Andrew Weinstein, a molecular biology major.

"I'm not so worried about the police as I would be if they were using this for some other type of testing," said Ophelia Yin, a senior majoring in ecology and evolutionary biology.

"So it's about balancing individual and society needs," said Trask-Young.

As the discussion developed, questions emerged about the merits of a national DNA database and how it might help control crime.

Masha Krupenkin, a junior majoring in molecular biology, voiced her concern: "What kinds of crimes are we attempting to link genetically?" she asked. "We talked about violent crimes and petty theft. Why aren't we looking for genetic links for other kinds of crimes, for example white- collar crimes? Embezzlement? Why are we focusing on crimes that affect lower-income people?"

Comments crisscrossed the room. Later, when the two groups rejoined, the question of "trust" was emphasized. Tilghman echoed questions raised by the students. "What are the crimes being raised? What do we mean by a crime? Who is being arrested?"

For Yin, who said she chose the class due to her interest in the future of genetic technology, the open-ended dialogue is an integral part of the learning experience. "I love that the class is so interactive — everyone speaks up in class and Professors Tilghman and Wailoo are great at asking provocative questions that cause us to think deeply about our preconceived notions about a topic," she said.

In return, the experts are learning from the students.

"The students are terrific — what I've really enjoyed is seeing how bright and engaged students from the sciences, from Woodrow Wilson, and from the social sciences and humanities ask such different insightful questions," Wailoo said.

Tilghman said the students are opening her eyes to new issues. "The statement I made toward the end of the last class — that they are the first generation to expose themselves to public scrutiny in social media and yet many of them seem highly sensitive to genetic privacy issues seems, on its surface, to be a contradiction," she said. "Yet as they explained it, they think they are controlling what is available online about their lives — I'm not at all confident that they have as much control as they think they do — while genetic information may reveal things about themselves that they either do not know, or do not want to know."

Tilghman added that the course allows her a fresh look at what can develop when science enters the public sphere.

"Teaching the course reminds me that the apparent clarity that I experience as a scientist disappears when the science hits the public," Tilghman said. "An interesting issue for me is what determines the line between acceptable and unacceptable."