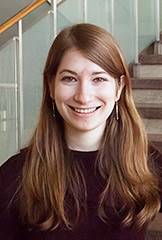 Victoria Solomon, a Princeton University senior with plans to use electronics to improve medical technology, has been named a 2013 Marshall Scholar.

Solomon, from North Wales, Pa., plans to pursue a master's degree in medical electronics and physics in the United Kingdom. She is the second Princeton student this year to win a Marshall, which pays the cost of graduate studies and living expenses at a British university of the recipient's choice for up to two years. The other Marshall Scholar is Jake Nebel, a philosophy major, whose selection was announced in November.

Solomon, an electrical engineering major, said she intends to focus her studies on developing technological systems that can assist people with physical disabilities. She said that her time at Princeton, including an independent project on remote biomedical sensors, showed her how to make technology that can lead to social improvements.

"Before I found engineering, I always knew I wanted to help people, I just didn't know in what way," Solomon said. "My long-term goal is to design biomedical systems that can improve people's lives."

In her scholarship application, Solomon said she was inspired by the story of Rahamim Melamed-Cohen, an Israeli artist left paralyzed by Lou Gehrig's disease. She said his work was made possible not only by the determination of the artist to overcome his disability, but also by the scientists and engineers who developed the systems that supported him.

"Dr. Melamed-Cohen cannot move his arms, legs or most other muscles," she wrote. "Yet, with the aid of a computer sensor that tracks his eye movement, he managed to create an entire book of artwork."

Naveen Verma, an assistant professor of electrical engineering at Princeton, advised Solomon on her junior-year project, which involved creating a system to send data about a patient from a medical sensor to a smartphone. The sensor can monitor brain or cardiac activity and alert physicians to changes in status that may indicate a developing problem. Solomon's work was part of a larger project that eventually will allow doctors to remotely monitor patients through their phones and allow people greater freedom while recovering from a variety of ailments, Verma said.

Verma also is supervising Solomon's independent work this semester in collaborating with Technology Against ALS Foundation to build a more affordable, portable communication devise for patients with the neurodegenerative disease amytrophic lateral sclerosis (ALS), which is also known as Lou Gehrig's disease.

"Victoria is very driven about how she can bring her technical expertise to these applications," Verma said. "She approaches all of the engineering fundamentals with the constant question of how does this solve a health care problem."

Solomon is a member of Phi Beta Kappa and of the engineering honor society Tau Beta Pi. Within the engineering school, she has advised freshmen in course selection and shared insights in independent work through open houses in electrical engineering. She also leads University tours as an Orange Key Tour guide.

Throughout her time at Princeton, Solomon has been active with the Center for Jewish Life, including serving as chairperson of the Social Justice Committee and as a member of its student board.

She also has worked as a research assistant in the laboratory of Stacey Sinclair, associate professor of psychology and African American studies, and as an intern at the Princeton Plasma Physics Laboratory.

As a high school student, Solomon served on the board of the social service agency Manna on Main Street in Lansdale, Pa., and wrote a book about the center with Tom Allebach, the agency's executive director at the time, to raise funds for the organization.

"There are a lot of unfounded stereotypes about people who come to a food pantry," Solomon said. "My co-author and I wanted to put a face to these people who are really just like you and me."

"Victoria is not the kind of person who likes to stand around," Allebach said. "She likes to accomplish things. She was always very service-oriented, very focused on the people."

Allebach recalled a dinner at which Solomon envisioned future devices that could be used to help patients. He said he was not surprised that she had been selected for the scholarship program.

"She sticks with things," he said. "She does not give up."

After her Marshall Scholarship, Solomon hopes to work at a company that creates and markets biomedical and assistive technologies for patients with disabilities. She also intends to mentor future engineers and build awareness about research that can be pursued outside of academia.