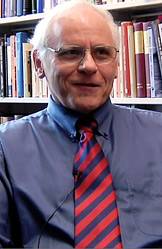 Small towns are home to about 10 percent of the U.S. population but continue to play an outsize role in American culture, according to Princeton sociologist Robert Wuthnow.

The nation's 15,000 small towns are sometimes portrayed as idyllic places that are "the real America" and sometimes as dying communities to be escaped at the first opportunity, said Wuthnow, the Gerhard R. Andlinger '52 Professor of Social Sciences and a professor of sociology. Too often missing from the discussion, he said, are the voices of small-town residents themselves.

That's part of the reason Wuthnow undertook a research project that included interviews with more than 700 people in small towns around the country and analysis of Census and survey data. Results of the research are detailed in a book, "Small-Town America: Finding Community, Shaping the Future," released this month by Princeton University Press.

Small towns are generally defined as those with fewer than 25,000 residents that aren't part of a larger urban area. Wuthnow's work doesn't identify the towns where residents were surveyed to protect the privacy of the interview subjects.

Wuthnow, who studies social and cultural change in communities, is the author of about 30 other books. Recent titles include "Remaking the Heartland: Middle America Since the 1950s," "Be Very Afraid: The Cultural Response to Terror, Pandemics, Environmental Devastation, Nuclear Annihilation and Other Threats," and "Boundless Faith: The Global Outreach of American Churches."

In this video, Wuthnow describes his findings about where small towns fit into American society today, what's ahead and what helps the towns succeed.

"[This issue] matters mostly because any segment of the population, especially one that includes some 30 million people, is one that we need to understand, whether we are attracted or not attracted to small towns," Wuthnow said. "My main hope in doing this project was first of all to encourage greater understanding of the variety of small towns, the complexity of small towns and secondly to engender a certain degree of respect so that there was an appreciation of what small towns have to offer."

Wuthnow said there's reason for optimism about the future of many of those towns, pointing to the resilience of their residents, opportunities for small-scale economic development and lower cost of living.

"A lot of people have predicted the death of small towns. It is true that many small towns are declining, especially if they have already become quite small or already were declining. My view is a little more mixed than that," he said. "There is also a social resilience in small towns. A town of anywhere from 2,000 to 5,000, up to 10,000 people is likely to do pretty well. I would predict that in the next 10 years or 20 years there will still be at least 30 million people living in small towns."