In the forests of Ecuador, plain-tailed wrens nest in bamboo thickets, singing complex and continuous melodies. Residing nearby are rufous antpittas, small, secretive birds that hop like thrushes and whistle in mossy forests. Together, their songs fill parts of the South American Andes.

Birdwatchers often seek out rare and beautiful birds like the wren and antpitta using bird-song recordings known as "playbacks" to draw them out of their hideaways. But does such warbling-on-repeat harm the birds? Princeton University research says yes — and no. Using the sounds of both bird species, a Princeton University researcher has reported the first peer-reviewed research to examine the effects of playbacks in the wild. In the journal PLOS One, he shows that playbacks may have potentially negative consequences in the short term, especially in terms of diverting a bird's energy from essential tasks such as tending to its nest.

"Playbacks would be harmful if a species becomes stressed, expends energy or takes time away from other activities to respond to these recordings," said J. Berton Harris, a postdoctoral fellow studying under David Wilcove, a Princeton professor of ecology and evolutionary biology and public affairs. Wilcove also is co-director of the Program in Science, Technology and Environmental Policy housed in the Woodrow Wilson School of Public and International Affairs.

"Birds could be wasting their time and energy by responding to nonexistent intruders," Harris said. "When male birds respond to birdwatchers' playbacks to defend their territories, they may spend less time caring for their nestlings, experience higher levels of stress hormones or be subject to a romantic coup from other males while away from their mates." 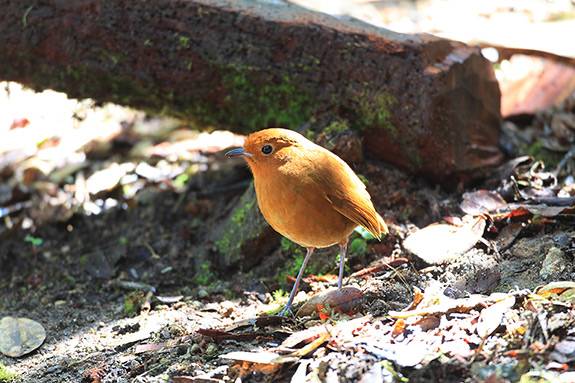 Princeton University research examined the effects of bird-song recordings known as "playbacks" on birds in the wild. Birdwatchers use playbacks to lure rare and beautiful birds like the wren and rufous antpitta (above) out of their hideaways. The researchers found that playbacks could have potentially negative consequences, especially in terms of diverting a bird's energy from essential tasks such as tending to its nest.

Harris studied the effects of both single and repeated playbacks on wrens and antpittas living in a southern Ecuadorian biological reserve. In his first trial, he introduced single playbacks to 24 groups of wrens and 12 groups of antpittas. Along with co-author David Haskell, a biology professor at Sewanee: The University of the South, Harris monitored both bird species for one hour after playing a five-minute recording of the birds. The researchers found that wrens and antpittas sang more often and more repeatedly after listening to the playbacks — which could potentially sap them of energy.

Fortunately, that exhaustion might only be short-lived. In the second part of the study, Harris and Haskell monitored the effects of daily playback only on groups of plain-tailed wrens. As in the first experiment, they played the birds' song once for five minutes, recording the birds' responses for one hour. This was done daily for two-and-a-half weeks.

Although the vocal response was strong for the first 12 days, the wrens eventually habituated and stopped responding, which suggests that playbacks have minimal effects on wrens over time. One group of wrens, seemingly uninterested, even built a nest near a playback site. Harris said this behavior should nudge scientists to consider bird-watching activity when selecting research sites so that results aren't biased.

"Birdwatchers are ardent conservationists, and they want to minimize their impact while observing secretive birds," Harris said. "They promote environmental conservation by funding ecotourism infrastructure, especially in developing countries, where tourism can provide local people alternatives to habitat exploitation. Unfortunately, as evidenced by this research, birdwatchers may also have negative effects on ecosystems."

Harris suggests that future studies be conducted to better understand how playbacks may affect other aspects of a bird's life.

"Studies of the effects of playback on bird reproductive success have not yet been done," Harris said. "Until such studies are available, it'd be wise for birdwatchers to be cautious of the negative effects. For example, it might make sense to minimize the use of playback with endangered species or in areas that host a lot of birdwatchers."

The paper, "Simulated Birdwatchers' Playback Affects the Behavior of Two Tropical Birds," was published online Oct. 11 in PLOS One. This research was supported by the Jocotoco Conservation Foundation in Ecuador.