As the final buzzer sounded at Penn's home court, the fabled Palestra in Philadelphia, Princeton players and coaches hugged one another and hoisted high the Ivy League trophy for the fifth time over the last six seasons.

Along with the 31-0 University of Kentucky men's team, Princeton's women are the only undefeated team in the nation. They will learn their first-round opponent in the NCAA tournament Monday.

"An historic and undefeated season is a remarkable accomplishment that is still sinking in," Head Coach Courtney Banghart said Wednesday morning. "Winning games is what we train to do, while we know full well that it's how we go about our work that determines our success.

"This is a true team in every sense of the word," she said. "They are a great story, true student-athletes who commit fully to what they're doing in all facets of their Princeton lives.

"We humbly thank the entire Princeton community for their unwavering support during this historic season," Banghart said, adding that the team will continue "to represent the great Princeton tradition with class, commitment, accountability and passion."

Said Mollie Marcoux, the Ford Family Director of Athletics: "We could not be more proud of the coaches and players on this team. Not only are their accomplishments on the court nothing short of remarkable, but they represent the ideal values of our athletic department and of our University.

"Our players are shining examples of what Division I student-athletes can be as they are highly successful on the court and in the classroom and they are leaders in our community," Marcoux said. "Our coaches are fully committed to winning at the highest level while also providing their players with the best possible student-athlete experience.

"This season will be one that we'll all remember for a long time and will go down in history as one of the very best Princeton and Ivy League teams. Go, Tigers!" 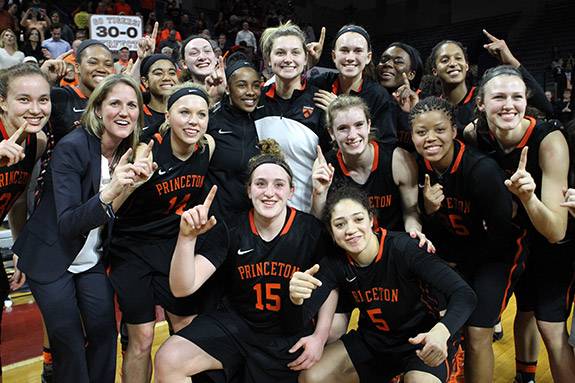