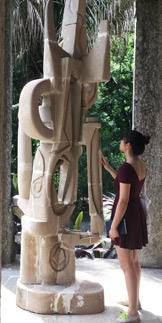 Over spring break as part of the course "Environmental Challenges and Urban Solutions," 12 Princeton undergraduates traveled to Rio de Janeiro and São Paulo, Brazil, to study several issues discussed in class. The interdisciplinary course, co-taught by Mario Gandelsonas, the Class of 1913 Lecturer in Architecture, and Bruno Carvalho, assistant professor of Spanish and Portuguese languages and cultures, asks students to rethink traditional theories about nature and city dynamics. Above: Junior Jacqueline Li, a civil and environmental engineering major, examines a sculpture by Roberto Burle Marx in Rio de Janeiro.

This spring, 12 Princeton undergraduates are joining forces in the interdisciplinary course "Environmental Challenges and Urban Solutions" to confront urbanization and environmental problems and to rethink traditional theories about nature and city dynamics.

The instructors: The class is co-taught by Mario Gandelsonas, the Class of 1913 Lecturer in Architecture, and Bruno Carvalho, assistant professor of Spanish and Portuguese languages and cultures.

Gandelsonas specializes in urbanism and semiotics and is developing a research project on 21st-century urban infrastructure. He is directing the program Fluvial Metropolis for the University São Paulo-Princeton Strategic Partnership focused on improving urban and suburban water infrastructure in New York City and São Paulo.

Carvalho's research and teaching interests range from the early modern period to the present, and include literature, culture and the built environment in Latin America, with a focus on Brazil. He has written on topics related to literature, film, architecture, cartography and city planning. He is co-director of the Princeton-Mellon Initiative in Architecture, Urbanism and the Humanities — a program to stimulate interdisciplinary teaching and research on the built environment in North America and South America.

The course: Taught for the first time this term, the class addresses intersections between climate, water, energy and urban environments from a perspective informed by the humanities and architecture. It is funded by the Grand Challenges Program and has broad sponsorship including the Princeton Environmental Institute, the School of Architecture, and the programs in Latin American studies and urban studies.

The instructors noted that with more than half of the world's population living in cities, they wanted to build the course around the question, "How can we better assess the impact of cities on the environment?" 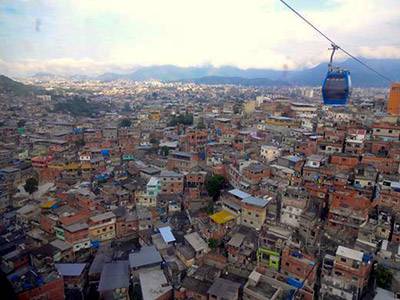 After the trip to Brazil, each student presented photographs to the class. This photo of the cable car in Complexo do Alemão in Rio de Janeiro rising above the favelas was taken by junior and geosciences major Claire Zarakas. (Photo by Claire Zarakas, Class of 2016)

"We closely examine the growing literature on the environmental advantages of dense urban centers compared to other forms of development like sprawl, while looking for models relating to the natural environment that also recognize our 'embeddedness' in it," Carvalho said.

"Most students shared our concern with the fate of our planet, as well as our responsibilities to ecosystems and to future generations," said Carvalho. "We wanted to instill a collaborative environment where students would practice communication across disciplinary boundaries and be able to learn from each other. So we tried to find a balance between students with various concentrations.

"The goal is to identify sustainable solutions that are sensitive to issues like water resource management, energy efficiency, technology innovations, human and environmental health, as well as equity and fairness, poverty and job creation, and more intangible notions of belonging," said Carvalho. 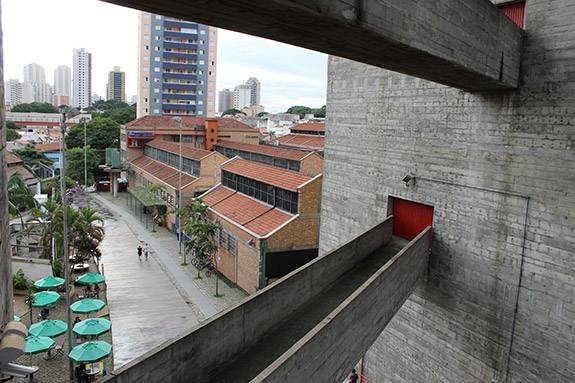 In her photo "Layers," junior Angeline Jacques, an architecture major, captures various representative layers of São Paulo: skyscrapers on the horizon, repurposed industrial spaces in the middle and the modern SESC Pompéia cultural center expansion in the foreground. (Photo by Angeline Jacques, Class of 2016)

First class exercise: Each student mapped the neighborhood of their youth spent in locations around the world, then exchanged the map with a student from a different discipline.

Gandelsonas explained that the assignment enabled students to open up to each other by bringing something personal to the course. "The second goal was to introduce a visual element to their learning," he said. "Princeton students are more familiar with representing their ideas in writing, but are less facile with doing so visually."

The first assignment was an important step in the learning process. "Our biggest surprise was how all of this actually came alive in very concrete ways during a spring break trip to Brazil," Gandelsonas said. 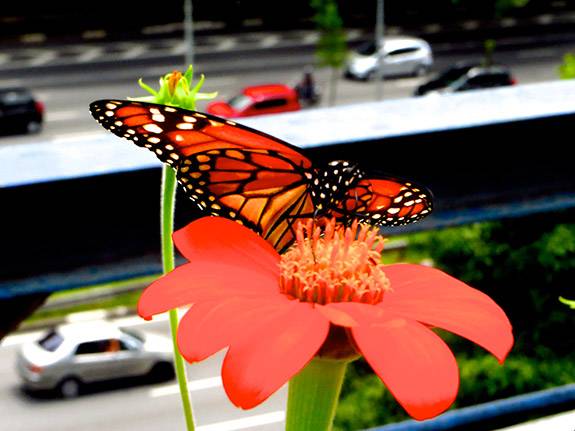 Sophomore Ava Hoffman's photo "Nature Above the City" captures the juxtaposition of nature and the built environment. Carvalho told the students that 100 years ago, the road below would have been a river. (Photo by Ava Hoffman, Class of 2017)

In the field: Over spring break, the class traveled to Rio de Janeiro and São Paulo to study some of the issues discussed in class.

"We wanted to bring attention to the various ways in which cities negotiate relationships between natural landscapes and the built environment," said Carvalho. "This involves a host of variables which we discuss in class, including people, gardens, infrastructure and architecture. One of the fascinating things about being in these cities is that we find extremely different models and patterns of development within fairly close proximity. We wanted to expose students to some of this variation."

In São Paulo, the students visited the Fumaça Community, a place where inhabitants preceded infrastructure, and no sewage system exists. They visited Ibirapuera Park, a vibrant public space in the middle of the city. They also walked around the historic city center to study the role of topography and nature — especially river systems — in the development of its heavily engineered landscapes. "There used to be a river there" was a phrase the students often heard from Carvalho.

"In Rio they often heard me say 'there used to be a hill here,'" added Carvalho. "In such complicated topographies, designers often found ways to multiply spaces, either by modifying the topography, or more interestingly, by incorporating solutions like lifting a building with columns, opening up spaces underneath. We studied several modernist projects that opted for that latter, and showed students how thoughtful, innovative design can make a big difference."

Students in the class are shown in São Paulo, flanked by Gandelsonas, far left, and Carvalho, second from right. (Photo courtesy of Haraya Buensuceso, Class of 2017)

Following the trip: Back at Princeton, the students participated in a space-and-time exercise. "A basic question when considering cities and the environment is the factor of time," said Gandelsonas. "However, people typically think of cities physically — in space and on maps. We are trying to convey that cities are also processes that develop through time, like landscapes."

Each student presented two photographs taken during the trip that showcased different spaces in time. One student shared a photo of a cable car towering above a low-income urban housing project. Another student presented a photograph of a butterfly balancing on the edge of a flower; below and in the distance is a multi-layered highway with cars whizzing in opposite directions. She called the photo "Nature Above the City" and discussed the juxtaposition of nature and the built environment. Carvalho pointed out that 100 years ago, the road would have been a river.

"This course has been an experiment for all of us," said Gandelsonas. "It has been exciting to see the students rethink some of their previous assumptions, and sometimes leave their comfort zone." 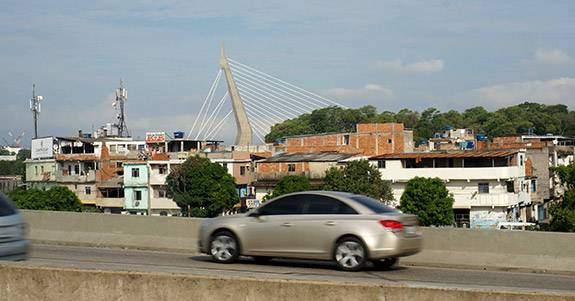 In her photo "Violent Infrastructure," Li said she considered the design of the bridge in the background as out of context with the surrounding environment. (Photo by Jacqueline Li, Class of 2016)

Final assignment: The last class exercise challenged the students "to intervene in the built environment" through design, diagnosis, art and policy. One of the student projects is the production of a map to design a more interconnected transportation system in São Paulo. Another involves the construction of an installation to call attention to lawns and water waste.

"The goal is to help translate specialized knowledge from a technical field to a broader audience, always with the ultimate goal of helping generate a sound, environmentally sensitive and sustainable solution," said Carvalho. 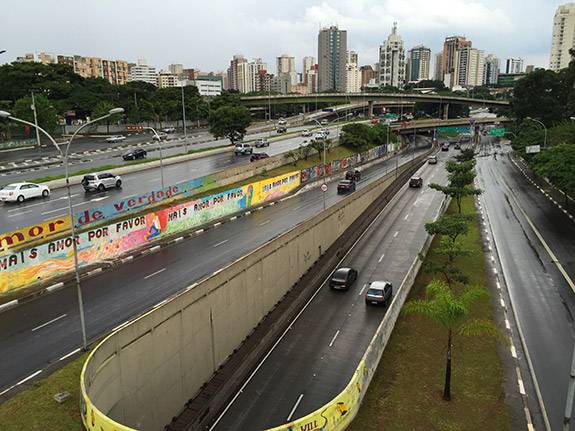 Sophomore Charlotte Williams, who is majoring in anthropology, said: "The trip was the clear highlight of the class. The most valuable was seeing the actual places we had studied. You can't replace the experience of walking in the city with a photograph."

Sandy Bole, a junior majoring in architecture, said the class surpassed his expectations. "The other students have actually been a crucial factor to my learning," he said. "Each individual was carefully picked and brings a lot to the table from their own personal and academic backgrounds. The course has affected my perspective by allowing me to think more critically and really think about who are the actors, creators and the users of the urban environment.

"Our generation is very thoughtful about environmental issues and is much more attracted to cities than generations past that moved out to American suburbs," he said. "This cultural switch is what will trigger a real change in urbanism, in environmental consideration, and even in social interaction." 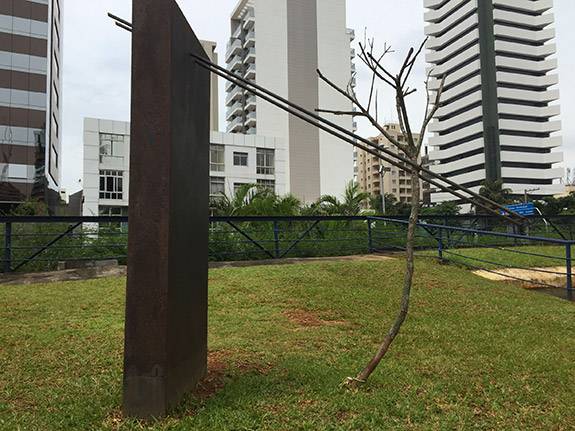 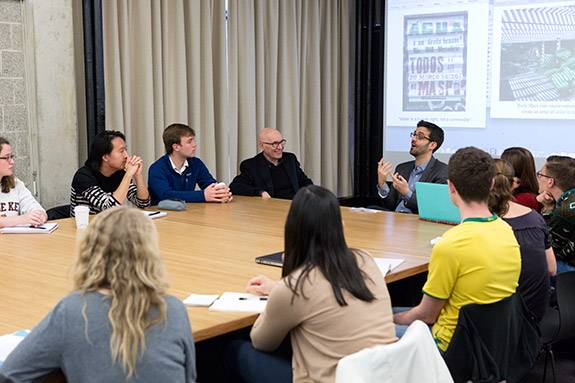 Carvalho, speaking, and Gandelsonas, center left, engage students in a discussion at Princeton after returning from Brazil. (Photo by Denise Applewhite, Office of Communications)