Thirty high school students from around the United States have been named recipients of the 2016 Princeton Prize in Race Relations. The students were honored April 29-30 during the annual Princeton Prize Symposium on Race held on the Princeton University campus.

The winners recently traveled to campus to participate in a two-day program that included group discussions, presentations and speeches. The Princeton Prize carries cash awards up to $1,000 for students in grades 9-12 in 26 regions around the country. The 2016 winners by region are:

Alabama: Katie Klasing, a senior at Mountain Brook High School in Birmingham, revitalized and presides over the school's Heritage Panel, an organization whose mission is to make the school a more inclusive community by embracing all students regardless of race, national origin, religion, sexual orientation and gender identity.

Atlanta: Jordan Williams, a senior at North Atlanta High School, is the co-founder and president of Stronger Melanin and North Atlanta Together, organizations created to address specific instances of racism and discrimination against minorities due to false perceptions that deny them an opportunity to excel academically. 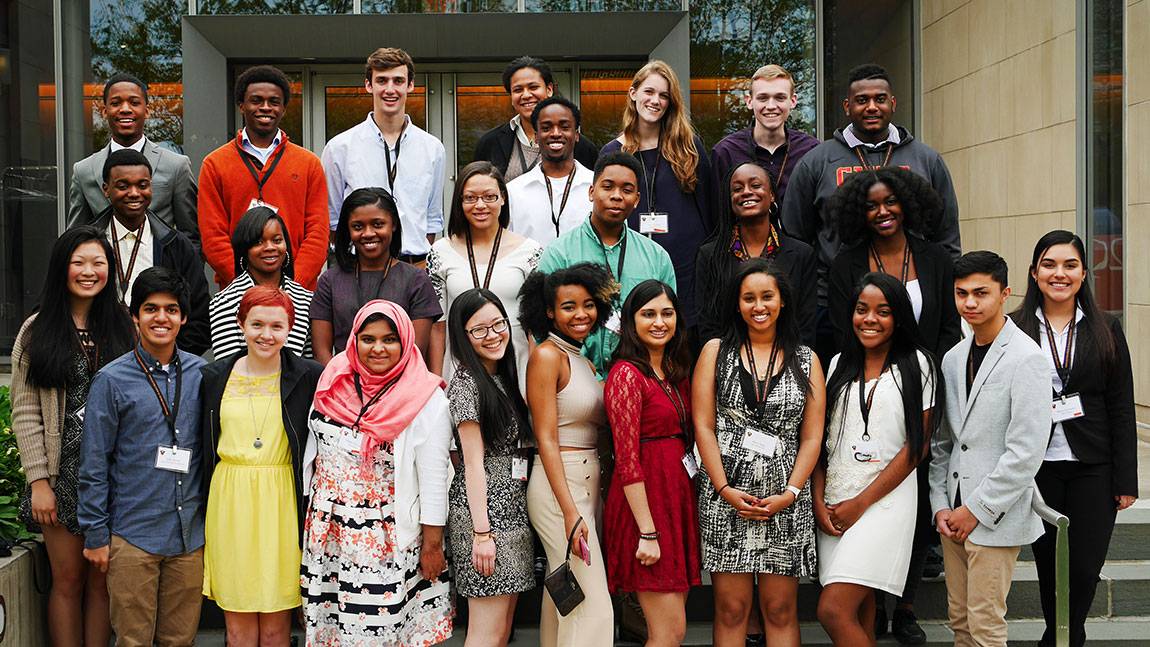 High school students from around the United States were recently honored with the 2016 Princeton Prize in Race Relations during a symposium held on the University campus April 29-30. (Photo by Evelyn Tu for the Office of Alumni Affairs)

Baltimore: Ariona Mayo, a senior at Baltimore Polytechnic Institute, is a member of the Baltimore City Youth Commission, which after the death of Freddie Gray and the ensuing violence hosted "Speak Outs" so that young Baltimoreans could voice their concerns and speak to racial issues. She also created a film documenting the different perspectives of city leaders during the protests.

Chicago: Maya Crowe-Barnes, a senior at Evanston High School, showed tireless commitment to advancing the cause of race relations in her school, her community and beyond, including her involvement with SOAR (Students Organized Against Racism).

Cleveland: Amani Hill, a senior at Shaker Heights High School, is the director of community engagement with her school's Student Group on Race Relations. She organized a series of community discussions focused on sharing information about and developing solutions to address the minority achievement gap in Shaker schools.

Denver: Sailesh Dahal, a junior at Eaglecrest High School in Centennial, was born in a refugee camp in Nepal. He immigrated with his family to the United States in 2008. Dahal knew almost no English and experienced significant culture shock. Frequent visits to the African Cultural Center (ACC) gave him a feeling of shared experiences with other immigrants and he has been a volunteer there ever since. He helps families of all backgrounds with resettlement paperwork, translates conversations between refugees and caseworkers, and shares his experiences with newcomers to aid their transition to a new life. He has also shared these experiences with young people at his high school.

Detroit: Arnisia Brown, a sophomore at Warren Mott High School, saw a need to have productive conversations on racial issues at her school. She founded the A.W.A.K.E. Club, an acronym that stands for Aware, Wise, Assertive, Knowledgeable and Equality. Her idea was meant to spark understanding, education and awareness by allowing the student body to be more cognizant of the power of their words.

Houston: Chandana Vanditha Golla, a senior at Bellaire Senior High School, created and maintains The Real Melting Pot, an online publication that provides a platform for civil discussion about the current events and a place to share what young adults are thinking and feeling about their lives. It's a place to expunge misconceptions, to address stereotypes and racism, and to challenge the thoughts of young adults.

Los Angeles: Davona Watson, a senior at Woodrow Wilson High School, started a Black Students Union at her predominantly Latino magnet high school. In doing so, she began the process of helping the students and staff understand the issues that black students faced at the school and the resultant barriers to academic achievement. The Black Students Union served not only as a support system for other black students but also as way of challenging the community's mindset toward black students.

Memphis: Saneela Tameez, a senior at Hutchison School, cofounded the Coexist Society at her school to help foster a more inclusive environment. The group meets twice a month, and Saneela leads discussions and organizes the topics, events, dates and research for the club. Among other things, participants in the discussions share personal experiences with racism.

Miami: Gillian Daley, a senior at Cooper City High, founded the school's Multicultural Club. Daley's efforts have gotten students and teachers talking about empowerment issues raised at the club's weekly meetings. She organized events such as a Privilege Walk, to illustrate the many factors that play into people's success, and erecting the school's Peace Pole. The Peace Pole displays the message "May Peace Prevail on Earth" in 14 languages.

New Jersey, Central and Southern: Winona Guo and Priya Vulchi, both juniors at Princeton High School, are co-founders of CHOOSE, a student-led organization that focuses on leveraging personal and local stories to spark conversations about race and to ensure the inclusion of race-related topics in the district curriculum. To formally share the stories they collected from the community, Guo and Vulchi created an online platform known as the Classroom Index, which gives educators access to the more than 200 interviews with appropriate discussion points.

New Jersey, Northern: Shawn Ohazuruike, a senior at Delbarton School, helped transform the culture of his high school by creating and leading a student group, Diversity Among Peers (DAP). He also collaborated with faculty and other students to establish the Minority Mentor Program during his freshman year to provide greater support for minority students. Ohazuruike teaches his peers to cope with discomfort when engaging in race discussions.

New York City: Jensine Raihan is a senior at Townsend Harris High School in Queens. She has been a leader in Desis Rising Up & Moving (DRUM), a community organization that mobilizes its membership of low-income, South Asian immigrants to lead social and policy change that affect their own lives. Raihan also led a #BlackLivesMatter protest at her school, prompting school-wide discussions about race relations. She also serves on the Mayor's Leadership Team on School Climate.

Philadelphia: Simone Gibson, a junior at Friends' Central School, planned and organized the Different Voices, Same Vision Conference. The conference's goal was to promote understanding of race and other forms of diversity by broadening the perspective of how students from different environments experience the world and to help them develop their own voices while honoring the perspective of others. An online community of students from the participating schools grew out of the conference. The conference will become a yearly event.

Pittsburgh: Raymond S.S. Stroud III is a senior at Cardinal Wuerl North Catholic High School. He is the founder of the project "Dreams Come True Forty-Four," a community camping initiative. The project has its roots in response to Stroud's mother's diagnosis of ovarian cancer, as camping had always been the great bond in the Stroud household. Two years later, the four-day camping trip has evolved from a celebration of life to building a connection of neighbors of different ages, genders, economics and cultures. Stroud serves as the junior counselor and activities director, and runs the campsite and organizes all activities.

Rochester, New York: Thomas Cuyler is a senior at School Without Walls. His work improving race relations is not a year-long project, but a life-long commitment. As a freshman, Cuyler began working with the year-round Freedom School program supporting at-risk children; spent three years with "Project LEAP: I Can" developing and delivering targeted reading lessons intentionally featuring unfamiliar racial or cultural content; and worked with the Horizons program, teaching hands-on Lego math to city youth. He also created the GIS Scholars Program, a youth mapping leadership team using geo-coded data to explore the impact of racial disparities in the city. GIS Scholars won a $50,000 grant from the city of Rochester, enabling them to hire local teens using GIS skills to find solutions to neighborhood problems.

Rochester, New York: A senior at Greece Arcadia High School, Miles Christopher Perry recognized a racially and culturally unsupportive environment in his school. In response, he led a group of students to propose a new class called MOSAICS. Now a senior English elective taken for credit as part of his school's curriculum, MOSAICS is created by students for students. The class provides a forum for exploring intrinsic relationships between cultures, via topics ranging from privilege to appropriation to internalized racism. MOSAICS club is where students across four Greece high schools meet regularly to examine issues of race, religion, gender and poverty.

San Diego: Blanca Hernandez is a senior at Vista High School. She is co-founder and co-president of the International Club, an organization dedicated to serving English language learners (ELL) at Vista High School. Recognizing the barriers ELL students experience as they adapt to the high school setting, Blanca and a fellow classmate founded the club to provide English language tutoring for ELL students. Hernandez also leads activities that promote the social inclusion of the club's participants within the campus community, including attendance to athletic events and school dances.

San Francisco: Helen Kassa is a senior at Prospect High School in Saratoga, California. She has worked to emphasize the importance of social justice education and address the issue of race relations through multiple avenues. Kassa started a column in her high school newspaper called, "The Black Voice"; gave a TEDx Talk discussing the intersection between race, gender and identity; and reestablished her local community's NAACP Youth Council as well as her high school's Black Student Union.

Seattle: Makisa Bronson attends Inglemoor High School in Kenmore, Washington. She founded the Washington Youth Summit for Equality (WYSEQ), a student-run statewide conference that aims to facilitate the discussion and resolution of three main social justice issues: gender inequality, religious discrimination and racism. The goal of WYSEQ is to enhance the discussion of these controversial yet highly pertinent issues, by establishing a platform where local youth could talk about these problems in earnest, and to inspire true social progress across the state of Washington. In addition to creating this platform for discussion and problem solving, WYSEQ has also given rise to a youth network across the Seattle area.

Washington, D.C.: Sam Strickberger, a junior at Sidwell Friends School, is the co-founder and editor-in-chief of a publication called Insight, a school diversity publication. He was inspired to start Insight when he noticed that his school has a relatively diverse student body, but was missing a forum to illuminate the cultures and communities that shape Sidwell's environment. The publication has created a safe environment to discuss issues that are vital to the school community and the country. In addition to leading Insight, he has participated in the Student Diversity Leadership Conference and is scheduled to participate in Operation Understanding in summer 2016.