Eoin O’Carroll for the Office of Communications

In 1890, psychologist William James described attention as the spotlight we shine not only on the world around us, but also on the contents of our minds. Most cognitive scientists since then have drawn a sharp distinction between what James termed “sensorial attention” and “intellectual attention,” now usually called “attention” and “working memory,” but James saw them as two varieties of the same mental process.

New research by Princeton neuroscientists suggests that James was on to something, finding that attention to the outside world and attention to our own thoughts are actually two sides of the same neural coin. What's more, they have observed the coin as it flips inside the brain.

A paper published in Nature on March 31 by Matthew Panichello, a postdoctoral research associate at the Princeton Neuroscience Institute, and Timothy Buschman, an assistant professor of psychology and neuroscience at Princeton, found that attention and working memory share the same neural mechanisms. Importantly, their work also reveals how neural representations of memories are transformed as they direct behavior.

“When we act on sensory inputs we call it ‘attention,’” said Buschman. “But there’s a similar mechanism that can act on the thoughts we hold in mind.” 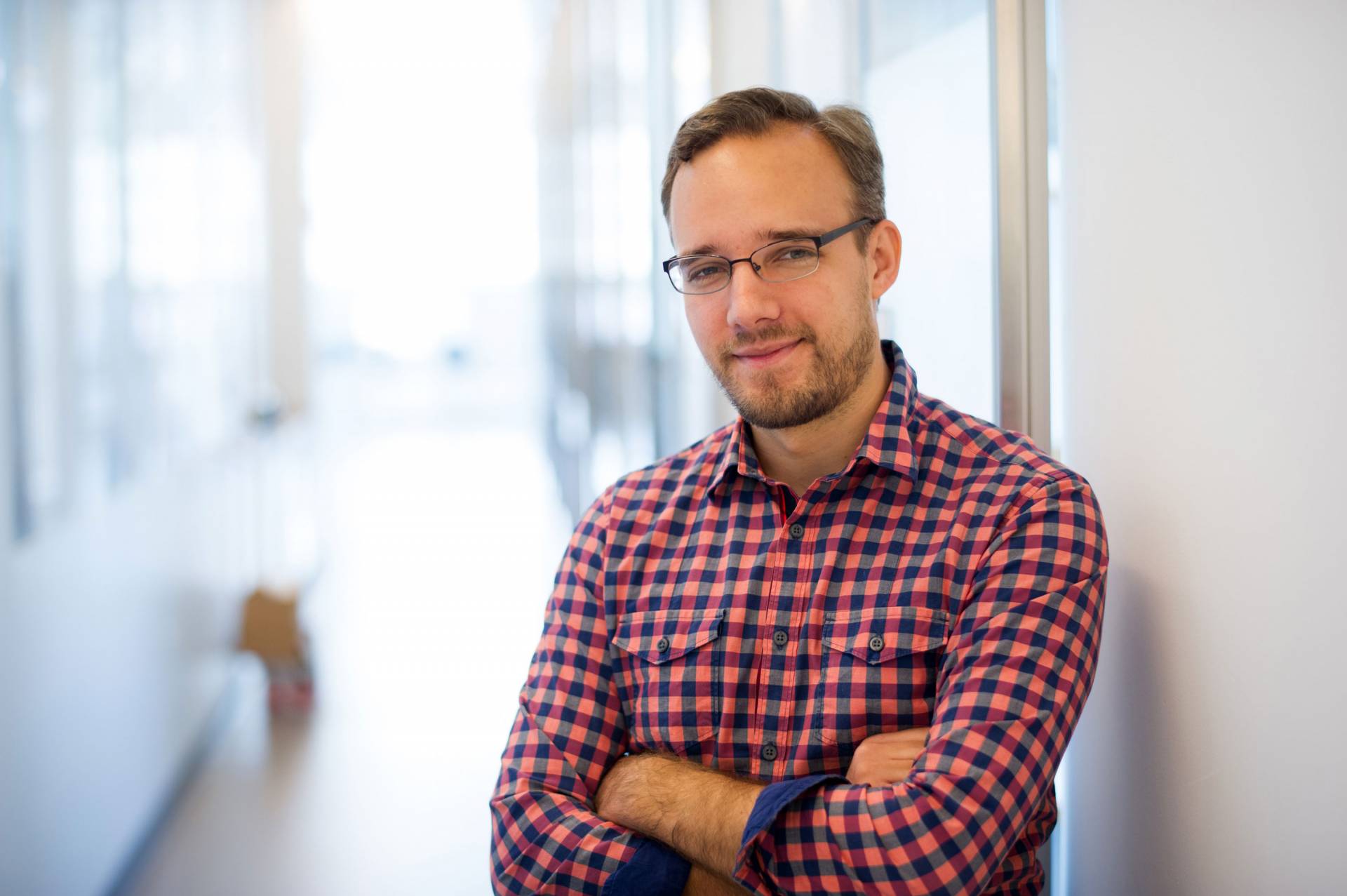 In a pair of experiments with two rhesus macaque monkeys, the researchers found that neurons in the prefrontal cortices that focus attention on sensory stimuli are the very same ones that focus on an item in working memory. What's more, Panichello and Buschman actually observed the neural representations of those memories realigning in the brain as the monkeys selected which memories to act upon.

In one experiment, each monkey was seated before a computer monitor and a camera that tracked their eye movements. The monitor displayed pairs of randomly selected colored squares, one above the other. Then the squares vanished, requiring the monkey to remember the color and location of the squares. After a brief pause, a symbol appeared, telling the monkey which square they should select from their working memory. Then, after another pause, they reported the color of the selected square by matching it to a color wheel.

To perform the task, each monkey needed to hold both colors in their working memory, select the target color from memory, and then report that color on the color wheel. After each response, the monkey was rewarded with droplets of juice. The closer their report was to the target color, the more droplets they earned.

In a second experiment, to compare the selection of items from working memory to a more classic attention task, the researchers indicated the direction to the monkeys before they saw the colored squares. This allowed the macaques to focus all their attention on the indicated square (and ignore the other one). As expected, the monkeys performed better on this task because they knew in advance which square to attend to and which to ignore. 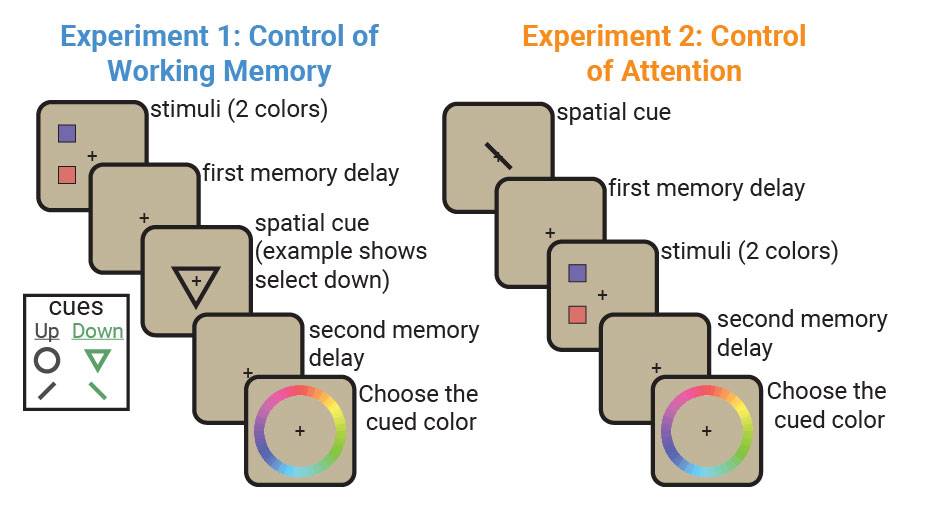 Princeton neuroscientists have discovered that attention and working memory are much more closely connected than most modern cognitive scientists realized. They performed two experiments in which monkeys were shown two color blocks and a symbol that directed them to look at the top one (a circle or an upward slanted line) or the bottom one (a triangle or a downward slanted line). They then matched the selected color to its spot on the color wheel. In the first experiment (left), they saw the blocks first and then the directional signal. In the second (right), they saw the directional signal first and then the color blocks.

“Attention allows you to focus your resources on a particular stimulus, while a similar selection process happens with items in working memory,” said Buschman. “Our results show the prefrontal cortex uses one representation to control both attention and working memory.”

The same neural recordings also showed how selecting an item changes memories so that they are either hidden away in working memory or used to make a response. This involves dynamically rotating the memory representation in the prefrontal cortex.

This can be likened to holding a piece of paper with text on it. If you hold the paper edge-on to your face, you can’t read it. This concealment, Buschman explained, prevents the brain from triggering the wrong response, or triggering a response too early.

“The brain is holding information in a way that the network can’t see it,” he said. Then, when it came time to respond at the end of the trial, the memory representation rotated. Just as rotating the paper allows you to read and act upon the text, rotating the neural representation allows the brain to direct behavior.

“This dynamic transformation just blew me away,” said Buschman. “It shows how the brain can manipulate items in working memory to guide your action.” 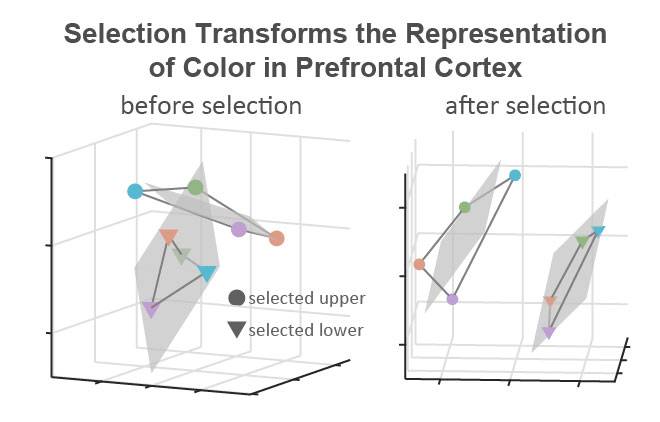 Data from the first experiment: The spectrum of possible colors for the two blocks (upper and lower) are represented as a ring in the activity of neurons in the prefrontal cortex. When the animal is remembering both items (before selecting the target), these rings lie on separate “planes” within the brain. These planes are perpendicular to one another to keep the items separate. When one of the items is selected, the color rings rotate in order to align the colors for either item. This allows the brain to “read out” the color of the selected item, regardless of whether it was originally the upper or lower item.

“It is an important paper,” said Massachusetts Institute of Technology neuroscientist Earl Miller, who was not involved in this research. “Attention and working memory have often been discussed as being two sides of the same coin, but that has mainly been lip service. This paper shows how true this is and also shows us the ‘coin’ — the coding and control mechanisms that they share.”

“Our goal is not to overwrite the word ‘attention,’” said Buschman. Instead, he hopes that findings from decades of research on attention can be generalized to shed light on other forms of executive function. “Attention has been well-studied as the cognitive control of sensory inputs. Our results begin to broaden these concepts to other behaviors.”

“Shared mechanisms underlie the control of working memory and attention,” by Matthew F. Panichello and Timothy J. Buschman, appears in the March 31 issue of the journal Nature (DOI: 10.1038/s41586-021-03390-w). This research was supported by the National Institute for Mental Health (R01MH115042 to TJB) and the Department of Defense (a National Defense Science and Engineering Graduate Fellowship to MFP).