University recovers from Hurricane Sandy, 50 trees down on campus 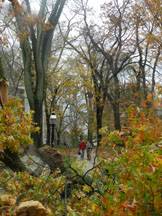 A man and a woman stroll on campus Tuesday, Oct. 30, and approach a downed tree near Dod Hall. The tree was being removed Wednesday, Oct. 31.

In the wake of Hurricane Sandy, about 800 University employees worked in shifts to provide services for undergraduate and graduate students who remained on campus during fall recess, and to keep other critical campus functions running.

At least 50 trees were felled by wind gusts during the storm, and there were dozens of reports of blocked roads, damaged vehicles, fences and other property. There were no injuries reported.

Hundreds of employees worked through the night Monday to switch most of campus to power from the University’s cogeneration plant, clear roadways, check buildings and provide general security.

"Those of us who lived through the hurricane know how much damage it has caused.  Thanks to the tremendous efforts of staff and managers in many departments across the University, the campus weathered the storm in much better shape than other areas," said Mark Burstein, executive vice president. "The same employees are now dedicated to reinstating essential services and research infrastructure as quickly as possible."

The University is closed today except for critical and essential staff. Dillon Gym and Firestone Library are open. Decisions about when the University will be fully open will be made on a day-to-day basis. 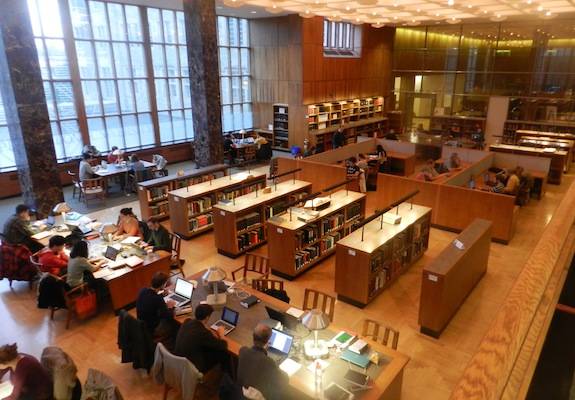 Students fill the desks at Firestone Library, which reopened Tuesday, Oct. 30, 2012, after being temporarily closed because of Hurricane Sandy.

"We are very fortunate that the University emerged from the storm with relatively minimal damage, thanks to the remarkably effective preparations and emergency response efforts across campus, and the cooperation and patience of our students, faculty and staff," said Provost Christopher Eisgruber. "I am very grateful to the people who have worked so hard, in demanding conditions, to keep our campus and our community safe. I hope that all academic services and research operations will be up and running very soon."

Cythnia Cherrey, vice president for campus life, lauded the students who remained on campus for their patience and cooperation." Time and time again our students have responded to challenges with a remarkably upbeat spirit, and it was evident during this storm," Cherrey said.

In the days before the storm, Facilities staff cleared storm drains, checked all buildings and placed sandbags around locations prone to flooding. Most University vehicles were moved to sheltered areas and backup generators were tested and put at the ready. The University also posted an announcement with storm preparation tips online and sent emergency notifications to the entire University community. 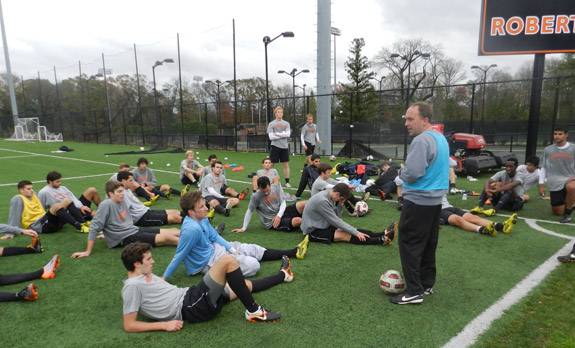 Players on the men's soccer team receive instruction from their coaches after practice Tuesday afternoon, Oct. 30, 2012.

The University’s McCosh Health Center was staffed day and night to handle emergencies, and staff there coordinated their preparations with local hospitals and Princeton First Aid and Rescue Squad.

The Office of Admission will be flexible in its Nov. 1 deadline for single-choice early action if Hurricane Sandy or any personal issues are making it difficult or impossible for applicants to file the appropriate forms. Applicants who need to file late should submit a brief explanation with their application.