Following the Monday, Sept. 19, faculty meeting, Dean of the College Nancy Malkiel issued the following message on behalf of the Faculty Committee on Grading regarding grading results for 2004-05:

The Faculty Committee on Grading today announced the initial results of the implementation of Princeton's new grading policy. "There is very good news in the grading results for each of the four divisions," the committee said. "Departments that were giving very high percentages of A grades are making real strides toward bringing their grades down; departments that were already grading according to the new expectations are continuing to hold the line. We are impressed by the seriousness with which members of the faculty have taken on the challenge of bringing grades under better control, and we are very pleased and encouraged by the progress that has been made. After so many years of steady grade inflation, we have actually been able to move the needle in the other direction, in a remarkably short period of time."

As the Grading Committee observed, "If each division succeeds in making as much progress this coming year as it did last year, we will have achieved our goal." 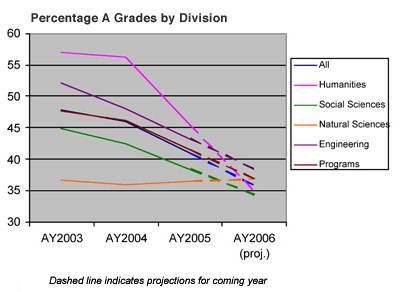 The Faculty Committee on Grading consists of six elected faculty members: Lynn Enquist, Molecular Biology; Michael Gordin, History; Martha Himmelfarb, Religion; Jaswinder Pal Singh, Computer Science; Anne-Marie Slaughter, Woodrow Wilson School; and T. Kyle Vanderlick, Chemical Engineering. The Dean of the Faculty, the Dean of the College, and the Registrar serve ex officio. The Committee's charge from the faculty is to assess the progress made in implementing the new grading expectations and to advise on ways of making further progress.

The Committee has begun the process of soliciting information from departments about strategies that have proven to be effective in bringing grades under better control. The early responses show that approaches vary widely. In Economics, for example, the department agreed on specific target percentages for A grades, depending on the type, category, and level of course. At the beginning of each semester, the chair reminded the faculty of the departmental agreement, adding that "any instructor who feels that there is a special reason to exceed the ordinary maximum may do so, but his or her grade sheet must be accompanied by a memo addressed to the chair explaining the circumstances."

In English, to take another example, the approach was to use the new grading expectations to enhance rather than abridge the ability of the faculty to employ their own expertise and experience to make informed grading decisions. The chair suggested to the faculty "that we view the policy as a tool to help us call grades as we see them and to resist the impulse to award high and higher grades for work we know is undeserving. Together we agreed that no one knew better than faculty themselves how to evaluate their students' work, and we decided that each faculty member would keep the expectations in mind and be trusted to do the right thing. Before mid-terms and once again before finals, colleagues were reminded via email of the new guidelines. We also distributed to faculty and preceptors guidelines about the meaning of particular grades, and we scheduled a special meeting with preceptors to discuss these. Upon reviewing the grade sheets in January, I concluded that efforts had indeed been honestly made to lower grades and we would stay this particular course."

Impressed by what it has learned already about the varied approaches in a subset of departments, the Grading Committee will ask all departments for information about strategies they have employed that have proven to be successful, as well as challenges they have confronted as they have attempted to implement the new expectations. After reviewing the information gathered in that process, the committee will disseminate a compilation of best practices and consider additional steps to assist departments in making further progress.

Commenting on the results for 2004-05, Dean of the College Nancy Malkiel congratulated the faculty on making significant headway in implementing Princeton's new institutional grading expectations. "Many departments are at or very close to the desired standards; in others, while there is more work to be done, the progress made in a very short time has been nothing short of remarkable. Culture change is hard to achieve, and we always imagined that it would take several years to implement the new grading expectations. We are clearly on our way."