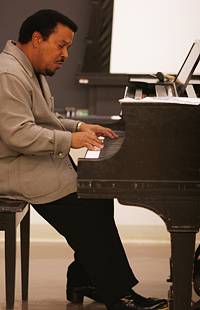 Princeton campus community members have undertaken a wide range of relief endeavors following hurricanes Katrina and Rita, including raising funds for aid to victims and welcoming displaced students and scholars to campus. One campus visitor, New Orleans pianist Wilson "Willie Tee" Turbinton, has been serving as a guest lecturer in the music department since October and will perform at 8 p.m. Tuesday, Jan. 10, in Taplin Auditorium, Fine Hall.

Efforts by members of the University community to aid victims of hurricanes Katrina and Rita are continuing both in the Gulf Coast region and on campus, while an upcoming concert will feature a major New Orleans jazz figure who has brought his talents to Princeton following the disaster.

Princetonians are playing a key role in helping Dillard University resume classes this month and committing to other hands-on relief efforts in the region. These are among many campus initiatives undertaken following the hurricanes, including raising funds to aid victims and welcoming displaced students and scholars. One campus visitor, New Orleans pianist Wilson "Willie Tee" Turbinton, has been serving as a guest lecturer in the music department since October and will perform at 8 p.m. Tuesday, Jan. 10, in Taplin Auditorium, Fine Hall.

Dillard, a historically black institution, was forced to shut down for the fall semester due to extensive damage to its New Orleans campus. It is scheduled to resume classes Jan. 9 at a downtown hotel and various campuses around the city. Since September, Princeton and Brown universities have been working with Dillard officials in a variety of areas -- from donating computers to providing critical administrative support -- to help restore operations and assist in long-term planning.

"The response from employees who have provided ideas and expertise in all kinds of areas has been very gratifying," said Karen Jezierny, Princeton's director of public affairs, who has been coordinating the University's participation in the partnership. "While Dillard is reopening in temporary quarters and substantial work remains over the longer term, the efforts of Princeton's community members have been a major source of support for this historic institution to get back on its feet."

Princeton will honor Dillard's president, Marvalene Hughes, at its Jan. 16 Martin Luther King Jr. Day ceremony in Richardson Auditorium, Alexander Hall. Hughes will be recognized for her leadership of Dillard, where she assumed office as president just two months before Hurricane Katrina struck.

In supporting Dillard's reopening, departments across the University have made numerous contributions:

In addition to the Dillard partnership, Princeton employees and students continue to plan trips to areas affected by hurricanes Katrina and Rita to help in the rebuilding process.

Recognizing the need for sustained assistance in those areas, Princeton has extended until Aug. 31 its Humanitarian Relief Effort Policy, which provides two weeks of paid leave for employees to volunteer with agencies working in the Gulf Coast such as the Red Cross and Salvation Army. Eleven employees have taken advantage of the policy to devote their time and skills to projects ranging from home rebuilding to supplies procurement to animal rescue.

"Whether taking advantage of this policy to travel or helping from afar, we appreciate Princeton employees' strong and ongoing support of those in need," said Lianne Sullivan-Crowley, vice president for human resources.

For the upcoming intersession break, the Student Volunteers Council is organizing trips to Mobile, Ala., and Abbeville, La., to continue the group's efforts to aid residents in those areas.

During fall break, 20 undergraduates traveled to the Gulf Coast to help rehabilitate homes and clean up hurricane damage in conjunction with Volunteer Mobile Inc. in Alabama and the United Way in Louisiana. Students worked alongside homeowners on tasks such as cleaning out mold-infested furniture and ripping out ruined floors and walls.

"Both groups worked a total of four days and had quite a bit of interaction with the community through meals and alumni in the area," said junior Aitalohi Amaize, who is coordinating the trips for the Student Volunteers Council. "Many of the students enjoyed the trips immensely and have applied to go again."

The continuing efforts build on numerous hurricane relief initiatives on campus since early September. As previously reported, in the fall semester the University temporarily enrolled 23 visiting undergraduates and five graduate students from affected schools. Tuition was waived for the visiting students, who also were provided with housing and financial aid. Also this fall, 15 visiting faculty members joined various academic departments under special programs to provide funding, offices and housing assistance for scholars from Gulf Coast institutions.

In October, pianist Turbinton -- a lifelong New Orleans resident who lost his home to Katrina -- took up temporary residency in the music department as a visiting lecturer. A renowned jazz and rhythm-and-blues pianist, Turbinton was invited by the department to lecture, perform and work with student musicians. Before departing Princeton later this month, Turbinton will present a free concert titled "An Evening With Willie Tee" on Jan. 10.

In addition to their trips to the Gulf Coast, Princeton students organized a variety of on-campus fund-raising events and discussions about the tragedy, while working to help assimilate the visiting students.

For more information about hurricane-related efforts at Princeton, visit www.princeton.edu/main/news/disasterrelief/.