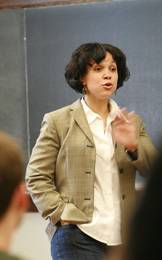 In her second semester at Princeton, Melissa Harris-Lacewell, a scholar of politics and African American studies, is juggling teaching, writing her second book, taking theology classes and providing frequent media commentary. Her combination of solid academic credentials and down-to-earth observations have earned her respect from students and colleagues alike.

Below left: Harris-Lacewell (in center of group) traveled with her class to New Orleans during intersession to meet with city leaders and residents.

From the March 12, 2007, Princeton Weekly Bulletin

Her father is African American and her mother is white. Of the four children from her parents' previous marriages, three are black and one is white. In the 1970s in the South, the family drew attention.

"It's quite possible that having a white parent and growing up in a multiracial family makes me even more interested in trying to figure out what's going on in an ordinary black experience, in part because I didn't experience it," said Harris-Lacewell, who identifies herself as African American. "I mean, my sister is like Barbie. … I think most black girls don't have a 6-foot white woman as the sister they grew up in the house with."

Harris-Lacewell, an associate professor of politics and core faculty member in the Center for African American Studies, joined Princeton last fall after seven years at the University of Chicago. Her research focuses on black political thought, religion and feminism.

As she enters her second semester, she is juggling teaching, writing her second book, taking theology classes, and providing frequent media commentary on topics ranging from criticism within the black community to U.S. Sen. Barack Obama’s presidential run — and raising her 5-year-old daughter, Parker.

Her combination of solid academic credentials and down-to-earth observations have earned her respect from students and colleagues alike.

"She has to be one of the most talented intellectuals of her generation," said Cornel West, the Class of 1943 University Professor of Religion. "She brings sophisticated quantitative skills, a sense of history and a synthetic imagination. That's rare among social scientists, and that's why I'm so thoroughly excited and inspired that she's here."

Harris-Lacewell has longstanding ties to academia and to Princeton. Her father was a professor at the University of Virginia and her mother taught at community colleges. Her uncle, Wesley Harris, was the first African American to receive a Ph.D. in engineering at Princeton in 1968.

After one year, however, she moved over to the political science program because, she said, she wanted to think about "the big questions" and not the nuts-and-bolts of policymaking. She eventually decided to study African American political thought.

What happened next surprised her. Her dissertation, on how blacks form political opinions through everyday conversations in places like barbershops and churches, landed her six job offers.

"I was like Sally Field — you really like this?" she said, referring to the actress' memorable Oscar acceptance speech. "Because to me, it felt very common sense."

Harris-Lacewell took a position at the University of Chicago in 1999. The intense intellectual environment there helped her develop her dissertation into an award-winning book, "Barbershops, Bibles and BET: Everyday Talk and Black Political Thought," published in 2004.

"Every day was a surprise about how much I didn't know and how much I needed to learn, so the book got better," she said.

Harris-Lacewell started doing media interviews for the book and found she enjoyed having a new forum for her ideas. Soon she was doing several interviews a day and writing opinion pieces for the Chicago Tribune. One morning, Matt Lauer of "The Today Show" quoted from an op-ed she had written about the racial rules constraining African American athletes.

"That was a good moment, a great moment, not because Matt Lauer was talking about my article, but because I felt like, 'Yeah, I actually studied this, this actually is what's happening, people. You might not like it, but it's happening,'" she said.

In fall 2005, she accepted a fellowship in what was then Princeton's Program in African American Studies. Once here, she said she gained fresh perspective on her research areas from discussions with professors in African American studies and politics. As she observed the diversity of the student body from her office in the Fields Center, she became interested in joining the University permanently. She especially agreed with President Shirley M. Tilghman's vision for Princeton, which included the establishment of the Center for African American Studies in fall 2006. 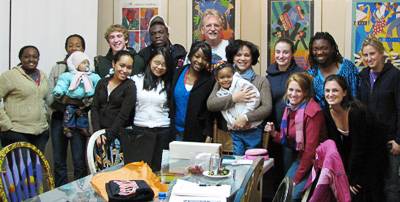 "Her sense of the intellectual importance of African American studies and her vocal support for a university that's engaged on a broader scale outside the university walls are things that are very important to me," Harris-Lacewell said.

In the summer of 2006, she agreed to come to Princeton. One of the most compelling reasons, she said, was that the politics department assured her she would be able to grow into a leadership role as a scholar of African American politics.

"I felt if I came, I'd have this opportunity to lead and to have some vision," she said.

Her colleagues already value her ability to blend everyday conversations, experiments, data and even literature into her research.

"What I like best is that she combines all this energy and cleverness with political passion, an eye for the big picture and a flair for communicating ideas," said Larry Bartels, the Donald E. Stokes Professor in Public and International Affairs.

Students say they appreciate her because she's real, in words and actions.

"The story goes something like this: 'Wow, that black person — John McWhorter, Armstrong Williams, Shelby Steele — they are really brave and independent thinkers because they’re willing to say something that counters what most of black America would agree with,'" Harris-Lacewell was quoted as saying. "'They’re willing to counter the traditional civil rights message. They must be so smart.' Well, I sort of think they’re big suck-up cowards who are willing to beat up on poor and marginalized people."

Senior Aitalohi Amaize, who took Harris-Lacewell’s course on "Disaster, Race and American Politics" and traveled with her to New Orleans (see related story), said, "There are things that need objecting to, and she stands for a lot of the values or opinions that are often left unsaid. She really has a commitment to the community side of things."

These days, Harris-Lacewell is working on her second book, "For Colored Girls Who’ve Considered Politics When Being Strong Was Not Enough," which she hopes to finish by 2009. It will examine the connections between shame, sadness and strength in African American women’s politics.

She refers to it as a "corrective" to the first book.

"By the time I finished the [first] book and it came out, I was much more of a feminist, who could clearly still deeply engage in questions of race, but was also a lot more suspicious about a lot of the things I had learned — particularly from black male sources — and much more cognizant of patriarchy and homophobia and the ways those things were intersecting our understanding of race," she said.

Understanding religion also helps her understand race and politics, she said. She is hoping to gain insight into all of them through her classes at Union Theological Seminary in New York.

"I’m amazed that black people across American history have been able to negotiate relationships with God that are so different from their relationships with the state," she said. "How could one be a slave and believe that God loves you?"

All of her research interests are characterized by that kind of tension.

"The religion thing is, for me, a culmination, a combination, of all of my interests in how ordinary people resist, how they develop meaning," she said. "Religion, the first book and the book around women, they’re all about contestation and how any time that we try to generalize about the black experience, we’re going wrong because there’s so much internal contestation."

She has been trying to provide such balance and depth in the coverage of Obama’s presidential run. She studied Obama alongside Alan Keyes in the 2004 Illinois senate race.

While the coverage has been mostly upbeat, the idea that African Americans do not identify with Obama has been overstated, Harris-Lacewell said.

She thinks, however, that the senator cannot win the presidency because white voters will not support him.

She would like to back those opinions with research, but the book is her main focus now, she said. However, two things would make her change her mind: to be hired temporarily as a social scientist by the Obama campaign, or if the Republican Party drafted an African American to run against Obama.

"Then I would drop the book. Then I would do anything. I would follow them around. I can't think of anything I would love more," she said, giddiness creeping into her voice. "American politics is just the best. It just doesn't get any better than an open seat on both sides."

For now, she's just watching the race while dividing her time among her many roles — writer, teacher, student, speaker, parent.

"My brain works better when I am thinking about a single idea or topic in multiple venues," Harris-Lacewell said. "It's not so much that I'm doing so much, but that doing one of them requires doing all of them."