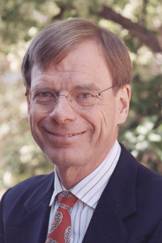 Francis Anthony (Tony) Dahlen, a Princeton professor of geosciences who was widely considered the top theoretical seismologist in his field, died of cancer June 3 at the University Medical Center at Princeton. He was 64.

Dahlen, a Princeton faculty member since 1970, conducted pioneering research on the waves generated by earthquakes -- known as "free oscillations" -- and developed theories that led to greater understanding of the structure of the Earth's interior.

"He came into the field of seismology when new types of instruments had just opened up a different frequency band of seismic oscillations: the very low frequencies -- much too low to be audible -- that are generated by big earthquakes and make the whole Earth ring, like a bell in a church tower," said Princeton geoscientist Guust Nolet. "Tony developed ways to unravel the structure of the Earth from observed perturbations in the frequencies of such oscillations. His theory enabled seismologists to 'image' the interior of the Earth."

"His pioneering role in this field led him to write (with Jeroen Tromp) what is widely considered the standard textbook on the theory of global seismology," Nolet said, referring to "Theoretical Global Seismology," which was published in 1998 by Princeton University Press.

Tromp, a graduate student of Dahlen's who earned his Ph.D. at Princeton in 1992, is now a professor of geophysics at the California Institute of Technology and director of Caltech's Seismological Laboratory. "Tony really was unique in seismology," he said. "He picked his own problems and did them his own way. His position as the foremost theoretician of his generation is unquestioned."

Dahlen continued in recent years to refine the study of the seismic waves generated by earthquakes to help explain the dynamics of the Earth's interior. In a major advance, Dahlen collaborated with Nolet, their graduate student Raffaella Montelli (a 2003 Ph.D. who is now a researcher with Exxon-Mobil) and other colleagues in probing the Earth's interior to produce the first visual evidence -- in the form of tomographic images -- of mantle plumes, which are giant spouts of heat that emanate from deep within the planet and are believed to cause island chains.

This discovery, Tromp noted, is "profoundly influential. Dahlen changed the way we do tomography."

Dahlen also was known for his pathbreaking work with Princeton colleague John Suppe on the "critical wedge" theory of how mountain belts are formed, which is "crucial for an understanding of the geology of regions like Taiwan where crustal layers pile up as if pushed by a bulldozer," Nolet said.

While Dahlen was renowned for his wide range of research contributions, he also was viewed as a skilled teacher and administrator and a dedicated, modest colleague who had a great love of science.

"He was always coming to seminars. He would always have questions. It didn't matter if it was in his field or not," said Robert Phinney, a Princeton geoscientist. "He was an extremely good adviser because he was interested in what everybody was doing. He put a great deal of effort into a personal passion for doing science."

Phinney recalled that colleagues, in turn, often attended Dahlen's lectures. "He practiced calligraphy, and what he did at the blackboard was a work of art," Phinney said. "We would sit in on his lectures, and he would fill the blackboard with very daunting equations, but his speech was so clear and so organized and his equations were so beautiful that we would all nod our heads in agreement as to how cool this was. His performance, in a good sense of the word, was so fabulous. Not many people can do that with equations."

Nolet said Dahlen was very generous with his time and ideas with students and colleagues. "He was great fun to share a drink with, or to chat with on a bike ride home. As a scientist, his understanding was very mathematical and his memory phenomenal," he said.

Tromp added that Dahlen was "admired for the clarity of his thoughts and papers" but that "he worried more about his students, postdocs and family than himself."

Born in American Falls, Idaho, and raised in Winslow, Ariz., Dahlen earned a bachelor's degree from Caltech in 1964 and a Ph.D. from the University of California-San Diego in 1969, a year before he came to Princeton. He served as chair of the Department of Geosciences from 2001 to 2006.

Dahlen is survived by his wife Elisabeth, son Alex and father Francis. Funeral arrangements were private. A memorial service is being planned for 2 p.m. Friday, Sept. 7, in the University Chapel.