Providing neuroscientists with a window to the brain

Cross-sectional brain images appear on the screen of Princeton's magnetic resonance imaging (MRI) scanner, located in the basement of Green Hall. One of the few MRIs to be located at an academic institution, the device permits neuroscientists to explore the links between human behavior and activity in specific brain regions. Image: Courtesy of the Center for the Study of Brain, Mind and Behavior

Top left: Close-up MRI scans can resolve brain regions as small as a cubic millimeter, allowing unprecedented insight into mental activity. Unlike full-body scanners in most clinical settings, Princeton's MRI is designed specifically to explore the brain. Image: Courtesy of the Center for the Study of Brain, Mind and Behavior

Above left: Christopher Moore, a graduate student in psychology, sits at the console of the MRI scanner. Behind the glass, postdoctoral researcher Per Sederberg helps prepare the machine to scan a test subject. The two are using the MRI to explore the nature of memory as members of Assistant Professor of Psychology Kenneth Norman's lab group. Photo: Denise Applewhite 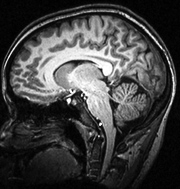 When Princeton neuroscientists want a close-up view of the brain, they need look no further than Green Hall's magnetic resonance imaging (MRI) scanner.

One of only a few of the devices located at an academic institution, the MRI is among the most sophisticated tools available at Princeton's Center for the Study of Brain, Mind and Behavior and constitutes the human brain imaging facility of the new Princeton Neuroscience Institute. It has been in nearly continuous use since its installation in November 2000, providing data for many campus psychologists and their collaborators from fields as varied as chemistry, molecular biology, mathematics and engineering.

The device has allowed Princeton neuroscientists to conduct a wide array of pioneering experiments, ranging from some of the most detailed studies of the brain's visual system ever to be carried out in a human, to the first studies of characteristically human faculties such as moral reasoning and economic decision-making.

The scanner provides a visual cross-section of the brain in real time, but uses a non-invasive technique that does no harm to living tissue. However, because the MRI generates a magnetic field that is about 60,000 times stronger than the Earth's, not even the smallest piece of iron or steel can be brought safely into the room with it.

MRI scanners in hospitals and other clinical settings often are used to probe the entire body to reveal conditions ranging from blood clots in the kidneys to artery disease in the heart, but Princeton's machine is specially designed to focus exclusively on brain study.

"For this reason, it is smaller than other scanners, and a test subject's entire body does not need to pass entirely into the machine," said Karthik Prabakharan, the facility's magnetic resonance engineer. "Only the head to the stomach goes inside."

The center has also integrated the MRI with other forms of real-time sensing that track eye motion and changes in the skin. Observing these other types of responses permit a more comprehensive understanding of how the brain reacts to the world.

The University's planned new buildings to house the neuroscience institute and psychology department -- to be located south of the Icahn Laboratory -- are expected to include space to significantly expand the MRI facilities.