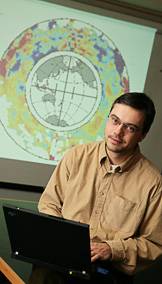 Geoscientist Frederik Simons sits before a cross-sectional map of the Earth, showing a model of seismic wave speeds through the crust and mantle. The land and seas (outlined in the center) are surrounded by colors representing the waves' different velocities, which are affected by the Earth's density and temperature. Blank spots around the edges indicate regions where, because of limits of sampling by land-based seismometers, researchers still have no information. Simons and his team are developing floating sensors called MERMAIDs in order to help fill in these gaps. (Photo: Denise Applewhite.  Background image: Courtesy of researchers at the Massachusetts Institute of Technology)

The prototype MERMAID, about 1.5 meters in length, is shown in the laboratory. Inside the metal tube are communications and recording equipment as well as pumps for submerging and surfacing. Mounted on the side is a hydrophone capable of hearing the faint rumbles of earthquakes and other seismic events that ripple through the planet and up into the oceans from the sea floor. (Photo: Courtesy of Frederik Simons)     At left: The MERMAID is designed to hang between the surface and sea bottom at a depth of up to 1,500 meters, depending on where its opportunities for detecting earthquakes are thought to be optimal. Upon sensing a quake, it will surface, transmit its findings to a satellite, and return to its post. (Photo: Courtesy of Frederik Simons)

Princeton Earth scientist Frederik Simons believes the answers to questions about such unpredictable and destructive acts of nature as earthquakes and volcanoes might best be found floating in the ocean.

Despite hundreds of seismometers and geological studies, scientists still have an imperfect understanding of what happens deep within the planet where these phenomena begin. Simons has developed a custom-made, free-floating sensor that could provide a clearer picture of the Earth's interior by using the additional perspective only the oceans can provide.

"We'd essentially like to take a CAT scan of the Earth," said Simons, an assistant professor of geosciences. "But all we really have are land-based seismometers. That leaves more than 70 percent of the Earth's surface uncovered -- it's kind of like putting your head in the CAT scanner with a metal plate blocking most of the sensors. You're just not going to get a very good image of what's inside."

Land-based seismometers have been used for decades to record and measure the movements of the Earth's surface, especially the minute vibrations produced by distant, deep earthquakes and other seismic events. As these waves pass through the planet, they are bent, reflected and refracted by the different types of material in the interior, similar to the way light rays are altered when they pass from air to water. Careful analysis of seismic waves has helped in determining the planet's makeup, but seismometers' limited coverage of the surface has provided only blurry, incomplete images.

Simons' creation, called MERMAID -- short for Mobile Earthquake Recorder in Marine Areas by Independent Divers -- might improve science's vision. The torpedo-shaped device is designed to dive up to a kilometer beneath the waves and hang between the surface and sea floor, listening for the slow vibrations that come from earthquakes across the planet. When it hears something interesting, it will surface, transmit its data to a satellite, then submerge again -- up to 150 times before its batteries need a manual recharge.

"If we can perfect the MERMAIDs, we might be able to start filling in some of the blank spots on our picture of the planet's interior," Simons said. "Underwater seismometers that sit on the ocean bottom exist, but they are expensive and often unreliable. We think that with a bunch of floating hydrophones, we might be able to do better."

Though they are not in direct contact with the Earth's solid surface, hydrophones, which are also the listening devices used in sonar, can detect the low-frequency sound waves that emanate from the ocean floor. A group of hydrophones spread through the oceans would not only allow Simons to probe the many subterranean regions that remain unexplored, but also to improve the clarity with which his colleagues can "see" regions that are familiar.

Only recently has technology sufficiently evolved to build MERMAIDs that can accomplish these tasks, though the inspiration for them first stirred in another Princetonian's mind a generation ago. 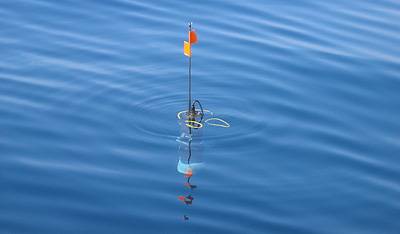 "When I was on sabbatical at the Scripps Institution of Oceanography in 1988, I had the idea to explore some of the data they acquired with underwater instruments," said Guust Nolet, the George J. Magee Professor of Geoscience and Geological Engineering. "I did discover one weak earthquake signal, which was enough to raise my interest."

Nolet, who has an abiding interest in exploring the Earth with seismic waves, thought it might be possible to build sea-based equipment for his research, but found that the instrumentation at the time was too expensive.

"The time wasn't ripe yet," said Nolet, who is retiring from Princeton this year. "But when Frederik came to Princeton a few years ago as a postdoctoral fellow, oceanographers had developed floats that were a lot more affordable, so I suggested to him that this might be something to explore."

Nolet has praised Simons' subsequent efforts to develop the MERMAIDs, which may help solve mysteries that have existed since Nolet's career began.

The Earth's oceans lie on top of the planet's crust, a layer of relatively cool and solid rock that stretches down a few kilometers. Below the continents, the crust is a few dozen kilometers thick. This outer shell of the Earth is fragmented into about 50 irregularly shaped chunks called tectonic plates -- all of which grind against one another as they float upon a far deeper, very different sort of ocean.

This "ocean" is not made of water at all, but of warm, malleable rock. Called the mantle, it is the thickest of the planet's layers, stretching some 2,900 kilometers toward the Earth's core, about as far as the distance from Manhattan to Salt Lake City. This murky region is not quite warm enough to liquefy completely, but the intense heat radiating from the planet's core of molten iron gives the mantle an oozy consistency that geophysicists liken to Silly Putty.

"The rock down there is flowing, but it's not fast and hot like lava," Simons said. "It only moves a few centimeters a year at most."

The convective currents in this slow-motion ocean can take millions of years to push rock an appreciable distance, but they are responsible for the drift of continents across the planet and the rumbling of earthquakes as the plates collide. And while the mantle is not liquid through and through, rising "plumes" of hot buoyant material sometimes make it all the way up to the surface, melting in places, where volcanoes then sprout "hot spots" such as Hawaii.

Simple though plumes are to imagine, the uncertain details of their development have sprouted quite a volcanic debate among Earth scientists, including a contingent at Princeton. Do these plumes rise from all the way down, like elevator shafts from the Earth's core, or might they develop at shallower depths? Are they essentially straight, or is their formation more complicated?

Seismometers help, but only sometimes. Waves from earthquakes are altered as they pass by a plume, offering clues to its nature -- if only scientists can capture them.

"It's easy to imagine magma penetrating the crust and creating a place like Iceland," Simons said, referring to the island's still-sputtering volcanoes. "But we still don't know very well at all how deep Iceland's plume goes. Take a few seismometers and plant them right atop the island, and you'll only get a narrow view of the deep Earth. It's a bit like closing one eye -- you lose your depth perception."

This is the irony of confining seismometers to small patches of dry land: They are meant to explore the mantle's deeps, but are often limited in their sense of depth. Simons said that Earth scientists have argued passionately for years over whether there is a deep-seated mantle plume beneath Iceland, but do not have enough information to settle the debate -- a problem that a few MERMAIDs might solve.

"With a dozen or so of these instruments, we could get a more nuanced sense of what's happening," Simons said. "We could gain the sort of three-dimensional perspective that a second eye provides, and finally complete the CAT scan of the Earth in all those difficult areas."

Before members of Simons' team can answer questions about Iceland, let alone the rest of the planet, they need reliable MERMAIDs to do their listening. At this point, his team is still refining its single prototype, which was built with the assistance of engineers and hydrophone specialists at Scripps, a part of the University of California-San Diego.

"We have deployed the MERMAID three times on shakedown missions off the San Diego coast," said Jeff Babcock, a project scientist at Scripps who works on the hydrophone. "It's an appealing project because if you put a single station at the bottom of the ocean, it would cost millions of dollars to install and maintain. If our team can surmount the technical challenges of the MERMAID, though, it should make for a much more viable solution."

So far, the team's challenges have proved numerous but surmountable: Their underwater listening device is a bit too good at hearing nearby earthquakes, and can get sidetracked by ship noise and the local marine life.

"The mechanism picks up nonseismological sounds, such as whale songs," Simons said, "And local quakes drown out the sound of the faraway ones that we really need to image the Earth's deep interior. It's tough because we are trying to hear very faint sounds that have their energy below one hertz, about as low as you can go."

Simons likens it to trying to hear a song being played in a dance club while standing in noisy traffic outside. "The thick walls are like the kilometers of Earth the more distant vibrations have to penetrate -- only the deep bass notes can get through," he said. "Noise, from nearby earthquakes -- and the whales as well -- mask the low throb of a vibration coming in from across the planet. But we're getting there. Fortunately, we know what songs we're listening for, and digital signal processing techniques have become very good in the last decade or so."

Simons said they aim to drop their prototype into the ocean and tweak its hydrophone a few more times to perfect its hearing. Once they have finished, the team's goal is to obtain enough funding to build more. The entire Pacific Ocean, encircled by enough volcanoes and other geological activity to be labeled the "ring of fire," awaits their exploration, not to mention other hot spots around the globe.

"The next project would be to take 20-odd MERMAIDs and go right to one of the blank spots on the map," Simons said. "There are still a lot of them, and it would be great to start filling them in at last."