Ainslie chosen as vice president for finance and treasurer 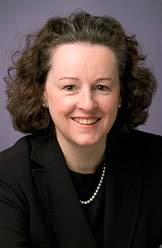 Carolyn Ainslie, an accomplished financial management executive, has been selected as vice president for finance and treasurer at Princeton University. Her appointment is effective Oct. 1.

Ainslie, who has been vice president for planning and budget at Cornell University since 1998, will succeed Christopher McCrudden, who will take on a new role as vice president and senior adviser to President Shirley M. Tilghman.

Ainslie will join Princeton's leadership team during a time when it has committed to a set of major investments to fortify and expand the University's distinction in teaching and research, increase the size of its undergraduate student body and complete a 10-year capital program that will add significant buildings to the campus. To finance these plans, the University will continue to rely on the exceptional performance of its endowment managers and on the largest fundraising campaign in Princeton's history -- an effort launched last fall to raise $1.75 billion over five years.

"I am very pleased that Carolyn has agreed to join our senior leadership team at Princeton," said Tilghman, to whom Ainslie will report. "She is a highly regarded and seasoned manager with more than 20 years of experience in a university setting and a reputation for being unusually thoughtful, perceptive and decisive. We are confident that she will provide the strategic financial counsel and the strong management we need to realize our aspirations in the areas for which she will be responsible."

Ainslie will oversee six main offices at Princeton: asset administration; budget; controller; operations; payroll, payables and taxation; and risk management. McCrudden, whose new role was announced last November, will continue to oversee the Office of Real Estate Finance and the office that manages the University's land holdings at Princeton Forrestal Center. He also will advise Tilghman on a range of strategic matters related to Princeton's financial planning.

"I have known Carolyn for many years and have great admiration and respect for the important role she has played in managing the finances of a complicated peer institution," McCrudden said. "I look forward to partnering with her in an effective and seamless transition."

Ainslie has overseen budgeting and planning organization and processes that have resulted in a decade of balanced budgets at Cornell. She was one of the architects of a new financial aid policy the university announced this year to improve accessibility. This spring, she was responsible for coordinating Cornell's response to a request from the U.S. Senate Committee on Finance for policies and practices relating to endowment management and spending, college costs and student aid. Cornell, Princeton and 134 other colleges received the request on Jan. 25 and were asked to respond within 30 days.

Ainslie earlier designed and led the University Workforce Planning Initiative at Cornell, a comprehensive review of non-academic staffing that, among other achievements, clarified key points of responsibility and accountability within each functional area. The goal of the effort was to establish agile, responsive and cost-effective support systems and structures that were scalable for anticipated growth and adaptable to changing program needs.

"I am honored and excited to be joining the leadership team at Princeton," Ainslie said. "I look forward to working with the many dedicated staff and faculty to build on the strong history of financial stewardship of this great institution."

Previously, Ainslie held positions in accounting and auditing for three years at GTE in Durham, N.C. A graduate of Bucknell University, she earned an MBA from the University of Rochester.

Ainslie serves on the boards of trustees of eCornell, an online learning company owned by Cornell University, and Kendal at Ithaca, a continuing care retirement community with close affiliations with the university.

Matteo named vice president for finance and treasurer at Princeton