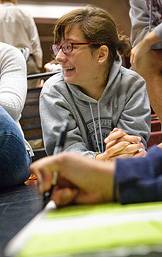 Students selected for Princeton’s first Bridge Year Program came to campus for a five-day orientation intended to inspire, train and build team spirit. The program allows 20 students to defer the start of their freshman year to spend a tuition-free enrichment period abroad focused on public service. This year students are based in Ghana, India, Peru and Serbia. Here, Katherine Mount of Winston-Salem, N.C., worked on a team-building exercise before heading to Serbia.

The 20 students selected for Princeton's inaugural Bridge Year Program have departed for their extended period of international service, propelled by the inspirational words of University President Shirley M. Tilghman. 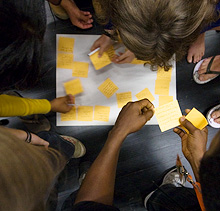 As part of a group exercise, students wrote down the principles that will guide their conduct throughout their international service missions.

During an Aug. 26-30 orientation on campus, the students met with Tilghman, who explained the origins of the program, which enables students to defer the start of their freshman year to spend a tuition-free enrichment period abroad focused on public service.

In discussing the origins of the program, she reminded students of the University's informal motto, "In the nation's service and in the service of all nations." She also talked about her own experience teaching chemistry at a small high school in Sierra Leone for two years after college, calling it "the best thing I ever did." Tilghman, a member of the molecular biology faculty before being named president, said that the experience helped her realize her passions for biology and teaching, and gave her an invaluable perspective and understanding of human nature.

"Imagine how you're going to be transformed by these nine months, and imagine how that's going to affect your choices about how you're going to spend your time at Princeton," Tilghman said to the students gathered in the Icahn Laboratory auditorium. "These nine months are going to change your life. And when you come back, the way you think about organizing your education is going to be different, the way you decide what to do outside the classroom is going to be different. We see you as wonderful spokespersons on campus for the importance of international experiences, and for public service." 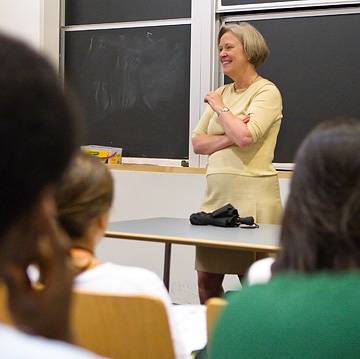 When Princeton President Shirley M. Tilghman met with the Bridge Year students, she told them her own international service experience of teaching high school in Sierra Leone was "the best thing I ever did" for both her professional and personal growth.

The students have traveled in groups of five to Ghana, India, Peru and Serbia, and in each location Princeton has partnered with an international learning organization to coordinate the students' activities. Over the next nine months, they will volunteer with local service organizations, learn a new language and immerse themselves in the local society through homestay with a local family, cultural enrichment activities and in-country travel. These students, who applied for the Bridge Year in May after they were admitted to the University, will begin their studies as freshmen in fall 2010. Princeton is paying the core program costs for all students, as well as providing need-based supplemental funding to assist with the costs of airfare, health insurance and other incidental expenses.

The students were selected for the program on the basis of their openness, maturity, flexibility, courage, resourcefulness, eagerness to be challenged and commitment to service abroad.

Tilghman asked the students to explain their reasons for participating in the program, and most said that it was an opportunity they felt they couldn't pass up.

"I had been flirting with the idea of a gap year but never took it seriously until this opportunity came along," said Agnes Cho of Los Angeles, who chose to go to Peru, a country she has previously visited. "I really enjoyed the country, and I was really drawn to the sustainable development component."

Jessica Haley of La Crosse, Wis., decided to apply to Princeton only after hearing about the Bridge Year. She had participated in weeklong service trips to Haiti that felt incomplete and was excited about the prospect of serving on a deeper level through the program, she said.

"It's a way to serve that will let me be integrated into a place and build relationships," said Haley, who chose to go to Ghana. "I think I'll miss my family and friends, but that will be mitigated by the new relationships I'm developing."

Some students said they expect the experience to be difficult but want to challenge themselves. 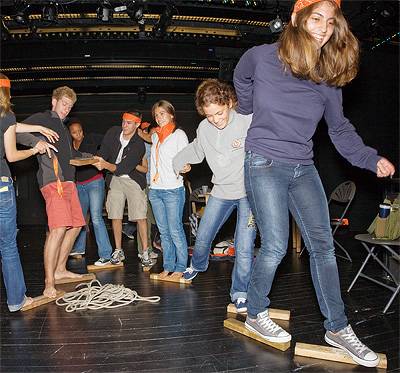 The Bridge Year students engaged in several group exercises, illustrating the importance of teamwork and helping them get to know their fellow program participants. In this exercise, students worked together to create an imaginary French-fry bridge (represented by wooden blocks) to cross a vat of oil (the floor).

"I chose the Bridge Year because I wanted to see what kind of positive impact I could have on the world as an undergrad," said Elizabeth Martin of Lewisville, N.C. "I also wanted to do something that's really far outside of what's comfortable for me. I haven't traveled a lot. I picked India for a lot of reasons, partly because I think it's maybe the most different from the way I'm used to living. There's a lot of potential for me to grow through this experience."

Alex Rafter of Portola Valley, Calif., is spending the year in Serbia. "What really drew me to the program as a whole was the opportunity to bring a new perspective not only to my college experience but also to my life," he said. Later, he added, "My hope is to be able to have a clear sense of what I'm passionate about. I also think this experience will humble us, and that I'll realize that there's a lot I still have to learn."

In addition to the conversation with Tilghman and other meetings with administrators, the students' orientation included sessions on communications and technology, exploring a new culture, health care and safety, stress management and working in a cross-cultural context. Activities such as social events with current Princeton students and games for team-building were part of the orientation as well.

Throughout the program, students will have support from the University's partners -- ProWorld Service Corps in Peru, World Learning in Ghana and Serbia, and Where There Be Dragons in India. The partners have hired program directors who will meet weekly with students and maintain a Bridge Year office for students to visit, said John Luria, director of the Bridge Year Program.

"We recognize that these students are 18 years old, and we have worked closely with our overseas partners to design an extremely challenging yet supportive experience," Luria said. "We sought out organizations that could provide the highest level of participant health and safety, as well as the most appropriate service placements for our volunteers. In addition, our idea was to create a program that would involve a variety of meaningful opportunities for reflection -- ones that will help students through their cross-cultural adjustment and facilitate the immense learning and personal growth that comes from international service work."

During one orientation session, Bridge Year students were told to break into teams based on their program destinations and to create lists of words that represent the principles they will follow throughout their service experiences. Here, the group traveling to Serbia discussed the words they would write on orange bandanas and carry with them for the next nine months.

The program directors were on campus for the orientation to help ease the transition.

"It was particularly important to meet the parents, to reassure them that their children would be OK," said Svetlana Kijevcanin, World Learning's Bridge Year program director in Serbia. "I'm so thrilled and excited. With just five students, it's a great group that I can be devoted to."

The Bridge Year Program will have common elements in each country, such as an orientation period, homestays, language training, placements in nonprofit organizations and schools, the weekly meetings with the program directors, cultural enrichment opportunities, travel excursions, a year-end group service project and a program wrap-up retreat. Yet each of the four locations will have some important differences, such as the focus of service opportunities

In Ghana, students first will live in the city of Accra, where they will work with development issues or with special populations such as abandoned children or teenage mothers. They then will live in a rural community near Kumasi, working in junior high schools. They will study the Asante Twi language.

In India, students will live in the city of Varanasi, with most service placements focusing on the education and empowerment of some of the city's most disadvantaged children. Students will learn Hindi.

In Peru, students will be based in the small town of Urubamba, working in the areas of health, environment, or social and economic development. Students will receive lessons in Spanish and, if they are already fluent, they can choose to study Quechua, a language spoken by the region's indigenous people.

The University hopes to expand the Bridge Year Program in years to come, based on feedback from the students and through targeted fundraising. 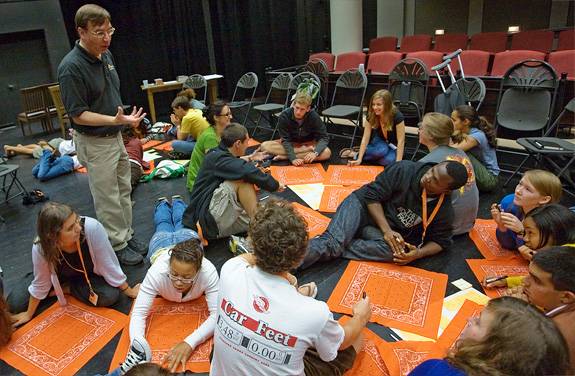 As part of their orientation, Bridge Year students spent a day with Rick Curtis (standing left), director of Outdoor Action, for sessions on experiential learning and team-building that will serve as a foundation for their nine months abroad.

Students finding their place in the world through Bridge Year Program