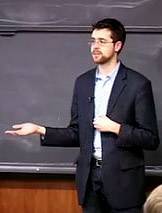 Princeton computer scientists Edward Felten and Stephen Schultze have collaborated with graduate students to launch two Web-based technologies that improve the transparency of government by making court records and the federal government's "newspaper," the Federal Register, easily accessible online. The project partially originated with a talk in February at Princeton by Schultze (above), who was then at Harvard University, focusing on the fact that people who want to access federal court records through one system have to pay a fee for them. (Image: Courtesy of the Center for Information Technology Policy)

Edward Felten and Stephen Schultze use computers as flashlights. The Princeton computer scientists recently oversaw the launch of two Web-based technologies to illuminate the workings of government by making court records and the federal government's "newspaper," the Federal Register, easily accessible online.

One of the technologies, dubbed RECAP, is an extension for the Firefox browser that gives users free access to records from PACER, the pay-per-page system for accessing records of the U.S. Federal District and Bankruptcy Courts. PACER stands for Public Access to Court Electronic Records; RECAP is PACER spelled backward.

The other, FedThread, is a website that helps people parse the Federal Register, a daily publication of the federal government that provides highly detailed coverage of important rules, proposals and actions taken by the government.

Felten and Schultze are the director and associate director, respectively, of the Center for Information Technology Policy (CITP), a joint venture of the Woodrow Wilson School of Public and International Affairs and the School of Engineering and Applied Science that addresses crucial issues at the intersection of society and computer technology.

"Both of these projects evolved from a paper we published in the Yale Journal of Law and Technology," said Felten, a professor of computer science and public affairs. "In that paper, we argued that the best way for the government to be transparent with digital information is to make it available in a raw but usable format and let the public decide what to do with it. The idea was to do more by doing less. The government can't predict and shouldn't limit what people will do with the data. So make it accessible but don't insist on processing it for them." 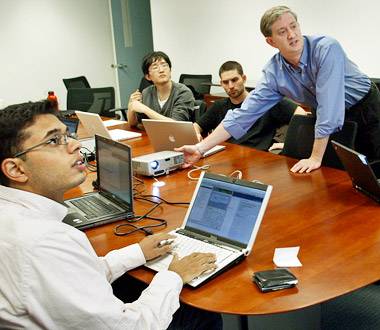 Felten (at right) also has been teaching a course during the fall semester called "Civic Technologies," which focuses on designing and building technologies that serve the public good. (Photo: Frank Wojciechowski)

After the U.S. Government Printing Office announced in September that it planned to release the Federal Register in the Web language XML, the Princeton students scrambled to build FedThread. The site, which allows users to more easily find and share documents and to follow certain policy issues, went live on Oct. 5, the same day the XML feed was released.

"The graduate students built the entire system from scratch in 10 days," Schultze said. "They literally worked around the clock, with one or two of them dropping off every few hours to grab some sleep and then return to their computer screens. They showed remarkable teamwork in a marathon relay race of coding."

In announcing the release of the new XML format, the White House blog and the administration's "Open Government Progress Report to the American People" mentioned FedThread and Public Resource, a nonprofit transparency organization that uses the new feed to publish its own version of the register.

"The Center for Information Technology Policy and other organizations, such as Public Resource, demonstrated the tremendous value of this collaboration between government and the American people," said Beth Noveck, the White House's deputy chief technology officer for open government. "Together, we're innovating to transform the Federal Register -- the newspaper of our democracy -- into a new platform for citizen engagement and participation."

The RECAP project originated with a talk in February at Princeton by Schultze, who was then a fellow at Harvard University's Berkman Center for Internet and Society before joining the CITP staff in the fall. The talk focused on the fact that people who want to access federal court records through the PACER system have to pay a fee for them, a hurdle that makes the information inaccessible to those who can't afford the fees.

"It seemed like something was very wrong that the public did not have free access to court records," Felten said.

In August, the CITP team, in collaboration with Schultze, launched RECAP, which allows people who purchase digitized court records from the PACER system to contribute the documents to a freely accessible repository stored by the Internet Archive in San Francisco. Other RECAP users can then search the repository and download the files for free and legally avoid paying the government-imposed fees for public records. In addition, the system offers a more comprehensive search function.

While other organizations, including Public Resource, have republished PACER documents online for free, RECAP harnesses the power of online social networking to allow people to share federal court documents. The repository currently holds more than 1.5 million court documents and is being used by lawyers, academics, students and journalists among others.

"The system is humming along now, and we're building the document repository," Felten said.

The projects to improve government transparency and provide easier access to public information inspired Felten and Schultze to organize a two-day workshop that will examine how digital technologies are transforming citizen access to government. The workshop, titled "Open Government: Defining, Designing and Sustaining Transparency," will take place from 8 a.m. to 5 p.m. Thursday and Friday, Jan. 21-22, in the Friend Center Convocation Room.

Felten also has been teaching a course during the fall semester called "Civic Technologies," which focuses on designing and building technologies that serve the public good. Students have worked on a range of projects, including a system to help UNICEF researchers in Senegal to conduct health surveys through mobile phones. Another project has involved creating a website that provides scientists and health organizations with better access to important malaria data.

"It's not written in stone what the students will build," Felten said. "Given access to raw data, people can do things you don't expect."