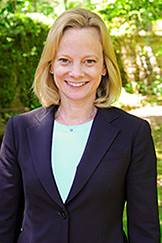 Following a search process to permanently fill the executive vice president position, Williams was recommended by President Christopher L. Eisgruber and was approved by the Board of Trustees at their Nov. 16 meeting.

"I am thrilled that Treby Williams has agreed to serve as Princeton’s executive vice president," said Eisgruber, to whom Williams will report. "People throughout our campus admire Treby's intelligence, character and commitment to this University. During her time as acting executive vice president, she has won plaudits for her managerial skill, handled stressful circumstances with aplomb and contributed adeptly to discussions of strategic issues."

Eisgruber added: "Treby distinguished herself in a search that produced an unusually strong field of candidates. She will be an exceptional leader for this University's administrative units, and Provost David Lee and I could not ask for a better partner as we approach the challenges and opportunities that lie ahead."

As executive vice president, Williams will oversee the areas of audit and compliance, campus life, facilities, human resources, safety and administrative planning, and university services. Among many duties, she will begin planning for the University's next long-term campus plan and capital construction program, as well as lead University committees focused on environmental safety, risk management, compliance, and increasing efficiencies across administrative and academic departments.

"I am honored to help advance Princeton's mission in my role as executive vice president, and I look forward to partnering with President Eisgruber, Provost Lee and colleagues across campus on forthcoming University priorities," said Williams, a Class of 1984 Princeton graduate. "The departments that the executive vice president oversees have strong leadership and working with those teams is a privilege."

Williams previously served in the Office of the Executive Vice President as director of planning and administration, and as assistant vice president for safety and administrative planning.

During her years in the office, Williams has worked on a number of University-wide initiatives, including:

Before joining the Office of the Executive Vice President, Williams was director of Princeton's Office of Development Priorities for two years.

Previously, Williams was an assistant U.S. attorney in the southern district of New York and the district of New Jersey from 1992 to 2004. She also worked for three years for Coudert Brothers in London and New York.

Williams earned a bachelor's degree in history from Princeton and a law degree from New York University.