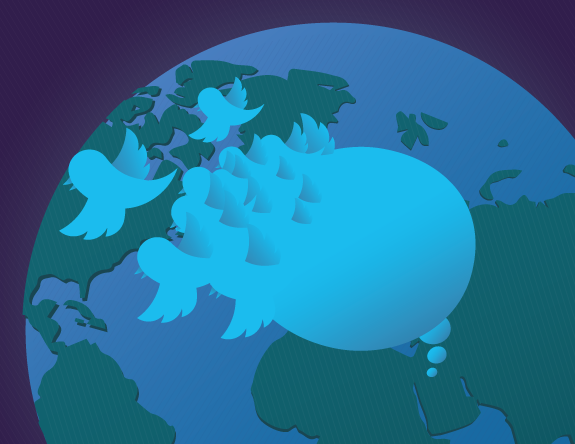 Analyzing millions of Arabic tweets offers insights into how residents of the Middle East view the United States. (Illustration by Kyle McKernan, Office of Communications)

An analysis of millions of Arabic-language tweets confirms high levels of anti-Americanism there, provides new and interesting information about attitudes in the Middle East toward particular U.S. actions, and charts a path for using Twitter to measure public sentiment in ways opinion polls cannot.

The findings also highlight policy challenges — and opportunities — for the United States in the Middle East, said Amaney Jamal, a professor of politics at Princeton University who conducted the research with colleagues at Princeton and Harvard University.

"Can the U.S. alter the image of itself in the region, especially in this era of terrorism where groups like ISIS are mobilizing on anti-American platforms?" Jamal said. "The policy implications are serious."

The researchers used a tool created by Boston-based social media analytics firm Crimson Hexagon to examine Arabic reaction on Twitter to major events in 2012 and 2013, including Hurricane Sandy striking the United States, the possible U.S. intervention in the Syrian civil war, the firestorm over the "Innocence of Muslims video," the Boston Marathon bombing and the removal of Egyptian President Mohamed Morsi.

Crimson Hexagon's analytical tool used search terms and sample tweets organized by the researchers around each event to identify and categorize all relevant tweets mentioning the U.S. from among every public posting on Twitter.

"If you want to know how people in a given society who are on Twitter are reacting to events in real time, this is a great way to find out, so long as there is no systematic censorship," said Robert Keohane, a professor of public and international affairs at Princeton and one of the researchers. "You get quite a reliable sense of the reaction of a certain part of the public to these events and you can differentiate the types of reaction."

The researchers presented a paper on the work, "Anti-Americanism or Anti-Interventionism? Evidence From the Arabic Twitter Universe," at the annual meeting of the American Political Science Association in August. Along with Jamal and Keohane, the authors are David Romney, a doctoral candidate at Harvard, and Dustin Tingley, an associate professor of political economy at Harvard, who holds a Ph.D. from Princeton.

The analytics tool identified and categorized more than 2.2 million Arabic tweets around the time of the overthrow of Morsi in 2013 that mentioned the United States.

"No matter which side of the domestic dispute an individual was on, he or she was likely to be opposed to the United States," the researchers wrote. "Rather than an enemy of an enemy being a friend, the U.S. is consistently cast as an enemy."

Similarly, in analyzing tweets regarding the Syrian civil war, "97 percent of tweeters who expressed political views are antagonistic toward the United States, despite the fact that the United States opposed the Assad regime, which was also opposed by many Arab tweeters," the researchers wrote.

In contrast, an examination of tweets in reaction to Hurricane Sandy striking the U.S. found that nearly 30 percent of Arabic tweets offering an opinion expressed concern about Americans, defended Americans or were positive toward the U.S. government's response.

"Reactions to cases where the U.S. is influencing Middle Eastern affairs are 95 percent to 99 percent negative," Keohane said. "Responses to American society, as in the Hurricane Sandy monitor, are much less negative."

The results of the analysis offer important insights for the ongoing debate about whether residents of the Middle East are inherently anti-American or responding to American policies, the researchers said.

"It's not true that these people just hate the United States," Keohane said. "But there's a very deep dislike of American intervention and an unwillingness to give the U.S. credit even when it is on their side. I think it's going to be a very long road for the U.S., and the U.S. shouldn't expect to get a huge amount of public support from the Arab world."

To further test their ideas that perceptions of the U.S. impinging on Middle Eastern nations influenced sentiment more than perceptions of U.S. society, the researchers also examined tweets commenting on Iran's involvement in the Middle East. Arabic tweeters were even more negative about Iran than the United States.

"Iranian society and U.S. society are very different," Keohane said. "If the fundamental reactions were to the type of society, they might hate the U.S. and like Iran. But what the U.S. and Iran have in common is that they are powerful non-Arab countries that intervene in the Middle East."

The researchers say they are continuing to explore the best ways to use such Twitter data to capture public opinion, particularly in regions such as the Middle East and Africa where conducting opinion polls is especially difficult and expensive.