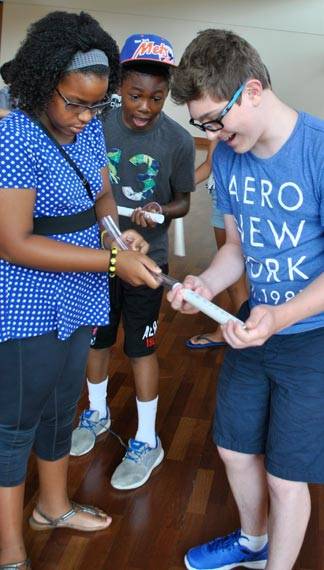 Photo by Tatiana Evans, Class of 2018, for the Pace Center for Civic Engagement

More than 40 middle school students attended STEAM Camp this summer from June 29 to July 31. The camp was expanded this year from STEM to STEAM, integrating arts into the science, technology, engineering and math curriculum. Each week focused on different themes: engineering and media arts; biology and performing arts; technology application and visual arts; and environmental science and creative writing.

"Our goal is to expose campers to real-life applications of science in engaging and fun ways that will support their academics," said Pace Center Assistant Director Charlotte Collins, who leads Community House. "We also want them to apply what they learn here when they return to school, as well as see how they could possibly have a career in these fields."

Community House, which is part of the Pace Center for Civic Engagement, has organized a summer camp for 11 years as part of its longstanding commitment to closing the achievement gap among minority and low-income children in the Princeton area. Participating students attend for free. Princeton students lead the camp with support from University staff and alumni.

For the campers, the program's appeal is in the hands-on and interactive activities.

"I like that it's a summer camp because it's educational and we are learning a lot," said 13-year-old Nandita Ammanamanchi, a student at John Witherspoon Middle School in Princeton. "We do have to write down labs and take notes. But at the end there is always some fun aspect, like making food or going on a field trip." 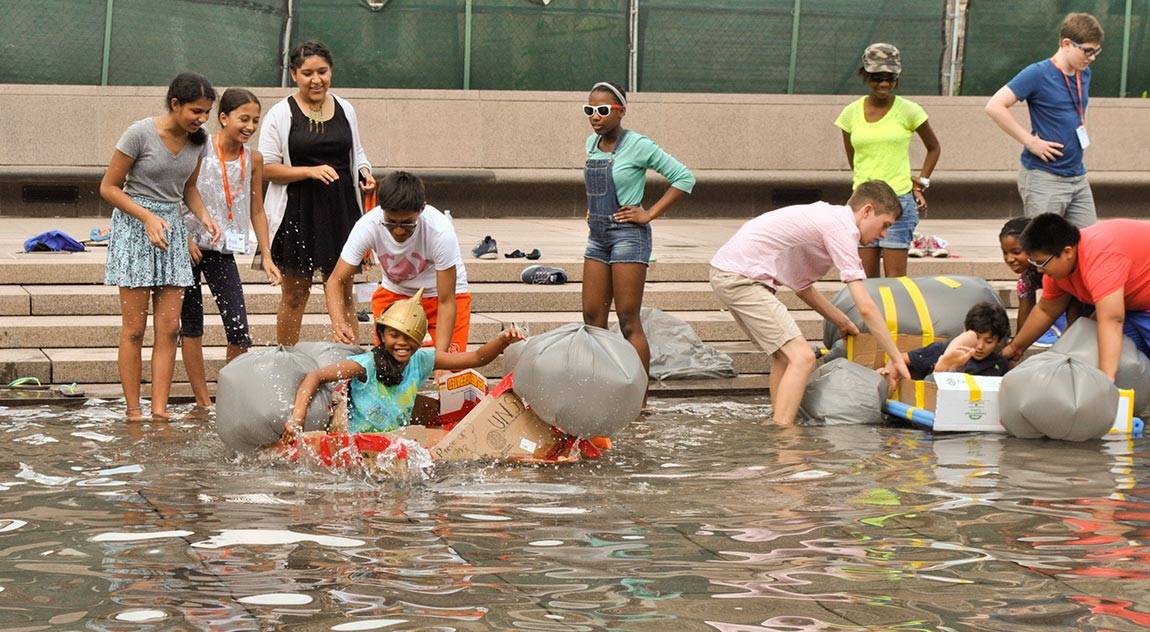 For a lesson on buoyancy, STEAM Camp students built canoes out of cardboard, tape and plastic bags, and raced them across the Scudder Plaza fountain. Community House has organized the camp for 11 years as part of its mission to close the achievement gap among minority and low-income children in the Princeton area. (Photo by Tatiana Evans, Class of 2018, for the Pace Center for Civic Engagement)

Mikyo Kalabacos, a 12-year-old student at Princeton Charter School, said his favorite day was when campers learned about buoyancy by building canoes.

"We had to make our own boats using only cardboard, tape and plastic bags," he said. "It had to carry one person across the fountain outside Robertson Hall and our team won!"

"The first morning most of them had never heard of centripetal force and weren't even sure how to pronounce it," said STEAM Camp associate Deana Hamlin, Class of 2017. "But by the time they got to Six Flags, they could all say in which part of a ride they had experienced the greatest centripetal force. Going to Six Flags wasn't just about riding roller coasters. They had learned something." 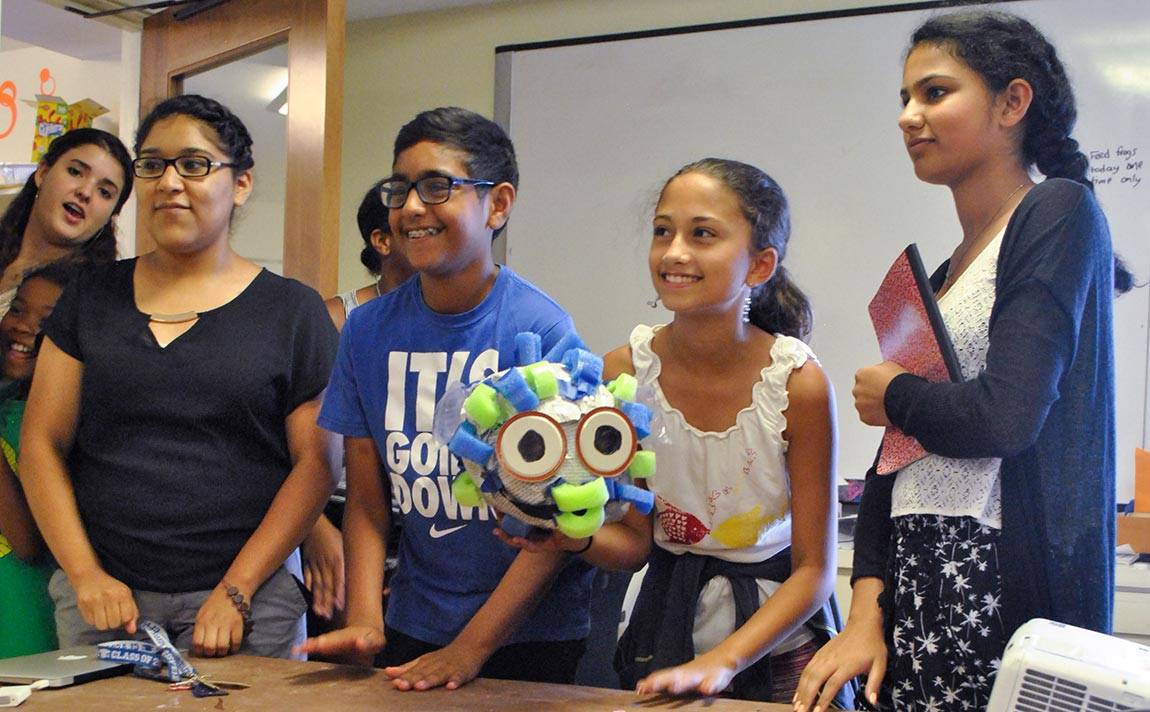 Arts were added this year to the camp's science-focused curriculum as a way to expose the students to different activities and ways of thinking. Students worked with the Office of Sustainability to turn recycled materials into art, such as Winston the Lionfish, made out of pool noodles, plastic bags, newspaper and can lids. (Photo by Tatiana Evans, Class of 2018, for the Pace Center for Civic Engagement)

For a lesson on solar energy, students cooked s'mores in small ovens fashioned from cardboard, tinfoil and plastic wrap. The marshmallow-and-chocolate treats became warm and gooey after a short time baking in the sun.

"This is way easier than building a campfire and uses less energy than melting them in the microwave," said 13-year-old Denzel Washington, who attends John Witherspoon Middle School. "I'm going to try this at home."

As part of this year's arts addition, students learned about re-using recycled materials during a "trash art" contest led by the Office of Sustainability, as well as filmed and edited videos chronicling their time at STEAM Camp with help from the Office of Communications.

"Most of us love roller coasters and engineering, so our group made a video about the marble roller coaster experiment," said Raina Williamson, 13, a student at John Witherspoon Middle School. "I've filmed a few things in iMovie before, but this is something I would be proud to put on YouTube."

The campers also got to sing, dance, juggle and perform comedy routines during the camp's first annual talent show.

"The addition of the arts component was a way to support our overall goal to help cultivate well-rounded young adults," Collins said. "We know that exposure to the arts is extremely beneficial for young adults, and provides them with creative ways to share something about who they are."

In addition to teaching science, the camp also fostered connections between the middle school students and University students.

"I really enjoy being around these kids and I also identify with them a lot. I'm a first-generation, low-income minority student at Princeton," said camp associate Maria Perales, Class of 2018. "It's great to not just be a teacher but a mentor to them." 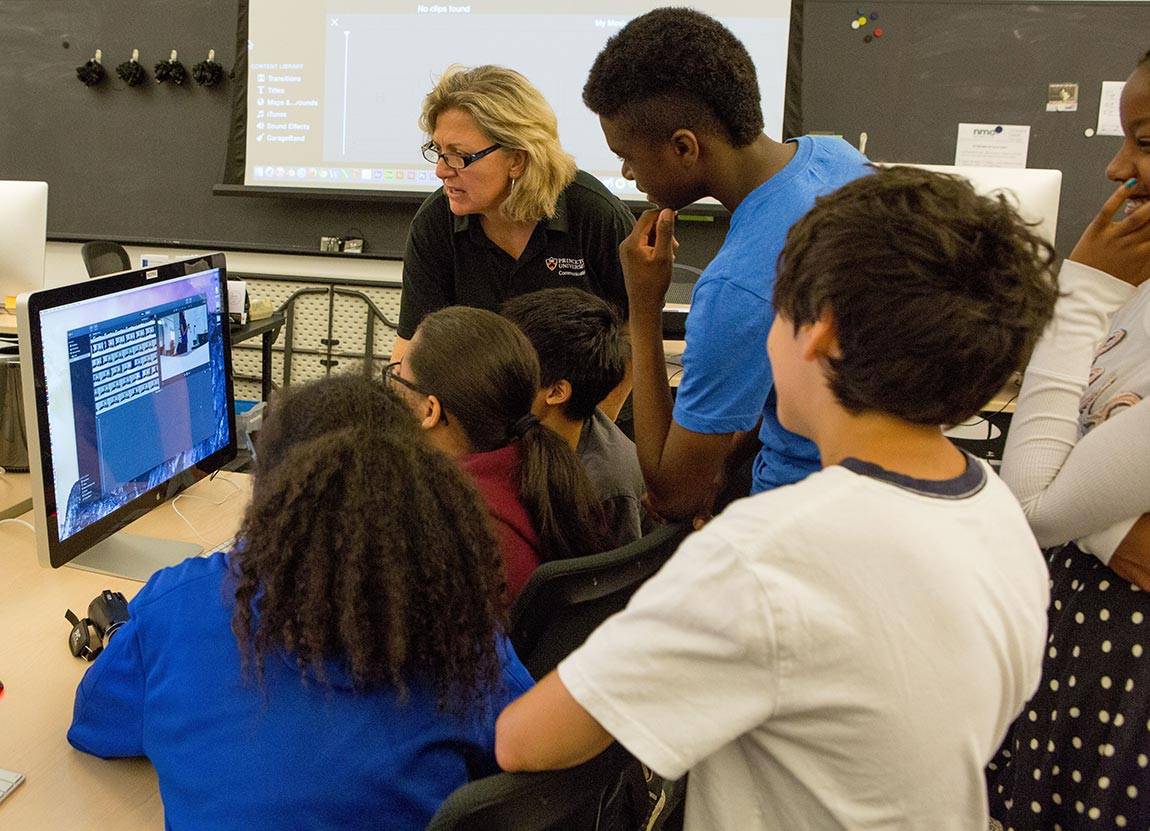 From DNA to drama: Exploring science and arts at Princeton STEAM Camp