Nearly 900 Princeton alumni and guests participated in the conference Thursday through Saturday, April 14-16, representing classes from 1949 to 2015 and 46 academic departments and programs. Alumni came from more than 25 states and from nations including Canada and Israel.

"It's a deep family connection and Princeton tradition," he said. "I'm proud and happy to be part of the Jewish community on campus, not just when I was here on campus, but to know that our family has long been involved." The Langers are among those featured in a video about Jewish life at Princeton shown at the conference Friday morning.

Over the last century, Jewish life at Princeton University has expanded from a few students to a thriving academic, religious and cultural community involving thousands of students and alumni today. (Video by Nick Barberio, Office of Communications)

Highlights of the conference included a conversation with President Christopher L. Eisgruber; a discussion with Princeton University Presidents Emeriti William G. Bowen, professor of economics andpublic affairs emeritus, and Harold T. Shapiro, professor of economics and public affairs; and a closing reception and dinner with remarks by Mark Wilf, a member of the Class of 1984 and owner and president of the Minnesota Vikings football team. 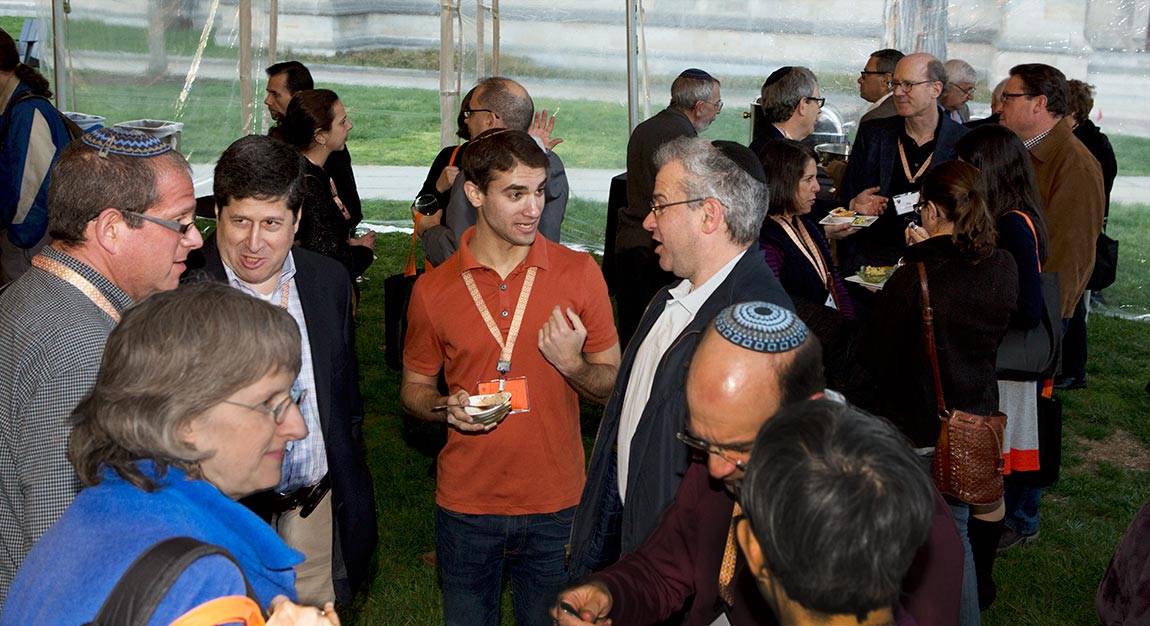 Nearly 900 Princeton University alumni and guests returned to campus Thursday through Saturday, April 14-16, for the "L'Chaim! To Life: Celebrating 100 Years of Jewish Life at Princeton" conference. Above, alumni enjoy lively conversation and reuniting with old friends and classmates at the welcome reception. (Photo by Denise Applewhite, Office of Communications)

At the welcome reception Thursday evening, as the springtime sun spread across Firestone Plaza and burnished the campus rooftops in an appropriately orange twilight, conference participants filled a large tent between McCosh Hall and the University Chapel with the sounds of laughter and lively conversation.

Donnica Moore, a member of the Class of 1981, chatted with her classmate Jessica Friedman, and said she was looking forward to seeing her son, Brian Bernard, a senior and member of the Footnotes, perform in "The Man Show" Thursday night, along with the Nassoons and the Tigertones.

"If you told me in 1977 that there was going to be a gathering of Jewish alumni at Princeton University 30 years later, I would have died laughing," Moore said. "Princeton at that time was not really welcoming to Jewish students; there was a tremendous amount of anti-Semitism. So this is a remarkable gathering. I come to all Princeton gatherings — I have orange and black blood — but this is very special in a different way," she said.

Abby Klionsky, a 2014 alumna, came to see friends from her class but also alumni whom she had interviewed for her senior thesis, "In the Tiger's Lair: The Development of Jewish Student Life at Princeton University, 1915-1972."

"Perhaps the most rewarding outcome of my research came at Reunions the year I graduated, when I reintroduced to each other two Jewish alumni — from the Classes of 1937 and 1939 — who had not seen each other in 75 years! They are now 101 and 99 years old, respectively, and I keep a framed photo of the three of us, in our class jackets, in my room," she said. 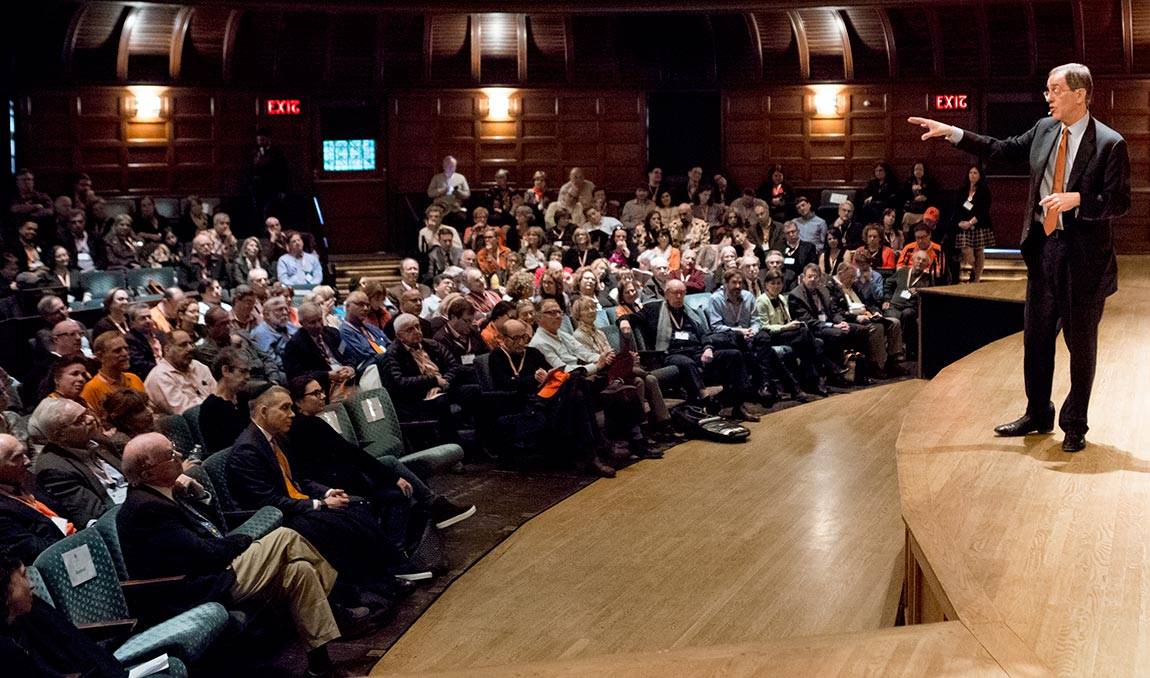 President Christopher L. Eisgruber speaks to conference participants at Richardson Auditorium, highlighting the themes of history and change running through the event. (Photo by Denise Applewhite, Office of Communications)

Eisgruber spoke to hundreds of participants — clad in orange and black from yarmulkes to shoes — Friday morning at Richardson Auditorium, highlighting themes of history and change running through the conference.

"We've had now a number of these conferences on this campus where we bring back alumni from groups the University has not always embraced in the way it should," he said, referencing past conferences for black, Asian American, and LGBT and ally alumni. "One of the things that is so powerful about those conferences is not just the story of what Princeton is today, but the story of change that has taken place over time at this University."

Eisgruber noted that the strategic planning framework adopted by the University's Board of Trustees this year emphasizes the role of the liberal arts university and the new opportunities and challenges created by technology.

He urged conference participants to find time to visit campus locations that reflect those priorities: the site where the the Lewis Center for the Arts is under construction; Firestone Library, where renovations are underway; the Engineering Quad and the newly opened Andlinger Center for Energy and the Environment; and the Frick Chemistry Laboratory.

Eisgruber also pointed to the framework's emphasis on the importance of making the world a better place.

"It's an extraordinary blessing to be on this campus as either a student or faculty member and I think one of the things we have to be thinking about all the time is how to make a difference in the world for the better," Eisgruber said.

Eisgruber also answered questions from the audience, sharing his response to learning of his own Jewish heritage and addressing the challenges faced by Jewish students on campus, the recent controversy over the legacy of Woodrow Wilson, concerns about anti-Semitism on campus, and whether students are insulating themselves from open discussion of difficult topics. 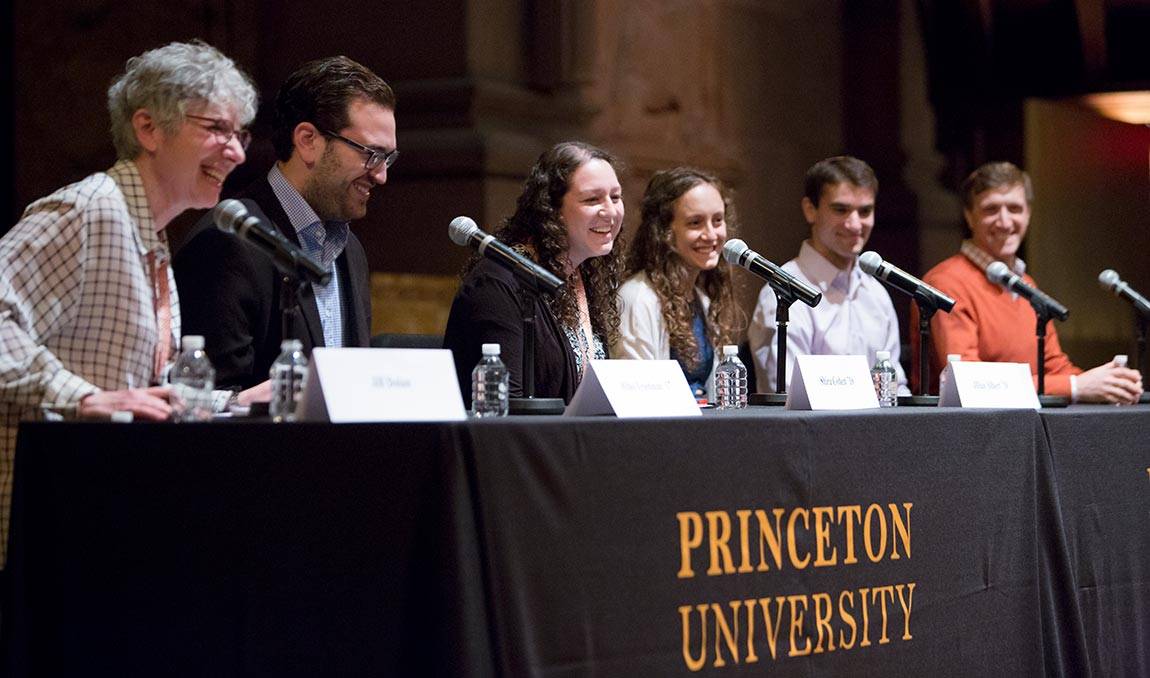 At the "The Student Experience" panel, Dean of the College Jill Dolan (from left), engages junior Hillel Friedman, senior Shira Cohen, sophomore Jillian Silbert, senior Samuel Major and graduate student Avi Wolf in a discussion about the many aspects of Jewish life at Princeton. (Photo by Denise Applewhite, Office of Communications)

At the Friday panel discussion "The Student Experience," which followed the conversation with Eisgruber, facilitator Jill Dolan, dean of the college, asked four undergraduates and a graduate student to describe the many aspects of Jewish life at Princeton.

The conversation ranged from the positive impact of pluralism on the Jewish community at Princeton to the welcoming environment and activities at the Center for Jewish Life to the larger intellectual and academic offerings through the Program in Judaic Studies.

When Dolan, who is also the Annan Professor in English and professor of theater in the Lewis Center for the Arts, asked the panel, "How well do you feel you're integrated into the mainstream of Princeton life outside of the diversity of the Jewish community?" senior Samuel Major shared an anecdote from his Outdoor Action (OA) trip during freshman orientation.

"I was nervous because I keep not only a strictly kosher diet but also I'm gluten-free. I'm a disaster," said Major, eliciting empathetic laughter from the audience. "Little did I know that my entire OA trip was not only kosher but gluten-free — because of me. That speaks to the extent to which Princeton bent over backwards to accommodate me and my Jewish identity and make sure I was comfortable, not only on campus but in the middle of the woods on the Appalachian Trail. I can't speak more highly about the way Princeton has worked to make sure that Jewish students are an integral part of the larger campus community." 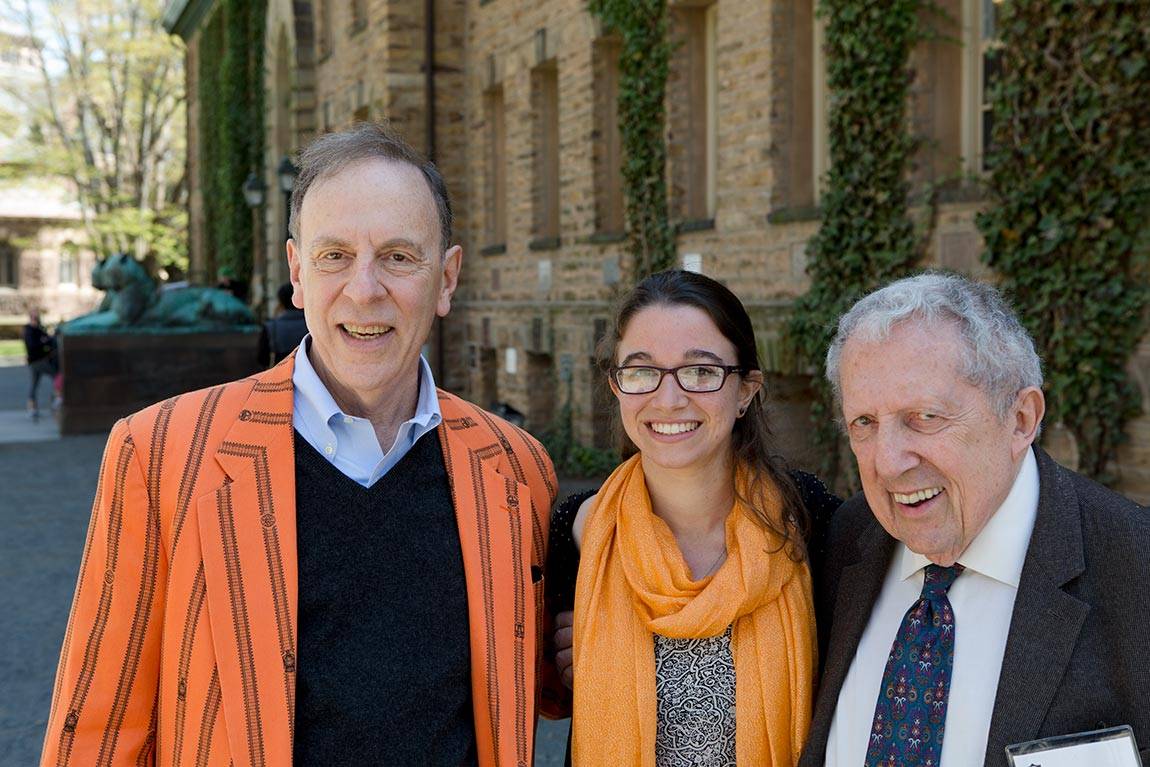 Abby Klionsky, a 2014 alumna (center), enjoys a "mini reunion" with Mark Biderman, a member of the Class of 1967 (left), and Emile Karafiol, a member of the Class of 1955, who were among the alumni Klionsky interviewed for her senior thesis, "In the Tiger's Lair: The Development of Jewish Student Life at Princeton University, 1915-1972." (Photo by Denise Applewhite, Office of Communications)

"Looking at Jews and general relativity, you end up touching on many aspects of not just the Jewish experience at Princeton but the development of key ideas in physics and many key world events, the First World War, the Second World War, nuclear weapons and various changes in our society," said Spergel, the Charles A. Young Professor of Astronomy on the Class of 1897 Foundation, professor of astrophysical sciences and chair of the Department of Astrophysical Sciences.

Spergel highlighted the work of a range of Jewish astronomers and physicists associated with the University from the 1930s to today — including Einstein, who was never on the faculty but had an office on campus, faculty members Martin Schwarzschild and John Wheeler, and Jacob Bekenstein, who received his Ph.D. from Princeton. 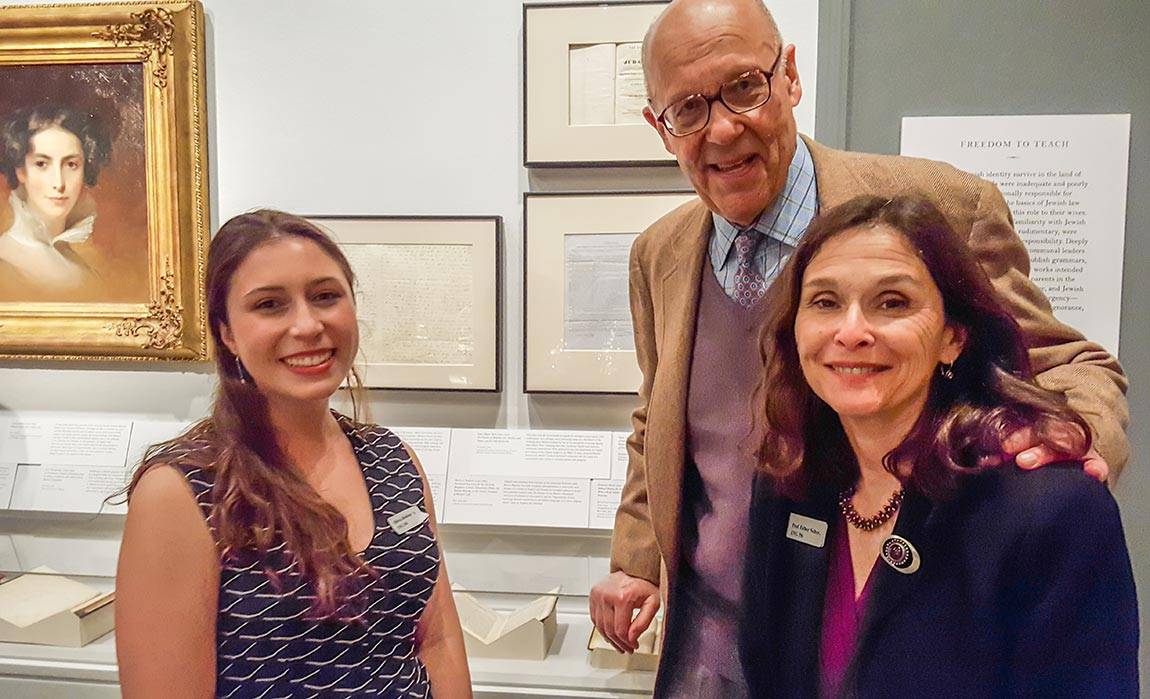 Student docents from the English course "American Jewish Writers," taught by Esther Schor, professor of English, discussed their research of items at the Princeton University Art Museum exhibition "By Dawn's Early Light: Jewish Contributions to American Culture from the Nation's Founding to the Civil War." Senior Olivia Robbins (left) shares her work with Schor (right) and Leonard Milberg, a member of the Class of 1953. (Photo by Jamie Saxon, Office of Communications)

Dozens of conference participants visited the Princeton University Art Museum to see the exhibition "By Dawn's Early Light: Jewish Contributions to American Culture from the Nation's Founding to the Civil War," which includes books, paintings, photographs and artifacts from the Princeton Library's Leonard L. Milberg '53 Collection of Jewish-American Writers as well as items from Milberg's personal collection and other museums. Watch this video to learn more about the exhibition.

On Saturday, students in the English course "American Jewish Writers," taught by Esther Schor, professor of English and the inaugural Behrman Professor in the Council of the Humanities, served as docents, each having chosen one object and researched it deeply.

Senior Olivia Robbins, an English major, discussed an 1852 techinot, a small book of prayers specifically for Jewish women, translated into English and compiled by a rabbi in New York City. "I have an interest in women's education," Robbins told several alumni gathered around her. "The final section, which I'm most interested in, are prayers that are said at various landmark moments in a woman's life — when she leaves her parents' house, when she gets pregnant, when she goes into labor, when she's at her son's circumcision. This genre still exists today. I think that this is a landmark text for American Jewish women because it's one of the first texts that acknowledges that they want to learn and they want to pray and they have a voice."

David Shrier, a 1980 alumnus, was impressed with Robbins' presentation and told her, "You're doing something more than hand in a paper; you actually put your mark on the world."

Shrier, who came with his wife, Helen Kapstein-Shrier, said the conference was put together "with a lot of thought and time and effort" and likened the weekend to "Reunions on steroids. At Reunions, we only see friends from our class," Shrier said, "but this weekend we're seeing many of our friends from different classes. It's a narrower focus but crosses more boundaries."

They'll be back next month to see their daughter Sarina graduate. 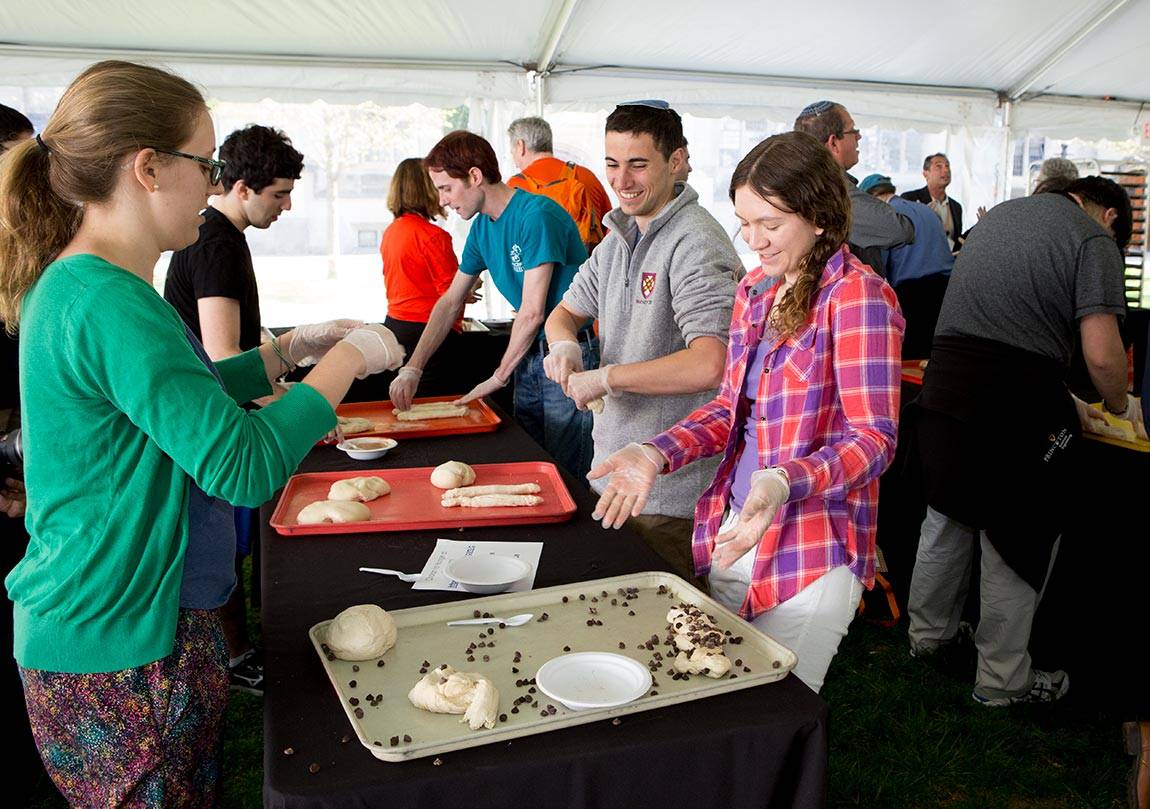 Conference participants join Princeton's Challah for Hunger chapter to prepare challah in McCosh Courtyard. The group, supported by the Center for Jewish Life, donates its proceeds from selling the bread to Mercer Street Friends Food Bank in New Jersey and the nonprofit organization Mazon: A Jewish Response to Hunger. (Photo by Denise Applewhite, Office of Communications)