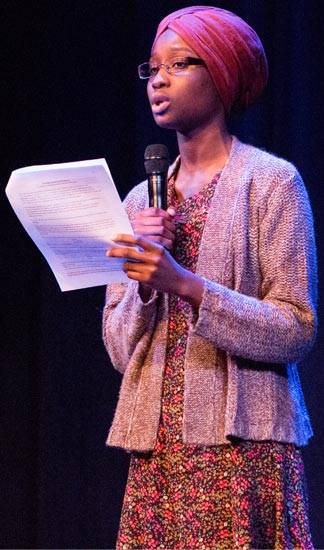 Frist Campus Center was the center of Princeton University's research universe the afternoon of Thursday, May 5, as more than 150 undergraduates, graduate students and postdoctoral researchers presented their work at the first Princeton Research Day.

The event highlighted research from the natural sciences, engineering, social sciences, humanities and the arts in formats including talks, poster presentations, performances, art exhibitions and digital presentations — all designed with the general public in mind.

"It's a wonderful cross-section of the research enterprise at Princeton," said Pablo Debenedetti, dean for research, the Class of 1950 Professor in Engineering and Applied Science and professor of chemical and biological engineering.

A taste of the day's diversity of research:

"I love research. I love presenting to the community about what I've been doing in classes and in the lab," said Jalisha Braxton, a senior majoring in psychology who gave a poster presentation on her research testing whether handwriting or typing results in better essays.

Freshman Elise Freeman, who was helping judge the poster presentations, said she enjoyed learning about research from a wide range of fields.

"I'm walking away very interested and engaged even though I'm not directly involved in the fields where the research is being done," said Freeman, who said she hopes to present her independent work at the event in future years.

Watch participants from across the Princeton campus prepare, present and reflect on the University's first Princeton Research Day. (Video by Nick Barberio, Office of Communications)

On the first level of Frist, students, faculty, staff and community members circulated around poster presentations, admired art installations and watched digital presentations. The second and third floors were the site of 90-second and 10-minute presentations, poster displays and performances. Impromptu presentations and question-and-answer sessions could be heard around every corner. 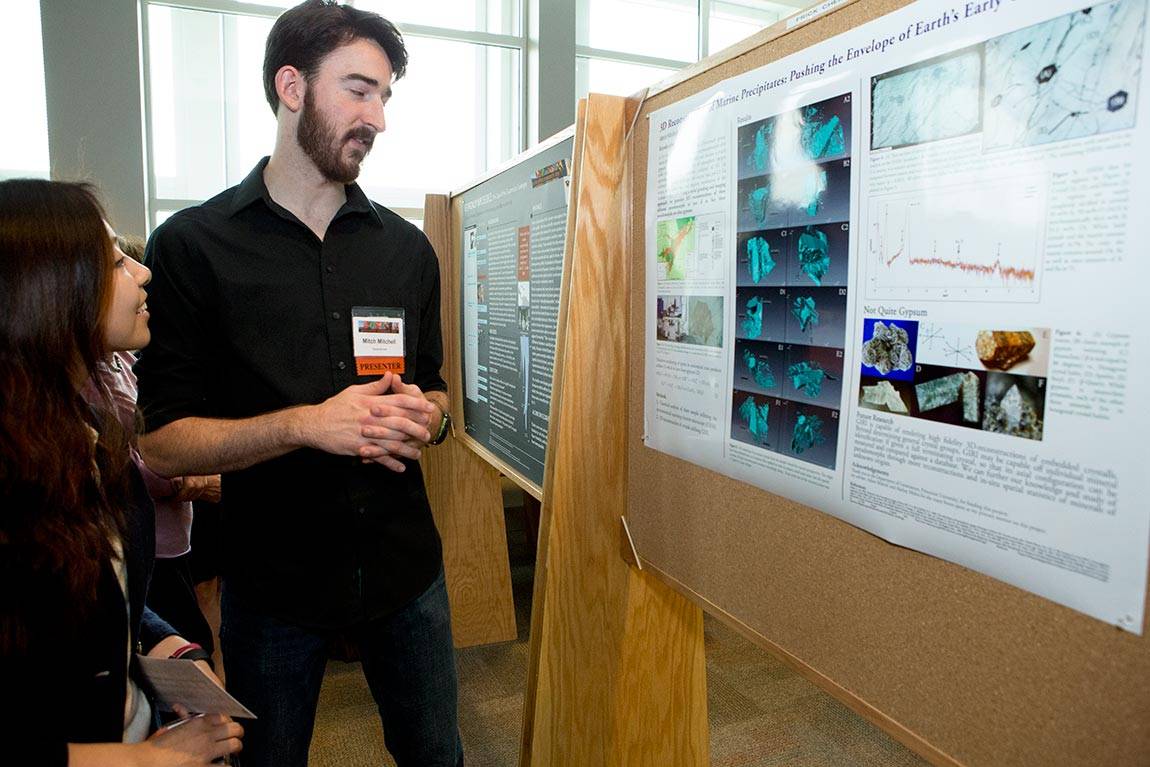 Julia Peiperl, a junior in the Department of English who is pursuing certificates in theater and music theater, shared sketches and costume designs she created for a February performance of Sophocles' tragedy "Elektra," which was set in the 1950s.

"There are lots of people in the arts and humanities here, which is really cool, because I don't think people realize how much research goes into costume design," Peiperl said. "I really like being able to show off all of the research and thought that went into the costumes."

Regardless of the type of research being conducted, postdoctoral researcher Grant Murphy said it is crucial to be able to convey it to the general public.

"All scientists are ambassadors to the general public," said Murphy, who presented his work on creating proteins with senior Matthew Volpe. "Science can be truly transformative and the more scientists are able to explain what they do, the better society will be able to understand and adopt new technologies and techniques." 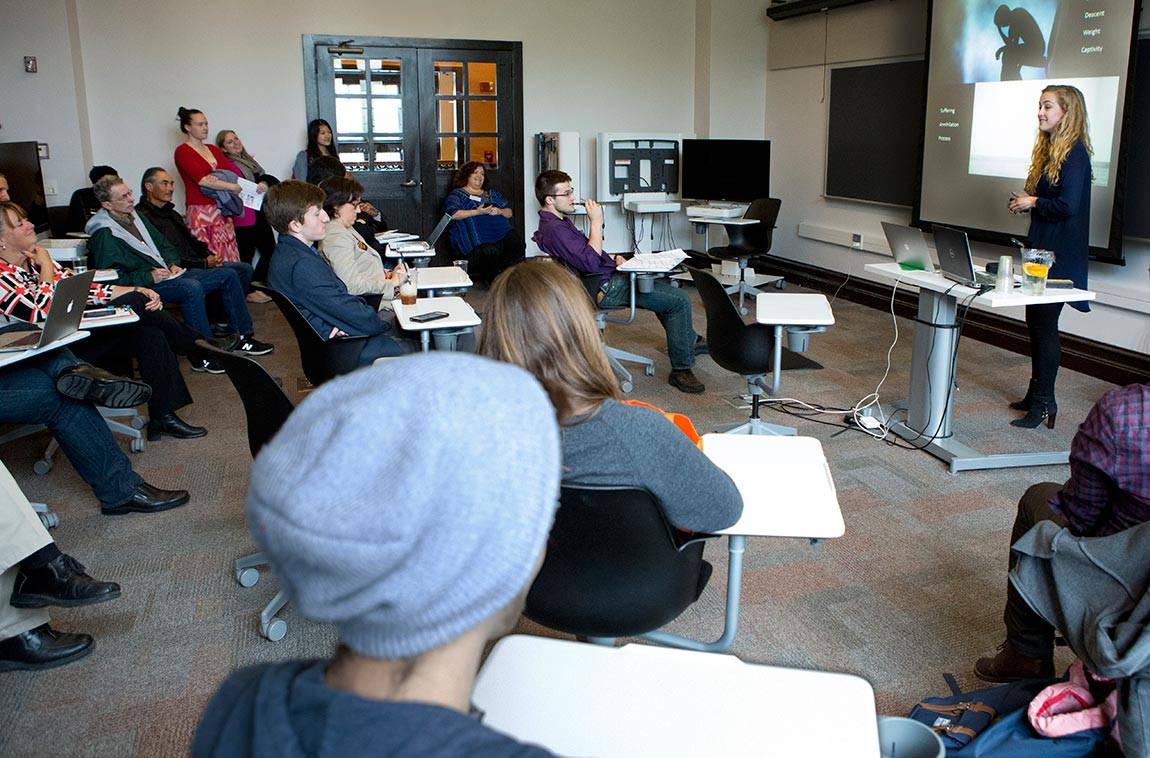 To help presenters be prepared to share their work with a broad audience, a wide range of workshops and one-on-one assistance were available in the weeks leading up to the event.

"The workshops were designed to help undergraduates, graduate students and postdocs communicate their stories more effectively, to share their research in a way that others not only grasp it but appreciate it. That is harder to do than it might seem," said John Weeren, director of the Princeton Writes program, who led a session on designing and delivering a captivating presentation. 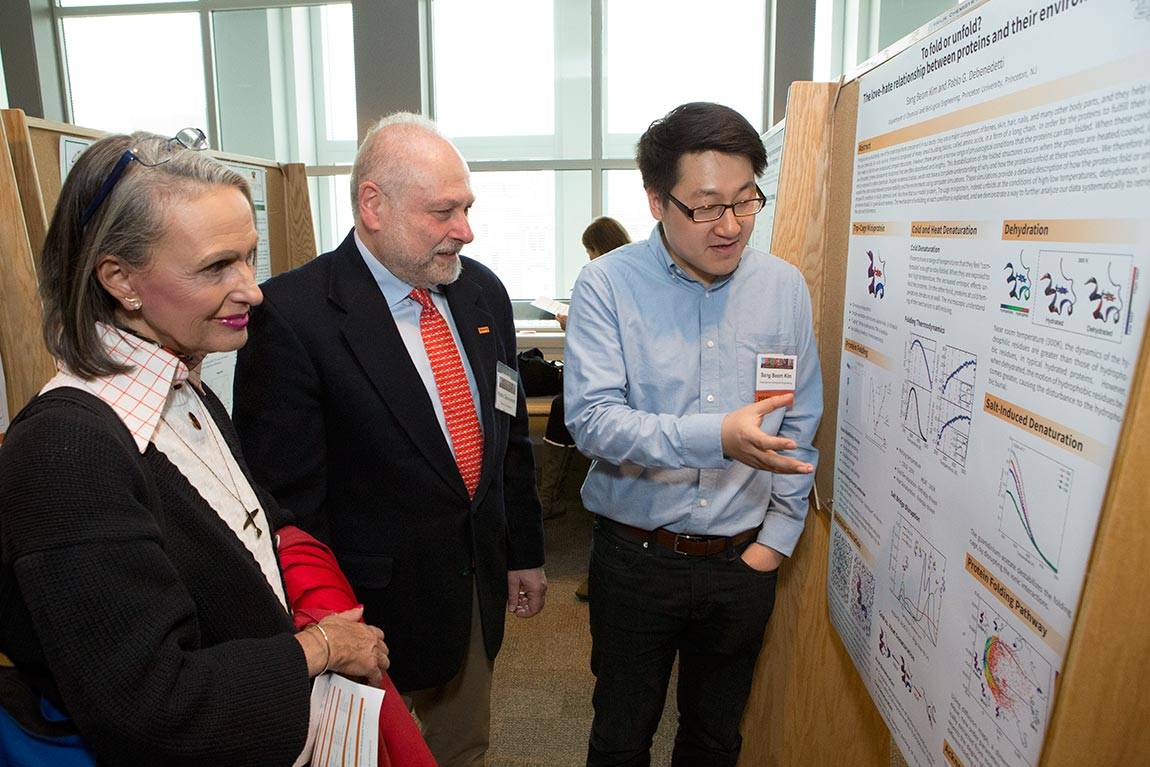 Princeton resident B.F. Graham (left) and Dean for Research Pablo Debenedetti (center) listen to graduate student Sang Beom Kim explain his research on the relationships between proteins and their environments.

In all, Princeton Research Day presented an important opportunity for undergraduates, said Jill Dolan, dean of the college, the Annan Professor in English and professor of theater in the Lewis Center for the Arts.

"Princeton is one of the very few universities, really, in the world where undergraduate students are encouraged to do the kind of original research that every single undergraduate on this campus does," she said. "So taking the opportunity at the end of the year to do a major public event in which students can present that work is groundbreaking." 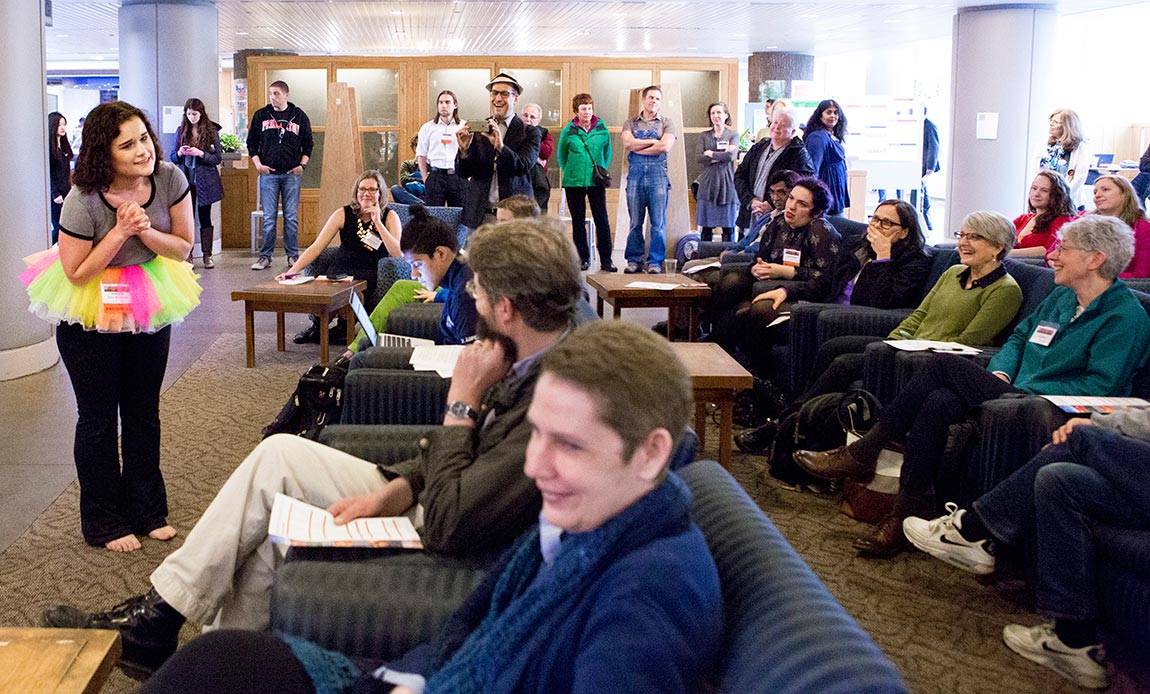 The event concluded with a reception for participants, judges and volunteers that included the announcement of awards selected both by judges and by votes of attendees.

Research Day was a collaborative initiative between the offices of the dean of the college, dean of the faculty, dean of the Graduate School and dean for research.

The organizers hope to hold the event again next year.

Princeton Research Day participants, judges and volunteers mingle at an awards reception that concluded the event.