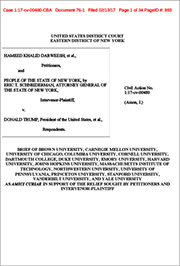 Princeton University and 16 other universities filed a friend-of-the-court brief Monday supporting a legal challenge to the Trump administration's Jan. 27 executive order on immigration.

The universities filed the amicus curiae brief in a civil action which the attorney general of New York and others are pursuing in the U.S. District Court for the Eastern District of New York.

The lawsuit challenges an executive order that President Donald Trump signed suspending most immigration from seven predominantly Muslim countries for 90 days, suspending refugee admission to the United States for 120 days and suspending the admission of Syrian refugees indefinitely.  For now, implementation of the order has been stayed by a federal court pending resolution of another case challenging it.

In the amicus brief, the universities cite their global missions and note that "each derives immeasurable benefit from the contributions of diverse students, faculty, and scholars from around the world."

"The contributions of these individuals redound to the benefit not only of the other members of amici’s campus communities, but also to the United States, and the world, more generally."

The brief adds that the “damaging effects” of the executive order “are significant and directly affect amici’s ability to pursue their missions. And they are being experienced absent any evidence that amici’s lawfully-present students, faculty, and scholars — all of whom have already undergone significant vetting by the government — pose any threat to the safety or security of the United States or amici’s campuses.”

The brief concludes by noting that the amici “take extremely seriously the safety and security of their campuses and of the nation: if amici’s campuses were not safe, or the towns and cities in which they are located were not secure, amici could not maintain their world-renowned learning environments.” They add, however, that they “believe that safety and security concerns can be addressed in a manner that is consistent with the values America has always stood for, including the free flow of ideas and people across borders and the welcoming of immigrants to our universities.”

They note that “‘the Government has not offered any evidence or even an explanation’ to justify the blanket ban on individuals from the specified countries.” For that reason and given “the significant burdens the Executive Order inflicts on amici’s students, faculty, and scholars, as well as the substantial impediments it poses to amici’s ability to fulfill their educational missions” they support the relief sought in the case, which includes a permanent injunction against enforcement of the executive order.

The brief cites a letter, initiated by Princeton President Christopher L. Eisgruber and the president of the University of Pennsylvania, that they and 46 other college and university presidents and chancellors sent to President Trump last week asking him to rectify or rescind the executive order. Eisgruber also issued a statement to the University community on the executive order two days after the order was issued.