Princeton University’s Khristina Gonzalez (left), associate dean of the college for programs of access and inclusion, and President Christopher L. Eisgruber meet with high school juniors at Making Waves Academy on May 3 as part of a day of events in the Bay Area focused on ways to improve college access and success for low-income and first-generation students.

SAN FRANCISCO — Stressing that college is a "difference maker" in people's lives, Princeton University President Christopher L. Eisgruber focused on ways to improve college access and success for low-income and first-generation students during a visit to the Bay Area on Wednesday, May 3. 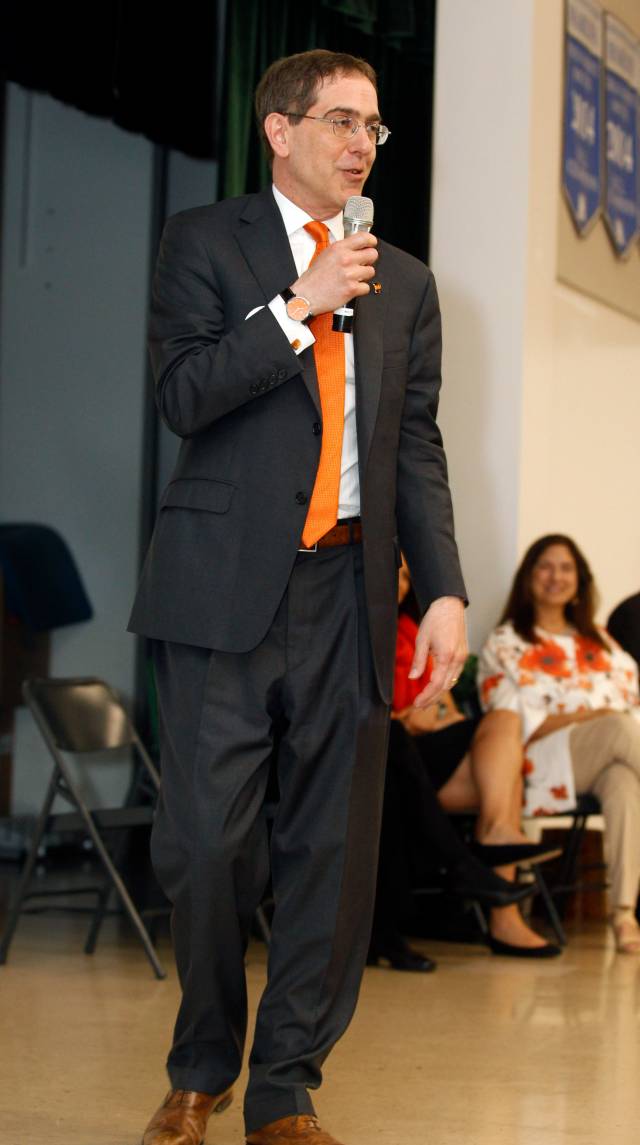 Eisgruber addresses an assembly of high school students at Making Waves, a public charter school founded by Princeton alumnus John Scully. "Going to college and getting that degree is a real difference maker," he said.

Eisgruber was joined by Princeton administrators, including Cecilia Rouse, dean of the Woodrow Wilson School of Public and International Affairs, and Khristina Gonzalez, associate dean of the college for programs of access and inclusion, for a tour of the Making Waves Academy charter school in Richmond, California. Eisgruber also led a roundtable discussion in San Francisco that included K-12 education officials, university faculty, researchers, nonprofit leaders and Princeton alumni.

Eisgruber told roundtable participants that he hopes to build on the progress Princeton has made in attracting and supporting low-income and first-generation students while also contributing to a broader national conversation about how educators can better serve these students.

"For me, getting greater socioeconomic diversity in higher education generally and at Princeton is one of the most important things we can do right now to make a difference in the world," he said. "I'm convinced that getting more college degrees for kids from low-income backgrounds is something of extraordinary importance to our country."

The day began at Making Waves, a public charter school that serves about 780 students in grades five through 12 in Richmond, a city of about 100,000 located 16 miles northeast of San Francisco. The school, which Princeton alumnus John Scully founded, serves mostly poor Latino students and focuses on providing the support needed to help them reach college and earn a degree with minimal student-loan debt.

Eisgruber, Rouse and Gonzalez toured classrooms at the school, observing a chemistry class, talking with students about their study of the book "Into the Wild" in a literature class and watching precalculus students at work.

At an assembly for high school students, Making Waves Chief Executive Alton Nelson Jr. welcomed the Princeton group and said the school was honored by the visit.

"Making Waves Academy is a very special community comprised of faculty, staff and leadership who care about our students," Nelson said. "Most important are the students and families who have chosen Making Waves Academy. They have shared with me that this is a place that will help them achieve their hopes and dreams for their futures. It is in that spirit we welcome our special visitors today."

Rouse told the students about the self-doubt she experienced during her own education and asked who in the room had at times felt they were the only one in their class who "didn't get it" — didn't understand an assignment or a concept. Nearly everyone — including Eisgruber — raised a hand.

"What I learned along the way was I had to keep working," Rouse said. "Almost everyone feels the same way sometimes."

Her advice: Don't be afraid to ask questions, reach out for support, and take care of yourself.

Gonzalez told the students they are needed in higher education. 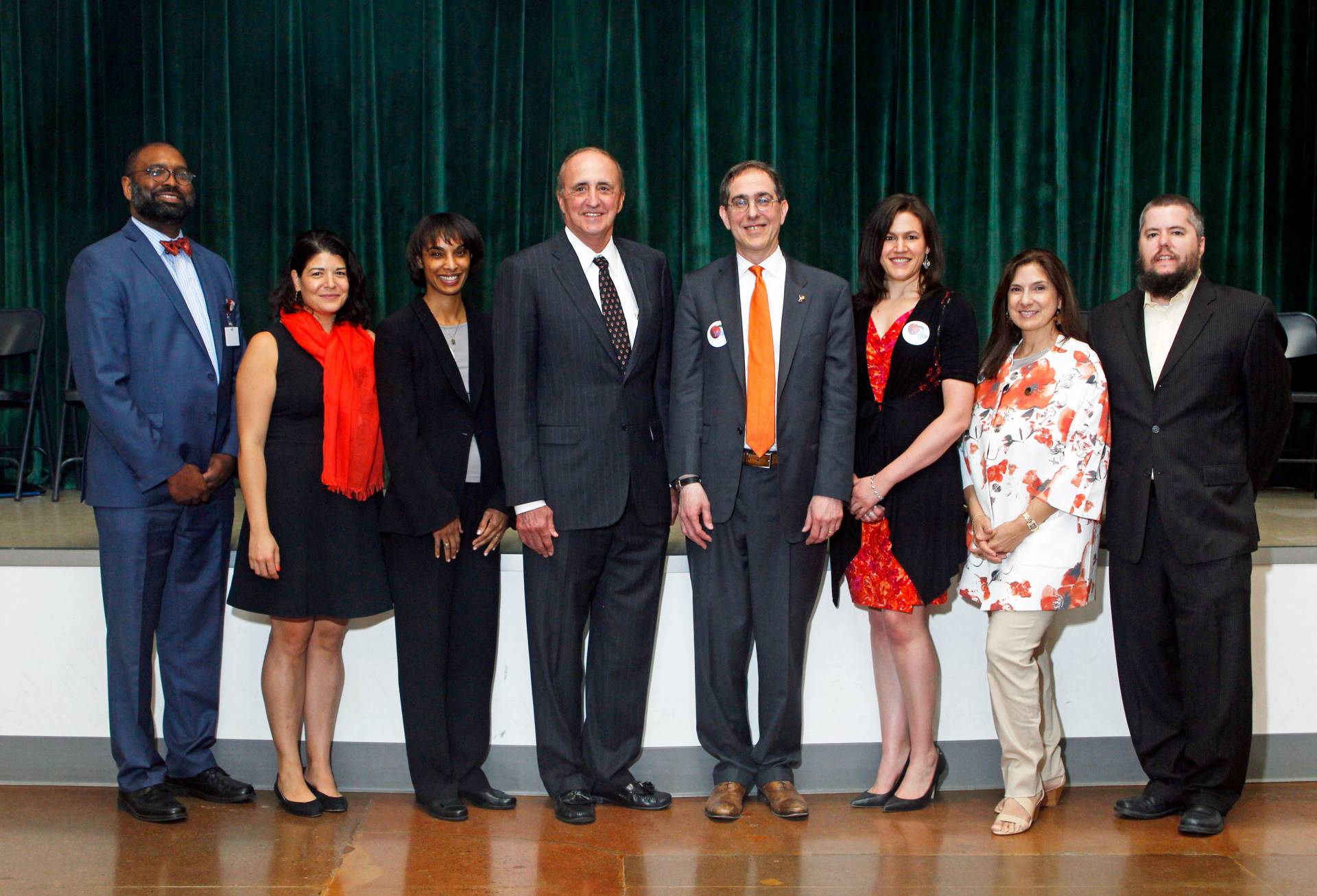 The afternoon roundtable at San Francisco's Fairmont Hotel focused on identifying promising strategies to attract, enroll, and graduate low-income and first-generation students and addressing the hurdles that stand in the way of their success. Over the course of the two-hour discussion, participants grappled with a range of issues that have critical implications for college access and success on campuses across the nation.

Along with the Princeton administrators, participants from higher education included John Etchemendy, provost emeritus at Stanford University; Ralph Hexter, interim chancellor at the University of California-Davis; Jesse Rothstein, a professor of public policy and labor economics at the University of California-Berkeley, and former Princeton faculty member; and Claude Steele, a professor of psychology at Berkeley. The roundtable also included senior administrators from the Oakland and San Francisco unified school districts; the heads of The Institute for College Access and Success and California Competes: Higher Education for a Strong Economy organizations; and University alumni who are leaders in the field of college access and success, including Scully and his wife, Regina.

Eisgruber noted successes at Princeton, including raising the percentage of students receiving federal Pell grants — a proxy for financial need — to 21 percent of the Class of 2020, up from 7 percent a little more than a decade ago. The University is also participating in the American Talent Initiative, which seeks to increase the enrollment of low-income students at 270 colleges and universities across the country, and Eisgruber is serving on its steering committee.

"One of the things that has been impressive to me as I have become more involved in this area and we have made progress on it is that there are strategies that can genuinely make a difference," Eisgruber said. "The talent is there, and with the right kind of information and persistence on our part as institutions, I really feel that we can move the needle even in a time when getting additional government funding for these kinds of things seems close to impossible in most venues."

The rapid increase in socioeconomic diversity at Princeton that has occurred in recent years required a multifaceted and vigorous approach involving many offices across campus. For example, the Office of Admission enhanced its outreach to low-income, first-generation prospective students, seeking to answer questions such as whether the students would feel comfortable on campus and could afford to attend. Admissions officers also began looking at applications differently, recognizing that some students must work during high school, limiting their opportunities for outside activities.

He added that the University has invested more heavily in programs that seek to increase the pipeline of talented low-income students attending college, such as the Leadership Enterprise for a Diverse America (LEDA) program that brings 100 rising high school seniors to the Princeton campus each summer. Additionally, Princeton has enhanced its programs to support students from low-income backgrounds on campus, including the Freshman Scholars Institute, an eight-week summer program for incoming first-year students, and the Scholars Institute Fellows Program, which offers support throughout students' Princeton careers. Gonzalez leads both programs. 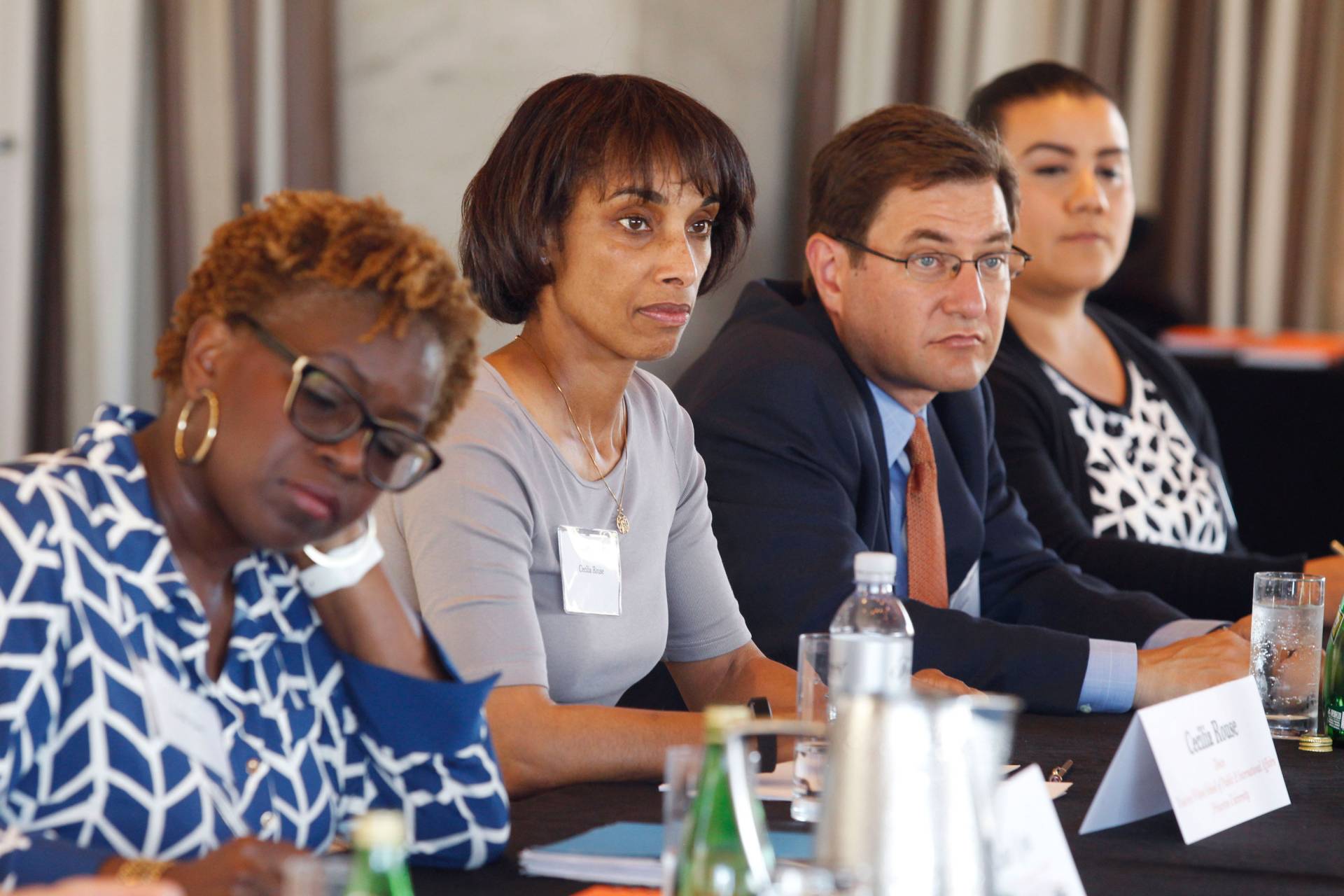 The afternoon roundtable discussion focused on identifying promising strategies to attract, enroll, and graduate low-income and first-generation students and addressing the hurdles that stand in the way of their success. The participants included (from left) Lande Ajose, executive director of California Competes and senior vice president of The Opportunity Institute; Rouse; Jesse Rothstein, professor of public policy and economics at the University of California, Berkeley; and Tatiana Sanchez, a reporter who covers race and demographics for the Bay Area News Group.

"As a country, education is one of the foundations for economic growth, and right now we're facing the twin challenges of increasing income inequality and anemic economic growth," she said.

Steele, whose book "Whistling Vivaldi: How Stereotypes Affect Us and What We Can Do" Eisgruber selected for the "Pre-read" for incoming Princeton students in 2015, said that large public universities must play a big role in addressing the needs of low-income students if progress is to be made on a national level.

Institutions such as Princeton and its peers can help, he noted, by providing leadership and striving to broaden the impact of successful initiatives beyond the University's campus. For example, he said Princeton could contribute to national conversations about the role for faculty in supporting students from low-income backgrounds and deepen the knowledge base about attrition rates that are often seen among low-income students in science, technology, engineering and mathematics (STEM) fields. Steele said another problem is the reliance on the SAT test to identify promising students, noting the poor power of the test to predict success in college and the advantages wealthier students have in preparing for the test.

Eisgruber said he expects to convene additional roundtables on the topic in the future. In concluding the discussion, he said he hopes that progress can continue even in the face of enormous challenges, such as the absence of greater public funding for universities.

"The challenges are huge, but the differences we can make are really considerable," he said.