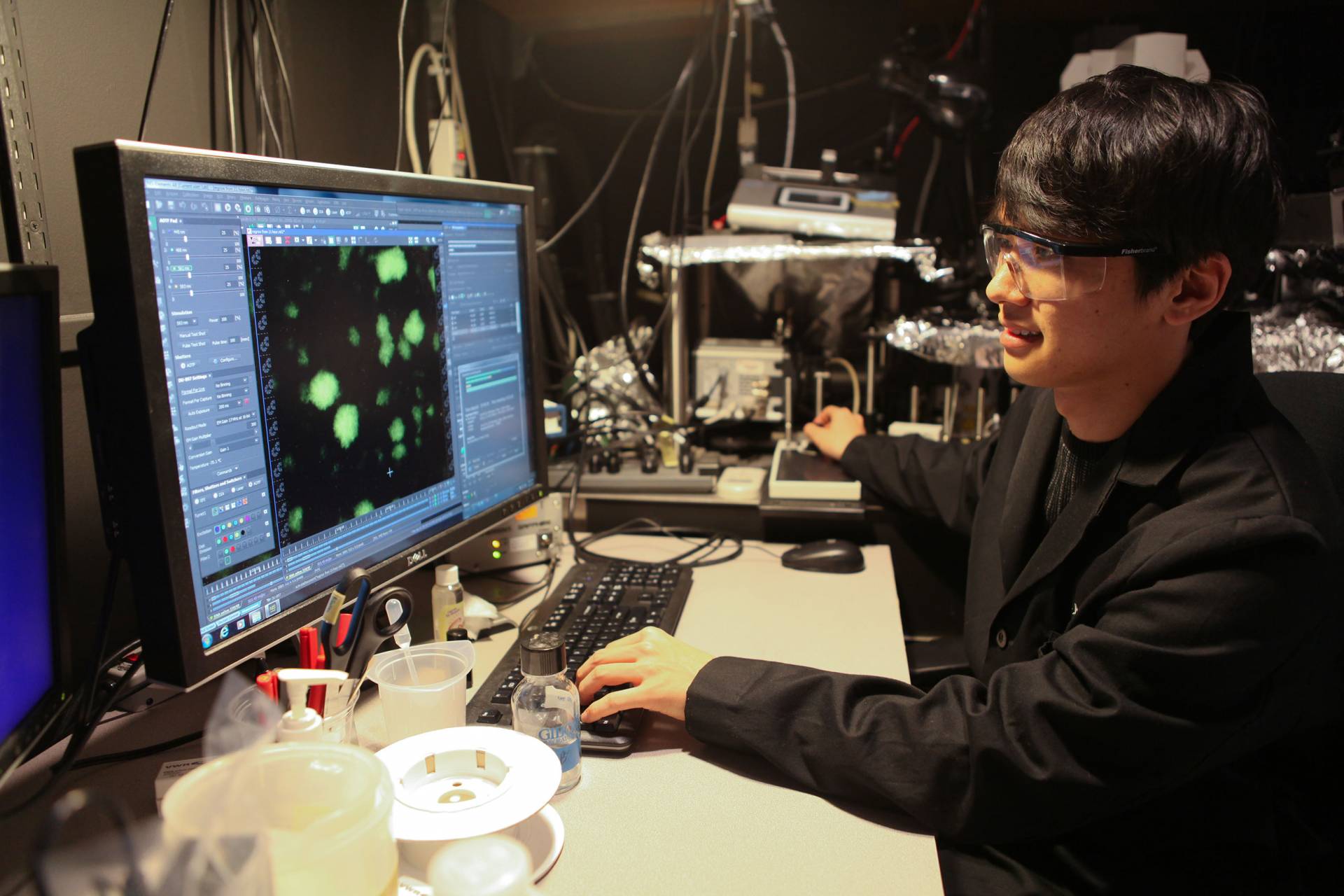 An interdisciplinary team of Princeton biologists, chemists and engineers developed chemical coatings that can promote or inhibit bacterial activity. The coatings work by manipulating a type of bacterial communication called quorum sensing, in which bacteria signal each other when their colony achieves a certain level of growth. Above, graduate student Minyoung Kevin Kim, who works jointly in engineering and biology labs, observes bacteria, programmed to glow green, through a microscope.

Princeton researchers have developed a way to place onto surfaces special coatings that chemically "communicate" with bacteria, telling them what to do. The coatings, which could be useful in inhibiting or promoting bacterial growth as needed, possess this controlling power over bacteria because, in effect, they "speak" the bugs' own language.

The new technology, reported May 22 in Nature Microbiology, contains the very same sorts of biomolecules that microbes release naturally for communicating and coordinating group behavior — a process called quorum sensing.

Hijacking this bacterial language of quorum sensing could open a range of applications, the researchers said. Coating surfaces in hospitals could combat the formation of fortress-like communities of bacteria called biofilms, thereby leaving the germs vulnerable to antibiotics in humans or to disinfectant cleaning products on hospital surfaces or equipment. Alternatively, if the bacteria deliver benefits — as in wastewater treatment plants or in probiotic production — then coating the surfaces of industrial equipment could boost the microbes' helpful activities.

"Our research raises the exciting, and now plausible possibility that surfaces decorated with quorum sensing-modulating molecules could have anti-infective or pro-growth properties," said co-lead author Minyoung Kevin Kim, a graduate student in the labs of molecular biology professor Bonnie Bassler and engineering professor Howard Stone, both senior authors of the paper.

"While we still have a lot of research left to do, identifying a quorum-sensing molecule that we can tether to a surface, as we have done in this study, could be an ideal strategy for dispersing biofilms," said Aishan Zhao, co-lead author of the paper and a graduate student in the lab of Tom Muir, also an author of the paper and the Van Zandt Williams Jr. Class of  1965 Professor of Chemistry.

Kim and Zhao conducted their experiments on a bacterium called Staphylococcus aureus. Often simply referred to as staph, it is a scourge of hospital wards, where it can linger and infect patients, especially those who receive implanted medical devices. In addition to causing potentially fatal conditions such as bacteraemia (blood poisoning) and toxic shock syndrome, staph is commonly resistant to antibiotics, putting it high on the list of pathogens that doctors desperately want better methods of fighting.

Researchers had previously shown that the quorum sensing in staph is driven by the secretion of a molecule dubbed AIP. The AIP molecule binds to receptors on the membranes of neighboring staph cells in a colony. If that colony is hunkered down in its self-protective biofilm state, the AIP accumulation triggers biofilm disassembly, or it prevents biofilm formation in the first place. If natural quorum sensing is allowed to proceed further, it leads to the bacteria entering a virulent state, where they reproduce rapidly and squirt out toxins that make people sick. A synthetic derivative of AIP, called TrAIP-II, shuts down the virulence, even forcing the bacteria back into a biofilm state.

To try to positively and negatively manipulate the staph's quorum sensing, the Princeton team set about creating surfaces studded with either AIP or TrAIP-II, chemicals previously developed in the Muir lab. Robustly attaching the molecules posed a major challenge, however. In overcoming it, Kim and Zhao lit upon the idea of using click chemistry, a technique they had first learned about together as students in a class taught by Muir a few years ago. Click chemistry efficiently links particular small-molecule units to construct a bigger whole. The technique successfully bridged the quorum-sensing molecules to "linker" molecules attached to surfaces including glass, plastic and metal.

The researchers further subjected the bacteria-controlling coatings to the sorts of stresses they would encounter in real-world environments. The coatings still worked in the presence of plasma from human blood, which would be encountered by implanted medical devices. When flushed by flowing water and air bubbles, as if lining industrial pipes, the biomolecules remained attached and functional. The chemical coatings on surfaces also proved long-lasting, with no diminishment in their intensity of pro- or anti-quorum sensing responses after more than five weeks of storage.

Overall, the prospect of selectively ratcheting up or tamping down bacterial chatter as a means of managing microbes has come much closer to actual practice.

"One can now imagine surfaces coated with these or other quorum-sensing molecules or derivatives for use in medicine, industry or agriculture that are resistant to colonization by harmful bacteria or promote colonization by beneficial bacteria," said Bassler, the Squibb Professor of Molecular Biology and department chair, as well as a Howard Hughes Medical Institute Investigator.

"We believe this surface-focused approach can be impactful," said Stone, the Donald R. Dixon '69 and Elizabeth W. Dixon Professor of Mechanical and Aerospace Engineering and department chair. "We hope to continue the research and work with potential partners who might have applications that would benefit from the approach we are developing at Princeton."

Additional authors on the paper include former Muir lab member Ashley Wang, Class of 2016, and Zachary Brown, currently part of the Muir lab as an associate research scholar. The work was supported by the National Science Foundation, the Howard Hughes Medical Institute, the National Institutes of Health, an STX fellowship, and Princeton's Eric and Wendy Schmidt Transformative Technology Fund.