By 2050, the projected 9 billion people on the planet will all need one thing — food. And providing that food will be one of the greatest generational challenges facing today's Princeton University students.

The new Princeton course “Agriculture, Human Diets and the Environment,” which debuted in spring 2018, sought to prepare students for a future where society will have to secure more nourishment on a planet running increasingly short on the land and resources needed to provide it. The class is an environmental studies course cross-listed with ecology and evolutionary biology.

By delving into the history of how humans have fed themselves — from hunter-gatherers to modern industrial agriculture — the course pushed students to explore the various environmental, social and nutritional repercussions of how society feeds itself now and in the future, said instructor Daniel Rubenstein, the Class of 1877 Professor of Zoology, professor of ecology and evolutionary biology, and director of the Program in Environmental Studies based in the Princeton Environmental Institute.

"Princeton students because of their passion, their intelligence, their ability to be articulate and explain their reasoning can be champions of a new future," Rubenstein said. "My goal in this course is to provide scientific evidence that will allow students to make wise decisions for the benefit of biodiversity, their health and the livelihoods of all peoples on the planet."

The stories, photos and videos below document various aspects of this unique course. Rubenstein organized the course into 12 lectures that explored a different aspect of human diet, food science, and agricultural history and techniques. Rubenstein coordinated with Smitha Haneef, assistant vice president for Campus Dining, to develop "culinary labs" that explored the foods and preparation methods related to the weekly lecture. Every week, students participated in town hall-style meetings with guest speakers with experience in the day's theme. Finally, students worked in groups on projects that tackled a specific issue related to food production, ethics and nutrition and were presented as a "final feast."

"There was a rich and complex dynamic of information in this class that for me was much more fascinating than exploring one isolated subject," said Ming Wilson, a music major who graduated from Princeton in June. "This class brought some despair, but ultimately hope. The general humanities principle I've learned is that the way we treat ourselves and the way we treat the food we eat are probably equivalent."

In the classroom: Studying the past to face the future 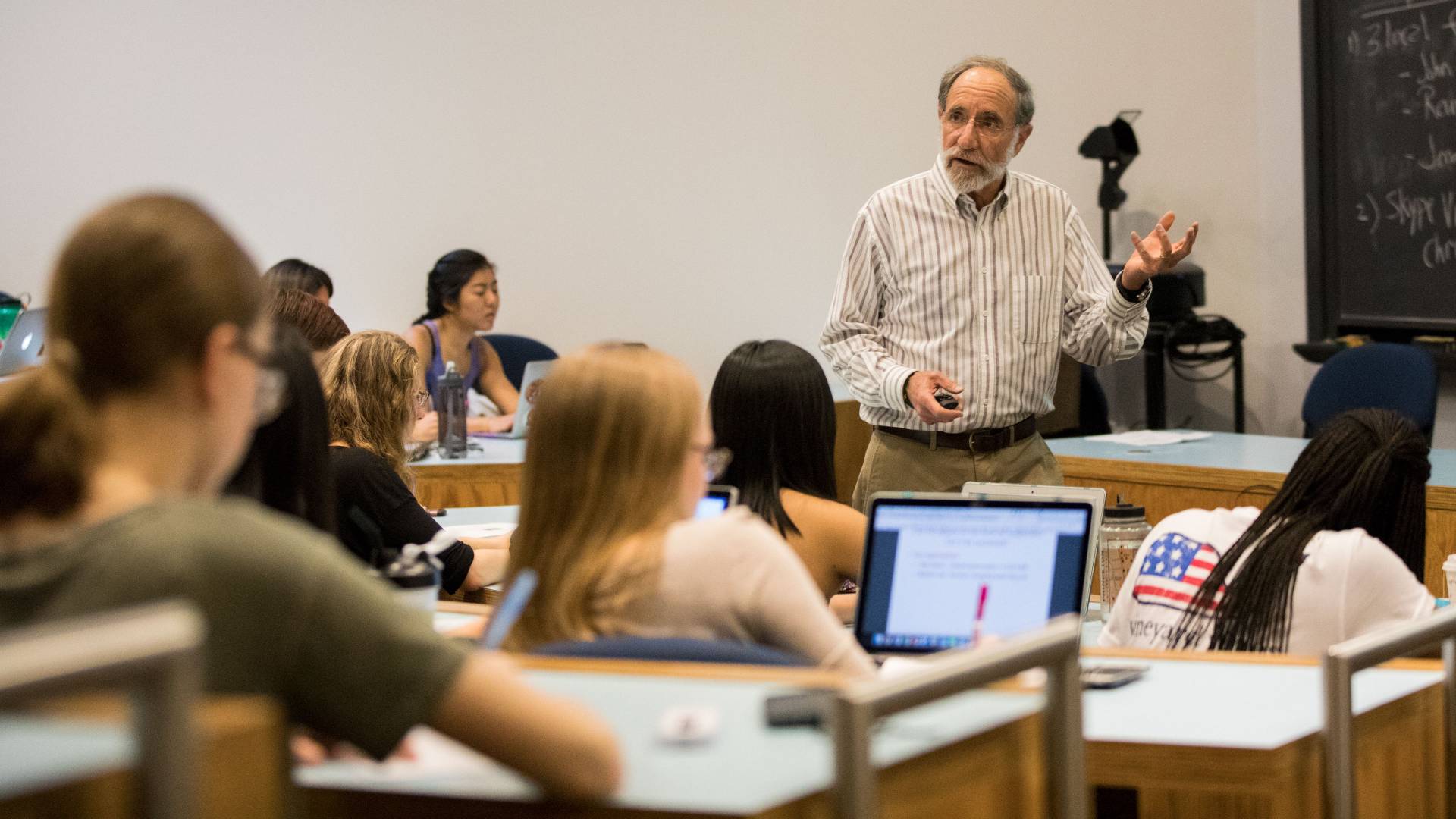 Rubenstein (standing) lectured each week on topics including the origins of agriculture, industrial food production, the overexploitation of land and oceans, and the farms of the future. “Understanding the past of food production is going to influence decisions going forward,” Rubenstein said. “We as teachers never know what will transform students and transformed students will start to act, and if they act they will also lead. And that will lead to change.” Rising senior William Conte said that the breadth of the lectures and discussions were necessary to capture the environmental and humanitarian urgency of rethinking how humans produce food. “Hugely relevant to any environmental discussion is talking about the future and the past of agriculture,” Conte said. “I learned in this class that there is a need to re-conceptualize the relationship between humans and our food processes and food systems. You need a foundational understanding of the past to understand how we’ve come to where we are today.”

The world in 2050: Preparing students to be food leaders 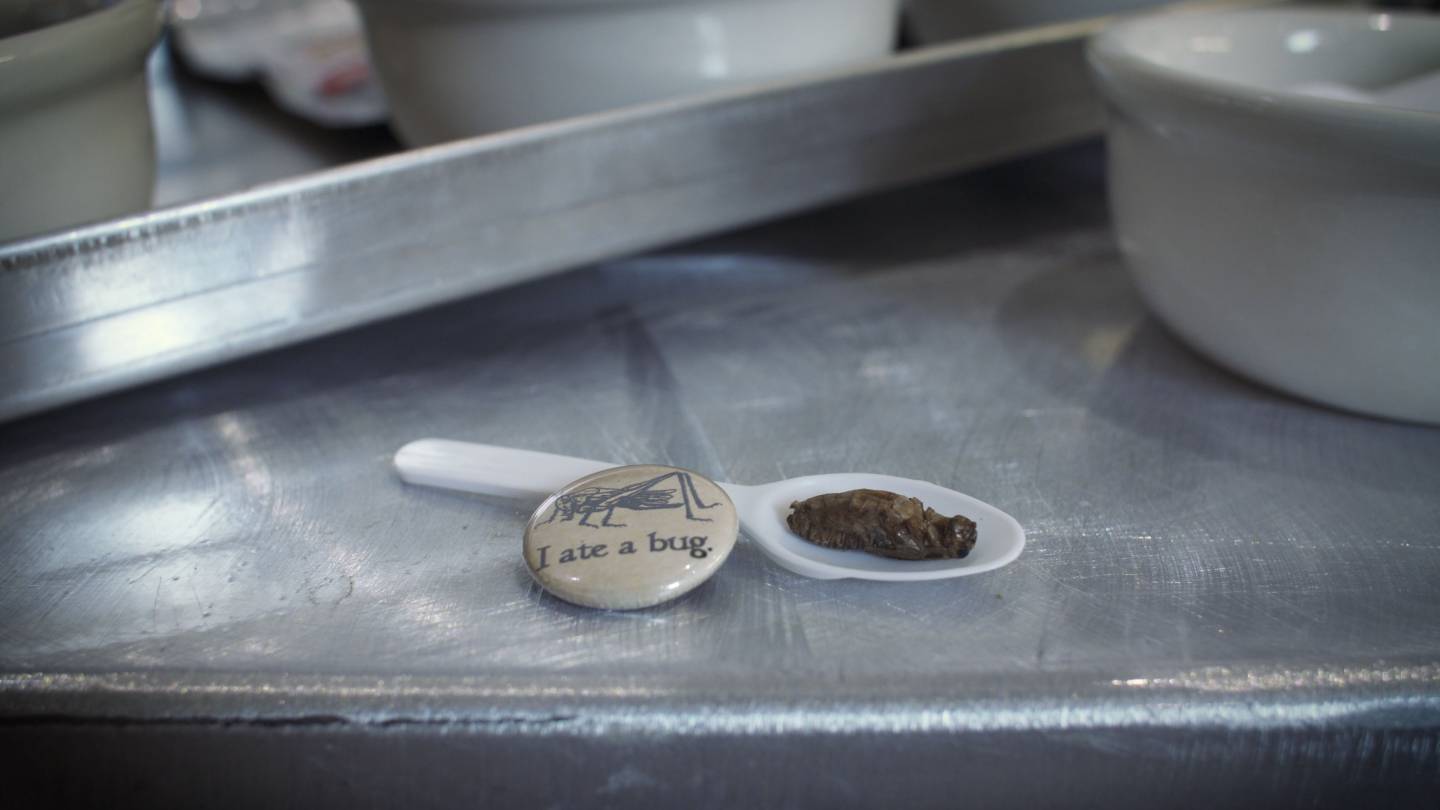 This video features the preparation for the March 5 culinary lab on the food of 2050. Resource-intensive protein sources such as cows are replaced with crickets and the plant-based Impossible Burger. Rubenstein focused the class on the year 2050 because it allowed students to consider the uncertain future of food production from the perspective of the deciding generation. “It’s far enough away that we don’t know what the world is going to look like, but near enough to be believable,” he said. “These students will probably have the highest buying power, and they’ll probably be the most secure in their jobs. So, it’s a good time to ask them, when you’re secure, what impact are you going to have on the world.”

The culinary labs featured at the middle of every class brought "theory and practice to life," Haneef said. "The course was designed in such a way that it would take students on a journey from the time human civilization came to be to now, then look a little bit into the future of food in the next 50 to 100 years," she said. Rubenstein collaborated with Haneef and Campus Dining chefs for nearly a year to create food menus that exhibited specific themes. "Food systems by design have several actors and unless everybody on the team pitches in, it wouldn't come alive," Haneef said. "Culinary labs are no different. It's a convergence of a lot of thought processes."

On Feb. 5, the first culinary lab (shown in the slideshow above) featured preserved vegetables, fruits and meats as a tie-in to the class lecture on the transition from hunter-gatherer to agrarian societies. "The question I raised in class was, how would you store food if it was a bonanza? If someone gathers 100 pounds of nuts or fruit, how do you store those so that you have the buffer when times get bad?" Rubenstein said. "The culinary lab provided all these options and really let students see the diversity of ways in which food can be preserved."

The culinary lab for the Feb. 12 class on society's move from subsistence to industrial agriculture contrasted ancient grains with cooked and fortified cereals (shown in the slideshow above). The lesson focused on how diets and food quality have changed with food production, Rubenstein said. "As we mechanized and moved into farming, we started producing lots of calories," he said. "Hunger goes down for more people, but nutrition changes. Cereal grains are often not very rich in terms of protein."

Long-time vegan Sophie Troyka, a junior majoring in the Woodrow Wilson School of Public and International Affairs, said that the class' exploration of nutrition challenged her perception of diet as solely an ethical decision. "Really this impacted me nutritionally. Because my dietary choices are for ethical reasons, I never really thought that much about the nutritional side," Troyka said. "It was really interesting learning about plant versus animal protein and how much protein we're supposed to have in our diets, because mine's really lacking in protein. Since then, I've been trying to eat fewer carbs and more protein."

Back to the land 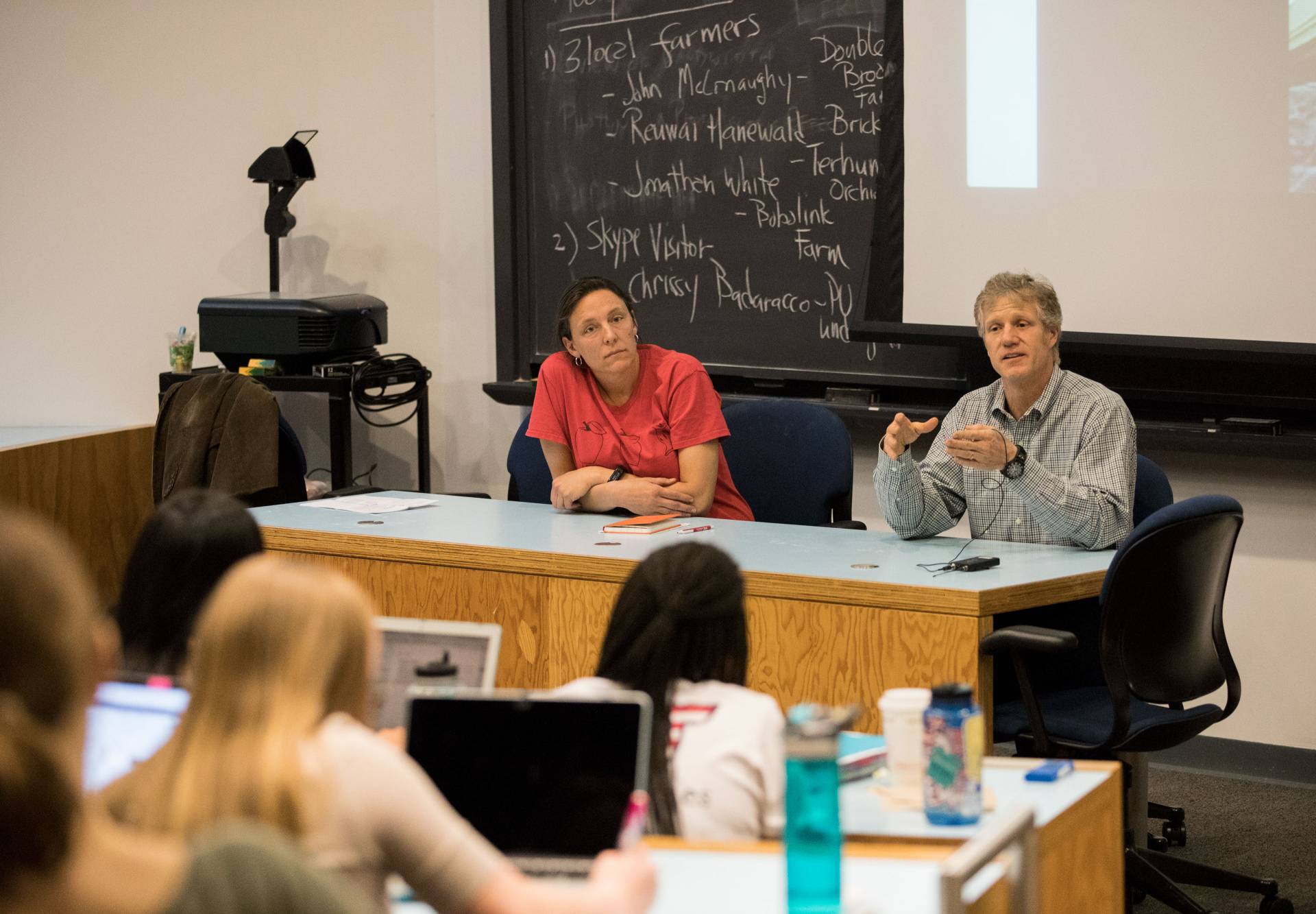 As it has for millennia, farming will be humankind’s source for a plentiful steady food source in the future. At the same time, the planet is more vulnerable to agriculture, which is the top emitter of greenhouse gases and a key driver in the destruction of ecosystems and biodiversity. “Stewardship becomes a big part of where and how preservation happens,” Jon McConaughy (right), who owns Double Brook Farm in Hopewell, New Jersey, told the class during the April 23 session on the future of farming. “Industrial agriculture and most agriculture until recently was a form of resource extraction,” he said. “Famers were more concerned with growing things than replenishing the soil.” Reuwai Hanewald (left), an 11th-generation farmer at Terhune Orchards in Princeton and a 1994 Princeton graduate, said that an important part of her work is visiting other farms and attending conferences to better navigate the painstaking balance between stewardship and survival that defines local farming. “It’s important to understand that this is a very complicated system,” she said. “That practice of sharing is how we continue growing. There are a lot of innovative farmers and a lot of farmers who love to learn.” The course engages with local farmers by using techniques and data to support class and summer-intern research, then applies that research back to the fields, Rubenstein said. 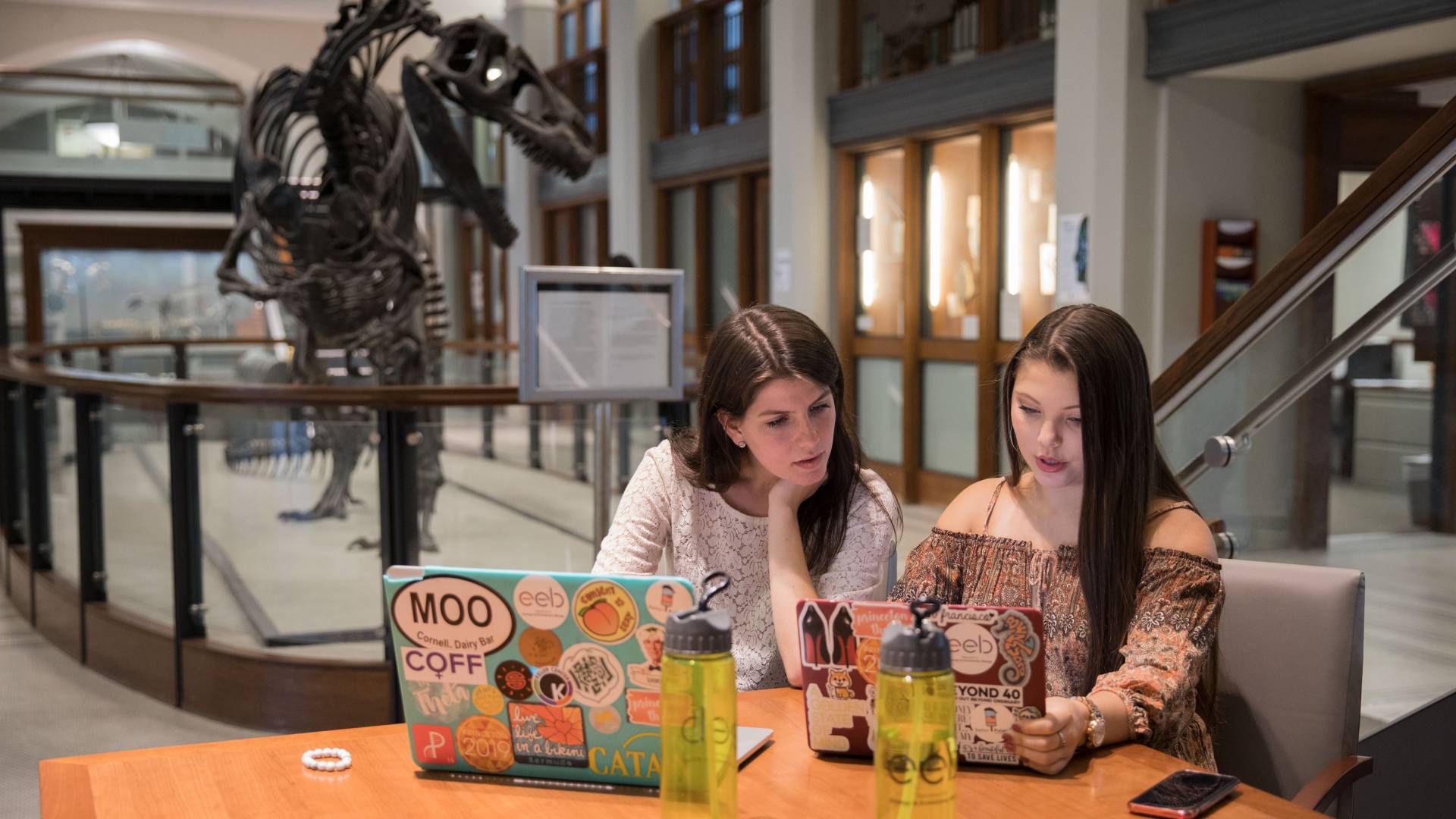 For their final project, juniors Maria Tokarska (left) and Mikaela Walkup, both in ecology and evolutionary biology, interviewed Princeton students to examine the relationship between food literacy and diet choices. “This felt more personal to us,” Tokarska said. “We’re both conscious of what we’re eating and we wanted to know, are other people conscious of what they’re putting into their bodies?” She and Walkup found that their peers were generally knowledgeable about food, but that didn’t always translate into better choices. “It’s interesting to look at what people are eating just because it’s there,” Walkup said. “It’s efficient and it’s easy. We process all this food because we have so many people to feed.” Walkup became more aware of what she was eating when she quit gymnastics after 14 years. “We didn’t think about the quality of the food,” she said. “All of a sudden I had to pay attention to what I was eating because I wasn’t working out all the time. I was aware that when I quit, I would have to make changes.” The class lessons and activities — such as when students tracked their nutritional intake for a week — showed Tokarska that there’s always more to learn about what we eat. “I’ve never been exposed to any class like this,” Tokarska said. “I love burgers, but I wasn’t aware of how bad for the environment raising cattle is. It’s changed my perspective on how what we eat can impact the environment.” 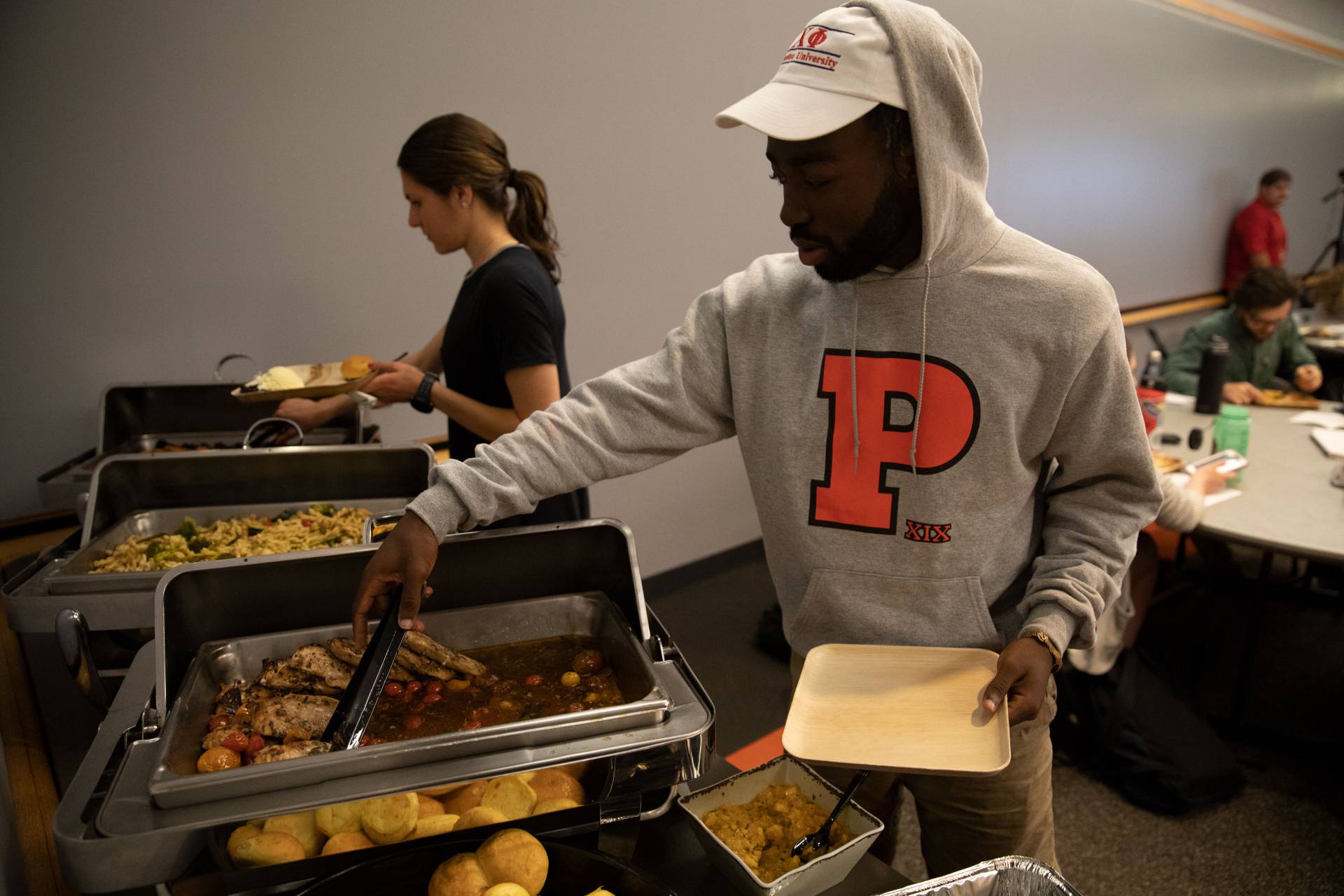 The May 8 final feast brought students together to present their final projects and eat from a menu they had selected based on themes learned in the class. Temi Aladeseru (front), a junior in ecology and evolutionary biology, worked with his group on the environmental impact of raising bobby calves — newborn calves that are removed from their mothers — to adulthood versus slaughtering them for veal. “It comes out to a hard choice between ethics and what’s good for everyone in the long run, which is a really hard choice, but it’s also something that we have to acknowledge when making these decisions,” Aladeseru said. Aladeseru was struck to learn how food choices resonate globally and environmentally. “I’ve learned how important food choices are on an individual level and a policy level, and how aggregate choices affect the ecology of the planet,” Aladeseru said. “It was a cool opportunity to take a class in something that’s current and a very pressing issue while taking it with a professor I really respect and admire.” 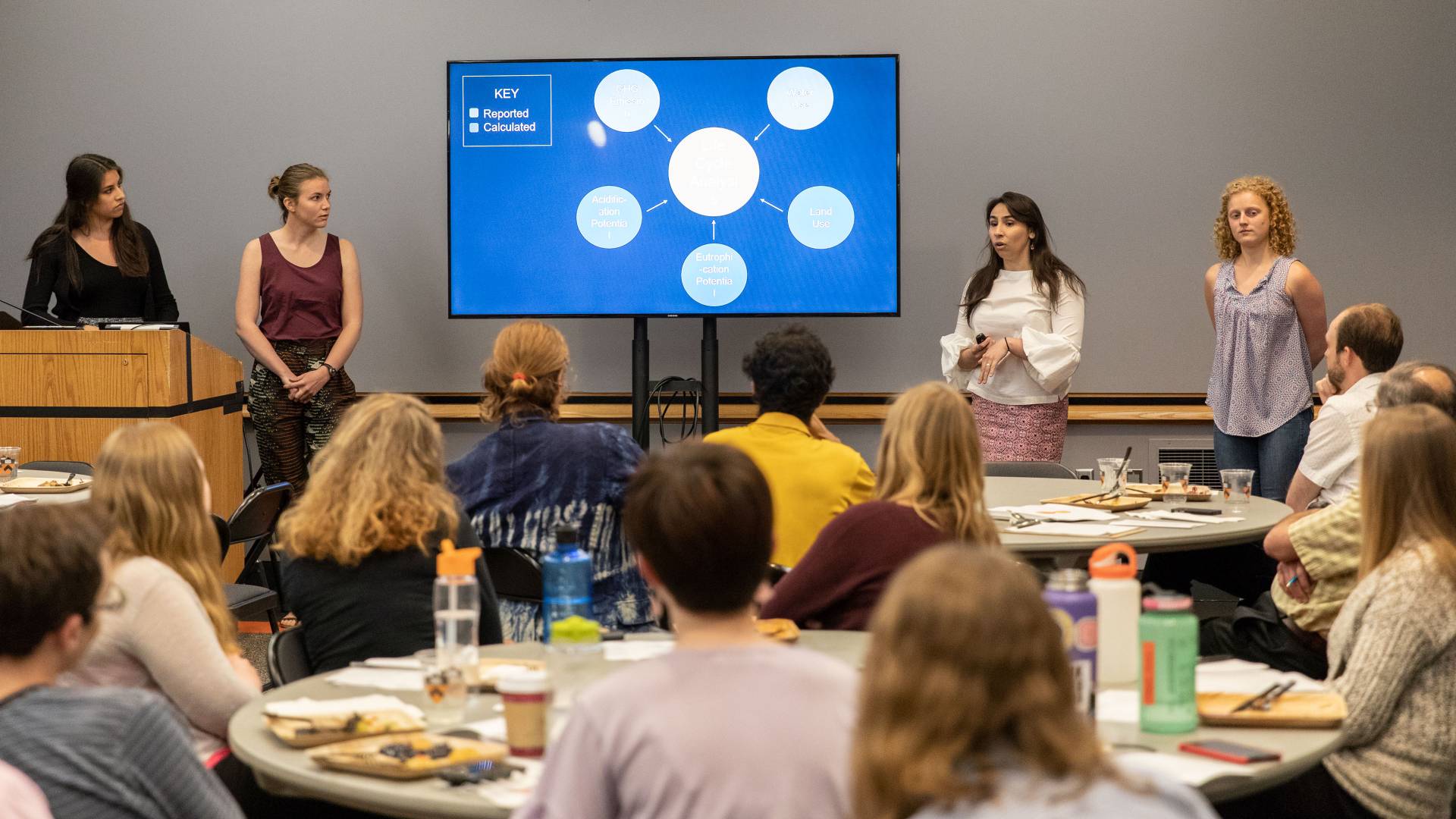 Marti Hale (second from right standing), a junior in chemistry, and her group assessed the environmental impacts of milk alternatives made from peas and oats. From Chicago, Hale has studied and worked in urban farming and in addressing food deserts, which are low-income areas with a dearth of affordable and fresh healthy options. “I don’t think a lot of people know enough about what’s going on to care about how our current system is infringing on biodiversity, or land quality, or even the quality of human life in other places,” Hale said. The course helped her realize the scale and diversity of the obstacles to feeding the world’s population. “It really pushed me to think outside of the urban setting, looking more globally at our problems and how we may not necessarily be able to apply the same strategy to every location where there are food issues,” Hale said. “There is no one [single] solution.”

The object of the class is not to give students answers to how we can effectively and responsibly feed future populations, but supply them with facts that will help them create solutions, Rubenstein said. “I can’t give one prescription nor will I give one prescription,” he said. “My job is to teach them the pieces that will form the foundations of what will be many answers.”