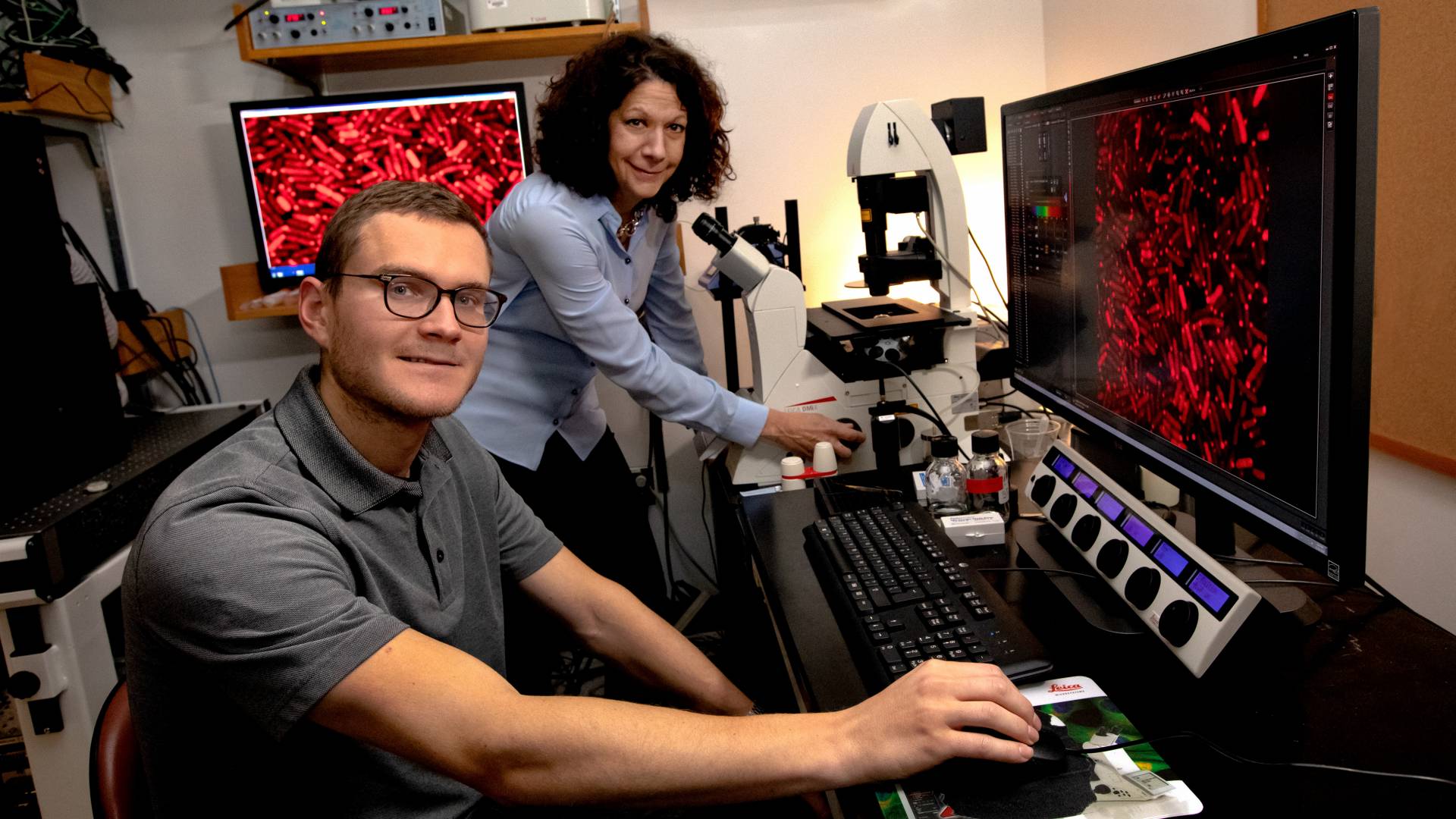 Professor Bonnie Bassler and graduate student Justin Silpe discovered a bacteria-killing virus that can eavesdrop on bacterial conversations. They re-engineered it to attack diseases including salmonella, E. coli and cholera.

Princeton molecular biologist Bonnie Bassler and graduate student Justin Silpe have identified a virus, VP882, that can listen in on bacterial conversations — and then, in a twist like something out of a spy novel, they found a way to use that to make it attack bacterial diseases like E. coli and cholera.

“The idea that a virus is detecting a molecule that bacteria use for communication — that is brand-new,” said Bassler, the Squibb Professor of Molecular Biology. “Justin found this first naturally occurring case, and then he re-engineered that virus so that he can provide any sensory input he chooses, rather than the communication molecule, and then the virus kills on demand.” Their paper will appear in the Jan. 10 issue of the journal Cell.

A virus can only ever make one decision, Bassler said: Stay in the host or kill the host. That is, either remain under the radar inside its host or activate the kill sequence that creates hundreds or thousands of offspring that burst out, killing the current host and launching themselves toward new hosts.

There’s an inherent risk in choosing the kill option: “If there are no other hosts nearby, then the virus and all its kin just died,” she said. VP882 has found a way to take the risk out of the decision. It listens for the bacteria to announce that they are in a crowd, upping the chances that when the virus kills, the released "kin" immediately encounter new hosts. “It’s brilliant and insidious,” said Bassler.

These E. coli bacteria harbor proteins from the eavesdropping virus. One of the viral proteins has been tagged with a red marker. When the virus is in the “stay” mode (left), the bacteria grow and the red protein is spread throughout each cell. When the virus overhears that its hosts have achieved a quorum (right), the kill-stay decision protein is flipped to “kill” mode. A second viral protein binds the red protein and sends it to the cell poles (yellow dots). All the cells in the right panel will soon die.

“This paper provides an entirely new perspective on the dynamic relationship between viruses and their hosts,” said Graham Hatfull, the Eberly Family Professor of Biotechnology at the University of Pittsburgh, who was not involved in this research. “This study tells us for the first time … that when a phage is in the lysogenic [stay] state, it is not ‘fast asleep,’ but rather catnapping, with one eye open and ears alert, ready to respond when it ‘hears’ signals that cells are getting ready to respond to changes in their environment.”

Bassler, who is also the chair of molecular biology and a Howard Hughes Medical Institute Investigator, had discovered years before that bacteria can communicate and sense one another’s presence, and that they wait to establish a quorum before they act in concert. But she had never imagined that a virus could eavesdrop on this quorum-sensing communication.

“The bugs are getting bugged,” she said with a laugh. “Plus, Justin’s work shows that these quorum-sensing molecules are conveying information across kingdom boundaries.” Viruses are not in the same kingdom as bacteria — in fact, they are not in any kingdom, because they are not technically alive. But for such radically different organisms to be able to detect and interpret each other’s signals is simply mind-boggling, she said. It’s not like enemy nations spying on each other, or even like a human communicating with a dog — those at least are members of the same kingdom (animal) and phylum (vertebrate).

After finding the first evidence of this cross-kingdom eavesdropping, Silpe started looking for more — and found it.

“He just started a brand-new field,” Bassler said. “The idea that there’s only one example of this cross-domain communication made no sense to us. Justin discovered the first case, and then, with his discovery in hand, he went looking more deeply and he found a whole set of viruses that harbor similar capabilities. They may not all be listening in to this quorum-sensing information, but it is clear that these viruses can listen in to their hosts’ information and then use that information to kill them.”

Silpe said he was drawn to work in Bassler’s lab because of her research on bacterial communication. “Communication seems like such an evolved trait,” he said. “To hear that bacteria can do it — her discovery — it was just mind-blowing that organisms you think of as so primitive could actually be capable of communication. And viruses are even simpler than bacteria. The one I studied, for example, only has about 70 genes. It’s really remarkable that it devotes one of those genes to quorum sensing. Communication is clearly not something higher organisms created.”

Once Silpe demonstrated that VP882 was eavesdropping, he began experimenting with feeding it misinformation to trick the virus into killing on command — to turn the predator into an assassin.

VP882 is not the first virus used as an antimicrobial treatment. Viruses that prey on bacteria are called “phages,” and “phage therapy” — targeting a bacterial disease with a phage — is a known medical strategy. But VP882 is the first phage that uses eavesdropping to know when it is optimal to kill its targets, making Silpe’s experiments with salmonella and other disease-causing bacteria the first time that phage therapy has used trans-kingdom communication.

In addition, this virus holds enormous promise as a therapeutic tool because it does not act like a typical virus, Bassler said. Most viruses can only infect a very specific type of cell. Flu viruses, for example, only infect lung cells; HIV only targets specific immune-system cells. But the virus VP882 has an “exceptionally broad host range,” Bassler said. So far, Silpe has only performed “proof of principle” tests with three unrelated bacteria: Vibrio cholerae (cholera), salmonella and E. coli. Those diseases have evolved separately for hundreds of millions of years, so the fact that they are all susceptible to this bacterial assassin suggests that many, many more are as well.

Hatfull is optimistic about the utility of this re-engineered virus for antibiotic-resistant bacteria. “Antibiotic resistance is clearly a major global health threat, and there is a clear and evident demand for new strategies and approaches to this problem,” he said. “Although we have admittedly found it tricky even to reach ‘first base’ with basic therapeutic use of naturally occurring phages, we can envisage the possibility of a ‘home run’ if we can engineer phages for therapeutic use that have very specific targeting.” These viral assassins might even slow down the emergence of antibiotic resistant strains, he said.

Bassler gives all credit for the discovery to Silpe. After identifying a new quorum-sensing gene in V. cholerae, he made the choice to search genome databases for that gene. It showed up in some cholera-related strains and exactly one virus. Bassler wondered if that could be a meaningless data artifact, but Silpe wanted to get a specimen of the virus and run experiments.

“He was gung-ho, and I thought, ‘What the heck, give this kid a little rope. If this isn’t working soon, we can always move on,’” she said. “His was a crazy idea, because there’s never, ever been evidence of a virus listening in on bacterial host information to decide whether to stay put or kill. But this lab was built on crazy ideas, like bacteria talking to each other, and we’ve kind of made a living out of it. … Of course, that’s the beauty of science, and science at Princeton, that you have enough resources to play those hunches out, and see if there’s a ‘there’ there. And this time, there was a big ‘there’ there.”

“A Host-Produced Quorum-Sensing Autoinducer Controls a Phage Lysis-Lysogeny Decision,” by Justin Silpe and Bonnie Bassler, will be published in the Jan. 10 issue of Cell and was released online Dec. 13 (DOI: 10.1016/j.cell.2018.10.059). It was supported by the Howard Hughes Medical Institute, NIH Grant 2R37GM065859, National Science Foundation Grant MCB-1713731, the Max Planck Society-Alexander von Humboldt, and the Department of Defense through the National Defense Science & Engineering Graduate Fellowship.