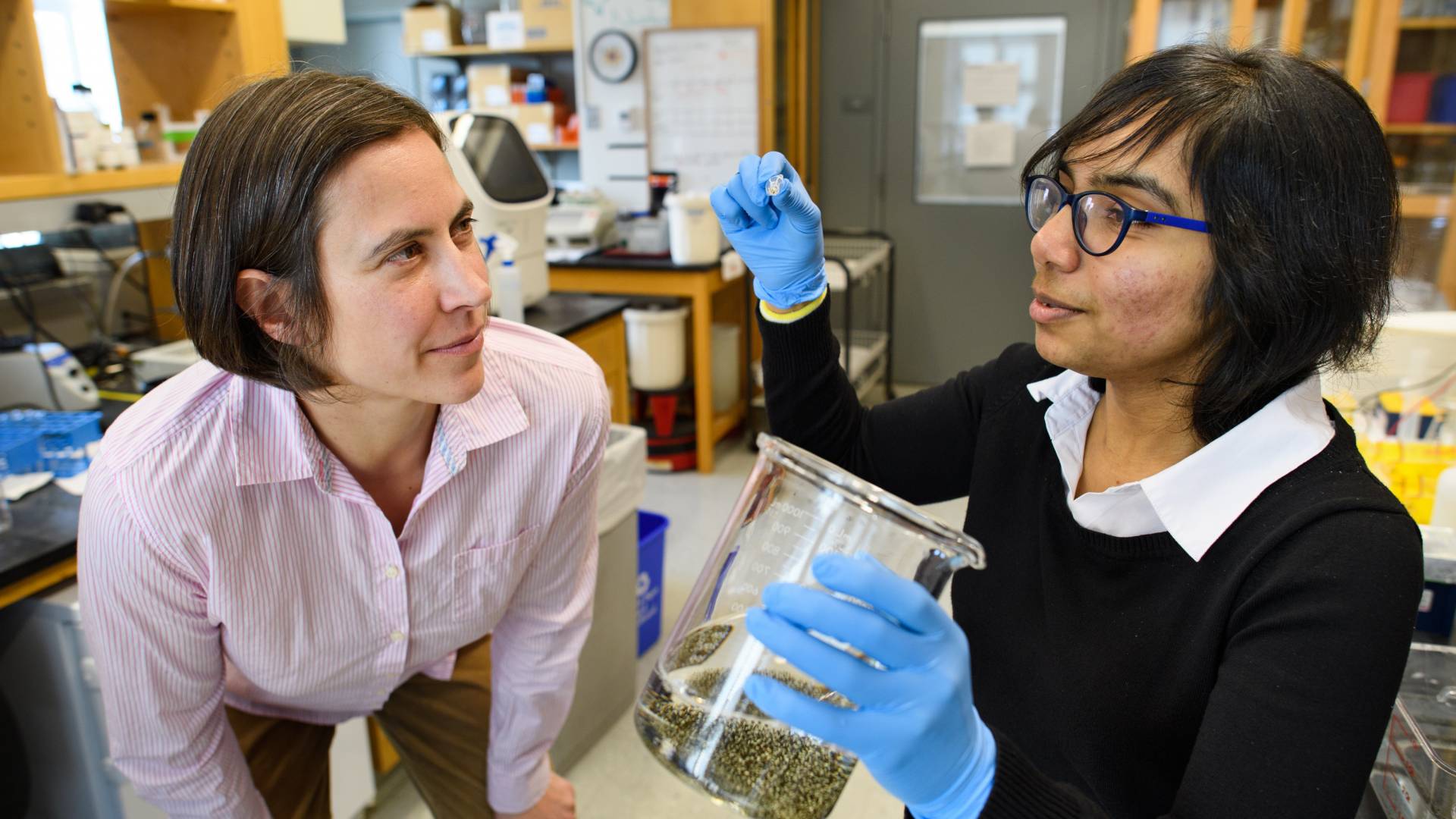 Biologist Sabine Petry (left) and graduate student Akanksha Thawani examine the Xenopus (frog) eggs from which they gather the raw materials to build microtubules, the skeleton of the cell.

Imagine standing in a lumberyard and being asked to build a house — without blueprints or instructions of any kind. The materials are all in front of you, but that doesn’t mean you have the first idea how to get from point A to point B.

That was the situation facing the Princeton biologists who are building microtubules, the skeleton of the cell, from scratch.

“We did not think it was possible,” said Sabine Petry, an assistant professor of molecular biology. For years, Petry and the researchers in her lab have dazzled the biological world with videos of what they call “the fireworks of life,” which show the branching and growth of these microscopic structures. “From making fireworks to getting to the recipe of how fireworks are made? We had imagined and brainstormed about it for five years.” In that time, her team had painstakingly determined the fireworks’ components, one protein at a time, and graduate student Akanksha Thawani had come up with a model for the sequence, but testing it seemed impossible.

But then the journal’s reviewers told them they couldn’t publish their model unless they proved it experimentally.

“Admittedly, after watching Akanksha work on this so long, when the referee asked for more work, I was skeptical that we could sort out the order of molecular attachments in any reasonable time,” said Howard Stone, Princeton’s Donald R. Dixon ’69 and Elizabeth W. Dixon Professor of Mechanical and Aerospace Engineering and Thawani’s co-adviser. “But Akanksha was focused and disciplined, and systematically tackled experiments that identified the order of the molecular attachments. It was stunning to follow her detective work.”

“They asked us, and we wanted to get it published, so that did the trick,” Petry said. “The review process gets a lot of bad press, but reviewers can sometimes push you to the next level.” The results of their work appear in the journal eLife.

This time-lapse video shows the growth and branching of microtubules, dubbed the "fireworks of life" because these microscopic structures make up the skeleton of the cell. Graduate student Akanksha Thawani and three professors — biologist Sabine Petry, engineer Howard Stone and biophysicist Joshua Shaevitz — succeeded in reverse-engineering the recipe for building these fireworks. Elapsed time is shown in seconds and the white scale bar shows 10 μm. (For reference, a human hair is 50 to 100 μm across.)

Building a house without blueprints

Microtubules are the bricks and mortar of the cell, used to build cell walls and the spindles of mitosis and meiosis — without them, even single-celled organisms couldn’t reproduce — but until now, no one knew exactly how microtubules branch off each other. For a decade, researchers have known that the branching, caused as the microtubules grow from each other, was key to assembling spindles and making connections between the cell components.

“The missing piece for a decade or so has been this microtubule branching — that microtubules don’t grow just linearly, but they actually branch, and they can branch again and again, creating those fireworks,” Petry said.

While Petry’s team had identified the components necessary to build microtubules, they hadn’t put together the sequence — the recipe — that spelled out exactly how to assemble them, at the molecular level, to make the spindles grow and branch into fireworks. And for the most part, that was fine. Biology did it for them. If they put the right components together, the fireworks just grew.

But how did it happen, exactly? That was the question that nagged at Thawani, a chemical and biological engineering graduate student doing her research in Petry’s lab.

“For the longest time, I’ve been staring at them and wondering how this worked, from scratch,” said Thawani, who recently won the prestigious Charlotte Elizabeth Proctor Fellowship for graduate students in their final year. “We start from no microtubules at all, and then, within 15 minutes, we have these beautiful structures. How do you generate a structure from those nanometer-sized proteins? What was it about their binding kinetics or their organization that would result in the structures that we see?”

Thawani was uniquely positioned to tackle these questions, having spent years studying chemical engineering and physics as well as molecular biology. She has essentially invented a new subspecialty in-between the three fields. “At the intersections between disciplines — that’s where the next, best science is,” she said.

The eLife paper stands at that unusual crossroads: of the four authors, all except Thawani are principal investigators (PIs) of their own research labs, in three usually unrelated fields: Petry in biology; Stone in engineering; and Joshua Shaevitz, a professor of physics and the Lewis-Sigler Institute for Integrative Genomics.

“I don’t know of many examples where there is one first author and then three PIs,” said Petry. “I think that’s a strength of Princeton. I don’t know any other place where it’s that easy to get three professors together to make a project happen.”

The key, Thawani had realized, was creating a computer model based on precise measurements of the growth patterns of microtubules. That required imaging the fireworks with total internal reflection fluorescence (TIRF) microscopy, a strength of the Petry lab, which has developed techniques to optically isolate a 100 nanometer-thick region of the sample so that branching microtubules can be seen in a sea of background molecules. (For reference, a human hair is about 500 times wider than that.)

But even then, every pixel recorded by the camera included thousands of molecules. Thawani had to find a way to disaggregate the visual data to make single-molecule observations, which required months of complicated image analysis — and help from Shaevitz, who has spent years on image analysis.

Ultimately, Thawani measured exactly when and where a single protein binds to an existing microtubule to start a new branch, as well as its rate of growth, looking at one molecule at time.

“The traditional approach, where you change the amounts of different molecules in the branching reaction, doesn’t allow you to figure out the order that things need to happen,” said Shaevitz, who is also the co-director of the NSF-funded Center for the Physics of Biological Function. “By looking at individual molecules, we can literally watch the assembly piece by piece as it happens.”

Thawani then created a computer model using those parameters. Other scientists have tried to model microtubule branching before, but none had access to such accurate measurements to test their model outputs against. She then tested various sequences that the researchers had brainstormed over the years, and the model ruled out all but one of them.

So now the research team had the ingredients — proteins called TPX2, augmin and γ-TuRC — as well as the sequence of steps, but the computer couldn’t tell them which protein to add when. And as anyone who has assembled kit furniture or baked bread from scratch knows, doing the steps out of order just doesn’t work.

The experiments required by the reviewers revealed that Thawani and Petry’s expectations were exactly backwards. “We went in thinking it had to be augmin first and then TPX2, but it turned out to be the other way around,” Thawani said. “That was the twist.”

With that discovery, the researchers had the complete recipe to generate microtubule fireworks: If TPX2 is deposited on existing microtubules, followed by binding augmin with γ-TuRC, then new microtubules will nucleate and branch.

As a final step, they confirmed that the proteins would bind with precisely the speed predicted by Thawani’s computer model. “That was the third breakthrough,” Petry said, “that those numbers matched, that what was predicted by her model in the computer was true for the biology.”

“This work from Petry is really an important addition that will help drive the field forward,” said Daniel Needleman, the Gordon McKay Professor of Applied Physics and a professor of molecular and cellular biology at Harvard University. “I think that this work, in combination with results from my group and from Jan Brugués (at the Max Planck Institute of Molecular Cell Biology and Genetics in Dresden), have really clarified the ‘rules’ for microtubule nucleation in spindles. The next step will be to figure out the molecular processes that govern those rules. Petry and colleges have setup a system that should really help to do that.”

Looking back, Petry said, the work was “full of surprises, both experimentally and in what one can achieve and how it can be achieved. Revisiting this long-standing question, incorporating professors from three fields, the review process — the whole system worked.”

“Spatiotemporal organization of branched microtubule networks,” by Akanksha Thawani, Howard A. Stone, Joshua W. Shaevitz and Sabine Petry appeared in the May 8, issue of the eLife (DOI: 10.7554/eLife.43890). This work was supported by the American Heart Association predoctoral fellowship 17PRE33660328 (to AT), the NIH New Innovator Award 1DP2GM123493, Pew Scholars Program in the Biomedical Sciences 00027340, David and Lucile Packard Foundation 2014–40376 (all to SP), and the Center for the Physics of Biological Function sponsored by the National Science Foundation grant PHY-1734030.