The Department of Physics

Steven Scott Gubser, a professor of physics at Princeton University and a highly accomplished scholar of string theory and black holes, died as a result of a rock-climbing accident on Saturday, Aug. 3, in Chamonix, France. He was 47 years old. At the time of his death, Gubser was on vacation in Europe with his family. 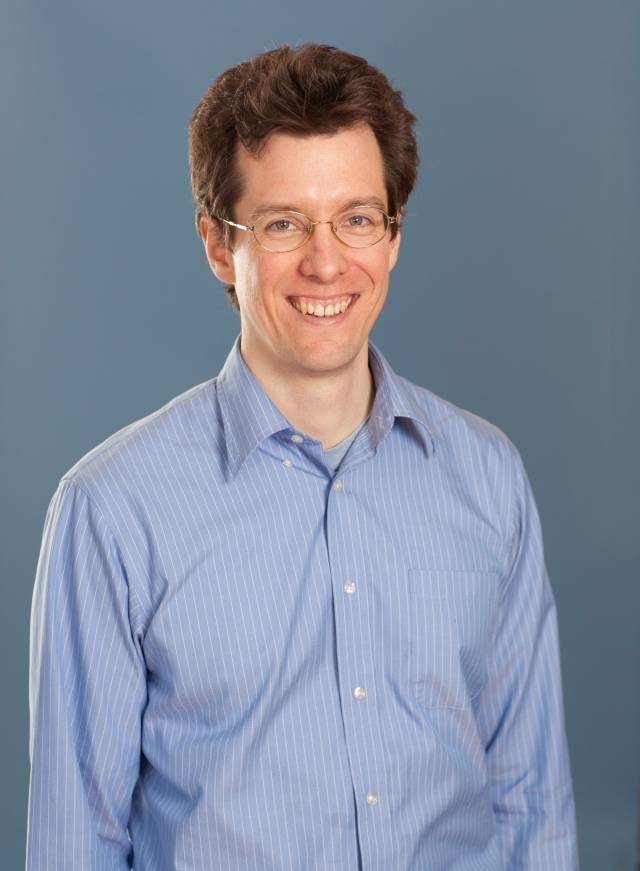 “This is such a loss for everyone,” said Herman Verlinde, the Class of 1909 Professor of Physics and department chair. “I have known Steve for over 25 years, first as a stellar student and then as an equally stellar faculty colleague and scholar. He truly loved physics and was amazingly good at it. He deeply cared about teaching and sharing his enthusiasm for physics with his students. His energetic presence, disarming humor and cool style made him into one of our most popular teachers and mentors. Princeton was his home and he contributed to the University in many ways. We will dearly miss him.”

Gubser came to Princeton in 1990 as an undergraduate member of the Class of 1994. He excelled in his studies of physics and other subjects, and graduated as the valedictorian of his class. For his senior thesis he was awarded the LeRoy Apker Award of the American Physical Society, its highest distinction for undergraduate research. After completing a one-year master’s program at Cambridge University, Gubser returned to Princeton in 1995 as a graduate student, and obtained his Ph.D. in 1998. His outstanding graduate research during that period included original and highly influential papers on exact relations between string theory and quantum field theory, which have continued to reverberate for over 20 years since their publication.

After two years as a junior fellow at the Harvard Society of Fellows, Gubser returned to Princeton as a faculty member. He was also a professor at Caltech in 2001 while on leave from Princeton. He was granted tenure at Princeton in 2001 and promoted to full professor in 2005.

Gubser’s research has broken new ground on the connections between theoretical models of black holes and the real-world many body systems such as the quark-gluon plasma produced at the heavy-ion colliders. His work also has shed new light on the mysterious aspects of superconductors with high critical temperature.

Gubser has received a number of awards and honors for his research. They include a Guggenheim Fellowship, a Blavatnik Award for Young Scientists, a Gribov Medal of the European Physical Society, and most recently a Simons Investigator Award. Gubser was one of the founding members of the Princeton Gravity Initiative. He also served as associate chair for undergraduate affairs in the physics department. 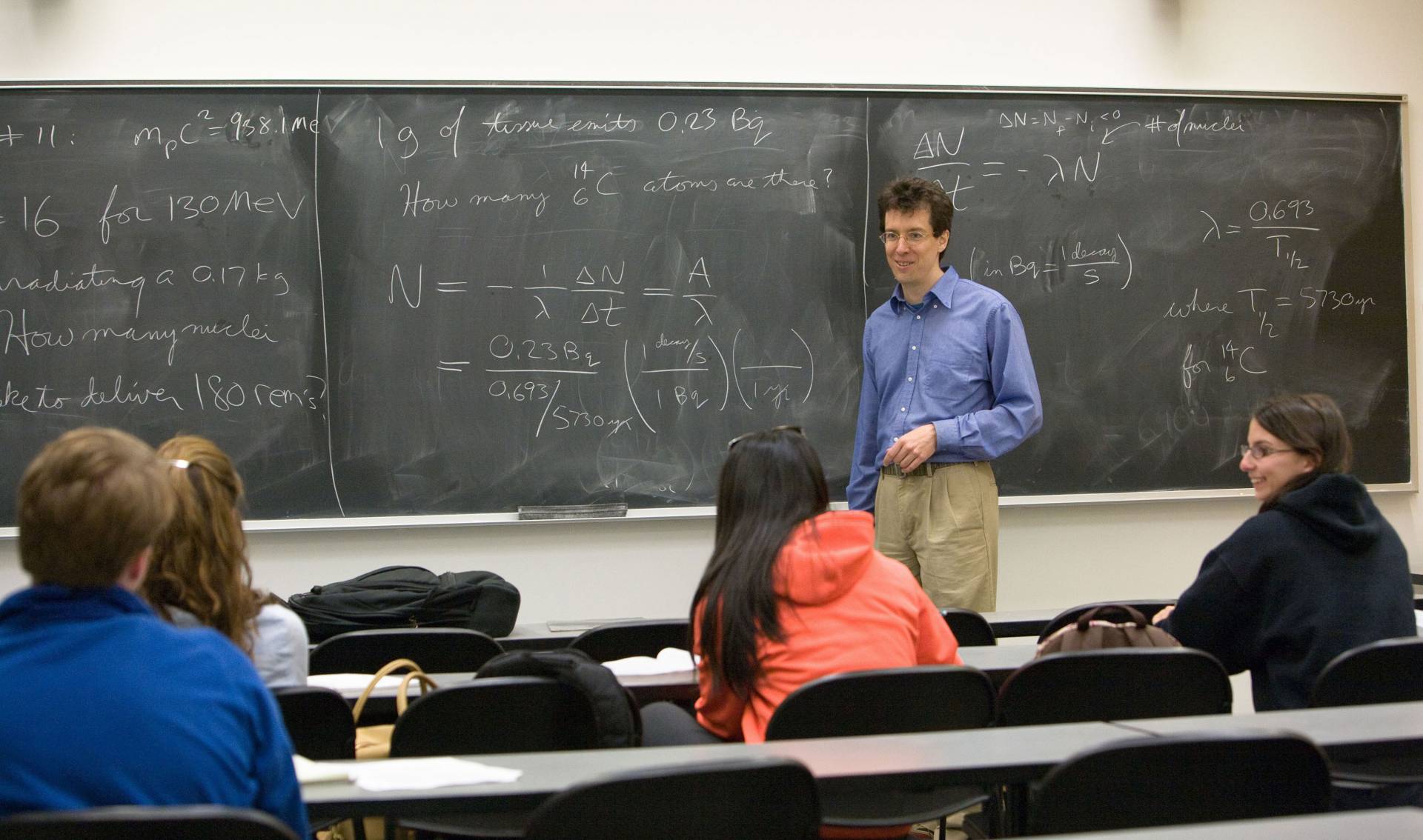 Steven Gubser was known for taking abstract physical principles and applying them to everyday situations. Shown: Gubser teaching a physics class in 2010.

Besides being a prolific scientist, Gubser dedicated his talents to communicating science to the general public. Among Gubser’s popular books are “The Little Book of String Theory,” published in 2010, and “The Little Book of Black Holes,” published in 2017 in collaboration with Professor Frans Pretorius. Both books were published by the Princeton University Press, and they have been highly successful in communicating abstract theoretical ideas to general audiences, attracting worldwide readership.

Gubser was also a successful and innovative classroom teacher of undergraduate and graduate courses alike. He introduced new teaching methods to established courses such as Physics 101 and 102. He also created the new popular course “Invitation to Theoretical Physics,” which has attracted a number of sophomores to majoring in physics.

Gubser’s teaching talents were on full display when he presented Reunions physics demonstrations, packing the auditorium with enthusiastic audience members of all ages, most recently at his 25th reunion. View a video clip from a 2015 Reunions demonstration. 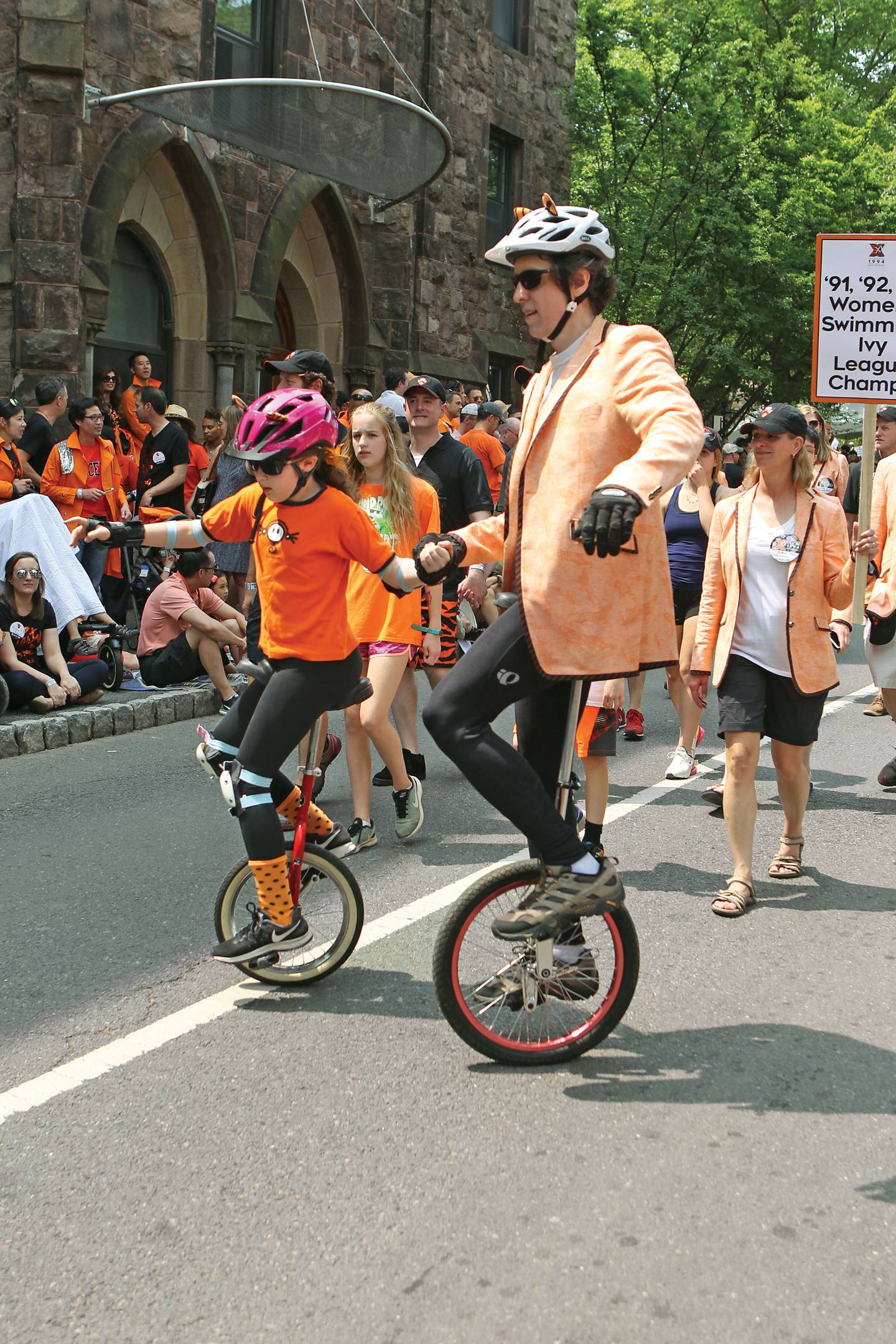 He was often spotted unicycling around town with his two younger daughters, including the annual alumni P-rade and Memorial Day parades. He even once unicycled across a frozen Lake Carnegie. Furthermore, he was an accomplished piano player and regularly performed at the physics department’s annual recital, most recently accompanying and singing with his oldest daughter, who sings in an a cappella group at Princeton High School.

Igor Klebanov, the Eugene Higgins Professor of Physics and director of Princeton Center for Theoretical Science, supervised Gubser’s senior and Ph.D. theses. “I am shocked and devastated by the untimely passing of Steve,” he said. “I have known him from the time when he, as a Princeton junior, enrolled in a graduate course I was teaching, and was by far the best student in the class. We have collaborated on many research papers, and my most influential paper by far was written in collaboration with him and Alexander Polyakov. Steve’s death is a huge loss for Princeton University, and for the world of theoretical physics. I will miss him greatly.”

Grace Sommers, Class of 2020, said: “Since coming to Princeton, I’ve been lucky to interact with Professor Gubser in many environments, from taking his “Invitation to Theoretical Physics” class as a freshman to having him as second reader for my junior paper. Most recently, I had a blast serving as one of his assistants for the Reunions Lecture. My dad, who came to hear the lecture, said his favorite part was Professor Gubser’s witty commentary, especially his remark that 'for a theoretical physicist, 3 is approximately equal to 1.'”

Gubser was born in Tulsa, Oklahoma, on May 4, 1972. Soon after, his family relocated to Aspen, Colorado. Gubser attended secondary schools in Aspen and in Denver, and quickly established himself as a star student of physics and mathematics. As a member of the U.S. team at the 1989 International Physics Olympiad held in Warsaw, Poland, Gubser achieved the top individual score. This was a preview of his highly successful career as a theoretical physicist, which was cut short tragically on Aug. 3.

Gubser is survived by his wife, Laura Landweber, Princeton Class of 1989, and their daughters, Cecily, Heidi and Lillian.

A celebration of Gubser’s life and work is planned for the start of the fall semester. Donations in Gubser’s memory may be made to the Princeton Department of Physics.

View or share comments on a blog intended to honor Gubser’s life and legacy. 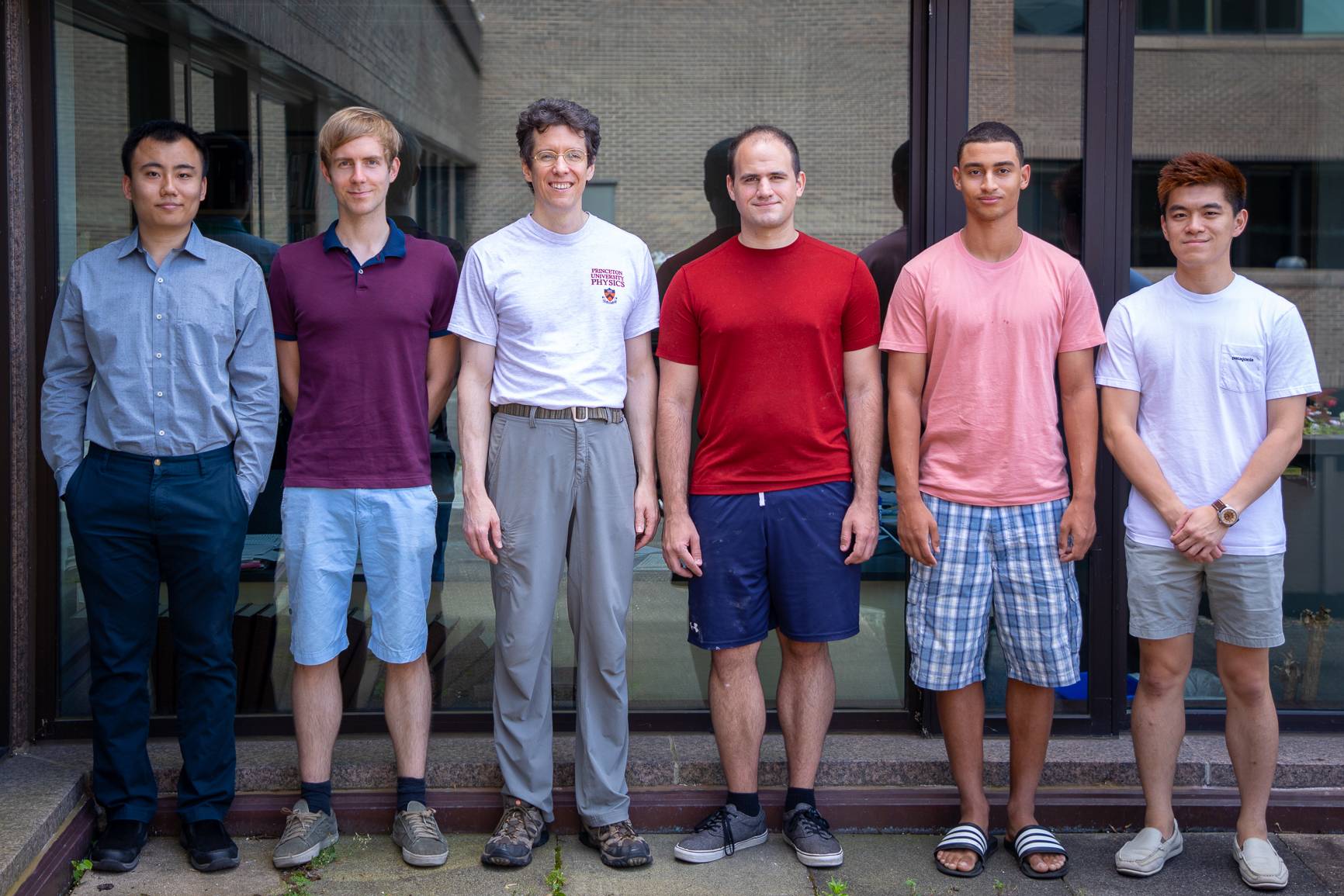 Physics Professor Steven Gubser mentored undergraduate and graduate students. In this photo from the 2018-19 academic year, Gubser (third from left) stands with his lab group of seniors and Ph.D. students in physics.

Photo courtesy of Department of Physics