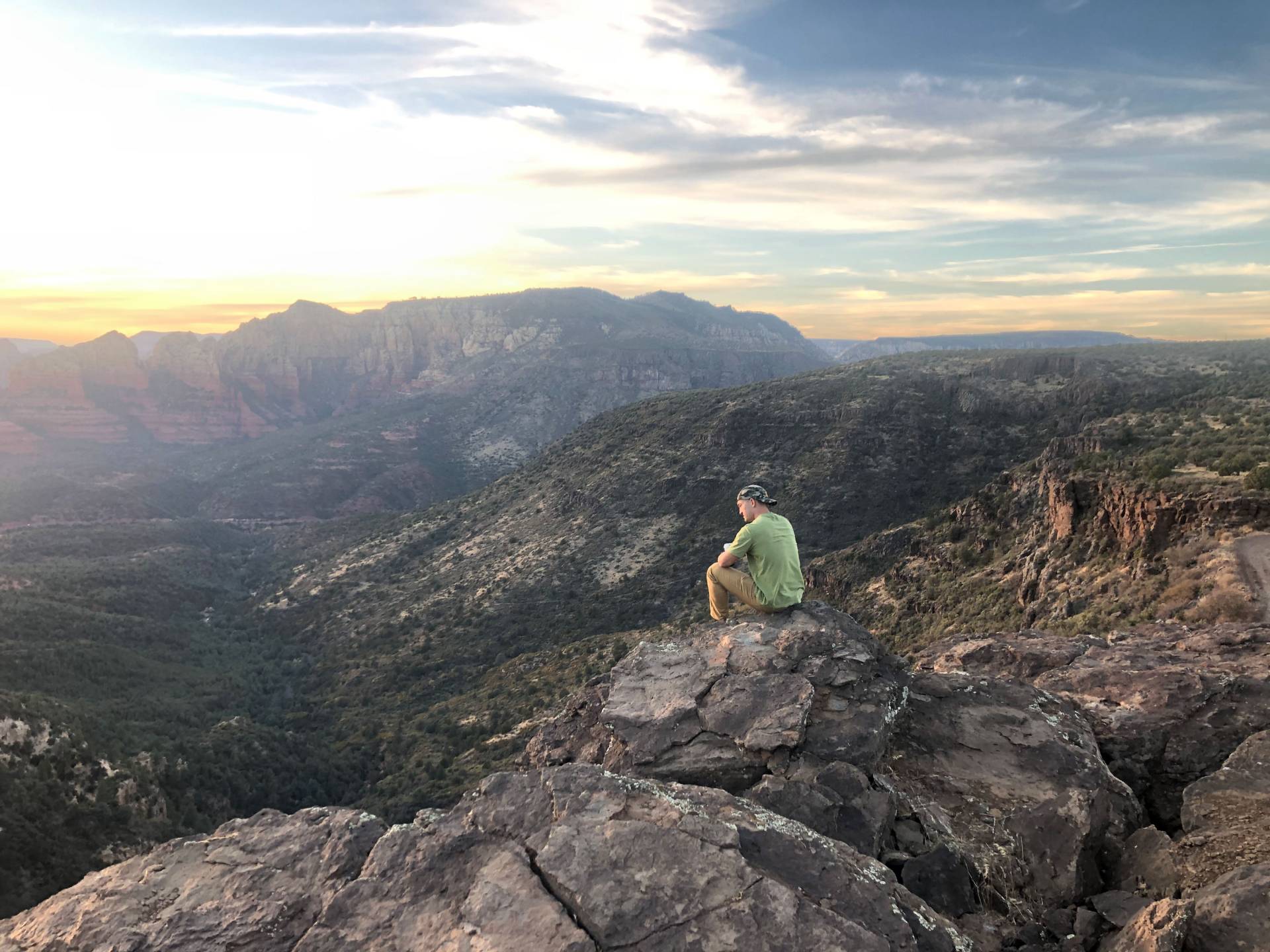 Princeton graduate student Jeff Phaneuf took this photo of his friend during an Adventurelist exploration in Sedona, Arizona. Adventurelist is a two-sided marketplace for guided adventure sports, and the startup recently won a pitch competition during the first Princeton Startup Bootcamp held virtually this January. Teams of graduate students and postdoctoral researchers forged and strengthened entrepreneurial ventures during the bootcamp as part of a new Princeton Innovation program.

The bootcamp is the latest new program to launch under Princeton Innovation, led by Vice Dean for Innovation Rodney D. Priestley.

"We want to support graduate students and postdoctoral researchers who are interested in pursuing entrepreneurship," said Priestley, the Pomeroy and Betty Perry Smith Professor of Chemical and Biological Engineering. "Bringing Techstars to Princeton through this intensive bootcamp is one way to complement their scholarly training."

The 33 graduate students and postdocs on the ten teams participated in virtual workshops during Wintersession on how to refine their ideas, how to develop their business models and more. Ten experienced startup founders and investors mentored the teams and provided feedback on their ideas. The bootcamp ended with a virtual pitch competition judged by a panel of friendly venture capitalists, with a $10,000 prize for the top startup.

The second Princeton Startup Bootcamp, Powered by Techstars program, will return in May for a new cohort of Princeton graduate students and postdoctoral researchers. Applications will open on March 17.

Graduate student Jeff Phaneuf from the School of Public and International Affairs said the January bootcamp forced him to challenge his assumptions. He is the founder of Adventurelist, a two-sided marketplace for guided adventure sports. "It was nice to get a fresh set of eyes on your project, challenge some of the things that you've just taken for granted, and really start to rethink some of those things," Phaneuf said.

One of the fresh sets of eyes belonged to Lucy Partman, a doctoral candidate in the Department of Art and Archeology specializing in American art and visual culture. Partman is interested in entrepreneurship but is not yet working on a company of her own. "One of the key reasons I took part in the bootcamp was to work with people from different disciplines," Partman said. "I believe deeply in the potential of interdisciplinary work, which is something we often talk about conceptually in academia. I think that it really can and does happen in the entrepreneurial space."

For Phaneuf, the bootcamp emphasized the concept that today's entrepreneurship is about community-building rather than just sales. "And we're realizing that if you simply build a marketplace entity that's purely transactional, that's missing the bar in today's age. And it drove us to think a lot more about community, to think a lot more about how you allow your users to interact with one another and to interact with the subject matter." As a result of working with his team and the mentors brought in by Princeton and Techstars, Phaneuf plans to specifically develop the community aspect of Adventurelist, including starting a podcast.

This approach to scholarly training appealed to Partman. "I think there are many commonalities between graduate students and entrepreneurs. In terms of the types of skills they develop and work they do, they are not so different," Partman said. "A key personal goal for me in doing the bootcamp was to see how the skills I have been developing both inside and outside of academia can be relevant and valuable in an entrepreneurial space. Much of the work I have done in the past has entrepreneurial elements."

"Our hope for this program was that participants would get a structured introduction to the entrepreneurial mindset, and that they would experience the benefit of multidisciplinary groups, which makes for better problem solving," said Anne-Marie Maman, Class of 1984 and executive director of the Princeton Entrepreneurship Council. "We can say that these objectives were accomplished. We look forward to watching as this cohort continues through Princeton."

The Techstars bootcamp is another avenue for postdoctoral researchers to explore entrepreneurship as a career path. "I enjoyed recruiting postdocs to take advantage of this professional growth opportunity," said Kate Hammond, the Office of the Dean of the Faculty’s career transition adviser. “Thinking deeply about end users and learning to pitch an idea to a specific audience is an incredibly valuable skill. The diverse group of talented mentors gave practical feedback that helped everyone advance their ideas. It was fascinating to watch teams respond to a mentor’s input, pivot, and try something new within such a short timeframe.”

"It really helped to work with a team that did not have a background in chemistry in general, but had the entrepreneurial spirit," said Maryam Elfeki, a postdoctoral researcher in the laboratory of Mohammad R. Seyedsayamdost, associate professor of chemistry. Elfeki is developing a drug discovery platform called Cryptyx, which is based on intellectual property that originated in Prof. Seyedsayamdost’s lab. Of the several impactful outcomes from the bootcamp for Cryptyx, Elfeki benefited greatly from the input she received from her team members to refine her problem statement. "Our original pitch was to solve the whole problem of drug discovery, but instead I defined a more succinct problem," Elfeki said. Making several new connections in the Princeton entrepreneurial community was another impactful outcome for Elfeki and Cryptyx.

The January program was the first-ever bootcamp hosted by Techstars with a university, according to Techstars facilitators Laura Sanders and Ronan Roche.

"The training, mentorship and hands-on experience that the bootcamp provided helped 60% of the participants in making a go/no go decision on their prospective venture," said Tony Williams, New Ventures Associate at the Office of Technology Licensing. "We know that not all attendees will end up in the entrepreneurial world, but we do think that a good understanding of the entrepreneurial mindset is important no matter what they choose to do when they leave Princeton."

Adventurelist was selected as the top startup at the pitch competition at the end of the bootcamp, and won the $10,000 prize from Princeton Innovation. Phaneuf plans to use the winnings for business essentials such as corporate filing fees and website development.  Phaneuf and Adventurelist will also continue to develop and refine their venture with additional mentorship and resources provided by the Keller Center’s eLab Accelerator this summer.

University Administrative Fellows program prepares Ph.D.s for careers within and beyond academia