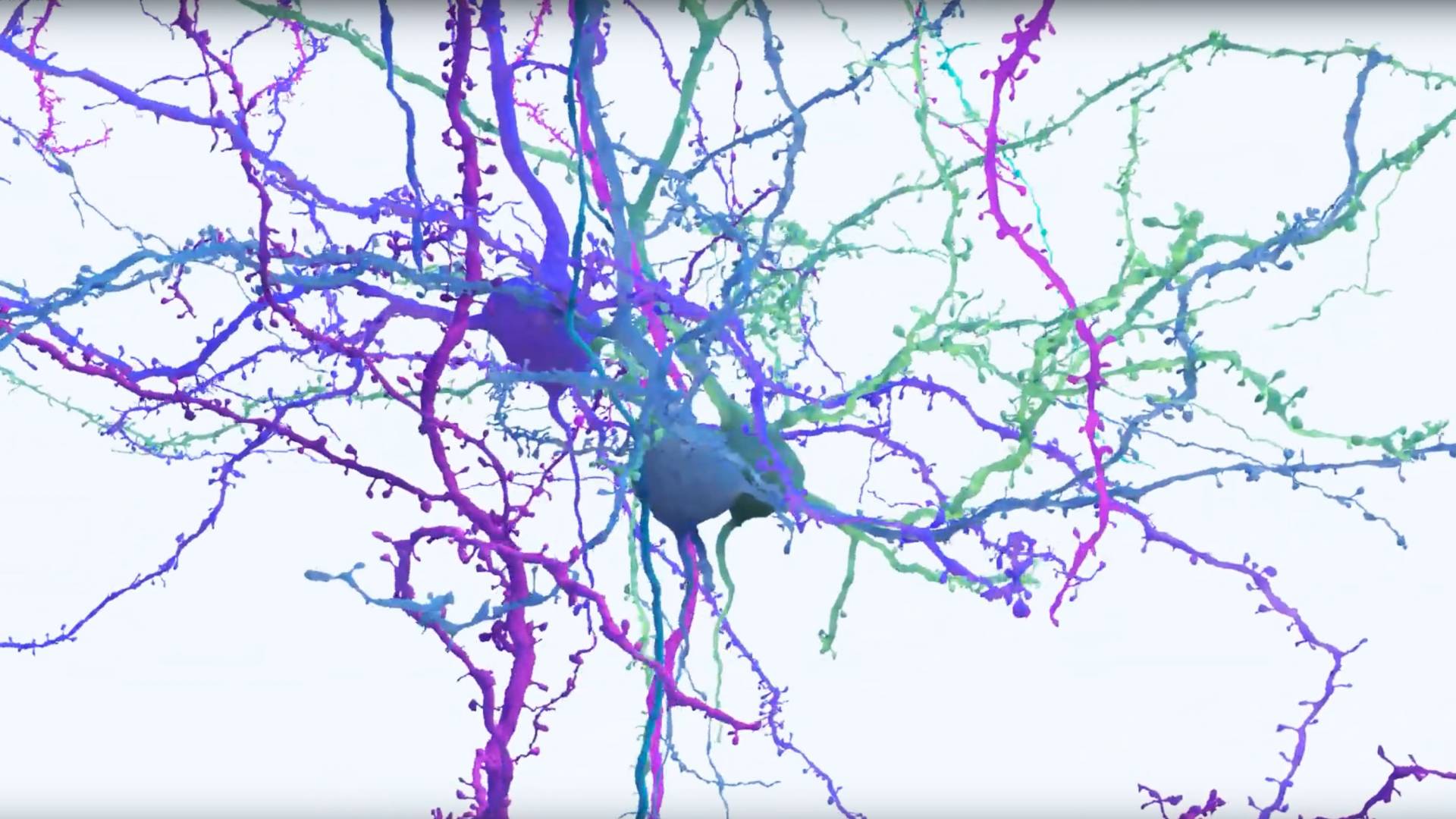 Years of work across three institutions has resulted in one of the largest reconstructions of neural circuits in human history, including this cortical column, a mysterious yet ubiquitous structure in mammalian brains. These neurons are just a glimpse of the 200,000 cortical cells and 500 million synapses that can be browsed at the MICrONS Explorer website.

Neuroscientists and computer scientists from Princeton University, the Allen Institute and Baylor College of Medicine have just released a collection of data that marries a 3-D wiring diagram with the function of tens of thousands of neurons to create the most detailed examination of mammalian brain circuitry to date.

“Our five-year mission has been truly arduous, with an ambitious goal that many regarded as unattainable,” said H. Sebastian Seung, Princeton’s Evnin Professor in Neuroscience and a professor of computer science, who is one of the lead scientists of MICrONS. “In the first year, a lab member argued to me that even the Phase 1 pilot would be impossible. Fast-forward to today, and we are releasing a cubic millimeter of reconstructed mouse cortex, which is 1000 times larger than the Phase 1 target.”

The dataset, which is now publicly available for anyone to browse and use, maps the fine structures and connectivity of 200,000 brain cells and close to 500 million synapses all contained in a cubic millimeter chunk of mouse brain — approximately the size of a grain of sand — from the visual neocortex, the part of the mammalian brain that processes what the eyes see. 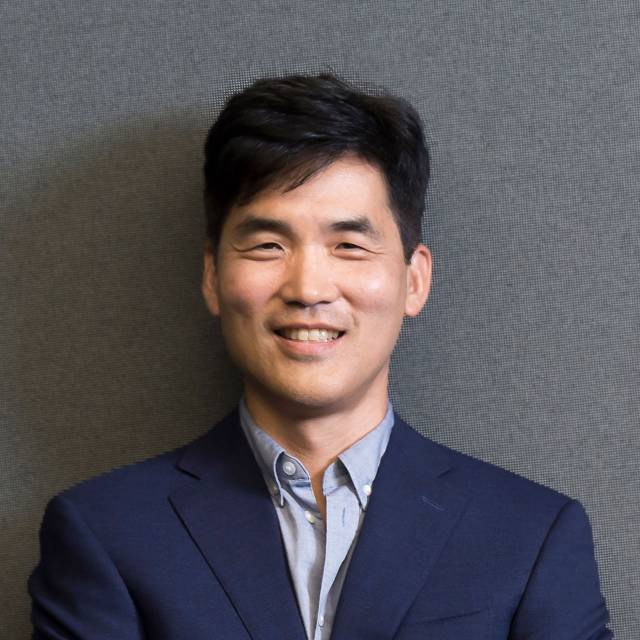 H. Sebastian Seung, the Evnin Professor in Neuroscience and a professor of computer science at Princeton University

“The cerebral cortex is the largest structure in the human brain, and has attained an almost mythic status,” said Seung. “It was dubbed an ‘enigma of enigmas’ by Santiago Ramon y Cajal, the 1906 Nobel laureate and Spanish hero who pioneered the mapping of neural circuits. We like to think that Cajal would be delighted by our 21st century reconstruction of a piece of cortex. And I think we're delighted too, though we're still too exhausted by the five-year mission to realize it!”

This massive project, dubbed the Machine Intelligence from Cortical Networks (MICrONS) program, took five years to complete and was funded by the Intelligence Advanced Research Projects Activity. The goal of the research funding was to mine brain-wiring information to improve machine learning. But the dataset is also valuable to the neuroscience field — both for scientists seeking to understand how the brain conveys information along defined circuits, and for biomedical researchers wanting to treat brain disorders where wiring or connections are altered.

“We’re basically treating a brain circuit as a computer, and we asked three questions: What does it do? How is it wired up? What is the program?” said Clay Reid, senior investigator at the Allen Institute and one of the lead scientists of MICrONS. “Experiments were done to literally see the neurons’ activity, to watch them compute. The reconstructions that we’re presenting today let us see the elements of the neural circuit: the brain cells and the wiring, with the ability to follow the wires to map the connections between cells. The final step is to interpret this network, at which point we may be able to say we can read the brain’s program.”

The dataset joins the ranks of other recently released wiring diagrams from human and fruit fly brains captured using the same technology: electron microscopy. This method reveals incredible details of an entire microscopic landscape — in this case, the densely packed topography of tendrilled neurons, astrocytes, blood vessels and other cells that make up the brain’s physical matter, as well as all the minuscule internal components of each cell.

The newly released MICrONS data contains the most cells and connections of any such dataset to date, and it is large enough to capture entire local circuits and near-complete 3-D shapes of individual mouse neurons. Some neurons make connections at incredibly long distances, sending their axons all the way across the brain, and those long-distance connections aren’t represented fully in this dataset. But the cubic millimeter volume was chosen to catch circuits across multiple brain areas involved in vision while also capturing the structure of as many entire neurons as possible.

Before the structural data was gathered, the research team at Baylor captured neurons’ activity in this part of the brain as the mouse viewed images or movies of natural scenes. "The neocortex contains billions of neurons communicating through trillions of connections that have endowed mammals with astonishing capabilities. A key question to untangling this bewildering complexity is to discover the relationships between the wiring rules and the functional properties of neurons,” said Andreas Tolias, a professor of neuroscience and the director of the Center for Neuroscience and Artificial Intelligence at Baylor College of Medicine and one of the lead scientists of MICrONS. “This program is unique since it enabled us to assemble an interdisciplinary team to perform a very ambitious experiment that will enable us to answer this question.”

After the Baylor experiments, Allen Institute researchers preserved and sliced the brain piece in more than 27,000 slices, each only 40 nanometers thick, capturing a total of 150 million images of those slices using customized electron microscopes. The cutting process ran around the clock for 12 days, during which teams of biologists, engineers and software developers stood watch in shifts, ready to stop and restart the instrument at a moment’s notice if the cutting went awry.

Then the Princeton team used deep learning to “segment” the images, defining each cell and its internal components individually. A team of software engineers, students and postdocs at Princeton used convolutional nets, painstakingly trained over months, to align the serial section images into a 3-D image stack, detect neuronal boundaries and identify synaptic partners. Each step was distributed over supercomputers running for days at a time.

The result: beautiful, intricate digital renderings of 200,000 brain cells and the connections between them, many of which had never been captured in their complete form before.

“I feel privileged to have worked with such an amazing team at Princeton, and our outstanding partners at the Baylor College of Medicine and the Allen Institute,” said Seung. “We have been rewarded by breathtaking new vistas of the cortex. As we transition to a new phase of discovery, we are putting our energies into building a community of researchers who will use the data in many ways, most of which we cannot predict. Only the collective efforts of a community can realize the resource's potential for enabling new discoveries about the brain.”

The public data collection is hosted online by the Brain Observatory Storage Service & Database, and Amazon Web Services is making the data freely accessible on the cloud through its Open Data Sponsorship Program. Google contributed storage and computing engine support through Google Cloud, and an open-source visualization tool Neuroglancer through Google Research.

This article contains material from Rob Piercy, senior director of communications for the Allen Institute, and Liz Fuller-Wright, Princeton University Office of Communications.