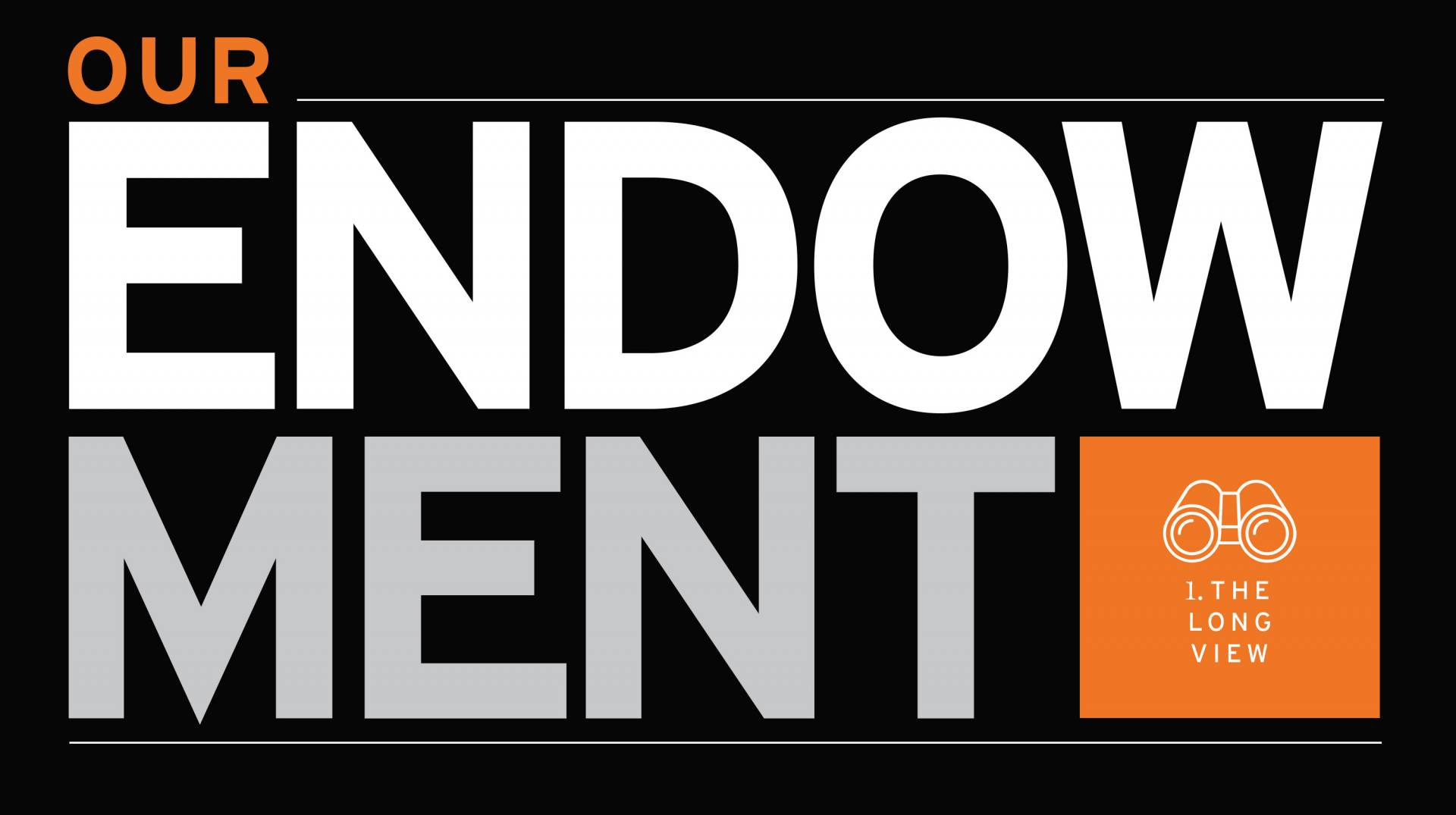 Princeton’s endowment is the financial foundation that underpins the University’s teaching and research mission. From transformative financial aid to groundbreaking faculty research to the day-to-day operation and maintenance of the campus, the endowment is essential to Princeton’s today, tomorrow and future.

“Our endowment supplies more than half of Princeton’s operating revenue every year, providing vital support for our teaching and research while also ensuring that Princeton is and remains affordable for students from all socioeconomic backgrounds,” President Christopher L. Eisgruber said.

While the University relies heavily on the endowment — valued at $26.6 billion for fiscal year 2020 — to fund its annual budget and other educational priorities, the endowment cannot be spent however and whenever. 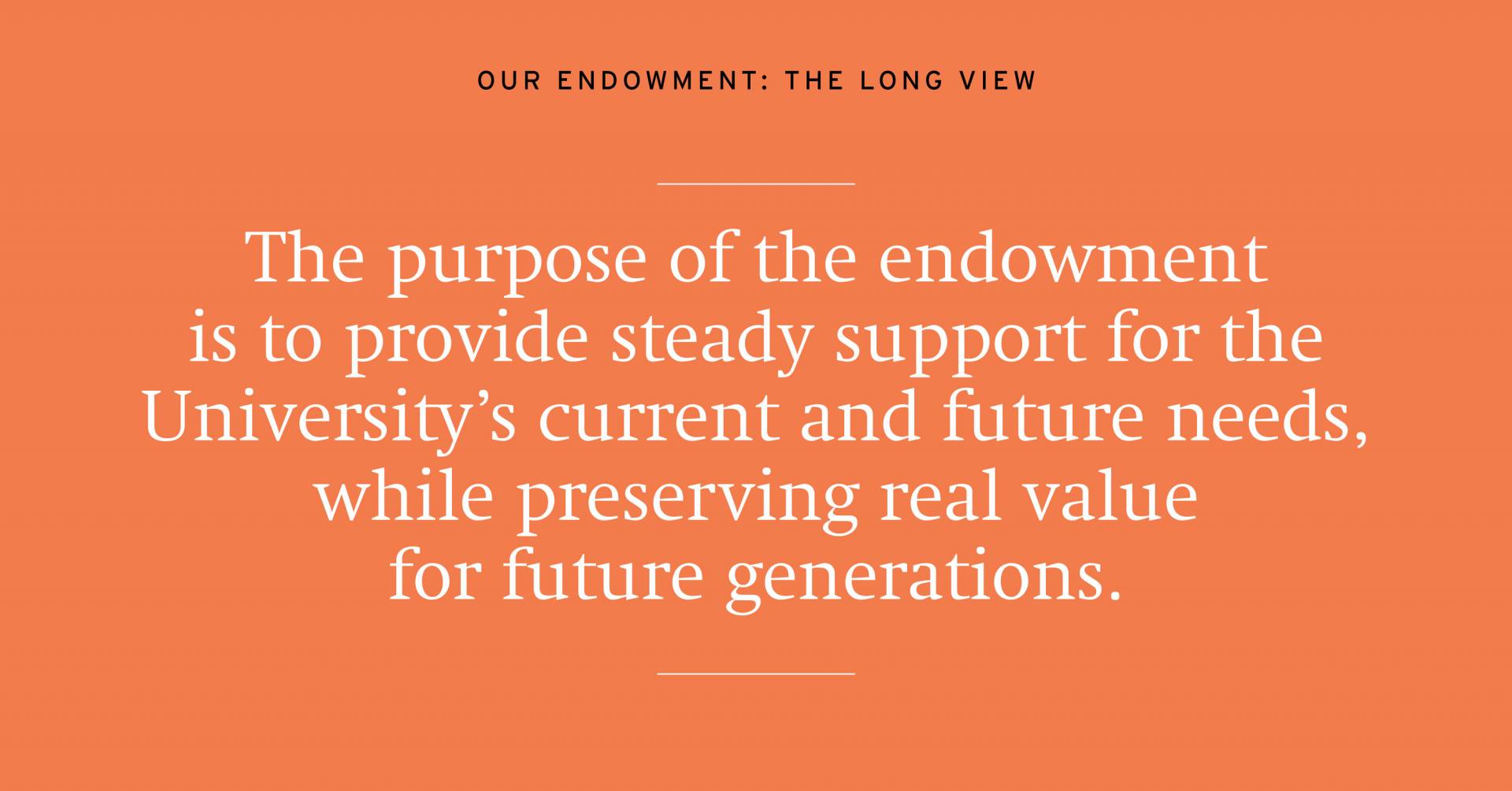 Dispelling myths and misunderstandings about the endowment

Despite the endowment’s importance to almost everything that happens at Princeton, many people have questions about how it works. In order to dispel some myths and misunderstandings surrounding the University’s endowment, and set out some basic facts to understand how the endowment works and came to be in the first place (its origin story), we turned to our experts.

“The endowment is meant to support the University into perpetuity,” said Andy Golden, president of the Princeton University Investment Company (Princo), which was established in 1987 as a University office to manage the endowment.

The purpose of the endowment is to provide steady support for the University’s current and future needs, while preserving real value for future generations.

“We understand the endowment is here to be spent, but we are trying to do it in a way that provides intergenerational equity,” Golden said. “Princeton is an immortal institution, not an individual investor. An individual may invest with the next 20 to 40 years in mind. Princeton has to think about the next 200 to 400 years.”

As Golden put it, “Long term is the mantra”: long-term investments that lead to long-term results that support long-term goals.

“We invest our endowment with an eye toward the long term, and our trustees make decisions about spending from the endowment with the same goal in mind,” Eisgruber said in a 2016 letter to Congress. “Our goal is to maximize our support of this generation of students and faculty, while also ensuring that we can continue to provide appropriate levels of support for far into Princeton’s future.”

Imagine you received an inheritance that was meant to support you and your descendants forever, said Vice President for Finance and Treasurer Jim Matteo.

“Part of your goal in managing that inheritance is to provide for funds to support yourself, while trying to assure the inheritance remains sufficient to meet the needs of future generations,” Matteo said. “That is how Princeton must manage its endowment.”

Like an annuity, an endowment is a long-term resource

An endowment is not a savings account, nor a rainy-day fund. An endowment is more like an annuity, where money is invested with the goal of paying out a steady income stream over a lifetime, or in this case many lifetimes.

Endowment funds often come to the University as charitable donations from generous alumni and other donors.

“Our endowment is known for its size and impact, but it’s grounded by the astounding generosity of our donors. Donors who have committed their personal resources to support the University now and in the future," Matteo said. "These donors desired to create a legacy and wanted that legacy to be in support of the University’s mission.” 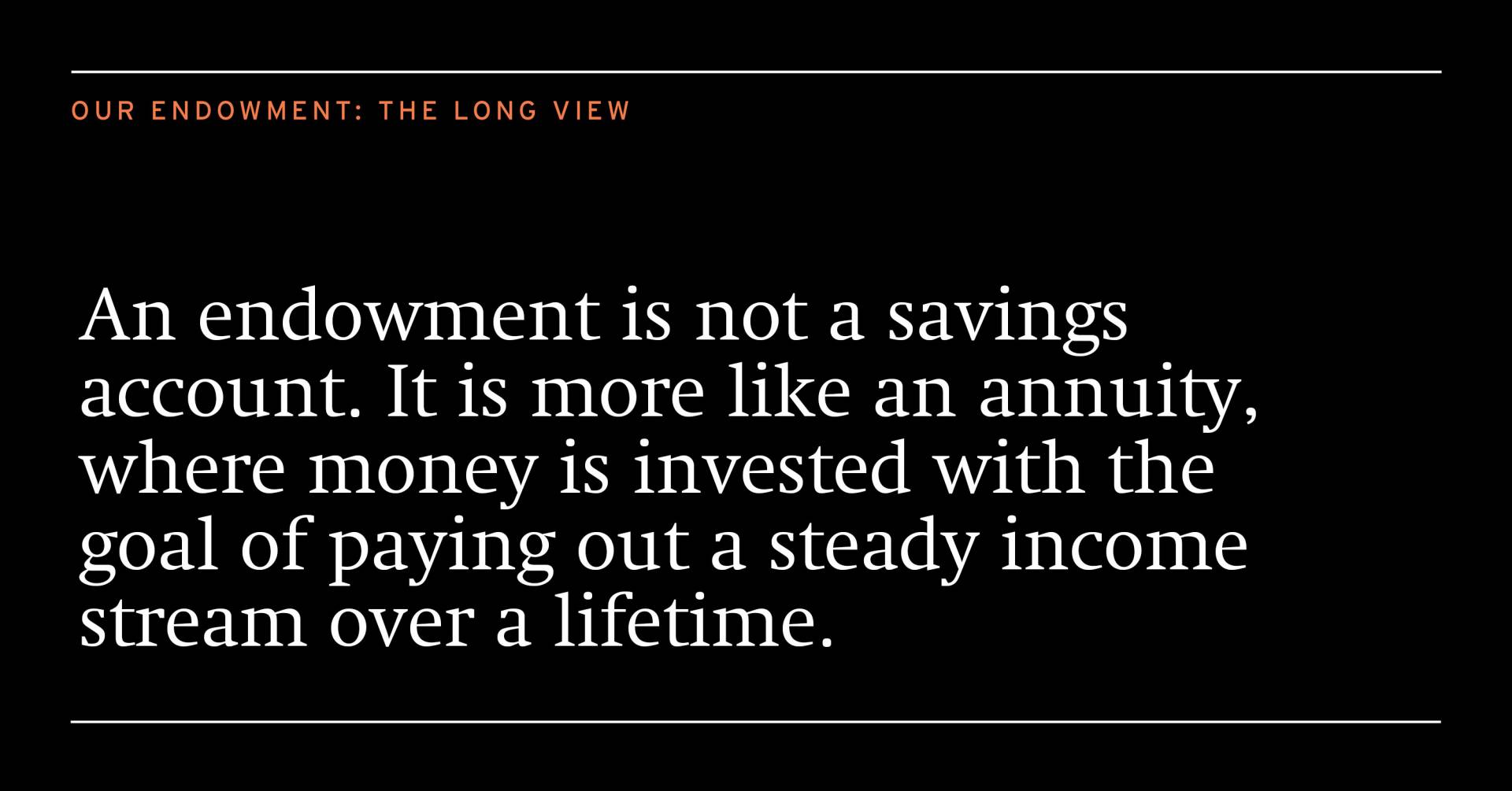 Unlike other kinds of charitable giving, endowment donations are not spent immediately. Instead, endowment funds are invested upon receipt, with only a share available for spending. For example, a $100,000 endowment gift initially would produce about $5,000 in earnings to support the purpose for which it was donated. In contrast to expendable gifts, though, endowment donations continue to produce earnings in perpetuity.

Many endowment funds are restricted, with limitations put in place for the money to serve a specific purpose, such as an undergraduate scholarship or an endowed professorship.

“Some endowment donations come with restrictions on how the earnings on the funds can be used, but all charitable gifts are given with the understanding that they will be used to support the University’s educational mission,” Eisgruber said.

The endowment is essential to teaching, research and operations over the long term

The endowment supports all aspects of teaching, research and campus operations.

“Endowment earnings help build and sustain an excellent faculty and the libraries, laboratories, technological infrastructure, and other resources that faculty and students need to do their work,” Provost Deborah Prentice said. “They fund scholarships, fellowships, and other forms of financial aid that make Princeton affordable for students from all socioeconomic backgrounds; and they allow the University to launch new programmatic and research efforts as important new fields emerge, including, in recent years, such fields as genomics, neuroscience, bioengineering, machine learning and others.”

Because the University relies so heavily on the endowment as a resource for the long term, it must be stewarded responsibly.

“We are spending as much as we can subject to that spending being sustainable,” Golden said.

For fiscal year 2020-21, the operating budget was $2.3 billion, with $1.4 billion coming from the endowment payout. (Other budget funding sources include government research grants, private gifts and funding, tuition and fees, and other income sources).

“Earnings from the endowment are used every year to support essential functions of the University,” Matteo said.

Today, the largest number of endowment funds support financial aid. Endowment funds cover over 80% of the undergraduate financial aid budget, which has supported the University’s efforts to increase the socioeconomic diversity of the student body.

In addition to funding the University’s current educational priorities and daily operations, the endowment is set up to sustain the University for many decades to come, through periods of economic growth as well as through downturns and recessions. The endowment also helps buffer the University from some of the more extreme pressures affecting other higher education institutions. 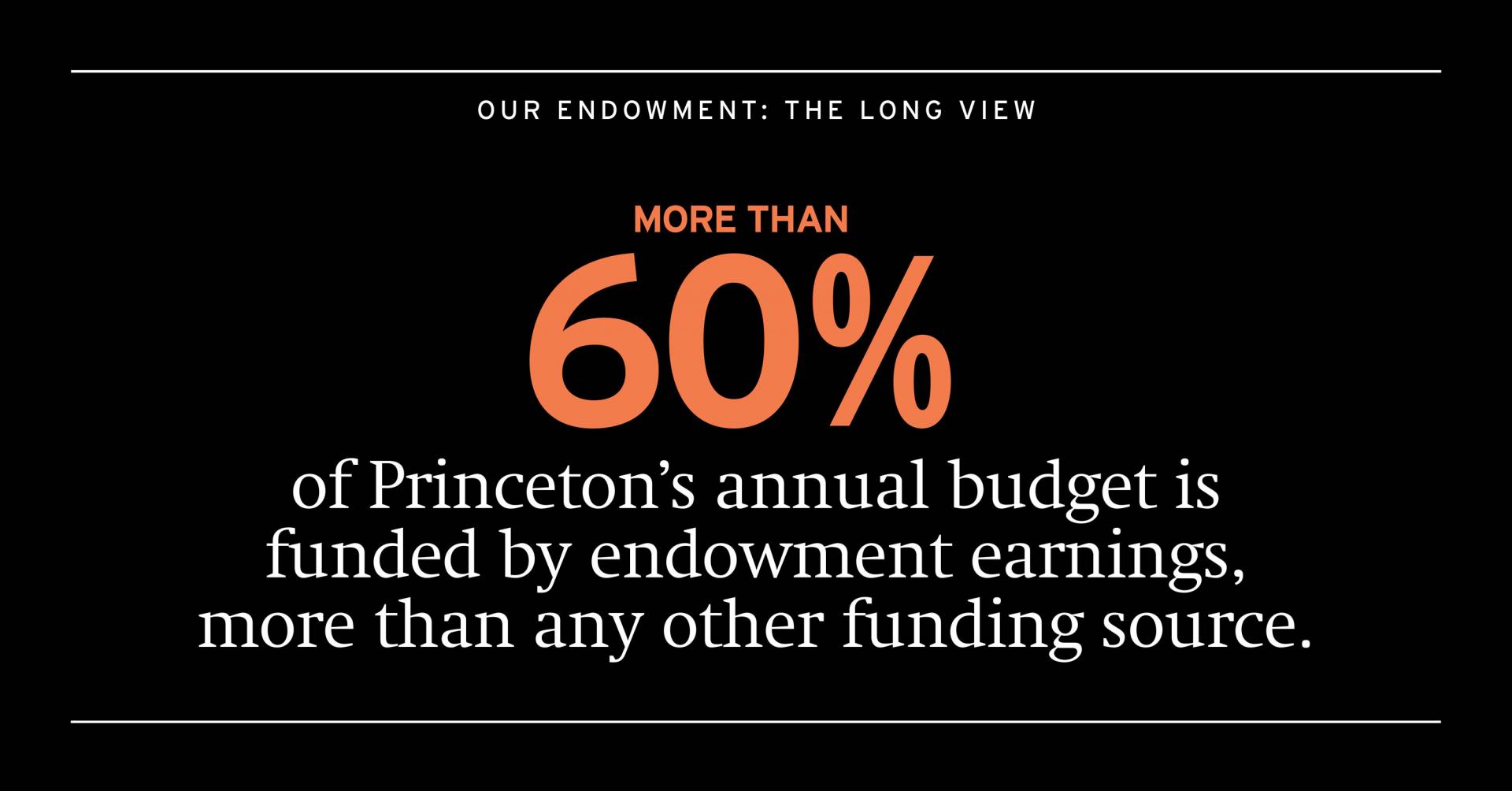 The endowment’s investment goals are about long-term results, not year-to-year

The endowment must be invested to provide a steady stream of income to the University to support current operating costs and high-priority strategic initiatives, while also preserving value for future priorities. This mission requires an expected long-term investment return that exceeds the sum of the University’s annual rate of spending and inflation.

The average annual return on the endowment for the past 10 years is 10.6% and 11.2% for the past 20 years, which places Princeton among the top percentile of 433 institutions listed by the Wilshire Trust Universe Comparison Service.

“Our true measure of success is the long-term. We are focused on our performance over 10 or 20 years, not one year,” Golden said.

He added: “We work hard to find the right balance in our investment policies between risk and return, with the goal of maximizing our support of this generation of students and faculty, while also ensuring that we can continue to provide appropriate levels of support for future generations.”

As detailed by Princo, the endowment’s mission necessitates a high return objective, which is achieved over the long term through an aggressive, equity-biased approach. This means accepting a variability in investment returns from year-to-year.

“We’ve had years above a 10.6% return and we’ve had years below that,” Golden said. “You can’t earn large returns in a guaranteed way year after year. Our framework is designed to deal with that necessary variability in returns. We take an aggressive investment stance to generate sufficient returns over the long term, even if it’s weaker in some years and stronger in others.”

Similarly, the University does not set budget priorities based on one year of investment returns. It sets a spending rate based on endowment performance over long periods of time.

“The University aims to spend more than 5% of the endowment each year, including years when the endowment investment returns are negative,” Eisgruber said. “Put differently, Princeton counts on spending $1.4 billion from its endowment every year. Indeed, we spend at a rate such that, absent growth, the entire endowment would be gone in 20 years.” 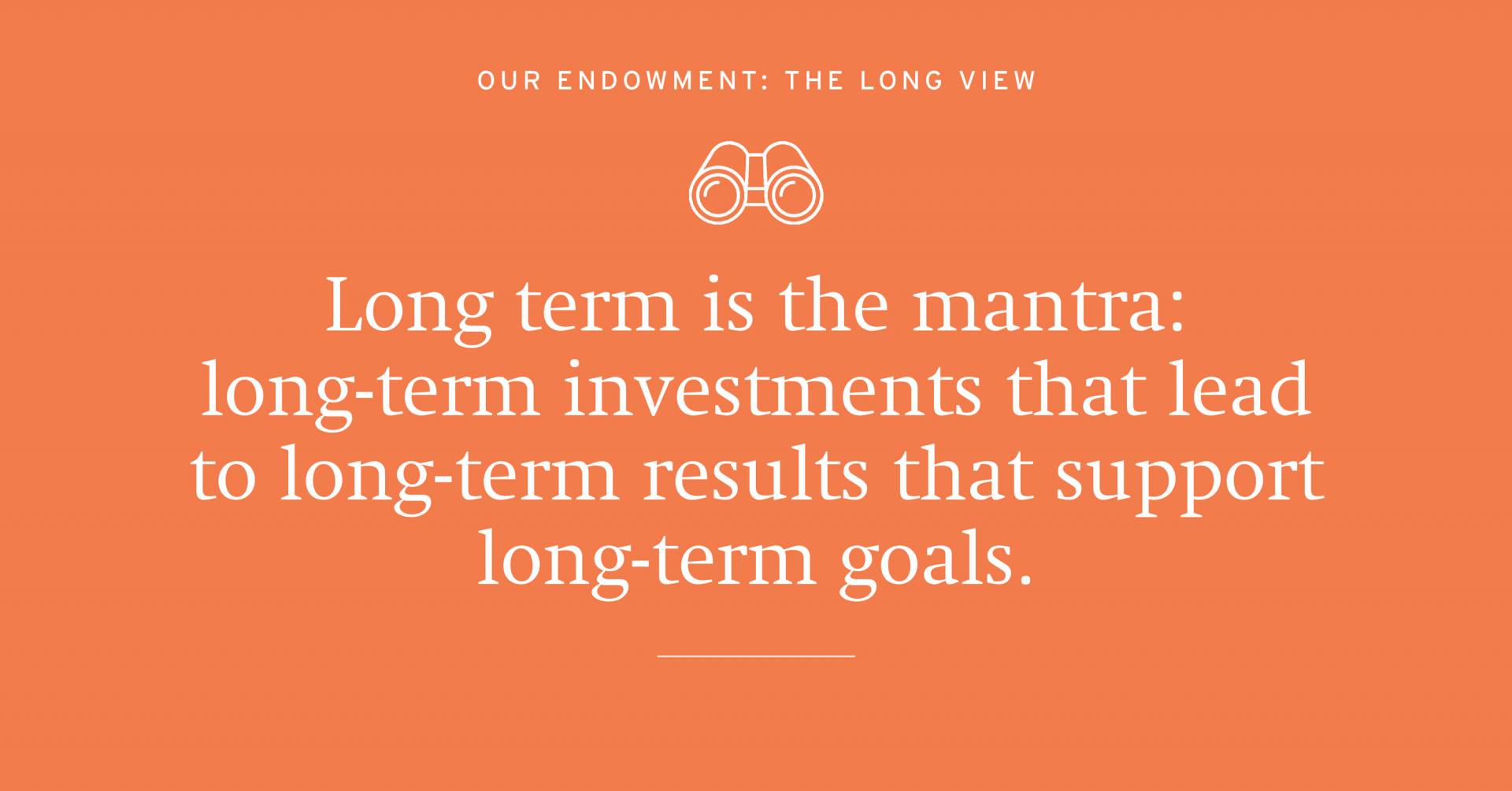 Through strong budget discipline and smart investments, Princeton leaders were able to turn around the deficit, and endowment performance began a decades-long growth trend starting in the early 1980s.

“My predecessors in the 1970s were very smart, volunteer trustees,” Golden said. “They did a great job of managing the investment portfolio, including moving to more aggressive postures despite the economic pain the University had experienced.”

This financial stewardship and budgetary discipline set a strong foundation for the University’s next era.

“If our predecessors reacted to every stress without discipline, then Princeton would be half of what it is today,” Golden said.

He added: “The history has been to focus not just on how much we spend from the endowment, but how well we spend it. You don’t just want to do a bunch of things because you can, you want to do things that matter.” He repeated as examples the University’s no-loan financial aid and growth of cutting-edge fields like neuroscience and computational biology.

Today, Princeton’s endowment is actively managed by Princo. Princo is overseen by its own board of directors and the University president, though it operates under the final authority of the University’s board of trustees.

Golden said the endowment’s enduring mission necessitates a high return objective, which Princo can achieve over the long term only through an aggressive, equity-biased approach.

Princo’s approach is based on partnerships with investment management firms across the world in diverse asset categories, including private equity and real asset investments in private companies, venture capital and real estate.

“We delegate to the world’s leading experts within any investment niche to do that frontline decision-making,” Golden explained.

In recent years, Princo has undertaken a number of steps to improve diversity within the investment world through partnerships with new firms. Over past three years, Princo hired 10 U.S.-based investments managers, of which seven, representing about two-thirds of assets deployed with new relationships, had substantially diverse ownership and leadership. For four of those firms, representing more than 40% of assets deployed with new relationships, African-Americans represent at least half of the firm’s leadership.

“As with everything, we are focused on the long-term,” Golden said. “We want to build long-term relationships with new investment managers and have them focus on long-term results. “If you look at the seeds we’ve sowed over the last three years, we envision partnerships with these new firms that will reap results for Princeton and for them over this decade and for decades after that.”

Next up: A history of impact

Our next story on the endowment looks at the direct impacts that endowment funding has had at Princeton and on the greater public good, from undergraduate scholarships to Nobel Prize-winning research. 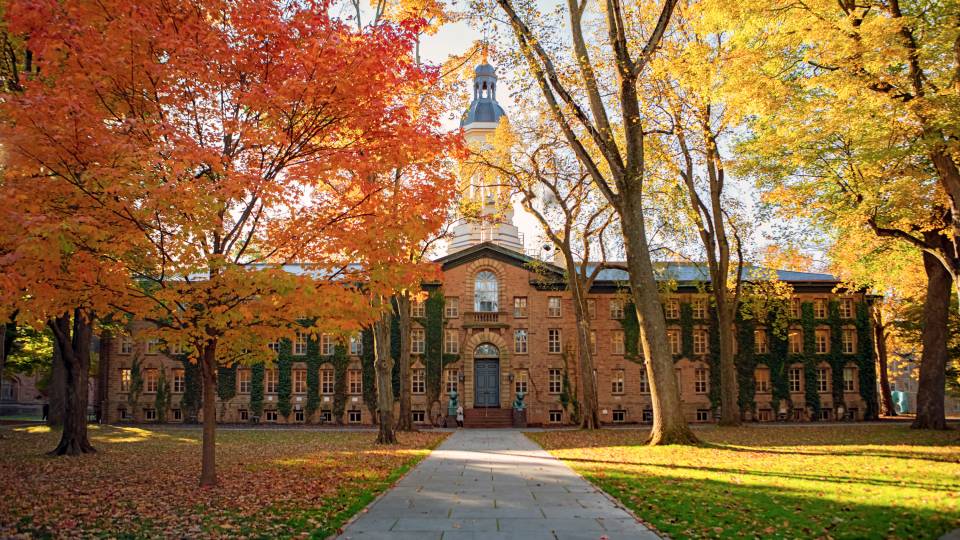 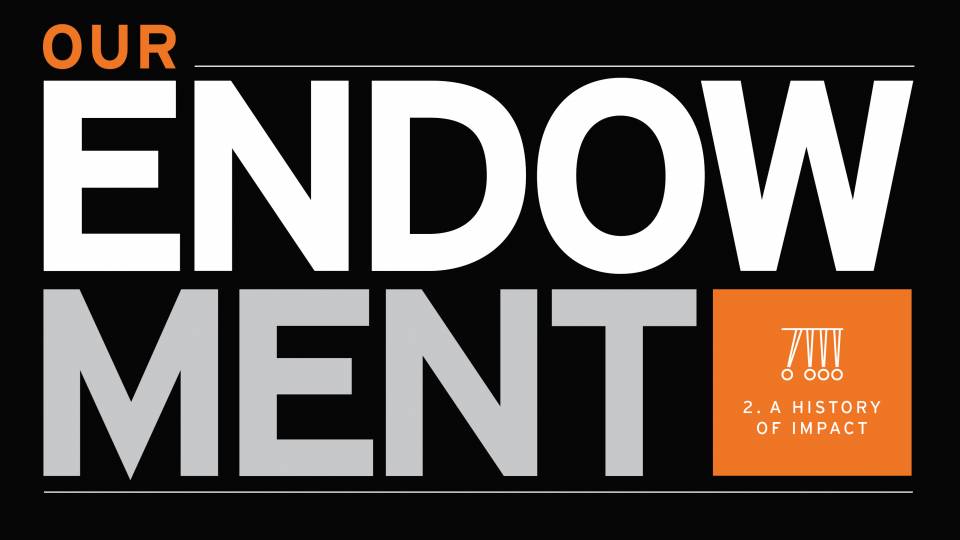