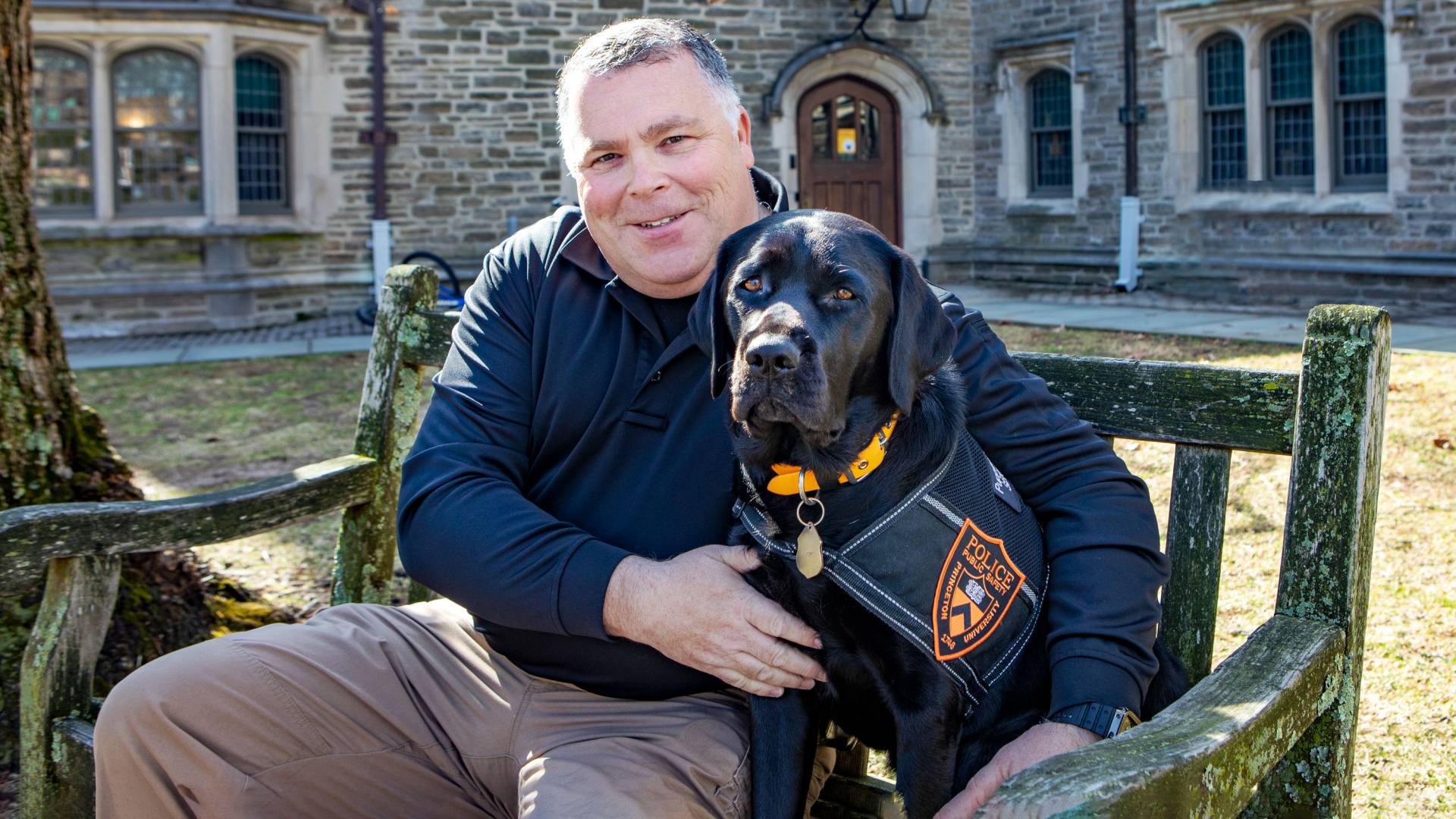 Coach, a 2-year-old black Labrador retriever, with her handler and caretaker Sgt. Alvan Flanders of the Department of Public Safety. Coach is trained to provide comfort and care. She is not a police canine.

Princeton may be known as the Tigers, but it’s a dog who is warming hearts on campus. 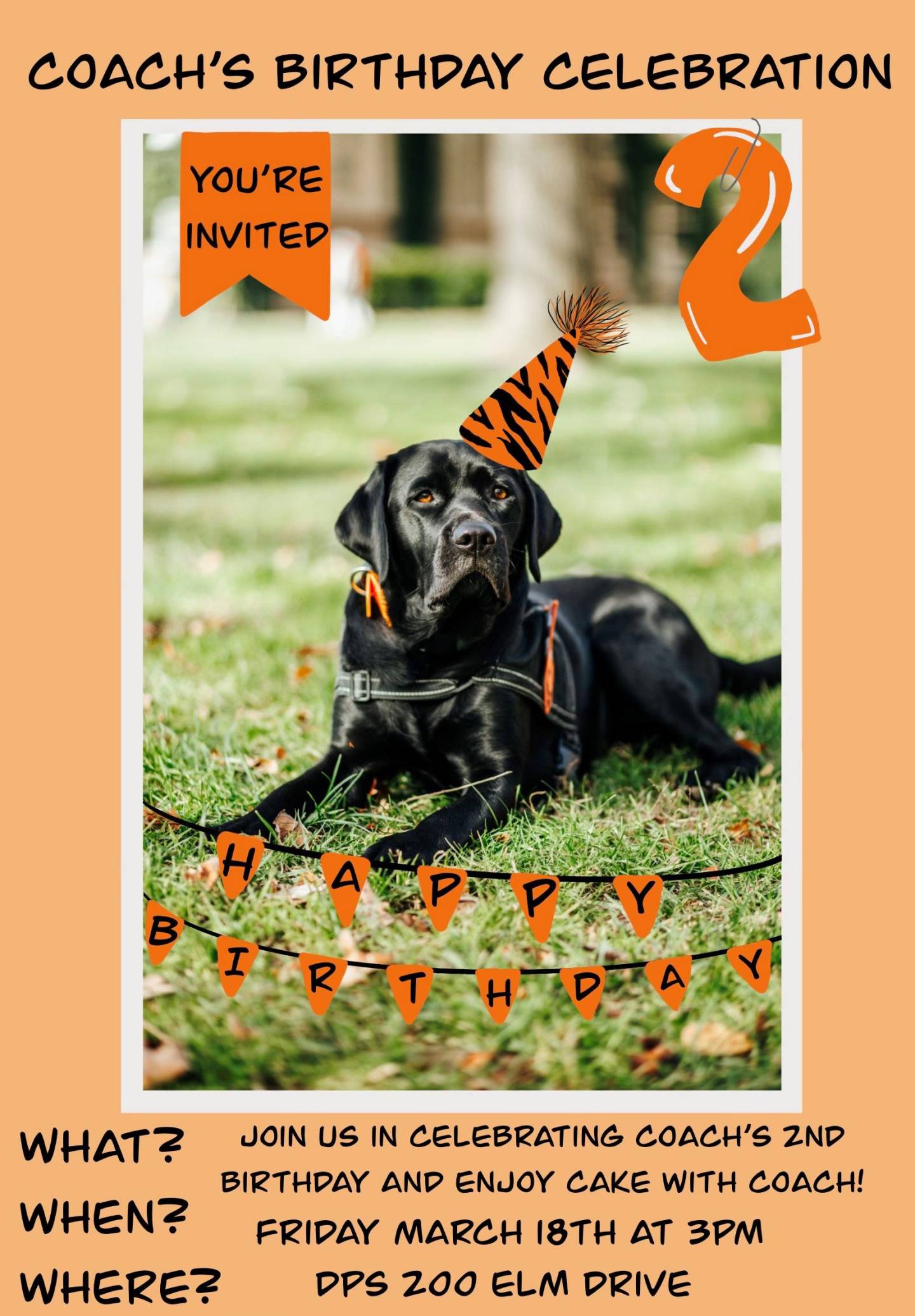 The Department of Public Safety invites the campus community to Coach's birthday celebration at 3 p.m. March 18 at 200 Elm Drive. Humans and dogs are both welcome.

Coach, a female black Labrador retriever, is specially trained to provide comfort and care. She is a member of the Department of Public Safety (DPS), which makes Princeton among a small group of colleges and universities with a full-time therapy dog.

“Coach’s only job is to make people feel better,” said her handler and caretaker Sgt. Alvan Flanders. “And she’s great at it. Everywhere we go, people stop her for a pet, belly rub, hug or handshake. She’s the friendliest dog.”

Coach arrived on campus last August and is already a perfect Princetonian. She’s black and orange (if you count her collar). She’s intelligent (she graduated early from puppy training). And she loves ivy (“Her favorite thing is to roll around in the patches around campus,” Flanders said).

Coach turned 2 on March 11 and DPS will host a birthday party at 3 p.m. Friday, March 18, at 200 Elm Drive. Humans and dogs are welcome, though the event is BYOB (bring your own bone).

Flanders emphasizes that Coach is a highly trained dog who supports Public Safety’s community caretaking mission. She is not a police canine, and she does not sniff for drugs nor explosives. She can, however, perform countless tricks, from saluting and high-fiving to taking a bow and playing peek-a-boo.

“Coach is calm and approachable. People should feel comfortable coming up to Coach wherever they see her,” Flanders said. “Princeton students work so hard and have so much stuff going on; just the dog’s presence can make them feel better.”

Flanders has observed this “Coach effect” countless times. “A student came up to me during move-in and said, ‘You just made my day! I’ve really been missing my dog back home.’” 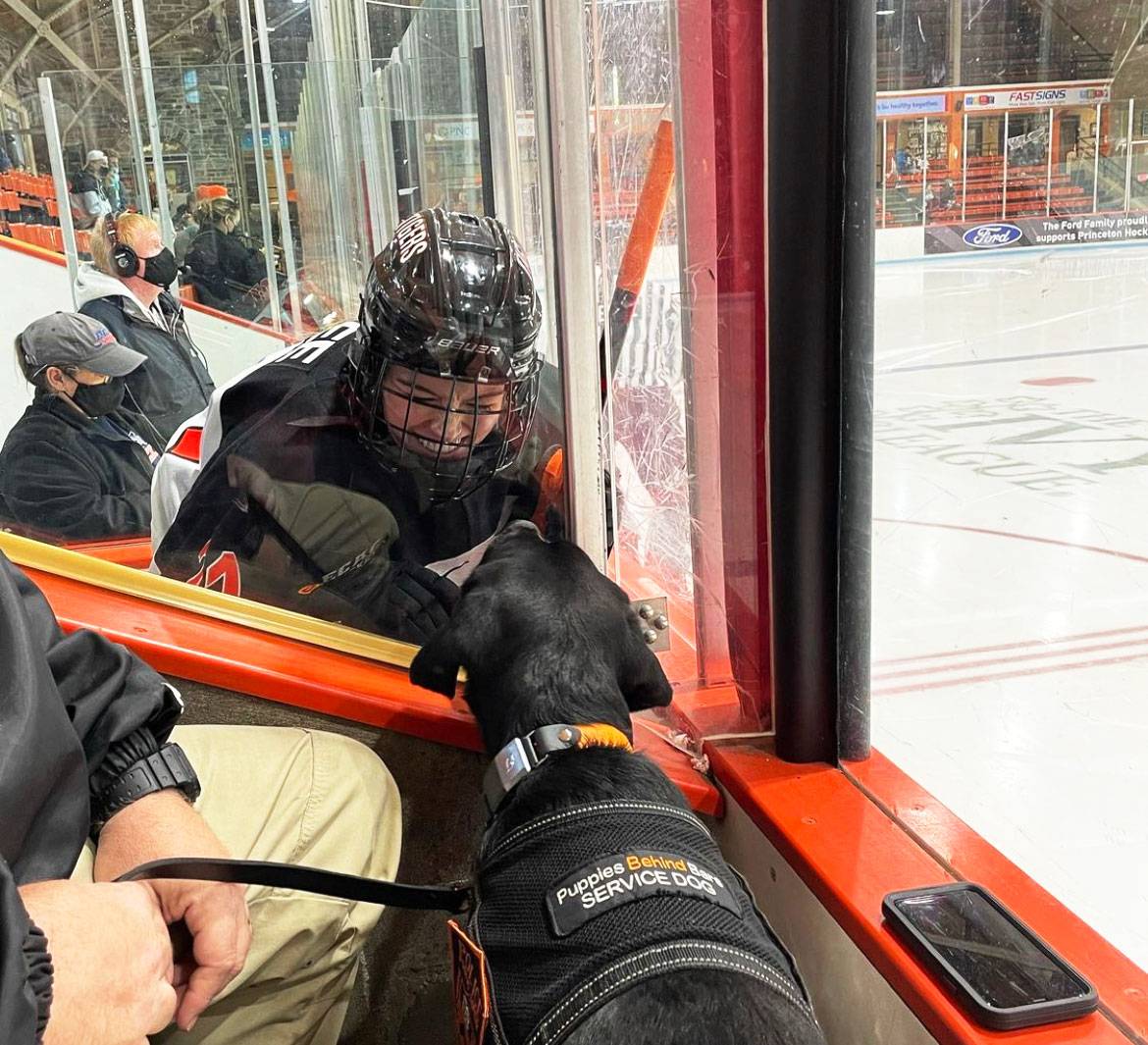 Coach helped boost the spirits of players on the women's ice hockey team this winter. The dog is often seen at athletic events, residential college study breaks and Frist Campus Center. Students joke that Coach is a campus celebrity.

“Seeing Coach randomly on campus throughout my week provides a little happiness in a stressful environment,” Kuehl said. “Back home in Minnesota, I have a chocolate lab and a black lab. I had been missing my family and thought bringing Coach to [Baker Rink] would be fun. My teammates loved seeing Coach, and it provided them happiness and comfort to see her wagging tail in the stands. Even when we get a penalty, you can't help but smile once you see Coach right next to you.”

“Usually if someone sees a Public Safety officer walking through their building, they will assume something is wrong,” he said. “Now, when I take my daily walks with Coach, people come up and start asking questions about her. Coach helps spark conversation and connection.”

One evening last semester, Flanders received a call from University Health Services asking if Coach could make an impromptu visit to the Infirmary. Nurse Jennifer Conover thought Coach could help a student who was tearful and anxious.

“The student had come in to speak to a counselor,” Conover said. “She was overwhelmed with school and personal issues, and had been struggling. Coach went right over to the student and laid down next to her while she was talking with Sgt. Flanders. I could tell Coach had an instant calming presence, the student’s face lit up when she got there.”

Conover said dogs like Coach can be a great resource on college campuses.

“I am a dog lover and before coming to Princeton, I was a pediatric nurse and had experience with therapy dogs in that setting,” Conover sad. “The stress on these students is immense. We want to make the Infirmary a safe space where students know they will be taken care of, and Coach is a great resource. She instinctively knows how to cheer people up and is such a calm, sweet little girl! We are also appreciative of Sgt. Flanders. It is obvious how much he truly cares about the students.”

In addition to her daily walks around campus, Coach is a regular at residential college study breaks, Frist Campus Center and athletic events. Coach is approved to go inside University buildings, and student groups, academic departments and administrative offices can arrange for a visit by emailing dpscoach@princeton.edu

Junior Beatrix Bondor joked that Coach is a campus celebrity. She even had Coach surprise her boyfriend during a birthday picnic on campus.

“Coach has a very expressive face with her large chocolate-brown eyes and raised eyebrows,” Bondor said. “Her Instagram account [@CoachAtPrinceton] is a real source of joy for my boyfriend, Connor, and me. We loved reading about Coach's adventures and seeing her posts.” 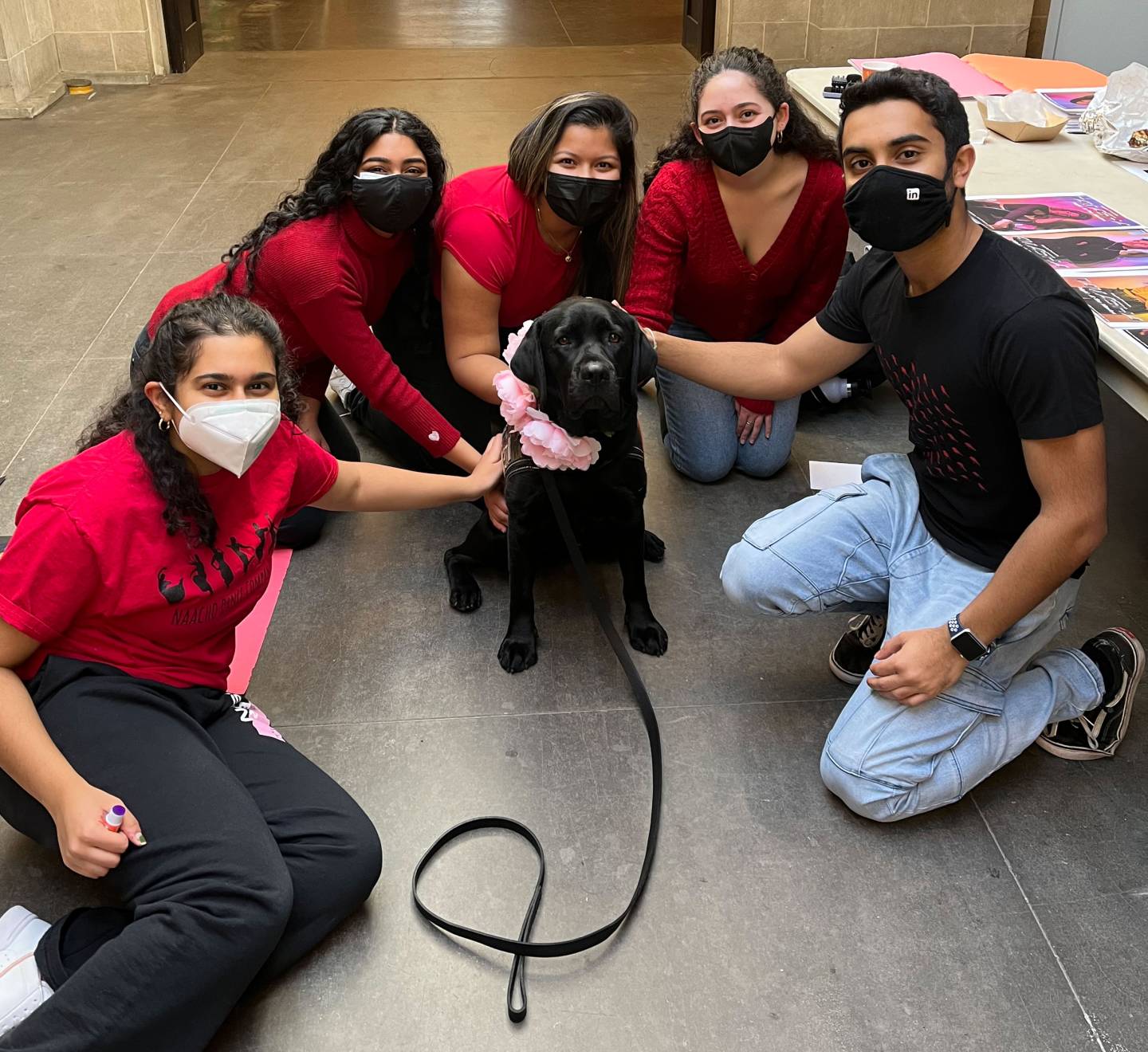 Coach poses with students from the South Asian dance troupe Naacho. “Coach is calm and approachable. People should feel comfortable coming up to Coach wherever they see her,” Flanders said.

Coach came to Princeton from Puppies Behind Bars, a nonprofit organization that works with people in prison to train service dogs for wounded war veterans and first responders. Established in 1997, the organization only recently started working with public safety departments at universities.

“Our dogs are bred and trained to be super friendly, to go up to people and elicit smiles,” said Gloria Gilbert Stoga, president and founder of Puppies Behind Bars. “Our dogs have over 10,000 hours of socialization by time they leave here. In the case of Coach, we could see she was Miss Personality. She is very comfortable in crowds and around young, college-aged people.”

Flanders spent two weeks last summer learning from the dog trainers at Bedford Hills Correctional Facility for Women in Westchester County, New York. At the end of the session, he was matched to be Coach’s “forever caretaker.” (When not working at DPS, Coach lives with Flanders and his family.)

Gilbert Stoga said the training process itself helps break down barriers. “We have police officers learning from and working hand-in-hand with people in prison,” she said. “The two groups may have preconceived notions about each other. The groups see each other in a different light through the dogs.”

Note: Dogs are not generally permitted inside undergraduate dormitories. Students seeking to have an assistance animal because of a documented disability may make a request for Special Needs Housing to the Office of the Dean of Undergraduate Students (Graduate School for grad students) and the Office of Disability Services. Requests are considered on a case-by-case basis and more information may be found on the Housing website.