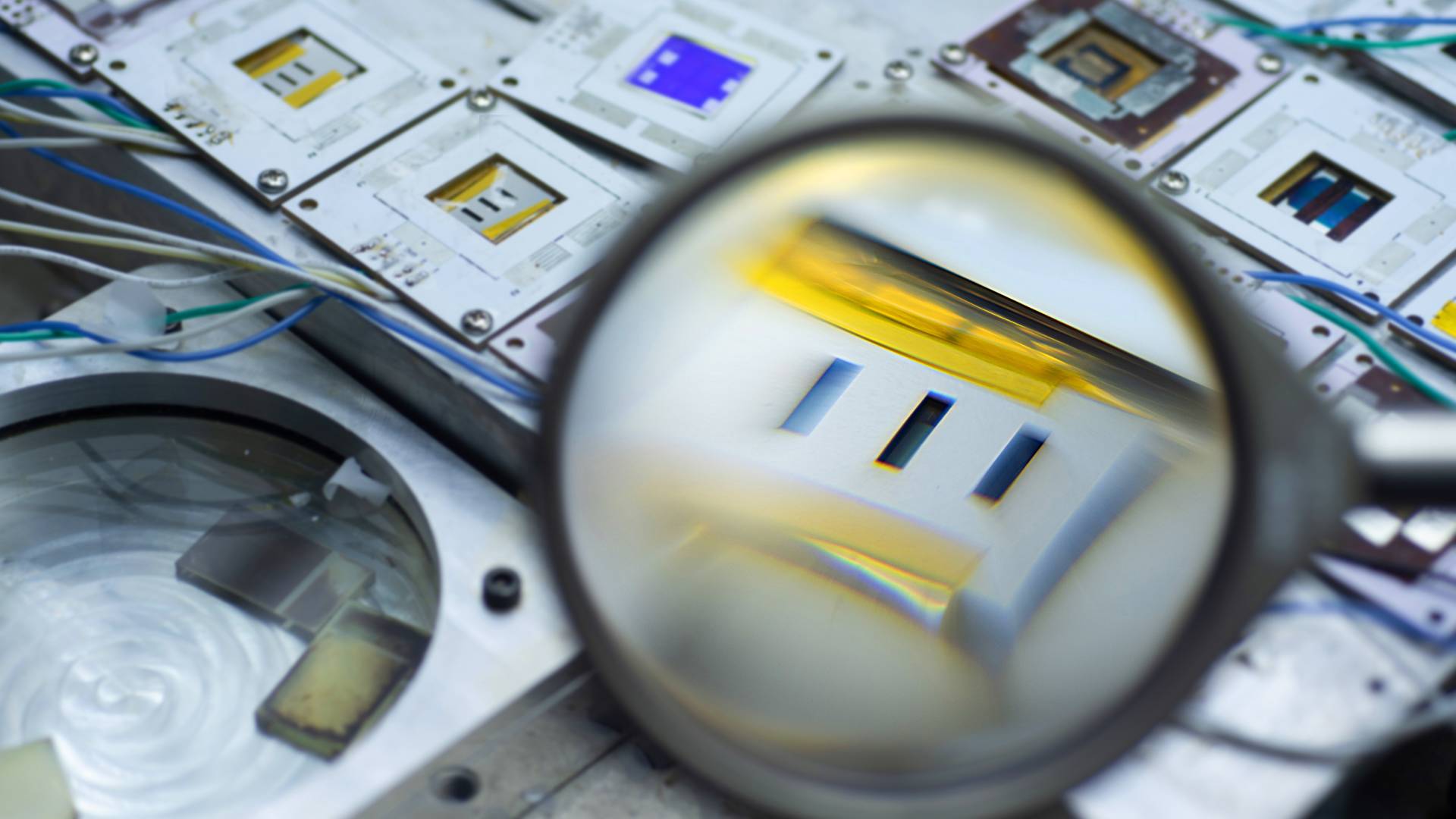 Once seen as fleeting, a new solar tech proves its lasting power

An emerging class of solar energy technology, made with perovskite semiconductors, has passed the long-sought milestone of a 30-year lifetime. The Princeton Engineering researchers who designed the new device also revealed a new method for testing long-term performance, a key hurdle on the road to commercialization.

The device is the first of its kind to rival the performance of silicon-based cells, which have dominated the market since their introduction in 1954. The Princeton team projects that their device can perform above industry standards for around 30 years, far more than the 20 years used as a threshold for solar cells.

Perovskites are semiconductors with a special crystal structure that makes them well suited for solar cell technology. They can be manufactured at room temperature, using much less energy than silicon, making them cheaper and more sustainable to produce. And whereas silicon is stiff and opaque, perovskites can be made flexible and transparent, extending solar power well beyond the iconic panels that populate hillsides and rooftops across America.

But unlike silicon, perovskites are notoriously fragile. Early perovskite solar cells (PSC), created between 2009 and 2012, lasted only minutes. The projected lifetime of the new device represents a five-fold increase over the previous record, set by a lower efficiency PSC in 2017. (That device operated under continuous illumination at room temperature for one year. The new device would operate for five years under similar lab conditions.)

The Princeton team, led by Lynn Loo, the Theodora D. '78 and William H. Walton III '74 Professor in Engineering, revealed their new device and their new method for testing such devices in a paper published June 16 in Science. 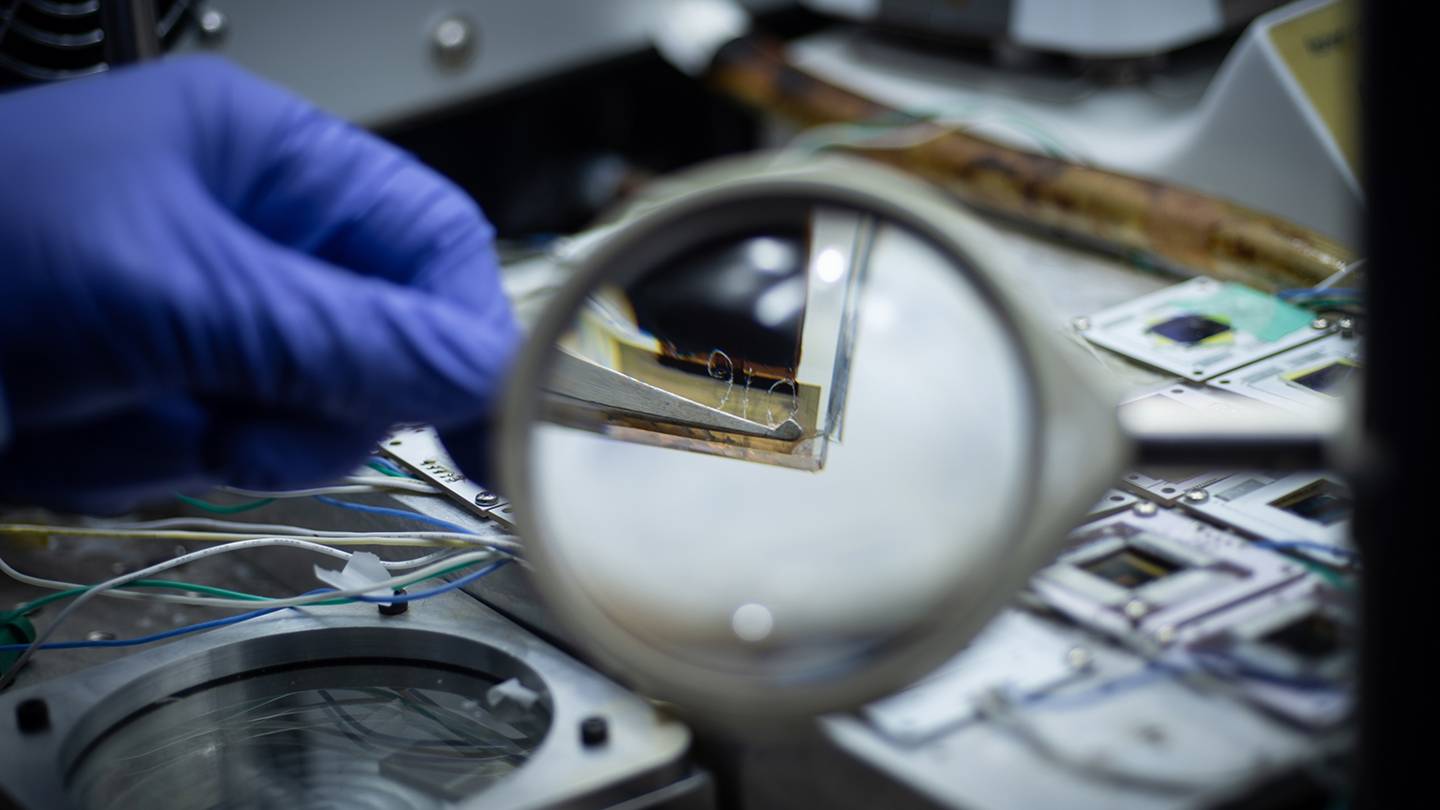 Looking at a highly stable perovskite solar cell under magnification during an accelerated aging process that helps researchers forecast the extended lifetimes of advanced designs.

Loo said the record-setting design has highlighted the durable potential of PSCs, especially as a way to push solar cell technology beyond the limits of silicon. But she also pointed past the headline result to her team’s new accelerated aging technique as the work’s deeper significance.

“We might have the record today,” she said, “but someone else is going to come along with a better record tomorrow. The really exciting thing is that we now have a way to test these devices and know how they will perform in the long term.”

Due to perovskites’ well-known frailty, long-term testing hasn’t been much of a concern until now. But as the devices get better and last longer, testing one design against another will become crucial in rolling out durable, consumer-friendly technologies.

“This paper is likely going to be a prototype for anyone looking to analyze performance at the intersection of efficiency and stability,” said Joseph Berry, a senior fellow at the National Renewable Energy Laboratory who specializes in the physics of solar cells and who was not involved in this study. “By producing a prototype to study stability, and showing what can be extrapolated [through accelerated testing], it’s doing the work everyone wants to see before we start field testing at scale. It allows you to project in a way that’s really impressive.”

While efficiency has accelerated at a remarkable pace over the past decade, Berry said, the stability of these devices has improved more slowly. For them to become widespread and rolled out by industry, testing will need to become more sophisticated. That’s where Loo’s accelerated aging process comes in.

“These kinds of tests are going to be increasingly important,” Loo said. “You can make the most efficient solar cells, but it won’t matter if they aren’t stable.”

How they got here

Early in 2020, Loo’s team was working on various device architectures that would maintain relatively strong efficiency — converting enough sunlight to electric power to make them valuable — and survive the onslaught of heat, light and humidity that bombard a solar cell during its lifetime. 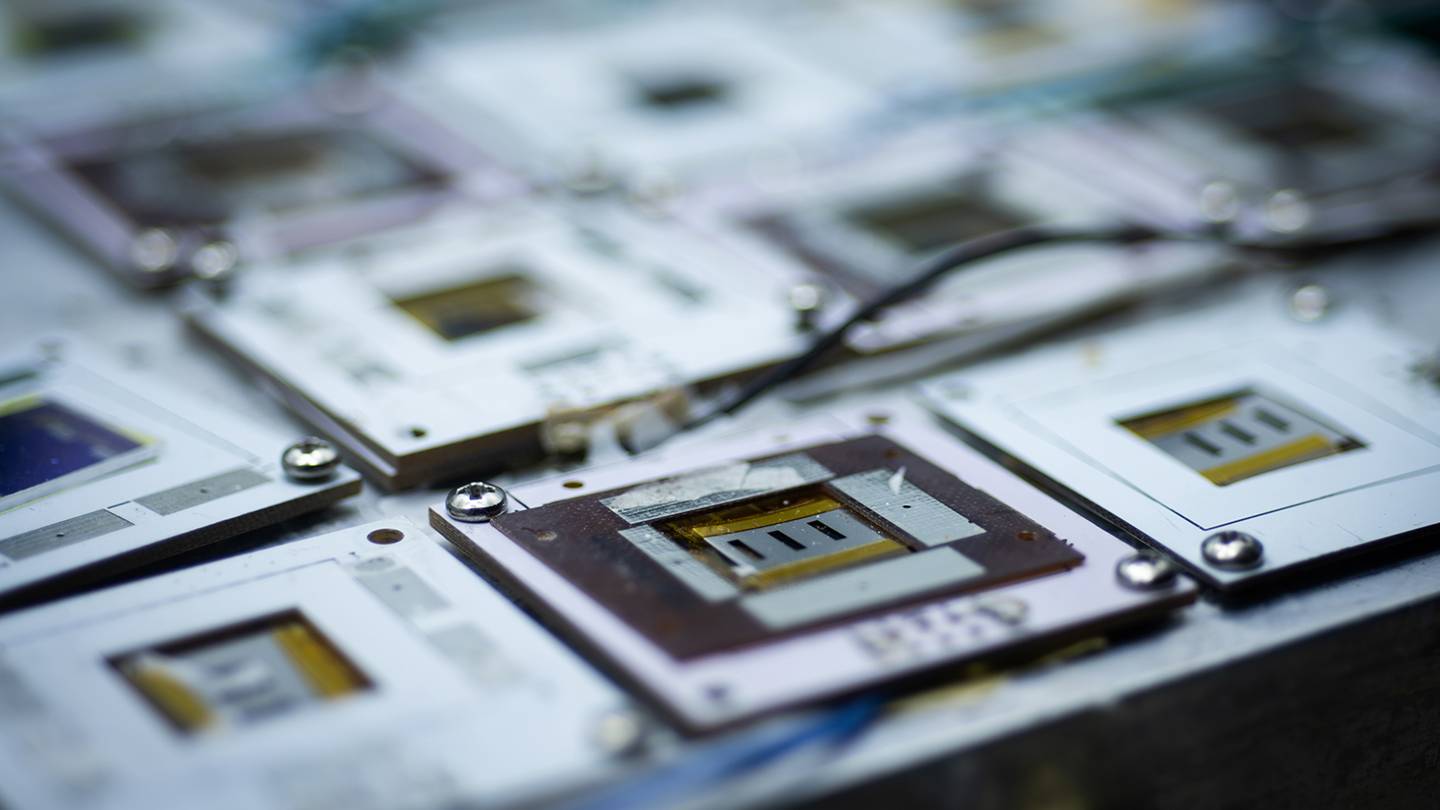 An array of perovskite solar cell designs sit under bright light at high temperatures during an accelerated aging and testing process developed by Princeton Engineering researchers. The new testing approach marks a major step toward the commercialization of advanced solar cells.

Xiaoming Zhao, a postdoctoral researcher in Loo’s lab in the Andlinger Center for Energy and the Environment, had been working on a number of designs with colleagues. The efforts layered different materials in order to optimize light absorption while protecting the most fragile areas from exposure. They developed an ultra-thin capping layer between two crucial components: the absorbing perovskite layer and a charge-carrying layer made from cupric salt and other substances. The goal was to keep the perovskite semiconductor from burning out in a matter of weeks or months, the norm at that time.

It’s hard to comprehend how thin this capping layer is. Scientists use the term 2D to describe it, meaning two dimensions, as in something that has no thickness at all. In reality, it’s merely a few atoms thick — more than a million times smaller than the smallest thing a human eye can see. While the idea of a 2D capping layer isn’t new, it is still considered a promising, emerging technique. Scientists at NREL have shown that 2D layers can greatly improve long-haul performance, but no one had developed a device that pushed perovskites anywhere close to the commercial threshold of a 20-year lifetime.

Zhao and his colleagues went through scores of permutations of these designs, shifting minute details in the geometry, varying the number of layers, and trying out dozens of material combinations. Each design went into the light box, where they could irradiate the sensitive devices in relentless bright light and measure their drop in performance over time.

In the fall of that year, as the first wave of the pandemic subsided and researchers returned to their labs to tend to their experiments in carefully coordinated shifts, Zhao noticed something odd in the data. One set of the devices still seemed to be operating near its peak efficiency. 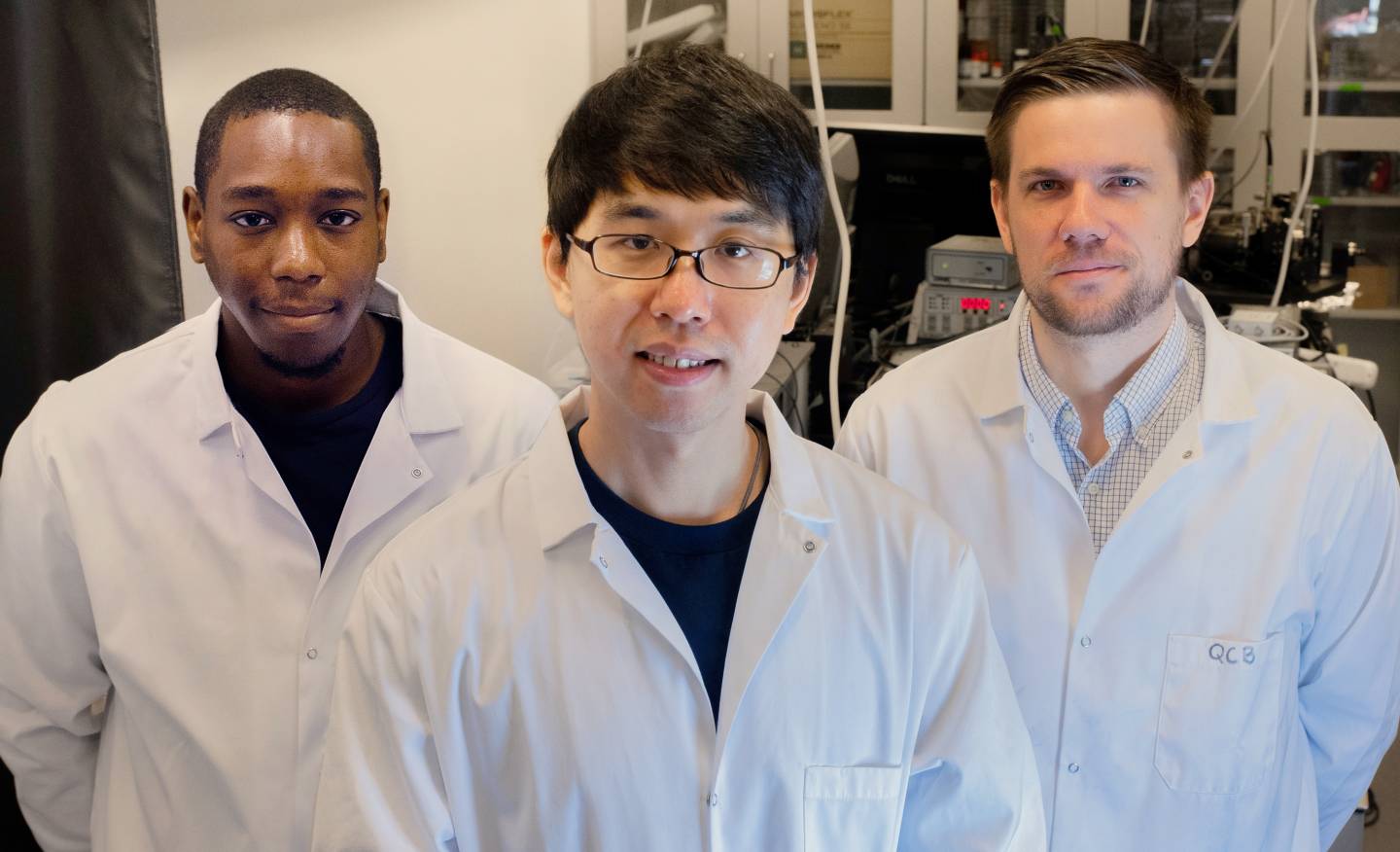 “There was basically zero drop after nearly half a year,” he said.

That’s when he realized he needed a way to stress test his device faster than his real-time experiment allowed.

“The lifetime we want is about 30 years, but you can’t take 30 years to test your device,” Zhao said. “So we need some way to predict this lifetime within a reasonable timeframe. That’s why this accelerated aging is very important.”

The new testing method speeds up the aging process by illuminating the device while blasting it with heat. This process speeds up what would happen naturally over years of regular exposure. The researchers chose four aging temperatures and measured results across these four different data streams, from the baseline temperature of a typical summer day to an extreme of 230 degrees Fahrenheit, higher than the boiling point of water.

They then extrapolated from the combined data and forecast the device’s performance at room temperature over tens of thousands of hours of continuous illumination. The results showed a device that would perform above 80 percent of its peak efficiency under continuous illumination for at least five years at an average temperature of 95 degrees Fahrenheit. Using standard conversion metrics, Loo said that’s the lab equivalent of 30 years of outdoor operation in an area like Princeton, NJ.

Berry of NREL concurred. “It’s very credible,” he said. “Some people are still going to want to see it play out. But this is much more credible science than a lot of other attempts at forecasting.”

The Michael Jordan of solar cells

Perovskite solar cells were pioneered in 2006, with the first published devices following in 2009. Some of the earliest devices lasted only seconds. Others minutes. In the 2010s the device lifetimes grew to days and weeks and finally months. Then in 2017, a group from Switzerland published a groundbreaking paper on a PSC that lasted for one full year of continuous illumination.

Meanwhile, the efficiency of these devices has skyrocketed over the same period. While the first PSC showed a power-conversion efficiency of less than 4 percent, researchers boosted that metric nearly tenfold in as many years. It was the fastest improvement scientists had seen in any class of renewable-energy technology to date. 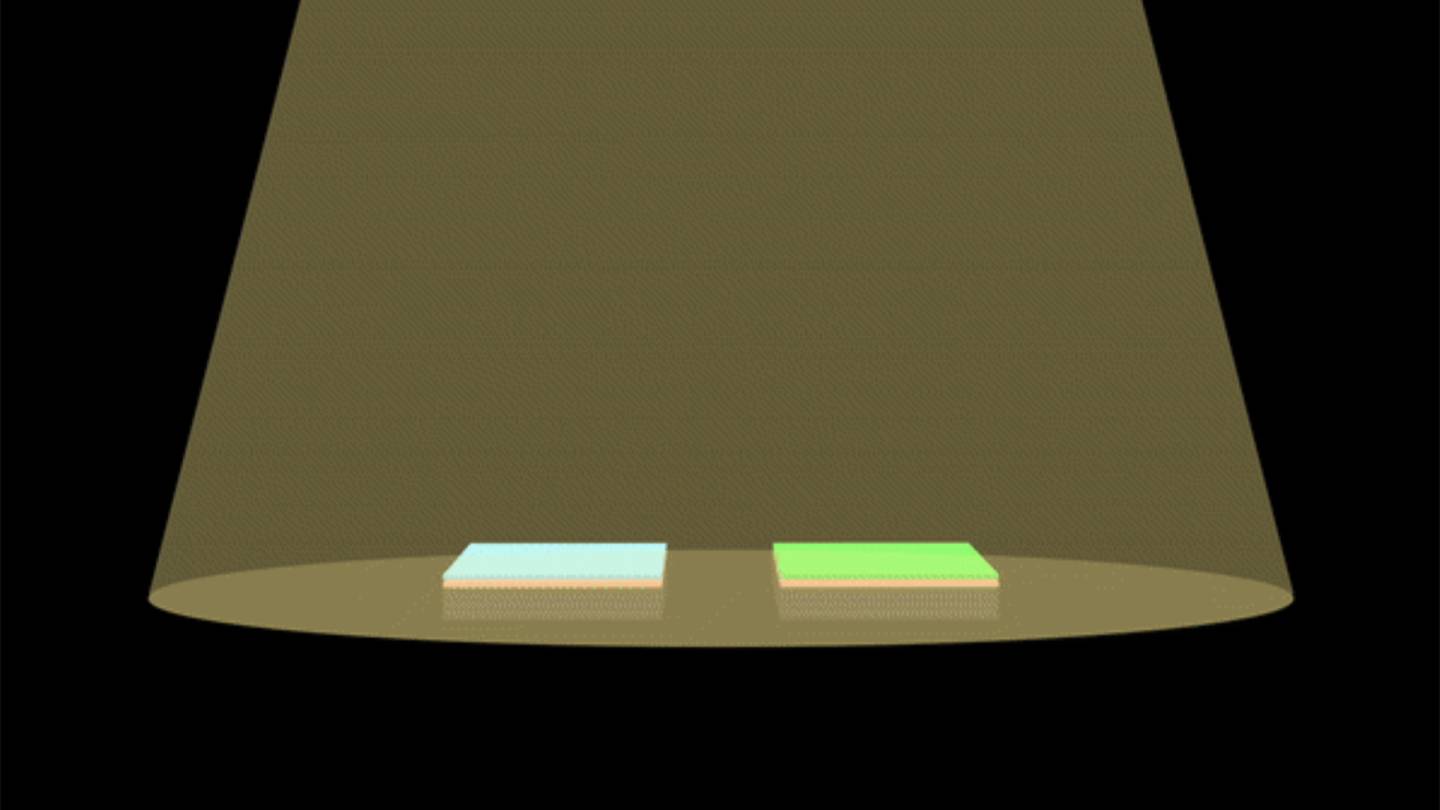 The researchers built their perovskite-based device out of layers that perform different tasks, including an innovative ultra-thin layer that protects the most sensitive elements. They then illuminated the device under bright light and blasted it with extreme heat to understand how it would perform over tens of thousands of hours of exposure. The result was a record-setting device and a groundbreaking aging and testing method.

So why the push for perovskites? Berry said a combination of recent advances make them uniquely desirable: newly high efficiencies, an extraordinary “tunability” that allows scientists to make highly specific applications, the ability to manufacture them locally with low energy inputs, and now a credible forecast of extended life coupled with a sophisticated aging process to test a wide array of designs.

Loo said it’s not that PSCs will replace silicon devices so much that the new technology will complement the old, making solar panels even cheaper, more efficient and more durable than they are now, and expanding solar energy into untold new areas of modern life. For example, her group recently demonstrated a completely transparent perovskite film (having different chemistry) that can turn windows into energy producing devices without changing their appearance. Other groups have found ways to print photovoltaic inks using perovskites, allowing formfactors scientists are only now dreaming up.

But the main advantage in the long run, according to both Berry and Loo: Perovskites can be manufactured at room temperature, whereas silicon is forged at around 3000 degrees Fahrenheit. That energy has to come from somewhere, and at the moment that means burning a lot of fossil fuels.

Berry added this: Because scientists can tune perovskite properties easily and broadly, they allow disparate platforms to work smoothly together. That could be key in wedding silicon with emerging platforms such as thin-film and organic photovoltaics, which have also made great progress in recent years.

“It’s sort of like Michael Jordan on the basketball court,” he said. “Great on its own, but it also makes all the other players better.”

The paper "Accelerated aging of all-inorganic, interface-stabilized perovskite solar cells" was published with support from the National Science Foundation; the U.S. Department of Energy, via Brookhaven National Laboratory; the Swedish Government Strategic Research Area in Materials Science on Functional Materials; and the Princeton Imaging and Analysis Center. In addition to Loo and Zhao, contributing authors include Tianjun Liu and Feng Gao, both from Linköping University; and Tianran Liu, Quinn C. Burlingame, Rudolph Holley III, Guangming Cheng and Nan Yao, all from Princeton University.