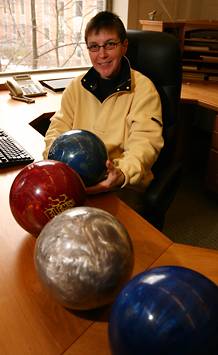 Chemical engineering professor Kyle Vanderlick sees her field as a crossroads for countless topics — from bowling to biology.

When she joined a South Philadelphia bowling league 14 years ago, Princeton chemical engineer Kyle Vanderlick was just looking for a way to unwind.

She was an assistant professor at the University of Pennsylvania at the time, starting a career that would make her one of the world’s foremost experts on atomic-scale interactions that govern friction and adhesion between two surfaces. She had enjoyed bowling as a child and appreciated the change of pace and culture that the bowling alley afforded after a day in the lab.

Now, having held the highest league average (185) for a woman for the last eight years, Vanderlick is at the top of her game in her pastime as well as her work. What she did not expect was that she would begin to find deep connections between the two.

“No one appreciates all the physics and chemistry involved in bowling,” Vanderlick said. In fact, the key to high-level bowling is making strategic use of a thin film of oil that is spread on the lanes to make the ball slip and catch at certain points along the alley so it steers into the pins at a precise angle. In other words, friction, adhesion and surface interactions are the name of the game.

“It has a lot to do with my area of research,” said Vanderlick, who is convinced that her scientific expertise has given her an edge in her game.

A Porsche comes into play

The intersection of bowling and chemical engineering may seem a stretch, but Vanderlick sees her field as a crossroads for countless areas of everyday life, from medicine to telecommunications to the environment. “Chemical engineering is a very versatile discipline,” she said. “We span from molecules to global-scale processes.”

Vanderlick’s own research exemplifies the far-reaching nature of the field. She spends part of her time studying the physical and chemical properties of cell membranes, which could yield new contraceptives or antibiotic drugs. Another part of her work concerns the surface properties of various synthetic materials, which could lead to more reliable microscopic switches for use in high-speed computer networks.

Appointed chair of chemical engineering in 2004, Vanderlick is working to strengthen the department’s connections to other disciplines, such as genomics and electronics, while using the field’s versatility as a selling point to attract undergraduate and graduate students.

Part of Vanderlick’s motivation to increase people’s awareness of chemical engineering stems from her own entry into the field, which she traces to a particular day at her small Massachusetts high school. She recalls a guidance counselor pulling her out of gym class to speak to a woman representing Worcester Polytechnic Institute. “The only thing I remember about my conversation with this woman was she said, ‘I am a chemical engineer; I work for Avon in New York; and I drive a Porsche.’ I went home that night and proudly confessed to my parents that I had found my lifelong calling and that I wanted to be a chemical engineer. I had no idea what it was. I think it was the Porsche that got me.”

That experience points to a challenge for her department, said Vanderlick. Students choose chemical engineering because they like chemistry, physics and math — which are the interests that sustained Vanderlick through a bachelor’s degree at Rensselaer Polytechnic Institute and a doctorate at the University of Minnesota — but they do not have a clear sense of what the field is about. Defining chemical engineering was easier 50 years ago when the field was more focused on industrial chemical production, with gasoline as the iconic product, Vanderlick said.

“Now it’s more difficult for us to articulate a cohesive, well-rounded view of what chemical engineering is and what it can do for a young person,” she said. “Our challenge as educators is to infuse this information into the curriculum and give students plenty of examples.”

Killing bugs ‘below the belt’

Some of those examples could come from Vanderlick’s own research. Before coming to Princeton in 1998, Vanderlick began collaborating with a biochemist at Penn, who was looking for chemicals that damage the outer membrane of sperm cells, but not other cells, with the idea of developing improved contraceptives.

“What attracted me is that this is purely a problem of physical chemistry,” Vanderlick said. Her job was to understand chemical reactions that changed the mechanical properties of the thin film cell membrane, which did not require a detailed knowledge of biology.

She has since expanded the work to include a more biological approach, looking at protein fragments that damage cell membranes. Humans and animals naturally secrete these “antimicrobial peptides” as a first line of defense, and Vanderlick is collaborating with a biologist at the University of California-Irvine to understand exactly how they work. They believe that the information eventually could lead to better antibiotics or antimicrobial coatings.

One benefit of the approach Vanderlick and her colleagues are taking is that it is unlikely to trigger antibiotic resistance. This can occur when a drug disrupts signals or other biological processes within a bacterium, and then the cell finds another way to survive. “When you attack bacteria in a more sophisticated way, they fight back in a more sophisticated way,” she said. “But once you poke a hole in the membrane or disturb it to some great extent, well, it’s just a real below-the-belt way to kill a bug.”

For Andre Ouellette, her collaborator in California, Vanderlick’s work adds quantitative rigor to the task of figuring out how these chemicals work. “For us, it’s a great collaboration,” said Ouellette. “She has great expertise and really knows how to interpret the data.” Part of Vanderlick’s contribution has been to develop a simplified synthetic version of a cell membrane, which serves as a model for testing and teasing out the differences between antimicrobial substances.

At the other end of research spectrum, Vanderlick is the co-leader of a major effort to study the precise molecular interactions that determine whether two materials stick to one another, particularly when the objects involved are microscopic in size. The project, which she co-leads with David Srolovitz, chair of mechanical and aerospace engineering, includes eight faculty members in four departments and many graduate students and postdoctoral researchers and is funded through a large grant from the National Science Foundation.

An example of this work is a microscopic switch in which a tiny beam bends and makes contact with a surface, allowing electrical current to flow through. Such devices are increasingly important in routing data through telecommunications systems. “What happens in practice is that this switch will work flawlessly for a billion times and then suddenly on the billionth and first contact, it sticks and now the device fails,” said Vanderlick. “We’re interested in the scientific questions behind devices like this and other devices where the touching of materials is concerned.”

Srolovitz said Vanderlick has made a major contribution by harnessing a variety of techniques for measuring the physical forces between two objects when the gap between them is only a few atoms in size. The work is particularly challenging because interactions can become unstable at such small scales; for example, the two objects might crash together when they become very close. Vanderlick’s research “gives us the ability to go in and look very carefully at what happens at these scales,” Srolovitz said. “It’s quite nice work.”

In addition to her responsibilities as lab leader and department chair, Vanderlick is a devoted teacher. In 2002, she was awarded a President’s Award for Distinguished Teaching. Last year she began teaching the introductory materials science course, which is the core course among several departments for anyone pursuing a materials science certificate. “Kyle is a great teacher,” said Srolovitz, who coaxed her to take on the course. “I really considered it a coup to get her to do that.”

So far Vanderlick has not used the physics and chemistry of bowling as an example in class. But she is eager to introduce students to wide-ranging ways in which chemical engineering and materials science affect their lives; several years ago, Vanderlick taught a freshman seminar on “The Engineering of Ice Cream.”

Catherine Stoia Parker, a 2000 graduate, said that Vanderlick’s attention to real-world examples was a vital part of the fluid dynamics course she took as a junior. “I thought she did a fabulous job,” said Parker. “It was very mathematical and there were a lot of equations, but she gave us a real physical intuition of what those equations meant.”

Parker then worked in Vanderlick’s lab researching her senior thesis and said Vanderlick became a mentor in many areas of her life. Parker, who also earned a certificate in dance, credited Vanderlick with supporting her diversity of interests. Vanderlick came to Parker’s performances and later offered support, advice and letters of recommendation when Parker went on to earn a master’s degree in chemical engineering and then switched to medical school.

“She was always supportive of outside fields,” said Parker. “She has really promoted the interdisciplinary vision at Princeton.”