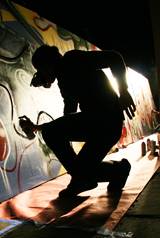 Yatika Fields (above) and Rose Simpson started off the night of art and pop culture with an original larger-than-life graffiti work.

Below left: Fields and Simpson put the finishing touches on their creation.

Wilcox Hall in Princeton's Wilson College was filled with the sights and sounds of graffiti, music, poetry and skateboarding on Friday, April 8.

Artist Douglas Miles, the founder of Apache Skateboards, was joined by a group of young Native American artists and performers known as the Native Agent Arts Collective on an installation and performance piece, "POP LIFE 2."

The project included the painting of six canvasses, each 5 feet by 6 feet, that were connected for the performance, giving the impression of a 36-foot-long work of art. Also during the event, the performers read poems, played music and demonstrated skateboard art and technique.

The Native Agent Arts Collective is made up of poets, DJs, skaters and graffiti artists/painters from various North American tribes, such as the Osage, Apache, Pueblo, Kiowa, Navajo, Akimel O'Otham and Seminole.

Two members of the collective worked on the canvasses. Rose Simpson, an artist, poet and singer from the Santa Clara Pueblo tribe in New Mexico, painted female faces decorated with stylized native motifs. At the other end of the canvasses, Yatika Fields, an artist originally from Oklahoma now living in New York, painted a collage of a cityscape. 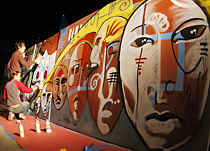 The paintings now will be hung in the commons area of Wilcox Hall for others to enjoy.

The events were sponsored by Wilson College.