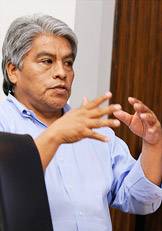 The students from the Santa Fe Indian School Leadership Program's 2008 Summer Policy Academy represented all 19 New Mexico tribes and pueblos. They were nominated to participate in the June 23-27 program by teachers, community leaders, professionals and tribal leaders.

"The Woodrow Wilson School hosted the Summer Policy Academy to promote the participants' higher education aspirations, particularly in public policy and international affairs," said Jose Ochoa, associate director of graduate admissions in the Wilson School. "There is an opportunity gap in the number of Native American students pursuing graduate degrees and careers in public policy and international affairs. We believe that their exposure to public policy practitioners and academics at Princeton expanded their horizons regarding future educational opportunities through the Woodrow Wilson School's Junior Summer Institute and graduate programs." 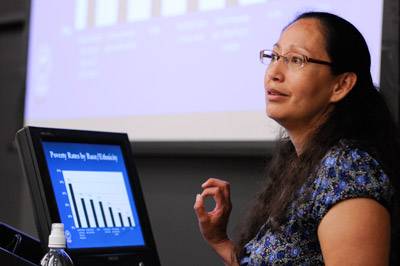 Jackie Old Coyote, director of education and outreach at the Harvard Project on American Indian Economic Development, was among the speakers during the program at the Wilson School.

"The Summer Policy Academy was conceived for the purpose of exposing young people to the challenges and issues in tribal communities," said Regis Pecos, a 1977 Princeton alumnus who is director of the leadership program and chief of staff for New Mexico's House Speaker Ben Lujan, the sponsor of the academy. "It also focuses on federal policies and the way in which federal policies impact Indian people and tribal communities."

The day before their Washington presentations, students broke up into groups and held "mock" policy briefings. Each panel addressed a particular issue central to the Native American community: the preservation of the Native American language, water rights and health care.

In calling for funding for maintaining their native language, students emphasized the importance of Native American dialects for current and future generations. The panel underscored the need for the U.S. government to make a commitment to educational programs that retain the Native American oral tradition, noting that indigenous people currently are struggling to preserve their native language.

The panel presenting their case for enhanced water rights highlighted the economic, cultural and environmental significance of water to native people, and the need to empower their communities with water sovereignty and sustainable water resources. Students placed significant emphasis the critical role water plays in the sacred traditions of Native American people. 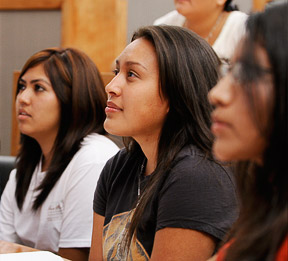 The final group addressed health care issues. Students underscored what they believe to be "a lack of political will" on the part of the U.S. government regarding Native Americans, pointing out that while the state of New Mexico has a number state-of-the-art medical facilities that treat both mental health and physical ailments, no such facility exists for the state's indigenous population -- especially for the treatment of alcoholism and diabetes, illnesses they argued the U.S. government has been aware of for several generations.

Participants were actively engaged in the discussions and exhibited a sense of urgency with each of the policy issues. "It really gives us a chance to learn more about the Native American policy structures and to be able to speak and share with our own tribes," said student Corey Douma from the Laguna Pueblo.

Santa Ana/Navajo native Janice Garcia said the leadership program was an "awesome" experience. "I enjoy this program because it opens my mind to new things, and you meet terrific people. It benefits our future and the future of our native people."