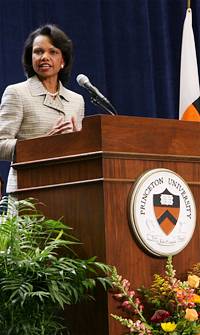 U.S. Secretary of State Condoleezza Rice's address at Princeton University focused on the U.S. war in Iraq and efforts to promote democracy in the Middle East. Rice delivered the keynote address to open a year of celebrations marking the 75th anniversary of the Woodrow Wilson School of Public and International Affairs. 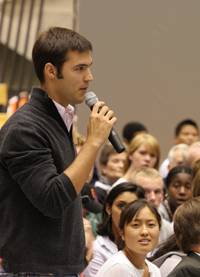 Below left: Anne-Marie Slaughter, dean of the Woodrow Wilson School, introduces Rice, as the secretary of state and Princeton President Shirley M. Tilghman (left) look on.

U.S. Secretary of State Condoleezza Rice offered a resolute defense of the U.S. war in Iraq during a Sept. 30 address at Princeton University, and evoked memories of the once-unimaginable fall of communism in projecting a future of peace and democracy in the Middle East.

Rice delivered the keynote address marking the beginning of a year of celebrations for the 75th anniversary of Princeton's Woodrow Wilson School of Public and International Affairs. In her remarks to some 3,500 students, faculty, staff and guests of the University in Jadwin Gymnasium, Rice affirmed the Bush administration's commitment to the war in Iraq in the face of insurgency in that country and political opposition in the United States.

"If we quit now, we will abandon Iraq's democrats at their time of greatest need," she said. "We will embolden every enemy of liberty and democracy across the Middle East. We will destroy any chance that the people of this region have of building a future of hope and opportunity. And we will make America more vulnerable.

Acknowledging that the vision of a peaceful, democratic Middle East "can seem very distant at times," Rice maintained that "we must recognize, as we do in every other region of the world, that liberty and democracy are the only guarantees of true stability and lasting security.

"There are those who worry that greater freedom of choice in the Middle East will only liberate and empower extremism. In fact, the opposite is true: A political culture of transparency and openness is not one in which extremist beliefs can ultimately thrive," she said.

Rice cited varying levels of democratic reforms in Afghanistan, Lebanon, Palestine, Egypt and Saudi Arabia as evidence that the Middle East is moving toward a more politically open future.

"We have set out to help the people of the Middle East transform their societies. Now is not the time to falter or fade," she said. "Only four years ago, the democrats of the Arab world were hiding in silence, or languishing in prison, or fearing for their very lives. Now, from Cairo and Ramallah to Beirut and Baghdad, men and women are finding new spaces of freedom to assemble and debate and build a better world for themselves and for their children.

"They most certainly have determined enemies. But they also have determined defenders. And it is possible to envision a future Middle East where democracy is thriving, where human rights are secure, and where hope and opportunity are within the reach of these people." 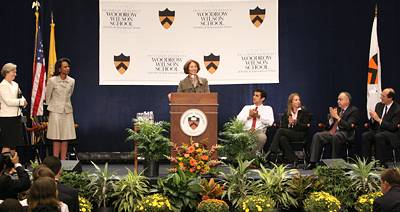 In drawing a parallel between the strife in the Middle East today and the spread of communism in the decades after World War II, Rice stressed that adherence to democratic ideals could bring about seemingly unimaginable change. "Indeed, it must have seemed quite impossible that we would one day stand at a juncture where Eastern Europe would be liberated, Russia would emerge, and Europe would be whole and free and at peace," she said.

Rice emphasized the lessons she learned from the work of U.S. statesmen such as George Marshall, Dean Acheson and Arthur Vandenberg. "If we think back on those days, we recognize that extraordinary times are turbulent and they are hard. And it is very often hard to see a clear path," she said. "But if you are -- as those great architects of the post-Cold War victory were -- … true to your values, if you are certain of your values, and if you act upon them with confidence and with strength, it is possible to have an outcome where democracy spreads and peace and liberty reign.

"Because of the work that they did, it is hard to imagine war in Europe again. So it shall be also for the Middle East," she said.

Prior to her address, Rice engaged in a roundtable discussion with Wilson School students and alumni. Following her lecture, she took questions from the audience on topics including Hamas, Latin America and the structure of Iraq's government. Students and other attendees said they appreciated the opportunity to hear the secretary of state in person, even if some oppose the Bush administration's positions.

"I liked the speech," said sophomore Aaron Spolin. "She had a coherent point of view. Although I'm a Democrat and I disagree with her, I think she genuinely believes what she's doing will promote democracy."

"She argued very convincingly," added junior Emily Stolzenberg. "It's a very ideological administration, and it's impossible to tell what the course of one action will be. We'll only be able to look back years from now and see whether it's worked."

"It was an excellent address," said Wilson School lecturer Frederick Hitz. "She showed terrific command of all the subjects. … She got very good questions, and I think she had a chance to show a little bit of the vision of the administration in foreign policy."

In her introduction to Rice's address, Wilson School Dean Anne-Marie Slaughter noted that Woodrow Wilson viewed America as "a great ideal, a great body of principles," and that Rice has performed well "in service to that ideal."

"When Secretary Rice represents us around the world, as she has done tirelessly since taking office in January, she brings extraordinary intelligence, accomplishment, discipline and drive to the job," Slaughter said. "She reflects an America in which things once thought impossible have become possible."

The school was founded in 1930 as a small, interdisciplinary program at the undergraduate level, with a graduate professional program added in 1948. "It is fitting that since 1948 the school has carried the name of Woodrow Wilson, the 13th president of Princeton and the 28th president of the United States. It was Wilson who exhorted all graduates of Princeton to serve our nation, and it was Wilson who later exhorted the nation to engage the world," Tilghman said.

Rice, a former provost of Stanford University, lauded the work of the Wilson School and the many Princeton alumni who have served at the highest levels of U.S. government.

"From George Kennan and John Foster Dulles to George Shultz and James Baker and, of course, Woodrow Wilson, many renowned American statesmen have worn the orange and black …" she said, referring to Princeton's colors. "As a professor myself, I understand how important it is to root the practice of statecraft in the study of statecraft, in the systematic examination of politics and history and culture that the Wilson School offers to its students."

To continue the Wilson School anniversary kickoff, Lt. Gen. David Petraeus, a Princeton alumnus who has been in charge of the Multi-National Security Transition Command in Iraq, and Michael Chertoff, secretary of the U.S. Department of Homeland Security, will speak on Saturday, Oct. 1. A schedule of other events is available on the Wilson School's 75th anniversary Web site.

The full text of Rice's remarks is available on the State Department Web site. A Webcast of the address will be available on Princeton's Webmedia site.

Faculty debate war in Iraq and its consequences