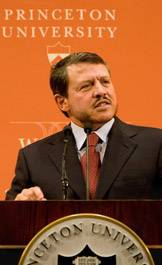 Speaking at Princeton University, King Abdullah II of Jordan called for the United States to assume a greater role in negotiations between Israel and Palestine, stressing that "time is running out" to secure peace in the Middle East. The king's Feb. 29 address in Richardson Auditorium followed his visit with U.N. Secretary-General Ban Ki-moon in New York and came before he headed to the White House to meet with President Bush.


Below: King Abdullah met with students at a reception following the address.

Warning that time for negotiating Israeli-Palestinian peace is running out, King Abdullah II of Jordan told a Princeton University audience Friday, Feb. 29, that the United States must take a stronger role in helping to resolve the conflict and secure the future of the Middle East.

"Yes, at long last, this year, right now -- we are in the best possible position to resolve 60 years of conflict between Israel and Palestine," Abdullah said in an address in Richardson Auditorium, Alexander Hall. "The Arab and Muslim states have committed to an unprecedented peace initiative. ... But time is running out, and we need the United States of America completely involved, to influence the course of discussions, monitor progress and help bridge the gaps to ensure a final agreement by the end of 2008.

"It is difficult to exaggerate how great the stakes are -- for Americans, for Arabs, for Israelis and indeed for the world," he said.

The king's talk in Princeton, which was sponsored by the Woodrow Wilson School of Public and International Affairs, followed his meeting with U.N. Secretary-General Ban Ki-moon in New York a day earlier. He is scheduled to meet with President Bush at the White House next week.

In her introduction of Abdullah, Princeton President Shirley M. Tilghman said, "He stands in the forefront of those who seek a peaceful resolution to the Arab-Israeli conflict that has divided the Middle East for six decades. Like his father King Hussein before him, he has been a voice of moderation in a region of the world where extremists often claim the headlines."

Abdullah stressed that the Bush administration must act now to guide an Israeli-Palestinian peace accord because currently there is strong support among Arab and Muslim countries for a two-state solution, and the region cannot afford to wait for another U.S. administration to take office to develop a long-term strategy for peace.

"America's involvement is a critical success factor of such a strategy. We need a strong authority that can act and act swiftly," he said.

While noting that there is opposition to U.S. involvement in the process both in the West and the Middle East, Abdullah argued that "historically, success in Middle East peacemaking was achieved when the United States stepped in and drove the negotiations.

"A victory by the enemies of peace, freedom, stability and moderation just cannot be an option," he said. "If we miss today's opportunities, peace will be set back, perhaps for decades. Extremists will continue to act. The forces for moderation and positive change will weaken. Global divisions will not only endure but also possibly deepen. Questioning of the West's effectiveness and commitment may grow. All of these will have consequences not only for my region but also for the world."

Abdullah drew attention to the growing proportion of young citizens in the Middle East as he called for greater cooperation between his region and the United States.

"Like American youth, Internet communications have given them an unprecedented view of the world," he said. "In their own region they see evidence in extremist messages of hatred and isolation. They see a lack of opportunities and an uncertain future. But they also see the prosperity and freedom that countries and regions in peace can offer."

"We must meet the expectations of this younger generation. In my region, we expect to need 200 million new jobs by 2020," he continued. "Creating these opportunities will require investment and partnerships to develop new infrastructure, meet energy and water needs, and improve public services and education. A strong cooperative Arab-American strategic partnership must be created."

"Speaking here today, I am especially aware of the role of scholars and students in making progress happen," he said. "Where others see unsolvable problems, you see paths that can lead to answers and successful action. This is the tradition of great scholarship of which you are a part."

Amaney Jamal, an assistant professor of politics whose research focuses on the Middle East, said that Abdullah's address reflected a "message of hope, but also alarm, in a sense, that something has to happen. The region cannot afford to wait another four years for a new administration to come into power and figure out what's going on before they start moving in this direction. In that sense, he's right on target."

Jamal noted that Abdullah is a strong voice for peace in the region. "Jordan is very much invested in the Arab-Israeli peace process, and Jordan is one of the United States' closest allies in the region -- it matters to take the Jordanian viewpoint extremely seriously on this issue," she said. "He's coming in the hope of being able to use that friendship and alliance to convince Congress and convince the administration to move forward on this issue."

Freshman Kofi Frimpong said he found Abdullah's address "very inspirational. I thought it was a great way to move forward and to show that in order to strengthen the Middle East as a whole we have to resolve this Israeli-Palestinian conflict. I'm currently in an 'Authentic Arab Voice' freshman seminar, and I've been learning a lot about that -- it was very interesting to hear him reinforce it."

Sami Yabroudi, a freshman who met the king after his talk during a reception with students, said Abdullah "was trying to bring everyone to the neutral, humanistic point of view and trying to motivate everyone, especially the young people."

An archived webcast of the lecture will be available on the Woodrow Wilson School's website.