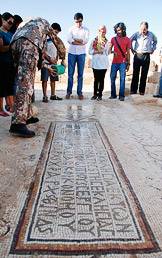 A dozen Princeton students traveled to Vienna, Austria, and to Jordan in July to immerse themselves in issues affecting international relations. The students attended an international conference on diplomacy and religion in Vienna, then traveled to Jordan, where they met with students and scholars on issues of religion, law and politics. The Jordan trip included cultural excursions, including this visit to an archaeological site in Rihab, where they viewed a Greek inscription about an ancient church. (Photo: Nealin Parker)

When King Abdullah II of Jordan met with Princeton students after delivering a lecture on campus in February, Jon Gandomi took the opportunity to open a dialogue that led him and other Princeton students on an inspirational visit to the king's country this summer.

At Abdullah's invitation, 12 current and recently graduated Princeton students traveled in July for a six-day visit with Jordanian students and scholars. In formal meetings and lectures and many informal, personal discussions, they explored the intersections of religion and politics and learned more about the similarities and differences of life in their respective countries.

The conference in Vienna included Princeton students and scholars as well as diplomats, religious figures and academics from around the world. (Photo: Nealin Parker)

The visit to Jordan was the second in a two-part trip designed to immerse the students in issues affecting international relations. It began with a three-day conference in Vienna, Austria, on "Religion, Diplomacy and International Relations," at which they interacted with scholars, diplomats and religious figures from around the world. Participants included Prince Turki al-Faisal of Saudi Arabia, Prince Hans Adam II of Liechtenstein, Hans-Ulrich Siedt, the German ambassador to Afghanistan, and Kasur Lodi Gyaltsen Gyari, a special envoy of the Dalai Lama. The conference was planned as the culmination of the past year's work of Princeton's Program on Religion, Diplomacy and International Relations (PORDIR), which sponsored the event.

The visit to Jordan, however, was more serendipitous, taking root when Gandomi and two other members of the University's Religious Life Council, a student organization, approached Abdullah following his Princeton address on the Arab-Israeli conflict. 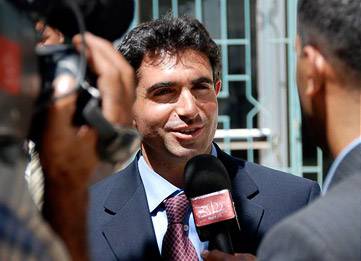 Recent graduate Jon Gandomi, who helped initiate the trip to Jordan by approaching King Abdullah during his visit to the University, was interviewed by a Jordanian television reporter covering the Princeton students' arrival. (Photo: Nealin Parker)

"We introduced ourselves as a Muslim and Buddhist and a Bahai who were all part of this interfaith council and, like him, were all working to try to build mutual understanding between faiths and try to reduce conflict in the world," Gandomi said. "He wanted to hear more about it, so he suggested that we come to Jordan to learn what they were doing in terms of conferences and dialogues and the way in which they were trying to build a society that was accepting of various types of beliefs."

"For people who are interested in politics, conflict and religion, there is no substitute for making a trip to the Middle East to talk to people who are living it," said Gandomi, who this spring completed his master in public affairs degree, with a concentration in international relations, from the Woodrow Wilson School of Public an International Affairs.

The students selected for the trips all were PORDIR fellows in 2007-08 and members of the Religious Life Council. The Jordan trip was sponsored by the Office of Religious Life and the Wilson School.

"The conference in Vienna allowed the students to reflect on how what they studied at Princeton could be applied in the practice of international relations. They were able to interact with diplomats from around the world to see how these ideas played out in a professional way and to present their ideas to this international body of experts," Raushenbush said.

"The trip to Jordan also provided interplay between what Princeton students learn in the classrooms and the real concerns and factors present throughout the world," he said. "We had a lot of time for discussion, and people were very moved by these experiences. The idea was to broaden their perspectives, to expand beyond their own context and include the context of other people." 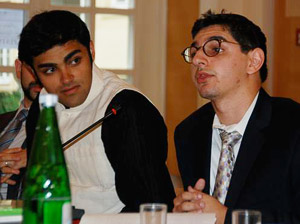 Junior Avi Miller (right) presented his research from Princeton's Program on Religion, Diplomacy and International Relations during the conference in Vienna as senior Manav Lalwani looked on. (Photo: Nealin Parker)

Zvi Smith, a senior majoring in politics, said, "The most important thing I learned from these trips is that people, no matter where you go, are complex, all societies are complex and, as a result, every way of life is infinitely nuanced. It serves me well to remember that in thinking about how to make this world a better place, I will only be able to do so if I have deepest respect for those I interact with."

The Vienna conference examined a range of perspectives on the influence of religion in the diplomatic process. Princeton students also presented research they conducted as PORDIR fellows on issues related to religion, politics and human rights in the Middle East, Europe, Asia and the United States.

The conference was in the tradition of the international gatherings of scholars and diplomats that Princeton's Liechtenstein Institute regularly organizes, but carried a special focus on bringing together participants representing different faiths and generations. It was organized by Miriam Schive, a 2006 Princeton graduate who serves as resident director of the newly founded Liechtenstein Institute in Vienna, which cosponsored the conference. Schive also worked with Austria's foreign ministry and the Diplomatic Academy of Vienna to organize the event, which included dinners for the Princeton students hosted in historic venues by the foreign ministry and the city of Vienna.

"One of the really special parts of the Vienna conference was the candid intergenerational discussion," said Tanya DeMello, who this spring completed her master in public affairs degree with a concentration in development studies. "You had people who have been working in the field all over the world on the front lines and students who are entering that realm and have studied the intersection of religion and politics. There was a real openness of discussion and frankness of dialogue and the sharing of information. The younger generation never felt as though we were only speaking once in a while -- we were really heard and listened to, and it was an open debate where people's points were valued." 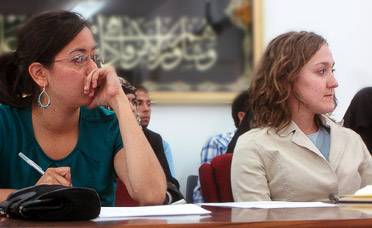 The students then embarked for Jordan, where they were hosted by Al al-Bayt University in the city of Mafraq for a series of lectures and forums with students and faculty in religion, law and politics.

While the Princeton contingent did not have an opportunity to meet with King Abdullah, their visit at his invitation was met with considerable fanfare, including a lead story on a national evening news broadcast as well as coverage in five newspapers.

"It definitely caught a lot of media play, which I didn't expect at all," Gandomi said.

Six Al al-Bayt students stayed with the Princeton students throughout their visit, which included excursions to the ancient city of Petra, an archaeological site in the city of Rihab and the Dead Sea. For the Princeton students, the time spent in deep discussions with their Jordanian peers, including Muslims and Christians, provided the most powerful reminders of the need for interfaith and intercultural understanding.

"All of the participants left not just with a connection to each other, but a sense of connection to Jordan that we didn't have before," DeMello said. "There was such a depth of interaction and honest discussion with the Jordanian students and those we traveled with through the country that a real sense of commitment was created."

DeMello said she learned the most "not from the formal sessions we had to discuss interfaith dialogue but from the experience of actually being in the country and witnessing how this worked -- everything from eating the local food with our hands together to seeing the great construction of Petra. And I learned so much from sharing life stories with Jordanian students and from the conversations in the breaks or over dinner where no one was taking notes." 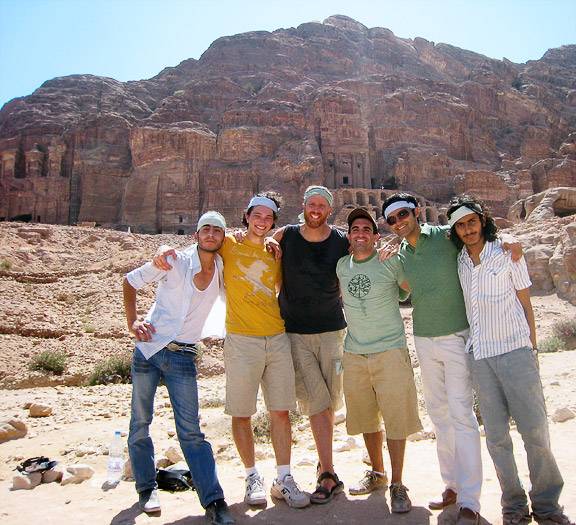 Smith added, "These trips have given new life to many ideas we talk about in school -- both at lunch and in the classroom. ... This has both deepened my appreciation for what I have learned and given me new ideas for how I want to live my life and interact with others."

The Jordan trip was among many initiatives by Princeton's Office of Religious Life to foster interfaith and intercultural understanding. Currently, Princeton students are on a two-week trip to Tanzania, sponsored by the office, to learn about religion, human rights and social change while meeting with leaders from Christian, Muslim and indigenous religious communities.

Raushenbush said the success of the Jordan trip has inspired plans by the Religious Life Council effort to invite students from Muslim countries to campus next spring to meet with Princeton students.

"One of the clear messages we got from the students in Jordan was this intense desire for people in the West to understand something about Islam -- that this idea of the clash of civilizations could be supplanted with this competing idea of the alliance of civilizations," he said.