Eight students have been named winners of the 2009 Spirit of Princeton Award, which honors Princeton University undergraduates for their positive contributions to campus life. The award recognizes students who have demonstrated a strong commitment to the undergraduate experience through contributions to student organizations, athletics, community service, religious life, residential life and the arts.

This year's winners were selected from a group of more than 50 nominations and will be honored with a book prize at a dinner on May 6. The award, which has been given annually since 1995, is sponsored by the University's Office of the Dean of Undergraduate Students. 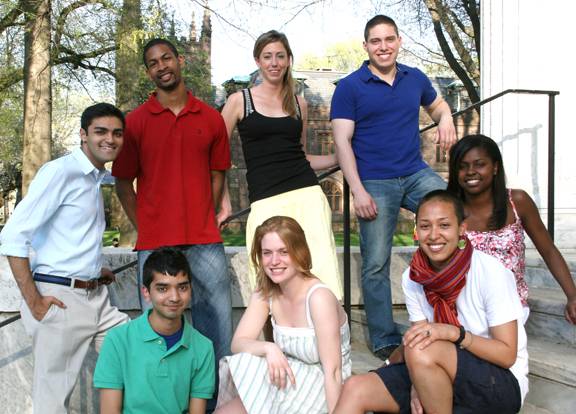 Here is information on the 2009 winners:

Junior Jose Joel Alicea of Plaistow, N.H., has served as the publisher of the campus publications American Foreign Policy, the Princeton Tory and Cornerstone, which he also founded. A politics major, he is an undergraduate fellow of the James Madison Program in American Ideals and Institutions. As a member of the American Whig-Cliosophic Society, Alicea helped organize a spring 2008 lecture by Supreme Court Justice Antonin Scalia. Alicea also is a member of the Anscombe Society student organization, which promotes discussions on campus about issues of marriage and family, and serves as a student representative on the Faculty-Student Committee on Discipline.

Senior Jackie Bello, a religion major from McLean, Va., has been an actor, director and stage manager for many campus theater productions. Bello served as the general manager of Theatre Intime and company manager of Princeton Summer Theater, and worked with other theater groups including the Princeton Shakespeare Company and Triangle Club. Bello founded the Theatre Intime Kids Initiative in 2007 to bring children's theater to the greater community. In addition, Bello played fullback on the women's rugby club team and the USA Rugby Women's National Under-19 Team. She also served as the Tower Club intramural sports chair and an Orange Key admission tour guide, as well as participated in the Student Volunteers Council Food TASK program and the Cotsen Children's Library Tiger Tales program. After graduation, she will teach in Baltimore through the Teach for America program.

Senior Adam Berry of Bel Air, Md., was a wide receiver on the varsity football team for four years and served as team captain. The economics major also worked with the Department of Athletics to improve recruiting strategies for black student-athletes. For his contributions to the football program, Berry received the Princeton Football Association's Hank Towns Award for mentoring young athletes and the Ronald Rogerson Award for providing inspirational leadership to his team. Berry also is a member of the Black Student Union's Leadership and Mentoring Program and Impact Christian Fellowship, and also serves as a "big sibling" with the Student Volunteers Council.

Senior Davion Chism, a politics major from Lancaster, Calif., has been a student leader particularly serving the black student community, serving as president of the Black Student Union, co-president of the Princeton Association of Black Women and volunteer with the Black Student Union's Leadership and Mentoring Program. During her freshman year she helped establish the Pan-African Graduation ceremony, which celebrates the achievements of graduates from the African diaspora. She also served this year as the Class Day chair on the Senior Commencement Committee. In addition, Chism dances with the Raks Odalisque Middle Eastern dance troupe, and is a member of the Undergraduate Student Government U-Council, a building supervisor at the Frist Campus Center and a CPR instructor for the Outdoor Action program.

Senior Parker Henritze, an Atlanta native, has earned All-Ivy awards as a member of the varsity women's volleyball team, including the 2007 Ivy League Player of the Year. She was captain of the volleyball team, president of the Varsity Student-Athlete Advisory Committee and an undergraduate representative on the NCAA Certification Committee. Henritze also volunteers as a coach for a middle school boys' basketball team and serves as an officer of Princeton Faith and Action. A politics major, Henritze is an officer of Tiger Inn and also has served as the chair of the Honor Committee and a member of the President's Advisory Committee on Architecture.

Junior Waqas Jawaid of Karachi, Pakistan, is a residential college adviser and serves on the Forbes College Council. He is a peer educator on lesbian, gay, bisexual and transgender issues, worked as the webmaster for the Pride Alliance and was the advocacy and reflection member of the Student Volunteers Council's Executive Board. An architecture major, Jawaid works for the Student Design Agency and is a cartoonist for the Daily Princetonian. He took this passion for art home to Karachi, where he led an art activity for children living in the landfill outside Karachi through emPOWER, an initiative for a renewable power station for the landfill. After his sophomore year, Jawaid was awarded the Martin A. Dale '53 Summer Fellowship, which he used to travel to Delhi and Paris to create a comparative painting and photography portfolio to illustrate how art can serve as a bridge between different cultures. Jawaid also serves on the President's Advisory Committee on Architecture and is an Orange Key admission tour guide.

Senior Manav Lalwani of Secaucus, N.J., was publisher of the campus publication American Foreign Policy, a student member of the University's Priorities Committee, a board member of the South Asian Students Association and a member of the Indian dance group Naacho. He also worked as a residential college adviser in Whitman College for two years. Lalwani helped organize the University's first Hinduism Week as co-president of the Princeton Hindu Satsangam and helped lead a multi-faith event in fall 2008 titled "Performing the Sacred" as a member of the Religious Life Council. Lalwani is a politics major and a candidate for certificates in political economy, East Asian studies and South Asian studies.

Senior Fiona Miller of Tucson, Ariz., is a peer educator on lesbian, gay, bisexual and transgender issues, served as co-president of Pride Alliance and worked as the LGBT Center's undergraduate intern. Miller was an officer of the Black Student Union, a member of the Black Arts Company and an Outdoor Action trip leader. A comparative literature major, Miller is a head fellow at the Writing Center and was a recipient of the Martin A. Dale '53 Summer Fellowship, which she used to organize, archive and document the artwork and personal papers of artist-collagist Earl B. Miller.