Eight students have been named winners of the 2010 Spirit of Princeton Award, which honors undergraduates at Princeton University for their positive contributions to campus life. The award recognizes eight seniors who have demonstrated a strong commitment to the undergraduate experience through dedicated efforts with student organizations, athletics, community service, religious life, residential life and the arts.

This year's winners were selected from a group of more than 90 nominations and will be honored with a book prize at a dinner on May 5. The award, which has been given annually since 1995, is sponsored by the University's Office of the Dean of Undergraduate Students. 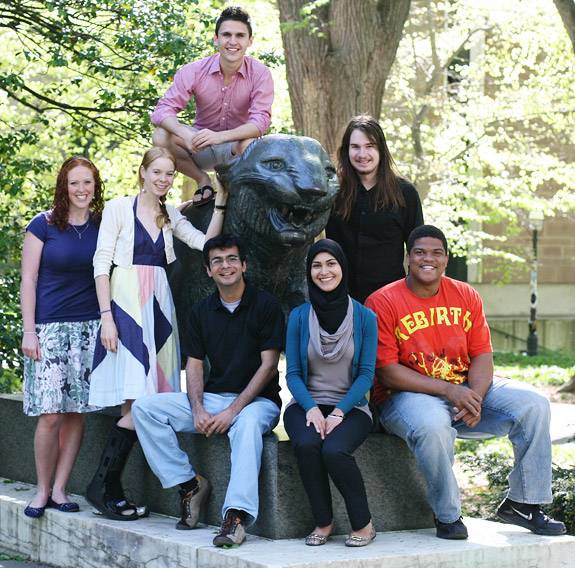 Here is information on the 2010 winners:

Muhammad Jehangir Amjad, from Rawalpindi, Pakistan, has worked to create awareness of Pakistani arts and culture. He is the founder of the student group Pehchaan and is a member of the Muslim Students Association. Amjad also has been involved with the International Relations Council, both as a delegate and as a conference leader. In Rockefeller College, he has served as a residential college adviser for two years and a residential computing consultant for three years. An avid cricketer, Amjad worked with other students to create an informal team that competed with Yale University and the University of Pennsylvania. He is majoring in electrical engineering and pursuing a certificate in engineering and management systems. He was elected to Tau Beta Pi, the Engineering Honor Society, and has worked as a teaching assistant for computer science and electrical engineering courses. Next year Amjad will be working for Microsoft Corp. as a program manager.

Sam Gulland is a major in the Woodrow Wilson School of Public and International Affairs from Aldie, Va. Gulland serves as the Princeton ROTC program's battalion commander, which is the highest-ranking student level in the Tiger Battalion. In this capacity, he leads the training of 40 cadets from Princeton, the College of New Jersey and Rider University, and prepares them for the U.S. Army Cadet Command Leader Development and Assessment Course. Also a dedicated sprint football player, he has been on the Princeton team for four years and was voted team captain for the last two. This year Gulland was active in an effort started by Princeton graduate and undergraduate students to help educate U.S. military veterans about the logistics of running for political office. He wrote his senior thesis on the practical impact of the decline in war veterans in the U.S. Congress. Gulland studied Arabic for the past three years in preparation for his military service.

Reilly Kiernan, of Pelham, N.Y., serves as the co-captain of the varsity cross-country team and has earned All-Ivy honors. She also runs for the varsity indoor and outdoor track and field teams and has earned an Academic All-American distinction. Kiernan has undertaken extensive service work at Princeton: She was the service chair of Forbes College, Tower Club and the Undergraduate Student Government, and she leads the Prospect Alliance for Community Action and the Varsity Athletes Charity initiative. As co-chair of the Pace Council for Civic Values, she worked with the Undergraduate Student Government to allocate funding to the January 2010 Inter-Action program, which took more than 100 students to Trenton for volunteer projects. Kiernan also is the associate editor for news for The Daily Princetonian. She serves on the executive board of the Orange Key Guide Service and is a member of the Alcohol Coalition Committee. Kiernan is majoring in sociology and pursuing certificates in American studies and urban studies. Next year she will work for the Foundation Center in New York City, connecting nonprofits with grants.

Jenni Newbury is a psychology major from Hillsborough, N.J.. During her sophomore year she started the Down Syndrome Conference as an opportunity for Princeton students to engage with children with the disorder. The conference is now an annual event with hundreds of student volunteers and is organized by the student organization she also founded, Princeton Disability Awareness. In addition, Newbury served as the Student Volunteers Council Board facilitator and led the Anchor House and Angel’s Wings weekly projects. She also organized the Communiversity Kids on Campus events and led a Community Action group. A participant in the Program in Teacher Preparation, Newbury has taught local first graders and also coaches a fourth grade basketball team at Dillon Gymnasium. She has worked at the Frist Campus Center Welcome Desk, takes part in the Princeton Evangelical Fellowship and serves as a dormitory assistant. Next year Newbury will be working at Special Olympics International.

Eric Plummer Jr., of Plainfield, N.J., is an economics major who has served as a role model not only as a residential college adviser in Butler College, but also as a successful athlete and participant in the black community. Plummer is the captain of the men’s varsity track team and has earned four Ivy League championships and two NCAA qualifications for shot put. He has been an intern for the Fields Center, co-president of the Black Men’s Awareness Group and treasurer of the Black Student Union and the Princeton chapter of the NAACP. Plummer has volunteered as an intern and project coordinator for Community House, is a family group leader of the Princeton University Mentoring Program and is the co-president of the Ivy Athletic Charity Team. He also has served on the Campus Club Advisory Board and as a trustee of the Hallelujah Worship Service.

Mariam Rahmani, from Kent, Ohio, is majoring in comparative literature and pursuing certificates in Persian language and culture, and European cultural studies. Rahmani has been the president of the Muslim Students Association and a co-convener of the Religious Life Council. She has worked to create a healthy environment for Muslim students through interfaith iftars, Eid banquets, the annual Fast-a-Thon and the creation of an alumni community group. With the University's Religious Life Council, she participated in a trip to India to study religious pluralism, spoke at the World Parliament of Religions in Melbourne, traveled to Tanzania in summer 2008 and participated in a Muslim-Jewish dialogue trip to Spain. Additionally, Rahmani served on the selection committee for the first Muslim chaplain at Princeton and for the new vice president of campus life. In her senior year, she spoke to the freshman class at "Reflections on Diversity" and is a residential college adviser in Butler College.

Gabriel Rodriguez, from Mexico and Rancho Cucamonga, Calif., has been a campus leader within the lesbian, gay, bisexual and transgender (LGBT) community. With the LGBT Center, he has served as an undergraduate intern, facilitator of the class of 2011 weekly support/discussion group, Pride Alliance publicity chair, peer educator and center employee. He was instrumental in organizing many Pride Alliance initiatives including Awareness Week, Pride Week, the Love = Love Valentine’s Day Program and Queer Articulations. In addition, Rodriguez was a student leader in the monthly "Queering the Color Line Family Dinners" for LGBT students, staff and faculty of color, organizing and facilitating many of the meetings. Rodriguez, an architecture major, is a residential college adviser in Wilson College and an Orange Key tour guide and publicity manager. He also is a dancer and artistic director for Ballet Folklórico, Princeton’s traditional Mexican folk dancing group.

Doug Sprankling, from Davis, Calif., is an English major with a certificate in English and American literature. A gifted humor writer, he has used his talents to revitalize the Forbes College InnFormer newsletter and write the comical halftime shows of the Princeton University Band. Sprankling is a member of the Forbes College Council and also served as an academic peer adviser and the Forbes intramural chair. In the band he plays the trumpet and has been drum major. Sprankling has participated in Outdoor Action all of his four years at Princeton, serving as a leader, first aid instructor and finally as one of the four trip coordinators, coordinating 93 trips for 744 freshmen. He also leads Orange Key tours and has served as the group’s historian, writing the "Guide for Guides." A member of the Princetoniana Committee, he organized the second annual freshman step sing held during orientation week, which has become a new Princeton tradition. He now is coordinating the 250th senior step sing for this year's Commencement.