Eight students have been named winners of the 2015 Spirit of Princeton Award, honoring Princeton University undergraduates for positive contributions to campus life. The award recognizes those who have demonstrated a strong commitment to the undergraduate experience through dedicated efforts in student organizations, athletics, community service, religious life, residential life and the arts.

This year's winners were selected from a group of more than 60 nominees and were honored with a certificate and book prize during a dinner held on May 6. The Spirit of Princeton Award is sponsored by the Office of the Dean of Undergraduate Students and has been given annually since 1995. 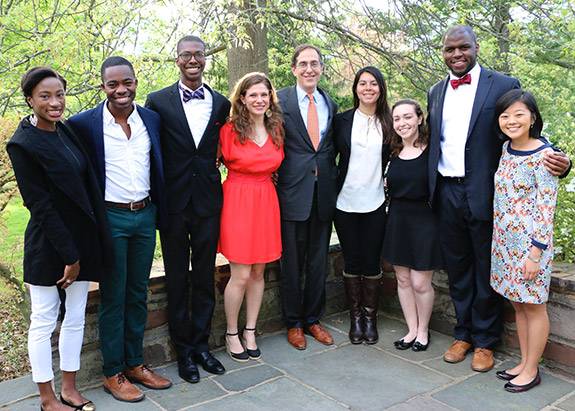 The 2015 recipients of the Spirit of Princeton Award are:

Joanna Anyanwu is a senior from Frisco, Texas, majoring in the Woodrow Wilson School of Public and International Affairs. She also is earning certificates in African American studies and gender and sexuality studies. She is a member of the track and field team, an intern at the Women*s Center, a Tom A. and Andrea E. Bernstein '80 Scholar as part of the Scholars in the Nation's Service Initiative, an activist in the student organization the Black Justice League, a coordinator for the Community Action freshman orientation program and the former co-chair of Princeton Against Sex Trafficking. Anyanwu is a member of Rockefeller College.

Christina Chica is a senior from Los Angeles majoring in sociology. She is a Lesbian, Gay, Bisexual, Transgender (LGBT) peer educator and has been an active member of the Princeton Dream Team throughout her four years on campus. She also teaches English as a second language at El Centro in Trenton, New Jersey. Previously, Chica was co-president of the Pride Alliance, worked at the Women*s Center, was co-director of advocacy for Students for Education Reform, worked at Murray Dodge Café, was part of the Princeton Equality Project and was a Mellon Mays Undergraduate Fellow. She is a member of Mathey College.

Azza Cohen is a junior from Highland Park, Illinois, majoring in history. Before her freshman year, she participated in the University's Bridge Year Program in India, where she volunteered for the organization Guria, which fights human trafficking through legal and educational intervention. On campus, she is a member of the Princeton Bhangra team, a leader and coordinator of Breakout Princeton, a worker at the Pace Center for Civic Engagement and an opinion writer for the Daily Princetonian, the student newspaper. She recently launched a mentorship project within the history department and released a documentary, "Specks of Dust," about the Guria organization. Cohen is a member of Forbes College.

Brandon Holt is a senior from Old Hickory, Tennessee, majoring in history with a certificate in African American studies. He is an active member of Princeton Model Congress serving as the director of policy and director of program his freshman and junior year, respectively. Holt served as student president of the Sexual Harassment/Assault Advising, Resources and Education program and as a member of the editorial board of the Daily Princetonian. He also was a member of the University's Priorities Committee and the Faculty-Student Committee on Sexual Misconduct. He is an activist in the Black Justice League, a support team member for the Outdoor Action freshman orientation program and a former member of the Princeton Mock Trial team. Holt is a member of Whitman College.

Joseph Laseter is a senior from Chicago majoring in psychology. He is a member of diSiac dance company, a senior photographer for the Daily Princetonian, a Frist Campus Center building supervisor and an Orange Key tour guide. During his time at the University, he also was co-coordinator of the Princeton chapter of Habitat for Humanity, president of the Minority Association of Pre-Health Students and the director of internal affairs for the Black Men Awareness Group. Laseter is a residential college adviser in Butler College.

Janie Lee is a senior from Walnut, California, majoring in the Woodrow Wilson School with a certificate in African American studies. She is a GED tutor in the Petey Greene Prisoner Assistance Program, the co-creator of a poetry and public speaking course at a correctional facility, a member of the Community-Based Learning Initiative and a Mellon Research Associate for the Princeton University Art Museum. During her time at Princeton, Lee also was co-chair for the Pace Center's Council for Civic Values, the advocacy director and president of Students for Education Reform, and the community service co-chair of Cap and Gown Club. Lee is a member of Rockefeller College.

Paul Riley is a senior from Bensalem, Pennsylvania, majoring in politics. He is president of the student-led Hallelujah! worship community and has traveled with the Office of Religious Life to Ghana. He is a member of the Undergraduate Student Government, serving on the Projects Board and as a U-Councilor. During his time at Princeton, he has been a Community House mentor and tutor, a board member and co-president of the Black Men Awareness Group, and a Breakout Trip leader through the Pace Center. Riley is a residential college adviser in Butler College.

Hannah Rosenthal is a senior from St. Louis majoring in politics with a certificate in African American studies. She is the founder and leader of Club Nom, an eating club/cross-eating option dialogue program. She is a fellow with Ask Big Questions, as well as the founder and leader of the Black Jewish Dialogue Initiative between the Center for Jewish Life and the Carl A. Fields Center for Equality and Cultural Understanding. She also is a Fields Center fellow, a student member of the Princeton Prize in Race Relations National Board, a French horn player in the Princeton University Wind Ensemble and the former director of external affairs for the Black Men's Awareness Group. Rosenthal is a residential college adviser in Wilson College.