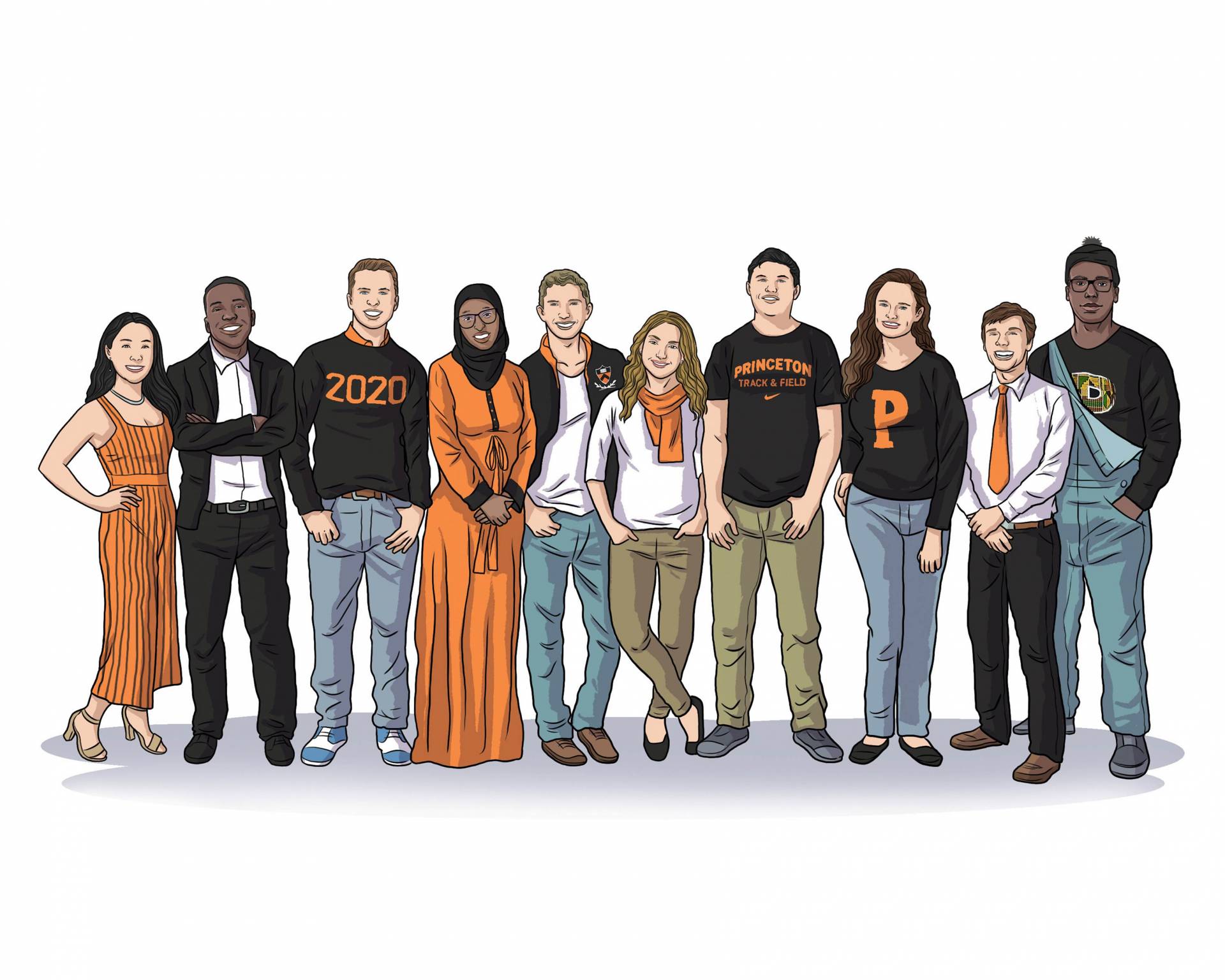 Claire Pinciaro, Office of the Dean of Undergraduate Students

Illustration courtesy of the Office of the Dean of Undergraduate Students

Ten students have been named winners of the 2020 Spirit of Princeton Award, honoring Princeton University undergraduates for positive contributions to campus life. The award recognizes those who have demonstrated a strong commitment to the undergraduate experience through dedicated efforts in student organizations, athletics, community service, religious life, residential life and the arts.

The selection committee received over 130 letters of nomination on behalf of outstanding undergraduate students. The Spirit of Princeton Award is sponsored by the Office of the Dean of Undergraduate Students and has been given annually since 1995.

The recipients of the 25th annual Spirit of Princeton award are:

Bozhidar (Bobo) Stankovikj is a senior from Skopje, North Macedonia, concentrating in the Woodrow Wilson School of Public and International Affairs and pursuing a certificate in environmental studies. Bobo’s love of conversation and community have influenced the many activities he’s been involved with on campus. Bobo welcomed customers as a barista in the Coffee Club, eased prospective applicants' fears as an Orange Key tour guide, and spoke competitively as an attorney on the Mock Trial team and as president of the International Relations Council. Bobo spent much of senior year serving as the Chair of the Peer Representatives, which is a group that defends students accused of academic integrity violations. Since his first year, Bobo has been the proud founder of the Macedonian Society at Princeton.

Caleb Visser is a senior from Williamsburg, Virginia, majoring in politics with a focus on international relations and earning certificates in African and Latin American studies. He served as the company commander of the Princeton Army Reserve Officer Training Corps (ROTC) and helped organize the Centennial Anniversary of ROTC at Princeton this past fall. Caleb also served two terms as the Campus and Community Affairs Chair for the Undergraduate Student Government, where he coordinated Communiversity and restaurant weeks. He is a campus organizer for Vote100, Politics Department undergraduate student representative, member of the Campus Life Leadership Council, and co-chair of the Class Day Committee as a part of the Commencement Committee. Recently, Caleb was named a Schwarzman Scholar. He is a residential college adviser (RCA) in Wilson College.

Jackson Artis is a senior from Plainfield, New Jersey, majoring in mechanical and aerospace engineering with certificates in Chinese language and robotics and intelligent systems. During his time at Princeton, Jackson was a member of Fuzzy Dice Improv comedy and will serve as the Fuzzy Dice Alumni Board Director upon graduation. He spent his senior year as the Co-Host of All-Nighter, Princeton’s first late night comedy talk show and was a member of a number of Theatre department thesis productions. He was a member of Princeton Christian Fellowship and the Cannon Dial Elm Club. Jackson was an active member of the Princeton Powerlifting team, competing four times and qualifying for Collegiate nationals three times. Jackson began his independent music career his sophomore year at Princeton, releasing 3 albums and 2 EPs and becoming one of the original members of the Meal Plan Collective. Jackson worked as a studio manager for the Ultraviolet Studio on campus. Jackson spent his last two years as a residential college adviser (RCA) in Rockefeller College, of which he is now a member.

Jacob Berman is a senior from New York City majoring in economics with certificates in finance and political economy. He was elected by his peers to serve as an Economics Department student liaison and served as vice-chair of the Julis-Rabinowitz Center for Public Policy and Finance. He led a Princeton Chess Club initiative to play chess tournaments against inmates at the only maximum-security prison in the state of New Jersey. He served on the Editorial Board of the Daily Princetonian and co-founded the Princeton Editorial Board. Jacob also served on the Chabad Board for four years and was the Advocacy Chair of Tigers for Israel. He served as an undergraduate fellow at the James Madison Program in American Ideals and Institutions, as a fellow at the Human Values Forum, and as a student affiliate with the Kahneman-Treisman Center for Behavioral Science and Public Policy. Having grown up partially in Cape Town, he served on the Executive Board of the Princeton African Students Association. He also competed as a member of Club Squash and Club Tennis, and placed 3rd in the Princeton University Ping Pong League.

Jonathan Haynes is a senior from Midland, Michigan, concentrating in Politics with a certificate in Values and Public Life. He has served as vice president of the Black Student Union, co-chair of Breakout Princeton, a student leader of Vote100, and co-founder of the Princeton Black Student-Alumni Coalition. He has also served as an undergraduate committee member for the Department of Politics, a member of the Governing Council of the American Whig-Cliosophic Society and co-chair of the Class Day Committee. Haynes also received the Martin A. Dale '53 Award in 2018 to study French cuisine. He works as a member of the Andlinger Center support staff, a student associate for the Liechtenstein Institute on Self-Determination, and as a blogger for the Office of Admissions. He is a Peer Academic Advisor in Butler College and member of Pink House.

Kelton Chastulik is a junior from Chambersburg, Pennsylvania, concentrating in the Woodrow Wilson School of Public and International Affairs and pursuing a certificate in values in public life. At Princeton, Kelton has been deeply involved with the Pace Center for Civic Engagement, acting as the Co-Chair of the Student Volunteers Council (SVC) executive board, a Community Action (CA) Fellow, a Service Focus Member, a Pace Council for Civic Values member and a Breakout Local Participant. He is also a member of the Men’s Track and Field Team. Kelton is also a Princeton Access and Inclusion Community Ambassador and a residential college adviser (RCA) in Whitman College. Using the knowledge and experience he’s gained at Princeton, Kelton also directs a community organization which donates gently used books to underserved populations in his hometown. Most recently, Kelton was selected to represent Princeton for the 2020 Davis Projects for Peace award.

Meghan Slattery is a senior from Bayport, New York, concentrating in operations research and financial engineering with certificates in Arabic, finance, and technology and society. She is a member of the Women’s Swim and Diving team and served as president of Cloister Inn and the Interclub Council. She is a leader trainer and canoe trip leader with Outdoor Action and served on the Student Orientation Advisory Board. She has served as co-president of the Engineering Council, where she organized the annual SEAS Teaching Awards, and also was a BSE first-year interactor. She was a coordinator of Princeton’s Special Olympics Swimming program and organized the Teams and Toys service project with Athletes in Action. She was selected as a 2019 intern for the Scholars in the Nation’s Service Initiative (SINSI), and is also a member of the Princeton Online Tutoring Network and Whitman College.

Sirad Hassan is a senior from Frederick, Maryland, majoring in the Woodrow Wilson School for Public and International Affairs, and pursuing certificates in African American studies, African studies, cognitive science, and global health and health policy. She is a peer academic advisor (PAA) at Whitman College, a SHARE peer, and a Community Action leader. She has co-led a breakout trip about mental health access in Boston, MA through the Pace Center for Civic Engagement and co-facilitated a philosophy course with the Prison Elective Project. She was a member of the Religious Life Council and served on the Princeton University Muslim Student Association (MSA) executive board for two years, once as Communications Chair and once as President. As part of her work with the MSA, she helped spearhead an InterMSA summit on inclusivity and representation in the Muslim community. She is a recipient of the Deeply Rooted Emerging Leaders Fellowship, sponsored by the Muslim Wellness Foundation. Most recently, she was a quarterfinalist on the televised Jeopardy! College Tournament.

Tabitha Belshee is a senior from Escondido, California, majoring in Politics with certificates in statistics and machine learning and American studies. She is a member of the Freshman Scholars Institute (FSI) '16, a proud Wilson residential college adviser (RCA), and an SML 201 teaching assistant. She participated in the Princeton Hidden Minority Council (later renamed FLiC) and the Scholars Institute Fellows Program (SIFP). Tabitha served on the RCA Training Committee, as head tutor of both R-Programming and POL 345 at the McGraw Center for Teaching and Learning, and as an officer at Quadrangle Club. Tabitha was presented with a Profiles in Curiosity "Un-Award" as a junior and she enjoyed teaching yoga in Dillon Gym every Sunday afternoon.

Toni Xu is a senior from San Francisco majoring in history. She is currently a member of the Last Lectures team within the Class of 2020 Commencement Committee. On campus, Toni has served as the co-president and cultural advocate of the Asian American Students Association (AASA), co-president and assistant artistic director of the Princeton HighSteppers, co-organizer of the Night Market, and an organizer of the Art and Activism event in collaboration with the Princeton Art Museum. Toni is a member of the Cap and Gown Club and Forbes College.