Nine students have been named winners of the 2014 Spirit of Princeton Award, which honors undergraduates at Princeton University for their positive contributions to campus life. The award recognizes students who have demonstrated a strong commitment to the undergraduate experience through dedicated efforts with student organizations, athletics, community service, religious life, residential life and the arts.

This year's winners were selected from a group of more than 100 nominations and will be honored with a book prize at a dinner on May 7. The University's Office of the Dean of Undergraduate Students sponsors the award, which has been given annually since 1995. 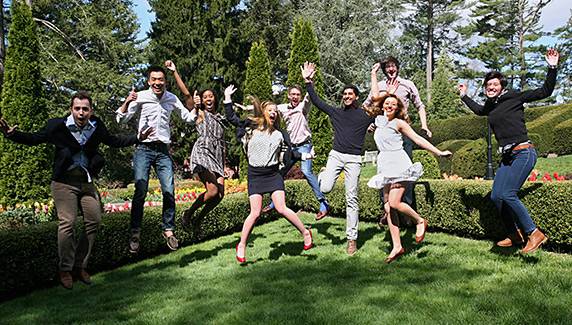 Nine students have been named winners of the 2014 Spirit of Princeton Award, which honors undergraduates at Princeton University for their positive contributions to campus life. (Photo courtesy of the Office of the Dean of Undergraduate Students)

Ray Chao is a junior from Arcadia, California, majoring in the Woodrow Wilson School of Public and International Affairs. He is a member of the American Whig Cliosophic Society, and has served as captain of the mock trial team and treasurer of the Asian American Students Association. He also has been a leader and coordinator of Breakout Princeton trips through the Pace Center for Civic Engagement.

Estela Diaz is a senior sociology major from Baldwin Park, California. She has worked at the Women's Center since her freshman year, served as the co-president of Princeton Pride Alliance since her sophomore year and served as a Lesbian, Gay, Bisexual, Transgender (LGBT) peer educator. She has been a mentor for Latinos Unidos Networking and Advising, as well as for the One on One Tutoring program.

Sara Figel is a senior from Manhattan Beach, California, majoring in the Woodrow Wilson School. She is an Orange Key tour guide, a student representative on the Committee on Discipline, a residential college adviser in Rockefeller College, treasurer of Cap and Gown Club, artistic director of Fuzzy Dice improv comedy troupe and a Writing Center fellow.

Jenesis Fonseca-Ledezma is a senior English major from Los Angeles. She is the president of Ellipses Slam poetry, co-founded CityStep Princeton, is a student coordinator with the One on One Tutoring program and is a mentor through the Princeton University Mentoring Program.

Adam Mastroianni is a senior psychology major from Monroeville, Ohio. He is a member of the comedy group Quipfire!, co-founded Princeton's first and only late-night talk show "All-Nighter," served as a residential college adviser in Whitman College, is co-chair of the communications committee for Whitman College, serves as a Writing Center fellow and is a senior cartoonist for the Daily Princetonian.

Matthew Vengalil is a senior psychology major from Grosse Point Farms, Michigan. He is the secretary of the Student Health Advisory Board, head of the South Asian Lesbian, Gay, Bisexual, Transgender (LGBT) activism group Queer Desi Tigers, and an LBGT peer educator. He has served as treasurer of Princeton Pride Alliance and was an editor and writer for Princeton Asia Review.

Benny Wagstaff is a senior from Washington, D.C., majoring in the Woodrow Wilson School. He has served as the social chair of the International Student Association and the Undergraduate Student Government. He plays polo, is a member of the Chapel Choir and started Coffee Chats, a program where five random students come together as a group to meet and discuss different topics.

Tiana Woolridge is a junior from Sherman Oaks, California, majoring in the Woodrow Wilson School. She is a member of the varsity women's volleyball team and volleyball representative for the Varsity Student-Athlete Advisory Committee. Woolridge is a member of the Student Health Advisory Board, vice president of the Minority Association of Premedical Students, and founder and chair of the Student-Athlete Service Council. She was selected as a student-athlete representative for the Athletic Director Search Advisory Committee.

Trap Yates is a senior from Sutton, Massachusetts, majoring in history. He has served as a coordinator and leader of Breakout Princeton trips, a residential college adviser in Wilson College and director of Supreme Court for Princeton Model Congress. He has been a member of the Undergraduate Student Government's social committee and chair of the campus and community affairs committee.