Eight students have been named winners of the 2011 Spirit of Princeton Award, which honors undergraduates at Princeton University for their positive contributions to campus life. The award recognizes seven seniors and one junior who have demonstrated a strong commitment to the undergraduate experience through dedicated efforts with student organizations, athletics, community service, religious life, residential life and the arts.

This year's winners were selected from a group of more than 120 nominations and will be honored with a book prize at a dinner on May 2. The award, which has been given annually since 1995, is sponsored by the University's Office of the Dean of Undergraduate Students. 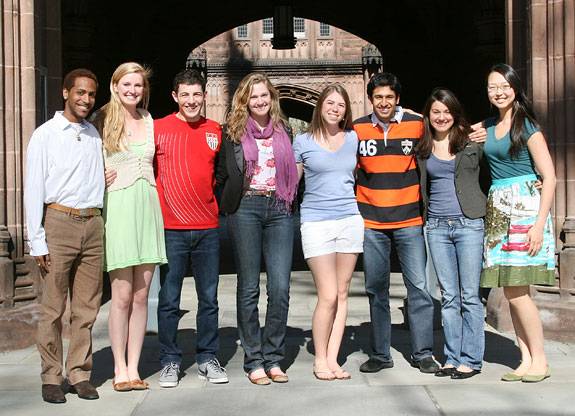 Here is information on the 2011 winners:

Nikhil Basu Trivedi, a senior from Atherton, Calif., is majoring in molecular biology and earning a certificate in finance. For two years he served as co-president of the Princeton Entrepreneurship Club, which he helped grow to include more than 1,000 students, alumni, faculty and administrators. He helped expand or implement various entrepreneurship programs and initiatives, including the competitions Princeton Pitch and TigerLaunch, a curriculum for students and a speaker series. He also helped create mentorship opportunities, such as the formation of the Idea Factory sessions, so that students can gain feedback for their endeavors. Beyond his commitment to entrepreneurship, he is a peer adviser in Butler College, the technology chair for Cap and Gown eating club and a tour guide for the Orange Key campus tour service. He has performed with the Princeton South Asian Theatrics and has served as the Butler College Council co-chair. As a member of the Senior Class Commencement Committee, he is responsible for planning and organizing celebrations for Class Day.

Elizabeth Borges, a senior from Washington, D.C., is majoring in psychology and pursuing a certificate in American studies. Through her work with the Alcohol Coalition Committee (ACC) and the Lesbian, Gay, Bisexual, Transgender (LGBT) Center, she has led campuswide discussions and initiatives to promote student health, well-being, tolerance and understanding. She served as the student co-chair for the ACC, a committee of students, faculty and staff that works to address high-risk drinking. As part of her responsibilities, she helped plan, organize and direct an Ivy League workshop where student leaders came together to share ideas and initiatives regarding high-risk drinking. She also co-chaired an ACC subcommittee that recommended updates to Princeton's alcohol policy. As an LGBT Center intern, she performed a qualitative study to identify the current needs of LGBT students and sparked dialogue through her participation in Princeton's "It Gets Better" video and other campus programming. In addition, she has led discussions about diversity as a moderator for Sustained Dialogue, served as a guide for Orange Key and helped coordinate Princeton's Manicure for the Cure. This summer she will be a teaching intern at Phillips Exeter Academy, and in the fall will begin work as a research assistant at Harvard University's Kennedy School of Government investigating women and leadership.

Claire Cole, a junior from Waco, Texas, is concentrating in psychology. She serves on the national team of Students for Education Reform (SFER), a nonprofit organization that was founded at Princeton in 2009. She coordinated SFER's three-day national summit and has served as the organization's communications director. Stemming from her personal interest in education leadership, she is committed to engaging with other students in learning how to affect change, and started a campuswide student leadership training program called Leadership for Change. She has interned with the Program in Teacher Preparation, a position that she proposed and designed. As a campus leader, she is a residential college adviser, an Outdoor Action leader and a Breakout Princeton coordinator through the Pace Center for Civic Engagement. Last year she was the editor-in-chief of the Bric-A-Brac yearbook and president of the Texans Club. She has led a weekly project with the Student Volunteers Council, and served as a summer intern with the Princeton Internships in Civic Service program.

Samuel Dorison, a senior from Longmeadow, Mass., is concentrating in the Woodrow Wilson School of Public and International Affairs, for which he currently serves on its student advisory committee. He has spent a semester at the University of Oxford, and, over the course of two summers, volunteered as a tutor in South Africa and worked with a lawyer in Washington, D.C., on legal cases involving detainees at Guantanamo Bay, Cuba. This work ultimately provided him the opportunity to travel to Guantanamo and sparked the main idea for his senior thesis. He has served as the chair of the College Council of Whitman College and as the vice president of the Undergraduate Student Government (USG). In addition, he has covered sports for The Daily Princetonian student newspaper and has served as a guide selection officer for Orange Key. He is a member of the Honor Committee, an economics tutor at the McGraw Center for Teaching and Learning and one of the co-chairs for the class of 2011's Annual Giving Campaign.

Kadeem Gill, a senior from Brooklyn, N.Y., is concentrating in psychology and earning certificates in African American studies and dance. A committed artist, he has taken on leadership roles with student performing arts organizations including BodyHype, DiSiac and the Black Arts Company: Dance. He also has performed with the Princeton University Gospel Ensemble. Since his sophomore year, he has served on the board, including as president, of the Performing Arts Council, an umbrella organization that represents the interests of many of the campus' performance groups. He has been a mentor through the Leadership and Mentoring Program, assisted with publicity and DJ recruitment for BlackBox, Inc. and worked as a student manager at the Frist Campus Center. He also participated in three Community-Based Learning Initiative class projects, tutoring at a halfway house in Trenton and leading dance workshops for children. He is co-chair of the 2011 Pan-African Graduation, which celebrates the achievements of Princeton graduates from the African diaspora, working with the Fields Center for Equality and Cultural Understanding to coordinate the event. After graduation he will begin a two-year commitment with Teach for America, teaching high school English in the Mississippi Delta.

Jennifer King, a senior from Greenwich, Conn., is concentrating in computer science and pursuing a certificate in information technology and society. A three-year starter on the varsity field hockey team, she has earned numerous accolades as a scholar-athlete, including a spot on the All-Ivy Academic Team as a junior. An avid singer, she performed the U.S. national anthem before home games and later joined the University Glee Club to develop her talents. To inspire her peers, especially women, to explore the sciences, she helped launch two student organizations, the Princeton Student Chapter of the Association for Computing Machinery and Princeton Women in Computer Science. Last year she used her computer science skills to formulate a business plan, with classmate Caroline Clark, to develop an online option for speech therapy with the goal of reducing the cost of teaching people how to adjust to and use cochlear implants. The plan tied for first place at the 2010 TigerLaunch Entrepreneurship Competition. After graduation, she will work as a software engineer at Google.

Genevieve Ryan, a senior from Potomac, Md., is a politics major who has participated in a wide range of campus organizations. As a founding member of the Circle of Women, she coordinated communications with volunteers and organizations in an effort to build schools for girls in developing countries. During the 2009 intercession break she participated in a Student Volunteers Council trip to Galveston, Texas, to help the area rebuild after Hurricane Ike. She was a co-president of Princeton Against Cancer Together, a campus charitable group with a membership of more than 250 students. As a member of the Honor Committee, the Eating Club Task Force and the Alcohol Coalition Committee, she has worked to enhance her peers' academic and social experience. She has been the vice president of the Cottage Club eating club and social chair of the women's lacrosse club. She currently is an Annual Giving captain for her class.

Jane Yang, a senior from Ypsilanti, Mich., is a chemical and biological engineering major pursuing certificates in engineering biology and sustainable energy. As a member of Engineers Without Borders -- an organization she has led as co-president -- she traveled to Ashaiman, Ghana, in 2009 to help build a community library. She also conducted a range of interviews with residents, and shared some of their stories visually through a photo exhibit in Rockefeller College. Her work in Ghana was supported by a Martin Dale Summer Award. In addition, she has helped inspire the next generation of engineers by co-coordinating programs for Princeton Engineering Education for Kids, an outreach program that teaches robotics and basic engineering principles to local students. She also co-founded Princeton's chapter of the International Association for Hydrogen Energy and helped develop a portable hydrogen generator. Beyond engineering, she is a head fellow at the Writing Center and was a co-leader of the Student Volunteers Council's American Red Cross and Hats for the Homeless organizations. She also has served as a member of the Pace Center's Student Steering Committee, the Steering Committee on Undergraduate Women's Leadership and Peak Potential, a mentoring program for children with disabilities. Additionally she participated in creating an online student guide with the USG and blogged for the class of 2014 admitted students website. After graduation she will work for the International Rescue Committee in Kenya through Princeton in Africa before joining Deloitte's federal consulting program with the goal of pursuing a career in international development.